TerraN_EmpirE said:
That would require a massive overhaul of the tanks. Installing A PS is not like plugging in your phone charger.
Click to expand...

Not necessarily, an APS is usually designed to be able to fit onto all vehicles with minimal fuzz. Most of the equipment are installed externally, with only the ballistic computer requiring some in depth installation.
There is some effort to put it, but not to the level of serious upgrades.

You also need the vehicle to produce the proper electric power load to power the whole thing. And to fit it to the vehicle in a manner that allows out to take the shock of the vehicle in motion. It's so able but needs a modern tank
D

TerraN_EmpirE said:
You also need the vehicle to produce the proper electric power load to power the whole thing. And to fit it to the vehicle in a manner that allows out to take the shock of the vehicle in motion. It's so able but needs a modern tank
Click to expand...

Considering how the most power demanding equipment (ballistic computer and radar) can be charged by connecting it to the main tank power plant or its own power plant I don't see that as a problem, nor are these thing particularly power demanding in anyway.
The concern of the system shocking the vehicle is even less of a concern, even the lightest IFV weighs 25 tons. And by principle, all current APS use minimal force to defeat the incoming chemical based projectile. Now if the projectile was a kinetic penetrator that will be a problem, but APS was designed to defeat HEAT based rounds in the first place anyway.

Other way around tracked vehicles are notorious for vibration which can cause issues with electronic devices and people.
D

TerraN_EmpirE said:
Other way around tracked vehicles are notorious for vibration which can cause issues with electronic devices and people.
Click to expand...

True, but its not like this is an inherent problem to be found only in APS, military systems are designed to handle things way worse then that. Unless the vehicle is being flipped over continuously, the APS should work fine.

Jura said:
... I'm guessing the main Russian concern is the Javelin: I'd expect it to blast any Separatists' tank (= former Ukrainian tank, right?) just like that
Click to expand...

now noticed, at an important Russian unofficial site, the blog post like
Trump Approved The Sale Of Javelin Anti-Tank Missiles To Ukraine

Please, Log in or Register to view URLs content!
with above the average number of comments below it (I'm not in the mood to go through these) 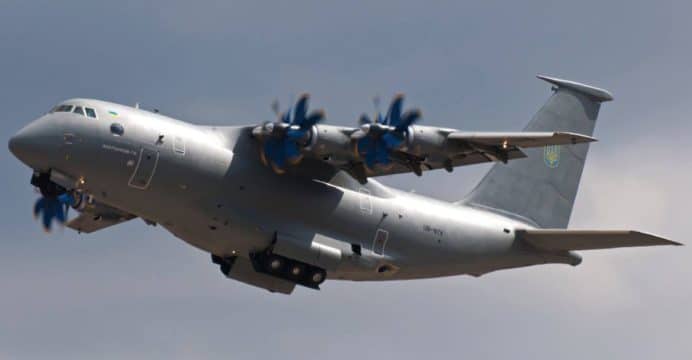 Antonov
Please, Log in or Register to view URLs content!
on December 22 that it had reached agreements with Aselsan that could see Aselsan integrate its avionics subsystems, such as auto-pilot system, to Antonov’s aircraft.

On December 20-21, Antonov – which is under Ukraine’s UkrOboronProm – and the Turkish electronics supplier Aselsan conducted meetings at the Istanbul Technical University (ITU).

Following those meetings, the two companies signed a set of agreements outlining potential integration work for Aselsan onboard Antonov aircraft.

This meeting follows a memoranda-of-understanding (MoUs)
Please, Log in or Register to view URLs content!
by Antonov with Aselsan, Havelsan and Turkish Aerospace Industries (TAI) in at the 2017 International Defence Industry Fair (IDEF) last May.

In their MoU, Antonov and Aselsan agreed to form working-groups to explore potential areas of bilateral cooperation, which included the prospect of integrating Aselsan subsystems to Antonov’s An-158 airliner and An-178 military transport aircraft.

Interesting, I wonder if Turkey might be also formulating its own Antonov buys later. Currently they have new A400Ms on order but at best those would only replace there old C130s some of Antonov's smalller transports could replace there old C160 Transtols as well as more directly the C130s. If that happened it would be a major windfall for The Ukrainian firm and a foot in the door for other possible NATO sales.

It's to much gun. the round which is the same as the M2 Browning and was used in world war 2 fighters produces such an effect that a near miss would induce hydroshock. that means that a near miss is potentially lethal.
Click to expand...

The hydroshock claim has been widely disputed, and I have serious doubts about it.

The round is simply too small, to have a lethal hydroshock effect would require the round to be extremely draggy to create a negative pressure cone big enough to have that effect. That would in turn mean the round would have very poor range and ballistic properties.

You need a far bigger round for hydroshock kills to be possible with an aerodynamic projectile.

Yeah I have to admit I was wrong, there was a recent incident where a doctor made the claim. Turns out the guy actually got his target. Still of all the "small arms" rounds one could get hit with this one is still pretty nasty and not one likely to be survived.
In the end though as Lethal aid goes, the more credible threat is the Javelin missiles.
You must log in or register to reply here.