Two Type 055 large destroyers, the Nanchang and the Lhasa, are moored at a naval port in 2021. File photo: Courtesy of the Chinese People’s Liberation Army Navy

The Chinese People's Liberation Army (PLA) Navy's second Type 055 large destroyer, the Lhasa, recently passed a full-course training assessment that comprehensively tested the vessel's air defense, maritime attack and anti-submarine capabilities in mock battles, with experts saying on Sunday that the warship with more than 10,000 tons of displacement is 100 percent ready for far sea missions beyond the first island chain.

Organized by a vessel training center attached to the PLA Northern Theater Command Navy, the assessment put the Lhasa, together with three Type 056A corvettes, through a three-day maritime test at an undisclosed region in the Yellow Sea, China Central Television (CCTV) reported on Sunday.

In order to make the tests more challenging and realistic, other surface vessels, submarines, early warning aircraft and helicopters joined the assessment either as mock enemies or as friendly forces, CCTV reported, with scenes showing a Z-9 helicopter taking off from the flight deck of the Lhasa, and what seems to be a Type 052D destroyer sailing not far away, although it was not fully distinguishable due to heavy sea fog.

With the completion of the full-course training assessment, the Lhasa is now at 100 percent in terms of combat capability, with the crew well integrated with the ship's advanced weapons and equipment, Wei Dongxu, a Beijing-based military expert, told the Global Times on Sunday.

This is demonstrated by the participation of other vessels and aircraft, as they can help examine the Lhasa's capabilities in facing real targets and test its coordination with other elements in joint combat, Wei said.

As the PLA Navy's second out of eight currently launched Type 055s, the Lhasa entered service in
Please, Log in or Register to view URLs content!
.
The Type 055 is a large ship designed to carry out missions in far seas beyond the first island chain, Wei said.

Analysts predict that the Lhasa will follow the steps of the Nanchang, the first hull in the Type 055 class, and start far sea voyages and join aircraft carrier groups this year.

With its outstanding situational awareness capabilities and a whopping 112 vertical launch missile cells capable of launching a combination of surface-to-air missiles, anti-ship missiles, land-attack missiles and anti-submarine missiles, the Type 055 is widely believed to be one of the more powerful surface vessels in the world.

Registered Member
Once again, this antenna.

The antenna consists of a flat panel multiple T/R arranged in a grid. You might call it an AESA if its a radar, but as a telecom array, this is a MIMO.

Very high data rate either to a satellite or high flying UAV or both, like an internet. The LEO satellite or HALE would be acting like a router or hub connecting several ships in a network.
Last edited: Monday at 10:50 PM 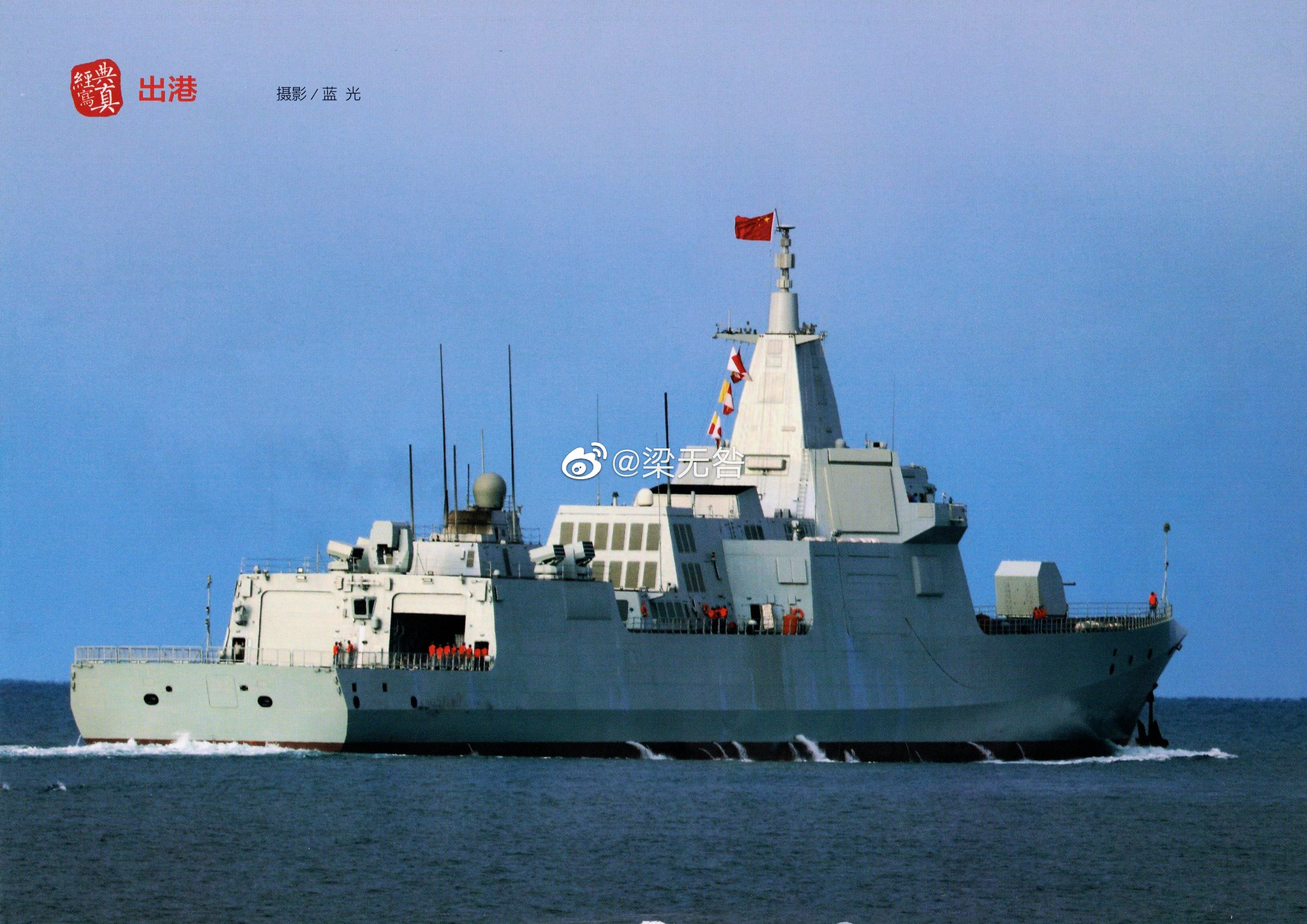 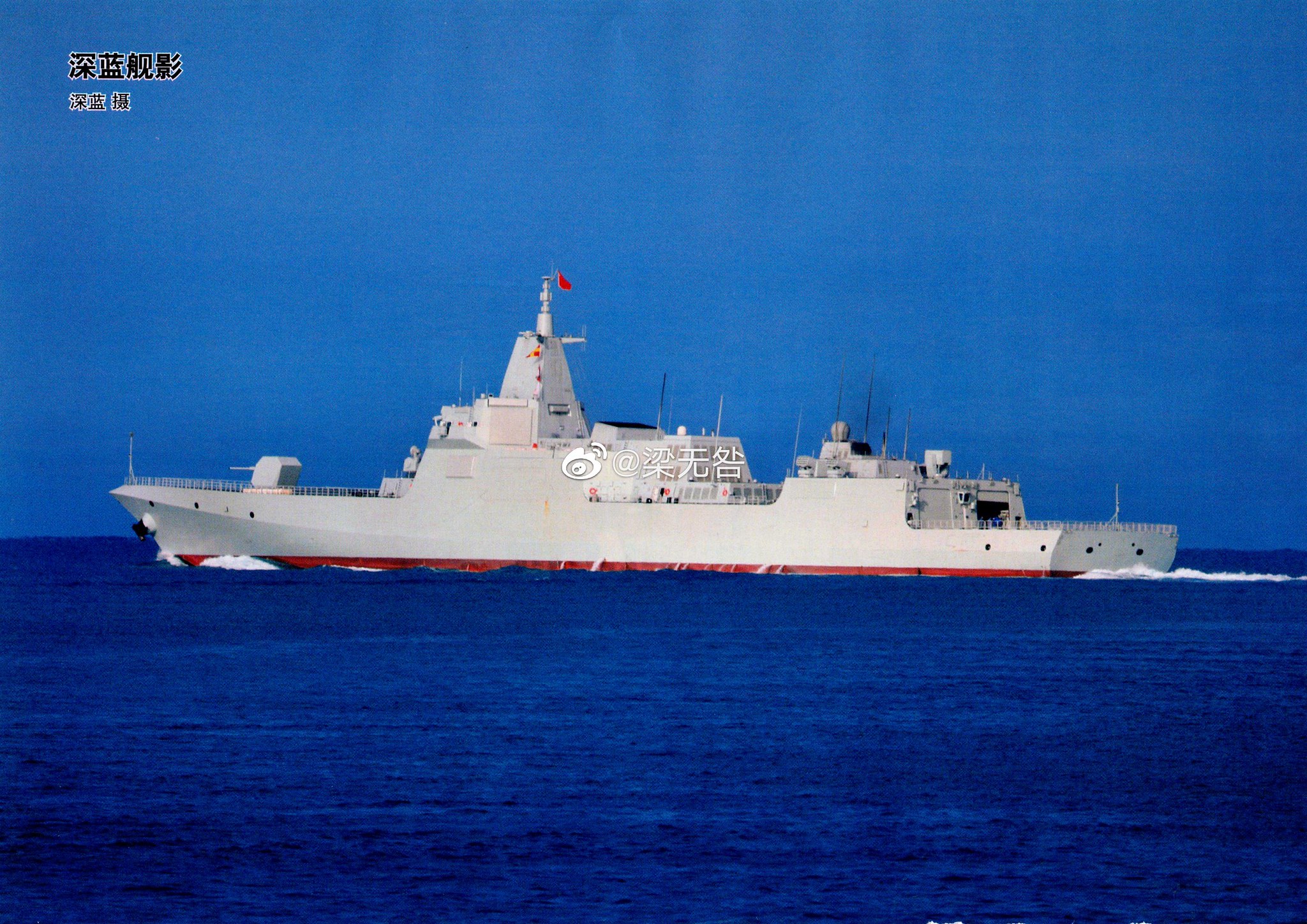 Tam said:
Once again, this antenna.

The antenna consists of a flat panel multiple T/R arranged in a grid. You might call it an AESA if its a radar, but as a telecom array, this is a MIMO.

Very high data rate either to a satellite or high flying UAV or both, like an internet. The LEO satellite or HALE would be acting like a router or hub connecting several ships in a network.
Click to expand...

As early as 3G. The tech is only getting more sophisticated, but principle remained the same.

However, in cellular network, I doubt they use the solid state TR modules like military and other high end civilian applications.
T

Same antenna tech used with 5G. In radar aesa, a module takes the form of a pcb, where phase shifters, amplifiers, dsps, d/a and a/d converters take the form of separate chips. The layout appears like a brick wall. In a flat panel, the entire array is a single pcb, and each module is a single chip, and all components for a module, like phase shifter, amps, dsp, are integrated as part of a single chip.

As the antenna operates like a 5G mimo, it can communicate with an X number of satellites and perhaps UAVs and aircraft simultaneously instead of one at a time. The ship still has the older satcom next to the circular one, these traditional satcom uses a single parabolic dish meant to communicate with a single target at one time. The ship also has a small traditional satcom likely with a different band for another satellite.

Traditionally, PLAN warships have a larger and a smaller satcom. The larger one I assume is S band and the smaller one a Ku/ka/k band. Each talks to a different satellite constellation. This was followed by a third satcom, which is not a replacement for the other two, and is retrofitted in most ships. Since its not a replacement, the third satcom communicates with a new satellite constellation.

The circular satcoms were introduced also but without replacing any previous satcoms, which means it communicates with yet another entirely new satellite constellation different from the other three. A typical Type 054A, even the older ships, would first feature the first two satcoms, but in recent years, would fit all four over their hangers. The circular satcom is sometimes fitted on top of the bridge in some ships, but in other ships of the same class, it's fitted on top of the hanger. It can be seen with ships as big as the 055 and yet as small as the 056A.

There's a lot of dense and very high speed networking going on with multiple layers of satellites and possibly with male and hale uav support. What exactly are the applications behind them you can only guess.
C

Registered Member
How likely is it that the large arrays on the side of the hull are some sort of OTH radar setup with one set transmitting and one receiving? Two key radar suites 055s got rid of compared to the 052D are Type 366 and Type 517, a large pair of OTHR arrays could fulfill the capabilities of OTH search and sea-skimming missile detection, etc.
T

Cloud_Nine_ said:
How likely is it that the large arrays on the side of the hull are some sort of OTH radar setup with one set transmitting and one receiving? Two key radar suites 055s got rid of compared to the 052D are Type 366 and Type 517, a large pair of OTHR arrays could fulfill the capabilities of OTH search and sea-skimming missile detection, etc.
Click to expand...

The ones on the side of the hull should be ECM. As jammers they correspond to similar devices placed on the same area and position as other PLAN vessels, and with most modern naval warships in general, like Arleigh Burke, etc,. The reason why ECM is placed low and towards the center of the ship is that it anticipates where antship missiles are most likely to head and strike on the ship, and the ECM is going to be there the closest. You see that in how in the Shandong, the ECM is placed in the hull whereas the Liaoning, following the older Soviet style plans, have the ECM on the island. Likewise in the 075, both ECM are placed in the hull and right square in the middle of the ship.

For ECM, these are huge panels. They must have plenty of power, and if they are AESAs on their own, they might be able to generate multiple beams that can be used to soft kill antiship missiles on a saturation attack.

I expect this ECM system to be used on other ships. The first is on 003. The difference is they are now placed back on the island. Two on each sides of the island near where you expect the ship's digits are, then another facing in the front and the fourth panel facing the back. The panels are placed on an 0, 3, 6, 9'o clock positions. No, I don't think these are radars on the 003. So far the radars on the 003 are placed in quadrants at 45 degrees, and there are already eight radars in total. You have four large S-band radars, followed by four smaller X-band radars, both of these sets are also coming from the 055.

The next is that they may appear on the 054B. As such, its back to two panels and both should be located on the sides of the hull and under the bridge wings.

As far as OTH goes, they could incorporate it with the X-band AESA on the integrated. I said "could", doesn't mean they did, its theoretical. The integrated mast also has four panels of possible ESM array, along with four panels of CEC array. If these are ESM arrays, then they act like passive radars and could possible be used for OTH passive detection. There are also similar panels on the Project 20385 Gremyaschy class corvettes. which also eliminated the Mineral ME OTH systems. so if something in the ship still retained the same OTH function, it would now be migrated to another system, likely as part of its ESM suite. Another potential place on the 055 for possible passive OTH is the ESM mast, which looks like a barbecue stick on top of the integrated mast. Another potential device is the pair of ESM units at the bottom of the mast and placed left and right of it. Similarly the 052C/D also have this pair of ESM.

The 055 has outdated the ubiquitous Type 726 EW suite that's been in used with the 052C/D, Liaoning and Shandong. It introduced a new generation EW suite that will be on the 003 and I expect on the 054B. The only thing retained from the Type 726 is a pair of 726-1 ESM modules are are placed on top of the integrated mast, and a new version of the 726-4 decoy suite. The 726-1 are used for signal analysis.

The only thing left of the Type 366 system on the 055 --- not completely absent after all --- is the 366-2 datalink the system used to communicate with other aerial assets. This appears as a small dome right on top of the bridge. That enables the ship to be compatible with airborne systems that already use this datalink.
You must log in or register to reply here.