Tam said:
The ones on the side of the hull should be ECM. As jammers they correspond to similar devices placed on the same area and position as other PLAN vessels, and with most modern naval warships in general, like Arleigh Burke, etc,. The reason why ECM is placed low and towards the center of the ship is that it anticipates where antship missiles are most likely to head and strike on the ship, and the ECM is going to be there the closest. You see that in how in the Shandong, the ECM is placed in the hull whereas the Liaoning, following the older Soviet style plans, have the ECM on the island. Likewise in the 075, both ECM are placed in the hull and right square in the middle of the ship.

For ECM, these are huge panels. They must have plenty of power, and if they are AESAs on their own, they might be able to generate multiple beams that can be used to soft kill antiship missiles on a saturation attack.

I expect this ECM system to be used on other ships. The first is on 003. The difference is they are now placed back on the island. Two on each sides of the island near where you expect the ship's digits are, then another facing in the front and the fourth panel facing the back. The panels are placed on an 0, 3, 6, 9'o clock positions. No, I don't think these are radars on the 003. So far the radars on the 003 are placed in quadrants at 45 degrees, and there are already eight radars in total. You have four large S-band radars, followed by four smaller X-band radars, both of these sets are also coming from the 055.

The next is that they may appear on the 054B. As such, its back to two panels and both should be located on the sides of the hull and under the bridge wings.

As far as OTH goes, they could incorporate it with the X-band AESA on the integrated. I said "could", doesn't mean they did, its theoretical. The integrated mast also has four panels of possible ESM array, along with four panels of CEC array. If these are ESM arrays, then they act like passive radars and could possible be used for OTH passive detection. There are also similar panels on the Project 20385 Gremyaschy class corvettes. which also eliminated the Mineral ME OTH systems. so if something in the ship still retained the same OTH function, it would now be migrated to another system, likely as part of its ESM suite. Another potential place on the 055 for possible passive OTH is the ESM mast, which looks like a barbecue stick on top of the integrated mast. Another potential device is the pair of ESM units at the bottom of the mast and placed left and right of it. Similarly the 052C/D also have this pair of ESM.

The 055 has outdated the ubiquitous Type 726 EW suite that's been in used with the 052C/D, Liaoning and Shandong. It introduced a new generation EW suite that will be on the 003 and I expect on the 054B. The only thing retained from the Type 726 is a pair of 726-1 ESM modules are are placed on top of the integrated mast, and a new version of the 726-4 decoy suite. The 726-1 are used for signal analysis.

The only thing left of the Type 366 system on the 055 --- not completely absent after all --- is the 366-2 datalink the system used to communicate with other aerial assets. This appears as a small dome right on top of the bridge. That enables the ship to be compatible with airborne systems that already use this datalink.
Click to expand...

Yeah I am aware that the more popular idea for what those are are probably ECM, it's just that these are gigantic for any ECM seen onboard naval vessels, let alone have two sets of similarly massive panels. Do you think both sets are related to EW or just the one below the bridge wing? And thoughts on the panels outside the hangers?
T

Cloud_Nine_ said:
Yeah I am aware that the more popular idea for what those are are probably ECM, it's just that these are gigantic for any ECM seen onboard naval vessels, let alone have two sets of similarly massive panels. Do you think both sets are related to EW or just the one below the bridge wing? And thoughts on the panels outside the hangers?
Click to expand...

The ones on the Kresta class are immense too even if they belong to a different era. See the four large circular thingies on each side of the main mast.

The four largest panels constitute the Type 346B radar. The two panels underneath the bridge wing should be ECM. If they are bigger than whats previously seen on other ships, then it might be because they are more powerful than on previous ships.

Panels outside the hanger could be opening for boats or torpedoes.

Registered Member
It's gonna be a good weekend, when you arrive home and PLA MRE, DF-16 and two PLAN heavy hitters are just waiting there... 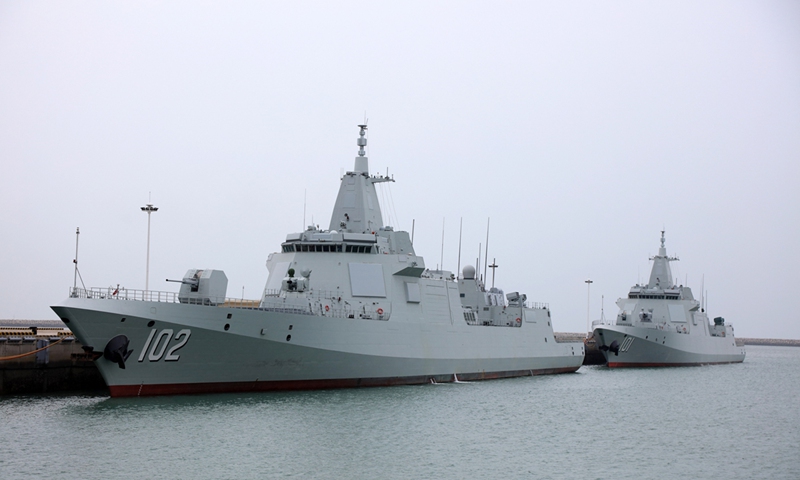 Two Type 055 large destroyers, the Nanchang and the Lhasa, are moored at a naval port in 2021. File photo: Courtesy of the Chinese People's Liberation Army Navy

China's second Type 055 large destroyer, the Lhasa, is reportedly holding its first far sea drills by entering the Sea of Japan, with experts saying on Wednesday that the ship has achieved full operational capability and demonstrated its capabilities in deterring possible foreign military interference in the Taiwan Straits at a time when the US and Japan have been repeatedly provoking China over the Taiwan question.

Japan's Maritime Self-Defense Force on Monday spotted a Chinese People's Liberation Army (PLA) flotilla consisting of three ships - the Lhasa, the Type 052D destroyer Chengdu and the Type 903 replenishment ship Dongpinghu - as they sailed through the Tsushima Strait from southwest to northeast toward the Sea of Japan, Japan's Ministry of Defense Joint Staff said in a press release late on Tuesday.

This was the first time the Lhasa has embarked on a far sea voyage since its commissioning into the PLA Navy in March 2021. Since the start of 2022, the ship has conducted a number of realistic combat scenario exercises
Please, Log in or Register to view URLs content!
, with experts saying then that it was preparing for more important operations soon to come.

The latest voyage indicates that the Lhasa has reached 100 percent operational capability, and it can carry out military missions in the far sea as the core of a flotilla, Wei Dongxu, a Beijing-based military expert, told the Global Times on Wednesday.

Navigating in formation, air defense and anti-submarine could be among training objectives in the drills, which will show that the PLA Navy can safeguard China's strategic interests in the far sea, Wei said.

The Nanchang, the first hull in the Type 055-class, made several far sea voyages in 2021 that saw its flotillas training in the Sea of Japan, approaching the US state of Alaska and circumnavigating Japan almost entirely. As the second ship of the same class, the Lhasa could have similar voyages, observers said.

The US and Japan have been repeatedly provoking China over the Taiwan question recently, with the US selling arms, sending officials and making wrong remarks, and Japan claiming that Taiwan's security is Japan's concern, despite Taiwan being an inalienable part of China and the Taiwan question being China's internal affair.

With the flotilla led by the Lhasa, the PLA Navy displayed the combat capabilities of its advanced surface vessels, which will serve as a deterrent to "Taiwan independence" secessionist and foreign military interference forces, Wei said.

At a time when the US and the West are attempting to jointly contain China's development and Japan's right-wing militarists are on the rise again, China must be prepared to safeguard its national sovereignty, territorial integrity and development interests, analysts said.

Strangelove said:
It's gonna be a good weekend, when you arrive home and PLA MRE, DF-16 and two PLAN heavy hitters are just waiting there...
Click to expand...

Strangelove said:
It's gonna be a good weekend, when you arrive home and PLA MRE, DF-16 and two PLAN heavy hitters are just waiting there...

Do you mind sharing where you buy them? Thanks.
S

weig2000 said:
Do you mind sharing where you buy them? Thanks.
Click to expand...

I hope we see the re-start programme soon
T

Registered Member
Rumor is the 2nd batch of 055 construction has been halted.
The reason: something better is coming: Objective Ship.（目标舰）It is said that it will be CGX of China.

Next time please include the source of the rumour.
Last edited by a moderator: Monday at 10:33 AM

Registered Member
Can we get a source?

Tiberium said:
Rumor is the 2nd batch of 055 construction has been halted.
The reason: something better is coming: Objective Ship.（目标舰）It is said that it will be CGX of China.
Click to expand...