A number of social media accounts supporting Haftar alleged a drone/UAV departing from Mitigar Air Base was downed. Yet, as a result of the first examinations of the photos of the platform allegedly downed made by Defence Turk, it was revealed that the platform was not downed. Instead, what was seen on the photo indicated they were only some parts of the drone after attacking.

Detection of KARGU from photos
Kadir Doğan, author of Defence Turk, stated after his examinations that the parts in the photos belonged to KARGU. 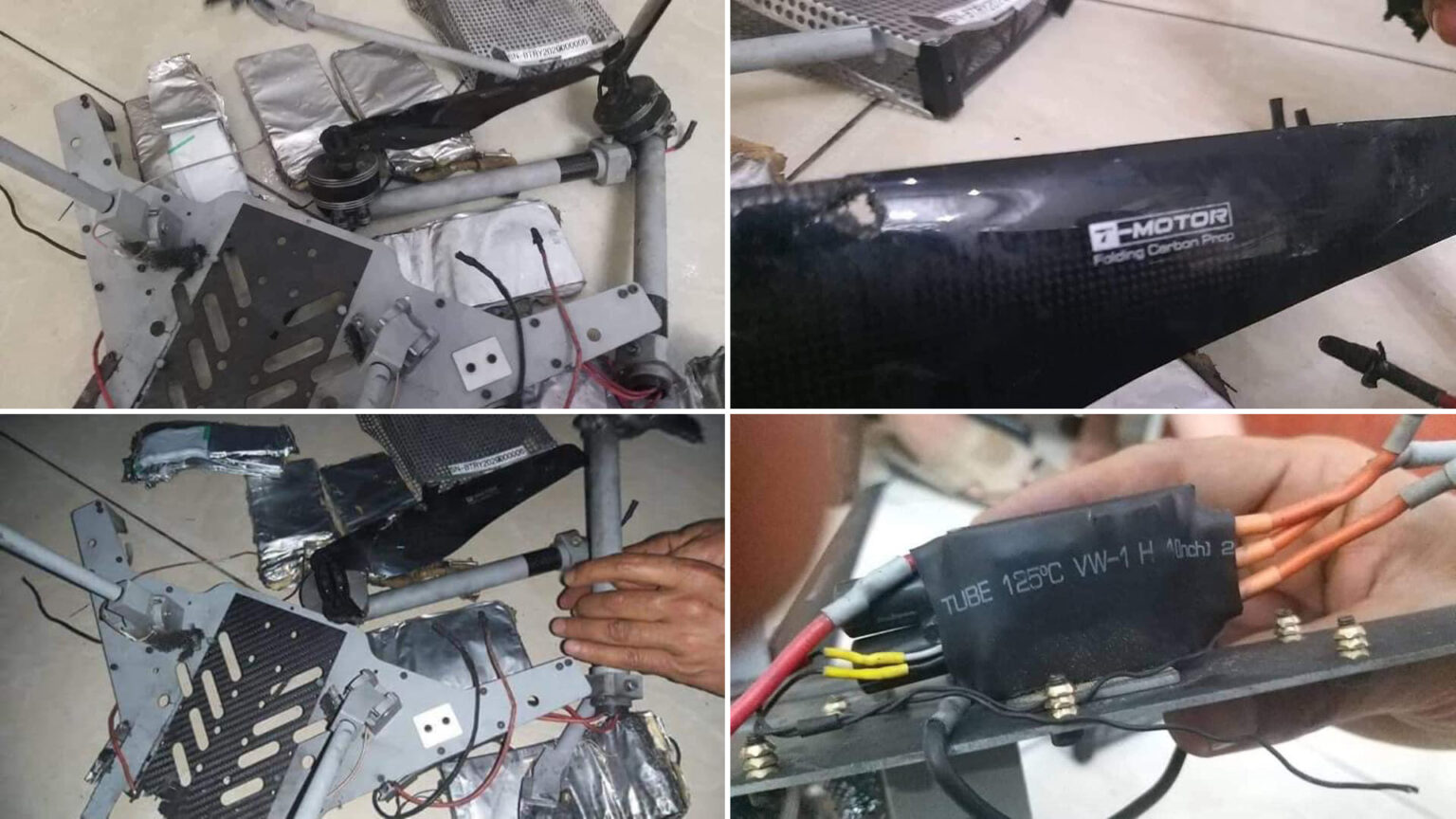 According to Doğan, the parts in the photos;
case structure and dimensions of the structure are the parts of KARGU by STM that was spotted in Libya.

Why is KARGU still intact despite being hit?

When the structure of KARGU kamikaze UAV is examined, the condition of the front side, where the explosive and the camera are set, can be distinguished.
In the first examinations by Kadir Doğan, it turned out that the guided warhead and camera were not visible and these parts became separated from the rear side after burning / exploding. As a consequence, the explosive on the front side detonated while acquiring the target. However, the rear side remained structurally intact. Said to be the explosive head on various social media accounts, the silvery parts wrapped with folio were indeed the battery blocks.

Pro-Haftar forces claimed a number of Bayraktar TB2 were downed

The forces affiliated to putschist Khalifa Haftar disinform people on social media. In the previous months, Haftar supporters claimed they downed 26 Bayraktar TB2, which is a made-up story. When the images were analyzed, it came to light that some UAVs downed in the region were being carried to various locations in trucks and rephotographed and share as if they had been recently downed.

Hmm... but what's the practicality of this type of platform for the infantry? This seems very focused on COIN ops, and less on conventional infantry support. What will this thing target in a conventional fight that can't be better handled by mortars?

Note, I'm a huge proponent of "Kamakazi" drones for the Air Force, but they have longer range and a proper payload, and can do serious damage to SAM sites and C4I nodes. The Army only needs UAVs for recon. Their fire support should come from artillery and gunships for proper CAS. If the army wants UCAV-type platforms, they should get missiles equipped with cluster munitions that can take out massed ground forces.

(Rant on) There's a bunch of new products that are being marketed by the defense industries whose only application is COIN ops. Many of these products have no real applications for conventional battlefields. This is due to the focus on special operations in the 'war on terror', which has been a complete strategic failure. It's not an operational model to replicate. (Rant off.)
Last edited: Jun 1, 2020
D Libya’s UN-recognized government of National Accord (GNA) gained control of Tarhouna, previously under the control of the putschist Haftar.

On June 4, after the forces affiliated with renegade general Haftar retreated from Qasr bin Ghashir and Wadi Al Rabi, GNA forces fully liberated Tarhouna on June 5. According to some statements, the forces affiliated to the putschist Khalifa Haftar have started to retreat back into Al-Jufra. On 5 June 2020, it was reported that a convoy of 300+ vehicles of the Haftar forced was pulling back from Beni Velid towards Al-Sehir.

“We are moving out of Tripoli and decided to join the 5+5 committee.” said Al-Mismari, spokesperson for the putschist Haftar. GNA forces successfully progressed in two days as there was no resistance.

On June 3, GNA forces were advantegous when they fully retook the former Tripoli International Airport at the time Sarraj, head of Tripoli-based GNA, visited Turkey, resulting in a great advance.

With the operation simultaneously mounted in the south of Tripoli and west of Tarhouna on May 22, some critical locations where the putschist Haftar forces had had under control for more than 1 year are now under the control of the GNA forces. In addition to the progress on May 22, in the continuing operation on May 23, Libya’s GNA cleared two critical camps, Hamza and Yarmouk camps, out of the forces of the putschist Haftar.

Watiyya: The Game Changer
On May 18 2020, the forces affiliated to the Government of National Accord, recognized as a legitimate government by the UN in Libya, retook the critical Watya Air Base, previously occupied by the Haftar forces. The GNA forces, which have made progress since May 18 in the southern part of Watiyya air base, have regained control in Alasaba.

Despite the putschist Haftar’s force, the GNA forces have made a substantial progress in the field since the day when the Watiyya air base was captured. Besides the destroyed Russian air defense systems utilized by the Haftar militias, locals embracing the GNA forces led the victory.

Registered Member
Another tectonic shift is on the horizon:

Please, Log in or Register to view URLs content!
Ankara and Tehran appear to be cooperating against the Kurds in Iraq.
By: Caroline D. Rose


Earlier this week, there appeared to be a thaw in tensions between Iran and Turkey. After months of tense exchanges, Iranian Foreign Minister Mohammad Javad Zarif visited Istanbul to discuss “all aspects” of the Iranian-Turkish relationship with his Turkish counterpart, Mevlut Cavusoglu. After the meeting, the ministers announced plans to deepen trade ties, further cooperate in the Syrian peace process and reopen Iran-Turkey border crossings. These developments are part of a new Middle Eastern entente in the making.

Last year, Turkey launched Operation Claw against militants from the Kurdistan Workers’ Party, or PKK, in northern Iraq, and just this week, it launched aerial and ground offensives, dubbed Operation Claw-Eagle and Operation Claw-Tiger, that involved the deployment of ground, artillery and air units to “neutralize” 500 PKK targets and set up a series of temporary bases in the region. In the past, Turkey has launched these types of counterterrorism operations alone. But this time, it had backup. And as Operation Claw-Eagle began, Iranian artillery units simultaneously shelled multiple PKK hideouts along the Iran-Iraq border around the Haji Omeran district.

Iran’s assault on the PKK was more than just a coincidence; it appears that Ankara and Tehran are creating the conditions for a new alliance framework in the Levant. And if the two countries are indeed cooperating against the Kurds, it would be an unexpected development because Turkey has long sought to enlist Iranian support against the PKK without success. It has been cracking down for years on suspected PKK insurgents in southern Turkey and northern Iraq, but acknowledges that it can’t continue to do so on its own. For geographical reasons, it needs Iran’s help. The operational heart of the PKK and its affiliates lies in the Qandil Mountains near the Iraq-Iran border. The jagged terrain provides easy cover for insurgents, while the proximity to major border crossings allows insurgents to bypass Turkish border controls and use the Iranian border as a corridor to reach affiliates outside Iraq. Without an Iranian crackdown on insurgent safe havens along its border with Iraq and Turkey, Turkey would struggle to completely eliminate the PKK’s regional hold.

For years, however, despite Turkish lobbying, Tehran gave Ankara the cold shoulder – and for good reason. The two are not only regional rivals but also competitors in Iraq. Despite a difficult history, Turkey has boosted ties with the Kurdistan Regional Government to try to balance out Iranian influence in the Iraqi government and deter Iran from building a Shiite Crescent from the Zagros Mountains to the Mediterranean Sea. While Turkey by no means supports Kurdish independence, it has supported
Please, Log in or Register to view URLs content!
by purchasing KRG oil and gas exports to satisfy skyrocketing Turkish demand and diversify supply routes. For years, these objectives threatened the Iraqi government’s political leverage and monopoly over energy revenue, placing Ankara at odds with Tehran.
Please, Log in or Register to view URLs content!
, including the PKK, to undermine Turkish and KRG interests in Iraq.

It’s unclear how far this partnership will go. Iran and Turkey continue to pursue different agendas in Syria, the Palestinian territories and the Greater Middle East, and ultimately still see each other as competitors. But their recent experiment in northern Iraq is a definitive sign of new national security priorities and a shifting alliance structure in the Levant.
A

Within the scope of the Early Warning Radar System (EIRS) Project, the development and supply of radar systems demanded by the Air Force Command for ensuring early warning are planned. As part of the project, 4 Portable EIRS will be produced.

According to the information released by Defense Turk, tests started on the EIRS System radar, which will also comprise the ÇAFRAD (Multifunction Phased Array Radar) system Long Range Search Radar (UMR). The system is scheduled to be delivered in the first quarter of 2021.

EIRS is also of great importance for the production of this type of radar for the first time in our country.

The systems are being developed with the aim of long-range warning and detection of targets with very low Radar Cross Section such as ballistic missiles and unmanned aerial vehicles from very long ranges and early warning of them as well as being operational under variable electronic mixing and difficult geographical conditions. It is also aimed to be used for configuring the systems.

EIRS can perform data fusion and track handover amongst themselves, which is a critical feature especially for
ballistic missile defense

EIRS is a new generation S-Band radar developed for long-range early warning, with AESA and antenna architecture in digital beamforming architecture. Fixed and portable early warning radars will be produced as part of the project.

According to the information by Azeridefence, Turkish Aviation and Space Industry (TAI) continues to introduce the ŞİMŞEK target drone system in Azerbaijan and Kazakhstan. As part of the project, ŞİMŞEK High-Speed Target Drone System was tested in Azerbaijan.

TAI stated that Şimşek target drones were selected in order to use during the firing tests conducted by the Azerbaijan Air Force to test the effectiveness of the air defence systems. After the negotiations between TAI and Azerbaijan Air Force, the ŞİMŞEK High Speed Target Drone System, which was brought to Azerbaijan in late 2019, carried out six flights within 3 days, 3 of which were in the test area near Baku, the capital of Azerbaijan.

TAI, which continues to develop new concepts on ŞİMŞEK High-Speed Target Drone System constantly, integrated the Şimşek target drone system into ANKA Unmanned Aerial Vehicles recently. ŞİMŞEK target drone, which can be integrated into each wing, is launched from air to air.

According to the information provided by Azeridefence, TAI managed to make another breakthrough in the unmanned aerial vehicle industry, integrating a target drone into ANKA UAV which has more than 50.000 hours of flight and has proved itself in the domestic and foreign operations. The “ŞİMŞEK” target drone system, which can be launched not only from land platforms but also from surface platforms, can land using a parachute after completing its mission.

Being reported which was reported to provide a very successful performance in the military drills conducted by the Turkish Navy, ŞİMŞEK served as a target drone during the military drills of the Naval Forces Command between the dates of 12-17 January 2020 in the Aegean Sea.

Being an indigenous Design and Development program, ŞİMŞEK High Speed Target Drone System program was initiated in 2009 to meet the increased training requirements of the Turkish Armed Forces (TAF).