The Pentagon is working with the F-35 prime contractors to identify alternative sources for the parts Turkish industry produces for the Joint Strike Fighter, as the Defense Department’s acquisition chief says there will be “no major disruptions” if DOD can stick to its plan to remove Turkish industry from the program by early next year.

The Pentagon has begun
Please, Log in or Register to view URLs content!
because of its purchase of the Russian S-400 air defense system. While DOD officials say they can reverse plans if Turkey decided to forego acceptance of the S-400, the Pentagon has spent the last six months identifying alternate sources for F-35 supply.

DOD is now eyeing “early 2020” for when Turkish companies would cease contributing to the Joint Strike Fighter’s supply chain, Under Secretary of Defense for Acquisition and Sustainment Ellen Lord told reporters at the Pentagon today. She said Turkish industry produces 937 parts for the F-35, with about 400 of those sole-source contracts. For example, Turkey makes a “large portion” of the F-35 landing gear, as well as the aircraft’s center fuselage, according to Lord.

“That's not to say we won't continue to do what we always do with good program management, and look for other sources, because we would like to have second, third sources for most of the items,” she added.

But today, Lord said Winter’s projections were based around Turkish companies being cut out early this summer, rather than DOD’s plan for early 2020.

“What we are doing is working to do a very disciplined and graceful wind down,” Lord said. “If we can work to our timelines with the Turks, we would have no major disruptions and very few delays.”

Asked if the situation is affecting DOD’s negotiations over Lot 12 aircraft, she said: “Not at all.”

Meanwhile, DOD officials are having “internal discussions” as to what to do about the four F-35s Turkey has already purchased, Lord said. The aircraft are currently at Luke Air Force Base, AZ. Lockheed Chief Executive Marillyn Hewson recently
Please, Log in or Register to view URLs content!
.
Click to expand...

Also he’s not known to back down

Imagine it went through

But question is, if China won the SAM contract based on capability over S400 why on earth did China buy S400?
Click to expand...

AFAIK back then Russia did not offer the S-400 in the contest. They offered Turkey the S-300VM (?).
The Chinese offer was also the only one with a full tech transfer and it was the cheapest.
T

yet China selected S400 over its own domestic systems
Click to expand...

I got your question, maybe you haven't get my answer. The point is, for China the S400 purchase is an upgrade to their existing S300 batteries, such as adding some long range missiles that are not part of S300 with related radars.

If you have 100 batteries of S300, you can upgrade them to S400 standard by adding x amount of money, or you replace them with 100 batteries of domestic made with 10 times (just figurative) the cost of an upgrade, what would you do?

Allow me to take Pakistan as an example, PAK air force has some 85 F-16, if you have the choice to upgrade all of them to block CD level without blockade of US, would you buy 85 J-10 instead even if China can offer avionics and radars better than block CD? I am sure you will only by J-10 if you want to increase the number of fighters more than 85, but you will stick to upgrading F-16 if the number remains.

Also it is wrong to say one is superior over the others just because one wan a tender. Eurofighter has won tenders over Rafale or F-XXs, it does not mean anyone of them are superior over anyone else, does it?
G

Registered Member
Iirc, with all s400 wars this nice little upgrade hasn't even appeared here.
There is some irony, what one of the worlds' most advanced tanks in 2019 is ... M60. +/- 60 years after its introduction. Perhaps more remarkably, their known Leopard 2a4 modernisation attempt is far more moderate in scale.
It seems what good old patton in the end simply has more potential. 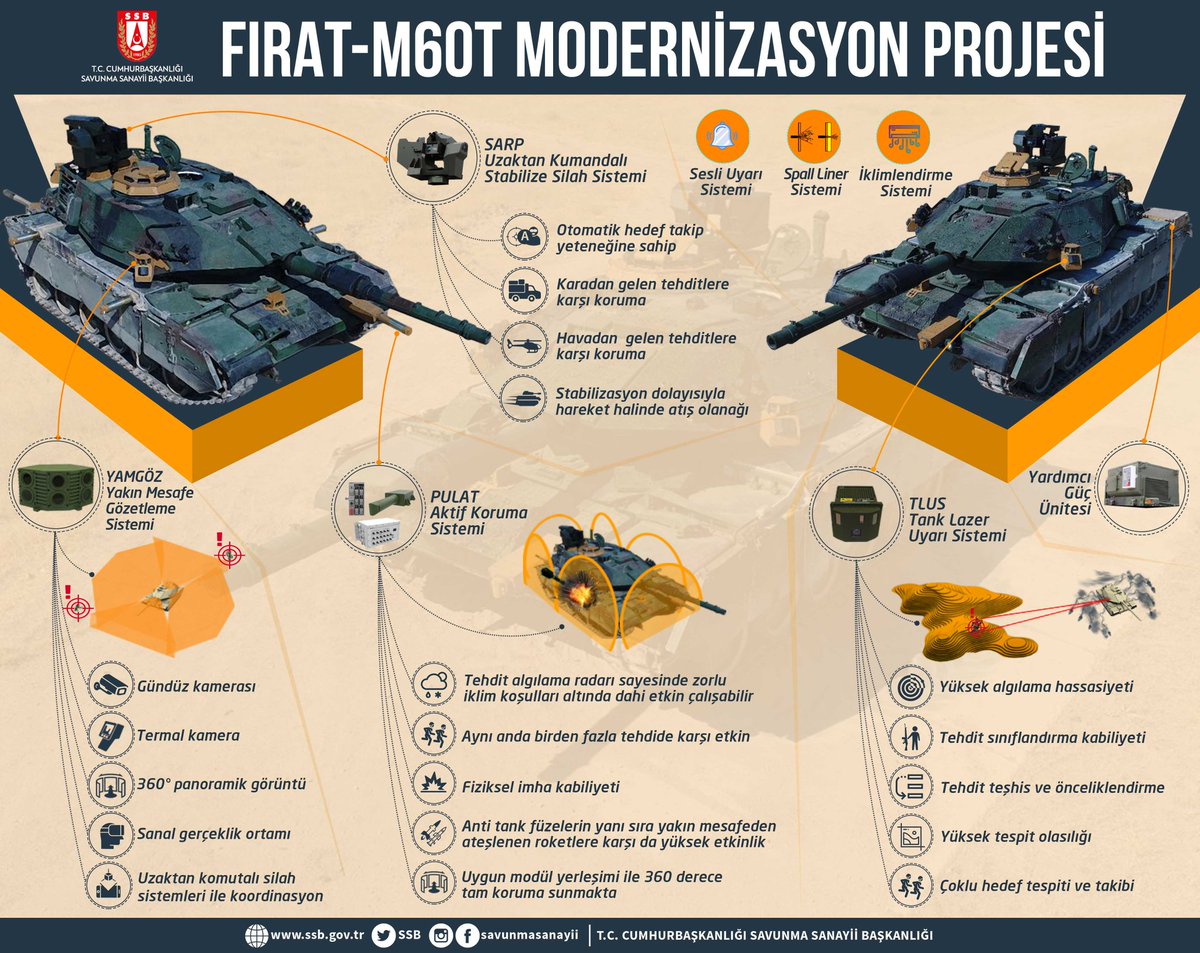 First, technically M60 isn’t a Patton tank. M46 was M47 was M48 was. But not M60. You see the Widow of the infamous Salty General smashed a champagne bottle on the bow of the three earlier tanks but not M60. Like M113 people assumed a name for it.
Abrams was christened, Bradley was christened, Stryker was christened. Helicopters like Apache are given a ceremonial adoption by the namesake tribe. M60 didn’t have that happen. It was a fallback plan at the start after the T95 Medium tank (not to be confused with the T95 Heavy tank) program was cancelled. Even as the M60 entered service the Army was debating joining the Russians with a Missile firing tank gun. The Short lived MBT70 program and interim M60A2 with 152mm smooth bore guns packing Shillelagh missiles along side the M551 Sheridan all come about this time and all leave Service fairly quickly to. M60A2 being retrofit back with modified M60A1 turrets as M60A3 and serving until the M1 Abrams family came on line.

Second it actually shouldn’t be such a shock.
However the Leopard 2A4 remains in service. I say it shouldn’t be a shock as if we trek over to Jordan, we find the Jordanian Army is another M60 user. After the Gulf war they received the bulk of the surplus Challenger 1 Tank. Those Challenger 1 tanks having in British service been superseded by the Challenger 2. Well recently Jordan said they were retiring them to. Challenger 1 dates from 1982. The Jordanians decided to upgrade their M60 fleet with a package from Leonardo.
G

Registered Member
Nonono. Shocking part is, look at the scale of this upgrade(on top of already thoroughly upgraded Sabra).
This basically becomes one of the most advanced tanks in the world.
And probably, the best movable pillbox(as they tend to be used) out there.

P.s. as far as i understand, Altay is set to replace 2A4s, not these.

Turkey shows Mock up if TF-X at Paris Air show.


LONDON—Turkish Aerospace Industries (TAI) will debut a full-scale mockup of its TF-X/MMU indigenous fighter at the Paris Air Show next week.

The company’s chief executive, Temel Kotil, and Turkish government officials are expected to lift the veil on the mockup on June 17, the show’s opening day.

Although already delayed by several years, the flagship program aims to roll out a prototype in 2023 and take flight in 2026 before deliveries to the primary customer, the Turkish Air Force, begin in the early 2030s. Turkey aims to replace its locally-assembled F-16s with the twin-engine, fifth-generation fighter.

The unveiling is unlikely to distract attention from the growing spat between the Turkish and U.S. governments over President Recep Tayyip Erdogan’s planned purchase of a Russian-made S-400 ground-based air defense system and the potential threat it poses to Turkey’s planned buy of the F-35 Joint Strike Fighter. Ankara is being prevented from participating in meetings of F-35 partner nations, and the U.S. is also threatening to halt the country’s industrial participation and delivery. Training of Turkish personnel on the F-35 has already been halted. Turkish Aerospace currently assembles the center fuselages, produces composite skins and weapon bay doors and manufactures fiber placement composite air inlet ducts. The company would suffer if Turkish program participation is frozen.

Turkish officials have said the S-400 purchase is a done deal, with the first elements of the system due to arrive in July.

The U.S. has also threatened sanctions that may impact other Turkish programs, including the TF-X, which will be reliant on U.S.-made General Electric engines for the initial prototypes.

Revealing the TF-X is part of a large Turkish Aerospace presence at this year’s show, which also includes mockups of the Hurjet jet trainer and the T625 Gokbey utility helicopter.
Click to expand...

I know what your thinking this is days old. And you would be right. So I pulled these off of Twitter.
Photos from @Ozkok_a

..., did he fire six shots, or only five?
but being this Magnun-forty-four,
the most powerful handgun in the world,
that can blow off your head right off,
you should be asking yourself one question:
do I feel lucky?

in case you didn't know,
S-400 batteries planned to be deployed in Ankara, southeastern Turkey
Please, Log in or Register to view URLs content!
You must log in or register to reply here.