manqiangrexue said:
I think China has basically decided that amid the Trump hostilities, it is no longer willing to divulge the true capabilities of its top systems as that knowledge provides information with which to predict how much China's key industries and military can benefit from them. Indeed, in June, it withheld more than one Shuguang supercomputers that were said to be over 50% more powerful than America's top system. I can't find any more public information on how much they or other new Chinese designs have improved since then but China's continued ascent on the number of TOP500 systems as well as capability of their aggregate performance (even without the big guns) strongly suggests parallel improvements to its elite supercomputers.

well it's been some time since an exascale computer race began I mean apparently withIN China:
Oct 23, 2018

so let's wait and see

(I plotted it already several years ago: 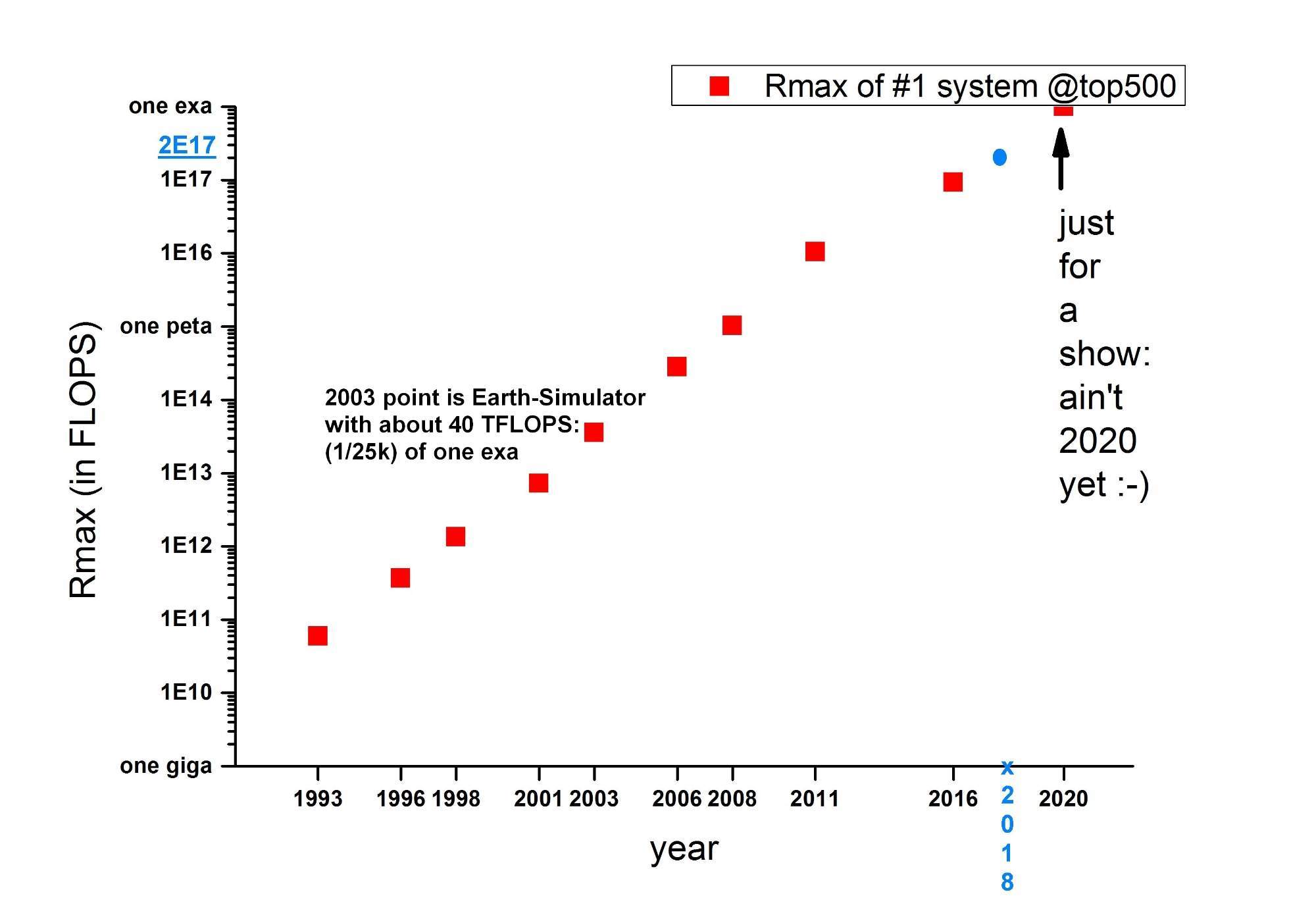 nugroho said:
Beigene is chinese company , but more than 50% of it's shares are held by foreign investor. Chinese investment institutions and brokerages should ramp up their share in this kind of company, because in the future this kind will be the " battlefield " of biopharmaceutical tech war
Click to expand...

I don't think it is the right way of thinking. As long as the company is registered in China is fine, the ownership via stock exchange could be anybody
T

Registered Member
Taking out a Chinese made EV car in Europe. This can be a sweet urban car.

Chinese employees are
Please, Log in or Register to view URLs content!
at Facebook, especially after several events in the last few months that workers perceive as hostile to China, according to Business Insider.
Click to expand...

China successfully sent the 50th and 51st #satellite of the #BeiDou Navigation Satellite System (BDS) into space on board a Long March-3B carrier rocket at 8:55 AM Saturday from the Xichang Satellite Launch Center in SW China’s Sichuan.

Only 4 more satellites to go before to complete Beidou-3 system and it will be a true global Navigation Sat System, a few years before Galileo

So, from a 10% chance of Facebook getting into China. Zuckergberg has decided to reduce the chances to 0.00001% by his criticisms.

We are seeing the beginning of the decline of silicone valley.
T

Registered Member
The arrogant silicon valley bosses have to realize that the Chinese joining their business only because of their technical prowess and therefor an individual prosperity, not because the bosses' ideological commitment being attractive. The bosses do not own the mind and heart of the employees. The truth is, in every corners of the world, people's heart are always free and belong to themselves, not only in the so-called "authoritarian" states but also in the "free" states. The advocating of "freedom" is a double-bladed sword. "drop the stone on one's own feet".

Tech exiting the US due to American administrative interference, particularly with China:

The nonprofit RISC-V Foundation (pronounced risk-five) wants to ensure that universities, governments and companies outside the United States can help develop its open-source technology, its Chief Executive Calista Redmond said in an interview with Reuters.

She said the foundation's global collaboration has faced no restrictions to date but members are "concerned about possible geopolitical disruption."

"From around the world, we've heard that 'If the incorporation was not in the U.S., we would be a lot more comfortable'," she said. Redmond said the foundation's board of directors approved the move unanimously but declined to disclose which members prompted it.

The foundation's move from Delaware to Switzerland may foreshadow further technology flight because of U.S. restrictions on dealing with some Chinese technology companies, said William Reinsch...

"There is a message for the government. The message is, if you clamp down on things too tightly this is what is going to happen. In a global supply chain world, companies have choices, and one choice is to go overseas," he said.

Morgan Reed, president of The App Association, which represents major U.S. technology firms such as Apple Inc <AAPL.O> and Microsoft Corp <MSFT.O> in Washington ...said, "The notion that China can be barred from participating in standards alongside the U.S. and the EU is simply not viable," Reed said. "China is too important as a manufacturer and an end-market to ignore."

In June, more than two dozen standards groups - including those overseeing SD memory cards and Ethernet and HDMI cables ...warned Ross that the Huawei restrictions posed a "serious risk" that standards work could move out of the United States, which could end a long-held trend where U.S.-based groups set de facto standards for the rest of the world, they wrote.
You must log in or register to reply here.