I read on Wikipedia that the French FTI "intermediate frigate" program is for five units, replacing the La Fayette-class ships.

So will more FTIs be built to replace both the Floreals and La Fayettes, or will the La Fayettes be maintained and replace the Floreals in their roles? Or is there another path?
T

Lethe said:
I read on Wikipedia that the French FTI "intermediate frigate" program is for five units, replacing the La Fayette-class ships.

So will more FTIs be built to replace both the Floreals and La Fayettes, or will the La Fayettes be maintained and replace the Floreals in their roles? Or is there another path?
Click to expand...

To this day, there are no concrete plans to replace the Floreal class. This perspective will be taken in consideration in the LPM-Loi de Programmation Militaire 2020-2025. In fact, neither the FDI program (since January it isn't anymore "Frégates de Taille Intermédiaire" but "Frégates de Défense et d’Intervention") nor the BATSIMAR program consider replacing this fleet of surveillance frigates.

Once their current carrier reaches the end of its life around 2030 even with another upgrade what is next for France?

Registered Member
Remains to be seen what will happen with the incompetent Macron serving as President.
But the French do have the carrier design which was used as a basis for the QE-class.
So it would be rather trivial, I guess, to build a conventionally powered catapult carrier similar to that.

Problem is the French parliament has indicated they want a nuclear powered carrier so that design can't be used as is.

hawkish
France promises a presence in the Pacific amid an anticipated ‘global confrontation’
Please, Log in or Register to view URLs content!

France’s armed forces minister has pledged the country will remain committed to the Pacific region, as she warned of a “
Please, Log in or Register to view URLs content!
” emerging there.

Speaking on Sunday at the annual Shangri-La Dialogue security summit in Singapore, Florence Parly reminded her audience that France has a stake in the region — 1.6 million inhabitants, several island territories in the Indian and south Pacific oceans, and a vast exclusive economic zone from these possessions.

As such, the evolving regional security order directly affects France, with Parly observing that “it takes no
Please, Log in or Register to view URLs content!
to see the building blocks of a global confrontation taking place here in Asia.”

She said her country will remain engaged in the region “in our own steady, nonconfrontational but obstinate way,” and that French Navy ships will continue to sail through the South China Sea more than twice a year and will not be intimidated into accepting any fait accompli
Please, Log in or Register to view URLs content!

She also highlighted France’s contribution to efforts against nuclear proliferation as part of its plan to contribute to “strategic stability through multilateral action,” with its air and naval assets joining in the operation to monitor North Korean smuggling efforts that contravene United Nations sanctions.

To underscore the comment about France’s naval presence in the region, a carrier strike group centered around the country’s sole nuclear-powered aircraft carrier was making a port visit to Singapore to coincide Parly’s speech. The Charles de Gaulle, carrying 18 Rafale fighter jets in addition to airborne early warning aircraft and helicopters, was in a midst of a deployment that started in March and is scheduled to end in July.

Named Mission Clemenceau, the deployment saw the French jets take part in coalition operations in the Middle East against the Islamic State group. They also conducted exercises with several other countries in the region and beyond, including with the United States, India, Australia, Japan, Malaysia and Singapore. There are also planned interactions with other regional forces, such as Vietnam and Thailand.

Parly’s speech also coincided with the release of a report on Indo-Pacific security by the French Armed Forces Ministry. The report said the country is developing a network of strategic partnerships with nations in the Indo-Pacific region and “supports and wishes to contribute to the building of a regional security architecture” to deal with risks and tensions, including terrorism, challenges to multilateralism and growing polarization.
Click to expand...

The French government has placed an order for six of the 5,000-tonne submarines made by Naval Group, in which defence company Thales (TCFP.PA) has a 35 percent stake.

The French navy expects to take delivery of the first, named “Suffren”, for sea trials in 2020 and the remainder will enter service over the following decade, replacing France’s ageing ‘Ruby’ class submarines.<<

Registered Member
No thanks to Macron since the project did not start on his watch. This can be thanked to a string of French Presidents. From Charles de Gaulle for funding the nuclear deterrent on their own and not settling with playing a bit role to the US. The "other" rocket program with their own Germans. While the US had the chief designers of the A-4/V-2 (von Braun), the Soviets other designers of the V-2 (Groettrup), and the French had the designers of the Silbervogel (Sanger). They went through a decades long painstaking process which resulted on the "precious stones" program which led to the Diamant rocket. Then later they developed solids. This was a continuous effort, but I would like to note a couple milestones, like Chirac's testing of the new nuclear warhead design even against international pressure. That is why France has a nuclear deterrent today.
While this is an attack submarine, the nuclear program all start way back then, including the civilian nuclear reactor program.

If anything Macron can only be thanked for not cancelling the existing, highly successful, program.

in fact it ends with
"Delivery of the Suffren, the first-of-class Barracuda, is due in 2020, some three years late."
Click to expand... 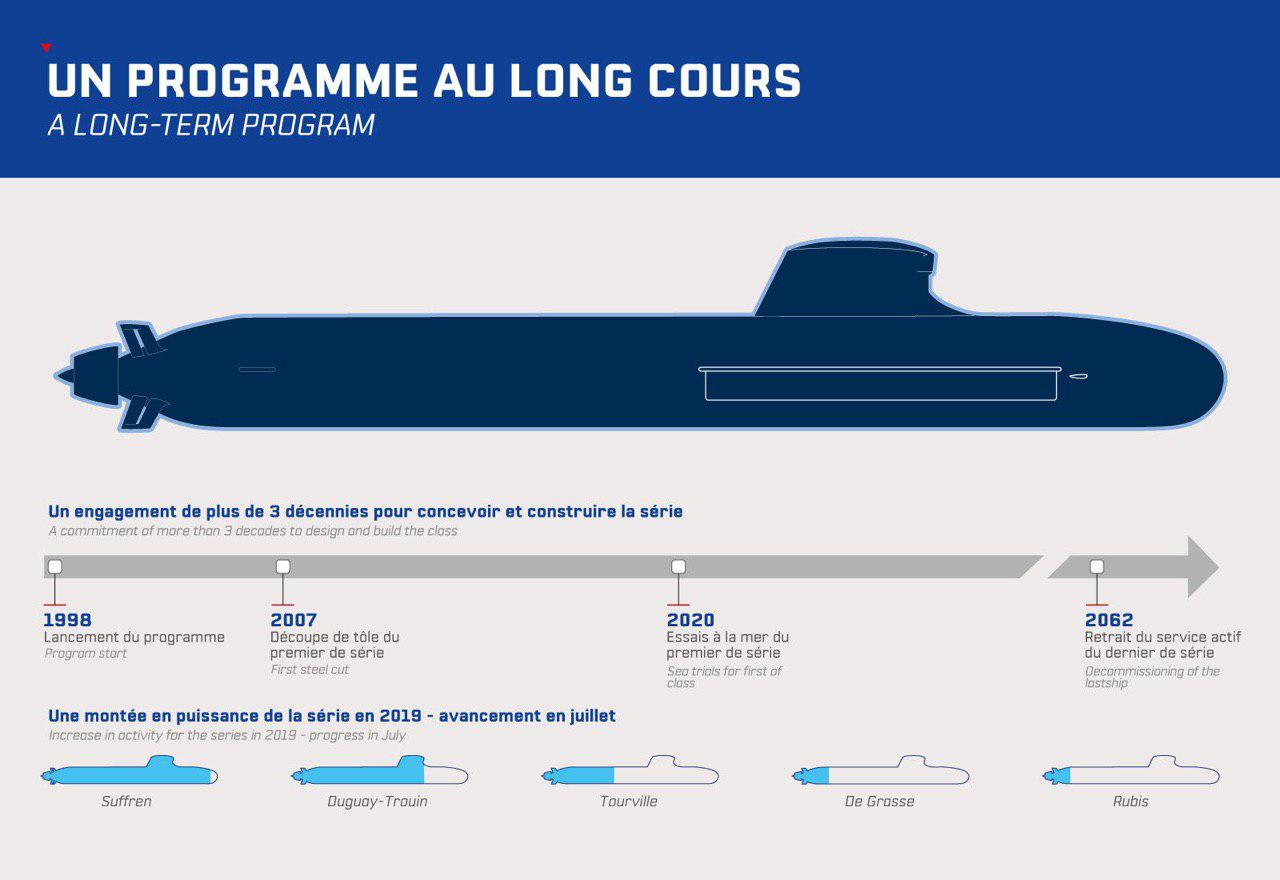