Unfortunately, that's all I have. Will share as soon as more becomes available.

Upon further examination, I think I had been mistaken. I now think the drone in the photo is actually that of Wing Loong II: the size, contour, and the chine actually match more closely (see second photo)

My original (erroneous) post was based on information taken from a Chinese forum. I should have examined it more closely before sharing it. My eyes aren't as sharp as they used to be.

China is now starting to deploy more unmanned boats and submarines for scientific and civilian use. Any word on the military use of these platforms ? 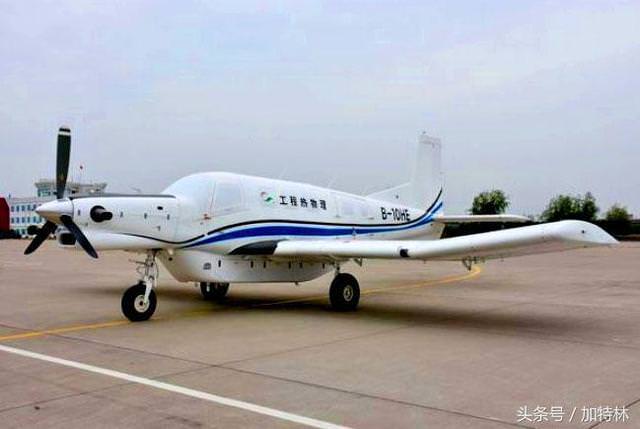 XiAn Aircraft converted a P-750 into a transport drone for ShunFeng Delivery.

This would be the ideal plane to supply SCS with mail, medicine, electronic part , perishable good 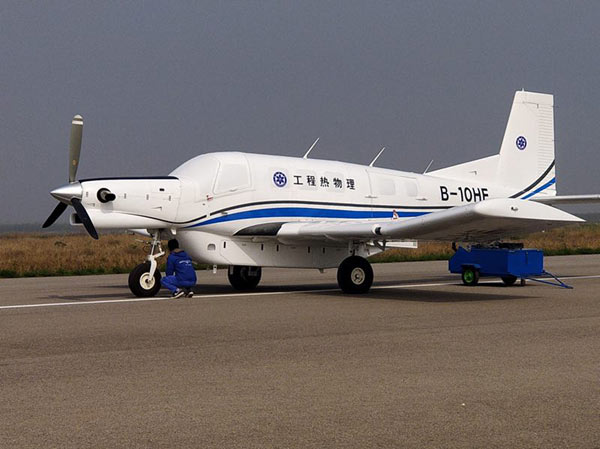 A worker checks the condition of an AT200 unmanned cargo aircraft in Pucheng, Shaanxi province, on Oct 26, 2017. (Photo by Zhang Zhihao/China Daily)

This unmanned freight aircraft, named AT200, was co-developed by the Institute of Engineering Thermophysics of the Chinese Academy of Sciences and other institutes. It performed well in the 26-minute test flight in Pucheng, Northwest China's Shaanxi provinceon, on Thursday .

According to the research and development team, the AT200 is equipped with a advanced control system, which makes it easier to manipulate the aircraft and reduce the freight cost.

Key technical breakthroughs have been achieved during the development and manufacturing of the plane, which is able to fly at 313 kilometers per hour for about eight hours.

The AT200 is also capable of taking off and landing in rough terrains, such as mountains and islands.

The research and development team said they are working to put AT200 into commercial operation soon. 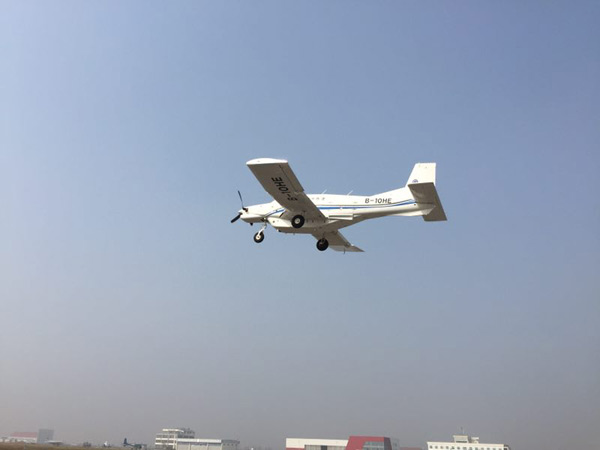 An AT200 unmanned cargo aircraft is on a test flight in Pucheng, Shaanxi province, on Oct 26, 2017. (Photo by Zhang Zhihao/China Daily)

China's booming logistic sector drive the proliferation of UAV . They are bringing bigger an bigger UAV to satisfy the demand for cheap and fast logistic. The Chinese military just sign contract with 6 logistic company to supply the military with logistic service Another civilian military integration


Please, Log in or Register to view URLs content!
After two years of development, AT200 , the largest cargo drone in the world with a 10 m³ "bunker" and 1,500 kg carrying capacity, made its maiden flight Thursday at Pucheng Neifu Airport (蒲城 内 府), in Shaanxi Province, located in western China.

According to
Please, Log in or Register to view URLs content!
, a subsidiary of the Chinese Academy of Sciences and responsible for piloting this project co-developed by several entities in China, the AT200 took off around midday in a thick fog and made his first flight which lasted about 26 minutes.

The EIT indicates that the cargo drone is equipped with a set of advanced CNG systems allowing full autonomy from take-off to landing, and several drones can also be controlled simultaneously by the control center. This will drastically reduce the operating costs and the difficulty of piloting.


Developed on behalf of SF Express - the second largest player in delivery service after the China Post and employing 400,000 employees across the country - the AT200 is actually a "dronised" aircraft, transformed from the plane CAP 750XL PAC Cresco Utility .

Note that the choice of dronisation of this particular model is driven by its exceptional performance in takeoff and landing - at full load, the 750XL PAC can take off and land on a runway of only 200 meters long, even on a Unprepared runway located at high altitude.

The EIT text also mentions military transport missions, in particular for "the logistical support of the islands in the South China Sea" and for the coastal countries along the "One Belt One Road" chain. the Chinese Air Force had just signed with five Chinese logistic companies, including SF Express, a strategic collaboration agreement.

The project team is also planning to develop the ability to parachute cargo with a CEP accuracy of 5 meters, which will allow the drone to deliver to islands that can not have a runway.


Please, Log in or Register to view URLs content!
The AT200 cargo drone developed by the EIT and several Chinese entities.


Please, Log in or Register to view URLs content!
The cargo hold of the AT200 cargo drone.

The multiplication of cargo drone projects in China, which we briefly mentioned in the "
Please, Log in or Register to view URLs content!
" issue last month, is essentially driven by the evolution of the country's domestic logistics market.

Since 2008, the logistics sector in China has grown exponentially by more than 40% per year. In 2016, the volume of freight transported is valued at more than 229.7 trillion yuan, or more than 29,684 billion euros, exceeding that of the US market.

In order to meet the needs of this new world market, China's big players are slowly starting to build their own fleet of cargo aircraft. SF Express alone has a fleet of 38 cargo planes, and China Post is planning to increase its fleet to 200 dedicated cargo planes by 2020.

But with an imbalance in the East-West market, an early slowdown in growth on developed areas in China and increasingly stiff competition, coupled with higher cost of conventional air transport and lack of pilots as well that the less developed infrastructure in the west of the country, the dronisation of the delivery service then becomes one of the preferred solutions to continue to support growth and ensure the margin of the carriers.

According to some analyzes, the need for a cargo drone with a capacity exceeding one ton is estimated at more than 3,000 aircraft in the next 20 years. Apart from the associated technological challenges that affect the many research areas such as artificial intelligence and big data, this will also force the Chinese authorities to have to establish adequate air regulations for the safe cohabitation of the aircraft being flown. not piloted.

by78 said:
CH-5 at or close to full weapons load... A different version of this was posted earlier, but that was a screen capture and of lower quality.

Finally, a high-resolution version of this is available. 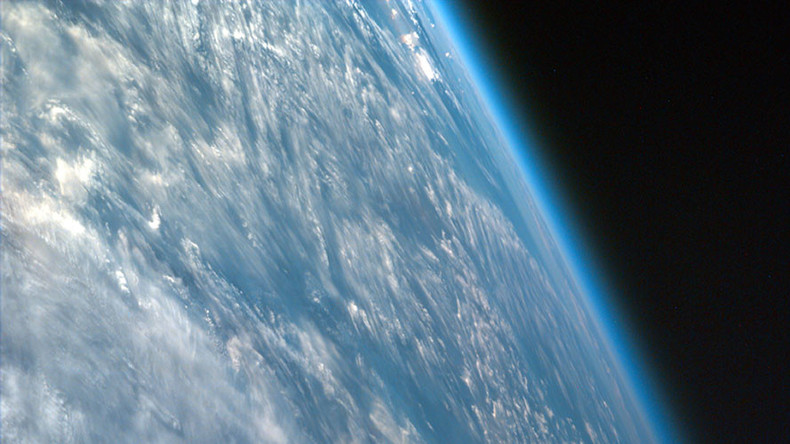 China is testing a tiny bat-sized spy drone the country hopes will help it dominate a region of the atmosphere known as the ‘death zone’.

Also known as ‘near space,’ the area begins roughly 20km (12 miles) above sea-level and is regarded as a death zone for drones as the thin air makes it hard for them to generate lift. Simultaneously, the extremely low temperatures of the zone means that the machines’ electronic components will likely fail.

One way the Chinese are hoping to combat the its negative effects is by reducing the number of electronic components in these new drones. Last month, at a research facility in Mongolia, China successfully tested an experimental drone at an altitude of 25km (15 miles), the South China Morning Post
Please, Log in or Register to view URLs content!
.

The drones tested don’t have a power motor, instead they glide through the air towards their destinations. They also don’t possess onboard cameras. The drones launched using an electromagnetic pulse that caused them to accelerate them from 0-100kph within an arm’s length.

“It shot out like a bullet,” Yang Yanchu, one of the project's lead scientists, told the publication. The drones then glided towards their targets, which were more than 100km (60 miles) away, adjusting course and altitude automatically.

Furthermore, due to their small size, only a minimal trace of their presence was detected on radar – a major plus for a spy-drone. “The goal of our research is to launch hundreds of these drones in one shot, like letting loose a bee or ant colony,” Yang added.

While current near-space drones, such as the American made MQ-9 Reaper and China’s Caihong 5, cost millions of dollars to produce and can reach altitudes of only about 10km (6 miles), these new prototypes would cost “as little as a few hundred yuan.” They are small enough to fit inside a shoebox and weigh about as much as a football.