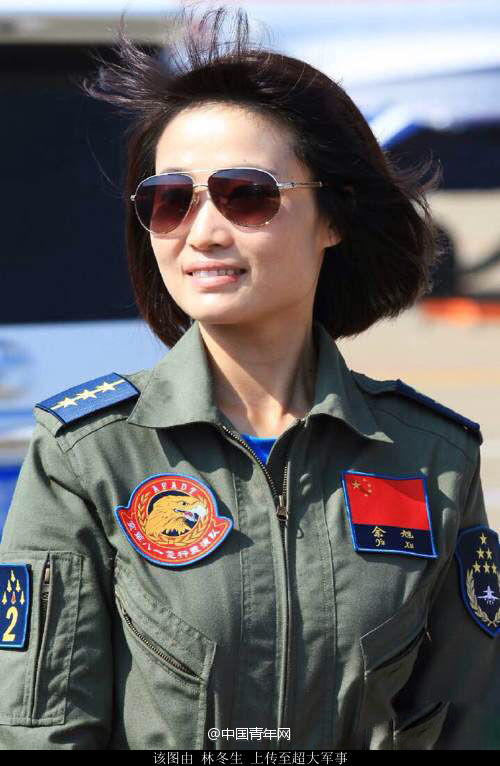 Out of curiosity what was her rank and what sort of aircraft do the acrobatic team use?
A

that could be a fake rumour, I haven't read any official news yet and if it did happen, would be a big news
K

Out of curiosity what was her rank and what sort of aircraft do the acrobatic team use?
Click to expand...

The August 1 team uses J10A but as Taxiya pointed out it may be fake news, lets hope it is.

KIENCHIN said:
The August 1 team uses J10A but as Taxiya pointed out it may be fake news, lets hope it is.
Click to expand...

Unfortunately it is not fake news. From what I have heard, the aircraft involved is not J-10A but a J-10S, the front seat pilot made it out with minor injuries, she also ejected but was hit by something (possibly another J-10).

Some one is really scare and dumbfounded by the proliferation of Chinese SAM and other weapon. Reuben Johnson is one of the better Chinese weapon analyst from IHS
What you guy think?

One of the more worrying items on the to-do list for the Trump administration will be the People’s Republic of China's (PRC) runaway arms-production spending spree. Every two years the overwhelming evidence of Beijing's military build-up is on display in the Guangdong Province city of Zhuhai, home to the Air Show China exhibition and just a short ferry ride from Hong Kong.

Name just about any category of weapon system in existence, and there are more types and models either in development or in production at Chinese defense enterprises than there are in the rest of the world's arms-producing nations combined. And the manner in which they are presented in Zhuhai—in a series of massive, sprawling exhibition halls stuffed to the ceiling with weapons—bristles with belligerence. The PRC's message? It wants all of these missiles, glide bombs, air defense systems, and fighter aircraft to be deployed against the U.S. military.

At this year's event, a former Defense Department official who has attended the expo in the past bore witness to this fact when he asked me, "Does anyone ever pay attention to the videos, the air-sea battle depictions with small-scale models, and the placards that are all over the exhibition stands of these Chinese firms? They show Chinese surface-to-air missiles shooting down American aircraft or Chinese anti-ship missiles sinking U.S. Navy aircraft carriers." The cumulative message: "China hates America and would like to blast us into the Stone Age."

A hostile nation producing weapons that present tangible threats to U.S. soldiers, sailors, and airmen is nothing new—such was the history of the Cold War. But there are two aspects to the PRC's massive armament program that are novel. One is that even to this day, Russian-made weapons are produced from design bureaus and military production plants that are well known to the international community. Which company makes air-launched weapons, which design office is responsible for certain types of radars—these are not deep, dark mysteries, as they are in the Middle Kingdom. Unlike any other event of its kind, Air Show China has become famous for the sudden and unexplained appearance of new weapons that have never been seen or heard of before. Where and when they were built is almost never clear.

What's more, in most cases, there is no one on-site at the show who will claim to work for the companies producing these weapons or be willing or able to say much about the item you are looking at and how it compares with other similar foreign products. On the odd occasion when someone is present as a representative of one of these Chinese arms-makers, they almost always claim to know nothing in detail about these systems being displayed. There is an atmosphere of deception and paranoia, with great effort taken to hide any and all information about the systems on display.

This is not normal at large air shows. Most of the world's arms manufacturers participate in such shows precisely to interest customers in their wares. They are eager to tell you straight out that "weapon X is designed to meet threat Y." They will describe that threat for you and explain how the weapon is optimized to achieve its objective with the fewest possible casualties. Chinese weapons makers instead appear to be engaged in an endless process of multiplying the ways of indiscriminately killing and blowing up their enemies—real or imagined.

If this were not enough, there is a second unsettling factor: China's industry seems to have no limit to the number of enterprises that turn out essentially the same class of product. There is a degree of overlapping redundancy unusual in the history of modern warfare. Having more than one company that produces aircraft, battle tanks, etc. is not at all out of the ordinary for military powers; it's generally a good idea to have two or three companies turning out a similar product so as to generate competition. But usually there are limits imposed by economies of scale.

Apparently, these kinds of calculations are not being made in China. There are a half-dozen or more separate air-defense systems being built in China, for example, which goes far beyond the PRC's justifiable defense requirements. It is as though the Maoist slogan has been updated: "Let a thousand death merchants bloom."

Just seeing the mountain of arms being pumped out of these Chinese factories on exhibit in Zhuhai does not even tell the whole story. It gets worse. There are also the arms not being exhibited. For example, there are whole production lines in China for those weapons that Beijing still purchases from Russia. Then there are the reverse-engineered illegal copies of Russian weapons that are built in the PRC. And as an added bonus, there are designs and production lines for weaponry destined for export to Iran. These production lines are shipped to the Islamic Republic lock, stock, and barrel so that Iranian plants can churn out anti-ship missiles to be used against U.S. Navy ships in the Persian Gulf or produce other arms to be shipped to Hezbollah.

During Air Show China, teams of procurement specialists from both Iran and North Korea could be seen in the exhibition halls vacuuming up every bit of information on weapons system design that they could find. Allegedly, the PRC is supposed to have embargoed North Korea from obtaining information that would aid its ballistic missile program. But like other Chinese commitments of this kind, this has turned out to be a joke. There was at least one six-man defense technology procurement team from Pyongyang at Zhuhai, scouring the halls where China's missile and space launch technology was on display.

The two countries' acquisition teams did not even try to hide their presence. The Iranian team appeared to have flown in on an Iranian Air Force Falcon 50 passenger jet that was parked out in the open on the tarmac next to several other aircraft that were there for a flying display. The North Korean team flashed their DPRK passports as they pushed through the crowds at the front gate to register on the expo's first day.

President Trump is clearly going to have to deal with a far more aggressive PRC, with an increasingly well-supplied military that is by all appearances begging for a fight. Conflicts in the South China Sea, the continued problems on the Korean peninsula, China's leader Xi Jinping being handed near-dictatorial powers—none of these bode well for a peaceful, cooperative future.

Reuben F. Johnson is a correspondent for IHS Jane's Information Group, a London-based defense and national security publishing house, and a frequent contributor to The Weekly Standard.
I

I really like his confusion about all the different air-defense systems displayed. And to be honest, I also cant understand the distinctions of QW-2/12/19 and FN-something series etc. There is so much overlap here, I feel that something is wasted.

Hendrik_2000 said:
Some one is really scare and dumbfounded by the proliferation of Chinese SAM and other weapon. Reuben Johnson is one of the better Chinese weapon analyst from IHS
What you guy think?

Standard neocon fare, and as funny as it sounds, it's not as alarming as some of the stuff we regularly see in the US main stream media.
S

Redundancy? Surely Mr. Johnson knows that a lot of that stuff is just a bunch of tech demonstrators, or bolt ons (after all, if someone put an Avenger turret on a Stryker vehicle, it doesn't mean that the US Army suddenly as a new air defense system. That probably wouldn't even be such a good mod or use of a perfectly good Stryker chassis).

In other words China has to ask permission to sell weapons to US's enemies while the US doesn't have to ask permission when it sells weapons to China's enemies. When one touts their military technology as superior, it's only natural the competition tries to sell their hardware as being able to counter it. Like US defense contractors haven't used depictions of Chinese military hardware for the sole purpose of selling them to China's neighbors? It's a pretty superficial complaint. It's laughable to suggest their 500lb bombs are designed for minimum casualties while Chinese 500lb bombs are not. Or their SAMs are designed to destroy an aircraft while Chinese SAMs are designed to kill the pilot. I remember some congressman charged Chinese nuclear weapons were designed to kill American children. Another one said when China sells any kind of conventional explosive weapon, that was selling weapons of mass destruction.

Most of the world's arms manufacturers [....] explain how the weapon is optimized to achieve its objective with the fewest possible casualties. Chinese weapons makers instead appear to be engaged in an endless process of multiplying the ways of indiscriminately killing and blowing up their enemies—real or imagined.
Click to expand...

Really? And this guy writes for Janes?
You must log in or register to reply here.