inside
New wings on Qatar F-15s pave upgrade path for USAF
Please, Log in or Register to view URLs content!

after I had read now

"... the Air Force is spending $2.7 billion more than planned over the next five years (almost $10 billion in total) to accelerate “Next Generation Air Dominance” (NGAD), a family of systems designed to ensure air superiority well into the century."

U.S. Air Force Secretary Heather Wilson, armed with the biggest infusion of cash for research and development the service has seen in years, is looking to pivot from the counterterrorism fight in the Middle East to preparing for a potential clash with China.

Key to that effort will be investing in maintaining air and space superiority as new threats emerge, Wilson said Feb. 21 during an interview ahead of the Air Force Association’s annual air warfare symposium here.

NGAD will include a “renewed emphasis” on electronic warfare, Wilson said, declining to elaborate.
China is without a doubt the “pacing threat” for the Air Force because it is rapidly innovating, Wilson stressed. While Russia also is a threat to its neighbors, it is not changing as quickly as China is, she said.

“When we look at what the Air Force has to do, the Air Force has to be prepared for either of those threats, but because China is innovating faster we consider that to be our pacing threat,” Wilson said.
In addition to accelerating NGAD, the Air Force is using the additional cash Congress recently approved for defense to pursue a hypersonic weapon capability through two separate prototyping efforts—the Hypersonic Conventional Strike Capability and the Air-Launched Rapid Response Weapon.

The Air Force also is investing in space superiority, as Russia and China develop capabilities that potentially can threaten U.S. access to and assets in space. The Air Force has decided to forgo the purchase of Space Based Infrared satellites 7 and 8, which warn against incoming missiles, because they are not survivable against emerging threats, Wilson said. Instead, the service will shift to a smaller, more agile constellation of satellites.

In the Middle East, the Air Force is committed to buying a new light-attack aircraft that not only will accomplish the mission of protecting troops on the ground in a more cost-effective way—freeing up fourth- and fifth-generation fighters to train for the high-end threat—but also strengthen ties with U.S. allies, Wilson said.

“The National Defense Strategy guides us to counter violent extremism at lower expenditure. It really doesn’t make any sense to me to have an F-22 destroying a narcotics factory in Afghanistan,” Wilson said. “But more than that, it is also an opportunity to engage with our allies on a platform that is designed to be coalition at the core.”
Click to expand...

"Raytheon and Lockheed Martin were awarded a contract under a foreign military sale for the delivery of Javelin weapon systems.

The deal, announced Thursday by the Department of Defense, is valued at more than $94.8 million under a modified contract. "As tensions with Russia continue to rise, Sweden has requested that the United States supply it with Lockheed Martin’s Patriot PAC-3 missile defense system. Stockholm would use the weapons to deter any potential aggression by Moscow.

and White House, Boeing In Final Stages of New Air Force One Deal
February 22, 2018
Please, Log in or Register to view URLs content!

President Donald Trump and Boeing are in the final stages of negotiating a multibillion-dollar deal for two new Air Force One airplanes, according to three people with knowledge of the discussions.

Trump met with Boeing CEO Dennis Muilenburg at the White House on Tuesday to try to close stalled negotiations between the Air Force — which is responsible for buying the planes — and the aerospace firm, the sources said.

Air Force leaders and Boeing have been negotiating the terms for the complex modification of the two 747 jumbo airliners that the military service bought from the company last summer. One person with knowledge of the deliberations described the negotiations as professional, but challenging.

Among the sticking points is the type of contract the government signs with Boeing. The Air Force wants to sign a fixed-price deal that would require Boeing to buy the planes at an agreed price, and then eat any cost overruns. Boeing signed a similar contract with the Air Force for new aerial refueling tanker aircraft in 2011. That refueling plane has run into numerous development problems costing the Chicago-based firm
Please, Log in or Register to view URLs content!
.

Trump and Muilenburg on Tuesday were able to break the gridlock that had stymied lower-level negotiations, the sources said. Although the deal has not been completely finalized, an announcement is anticipated soon.

The new Air Force One project, then estimated at $4 billion, was thrust into the spotlight 14 months ago when Trump, as president-elect, criticized it as being too expensive. “Cancel order,” he
Please, Log in or Register to view URLs content!
in December 2016. At the time, the Air Force had only previously awarded $170 million to Boeing for preliminary designs.

Since then, Trump and Muilenburg have talked several times. The president visited a Boeing 787 Dreamliner factory in South Carolina in February 2017, where he ended his speech by
Please, Log in or Register to view URLs content!
: “God bless Boeing.”

Soon after, Boeing and the Air Force began negotiating terms to begin the extensive modifications required inside the unique Air Force One aircraft, including conference rooms, a presidential office, and secure military communications that allow the president to stay in the chain of command and launch nuclear weapons, if needed.

The Navy Has a Plan That Could Make Sea Mines Nearly Obsolete... President
Please, Log in or Register to view URLs content!
on military parade: "I think it's great for spirit, the military loves it, they love the idea...we have a great country and we should be celebrating it." 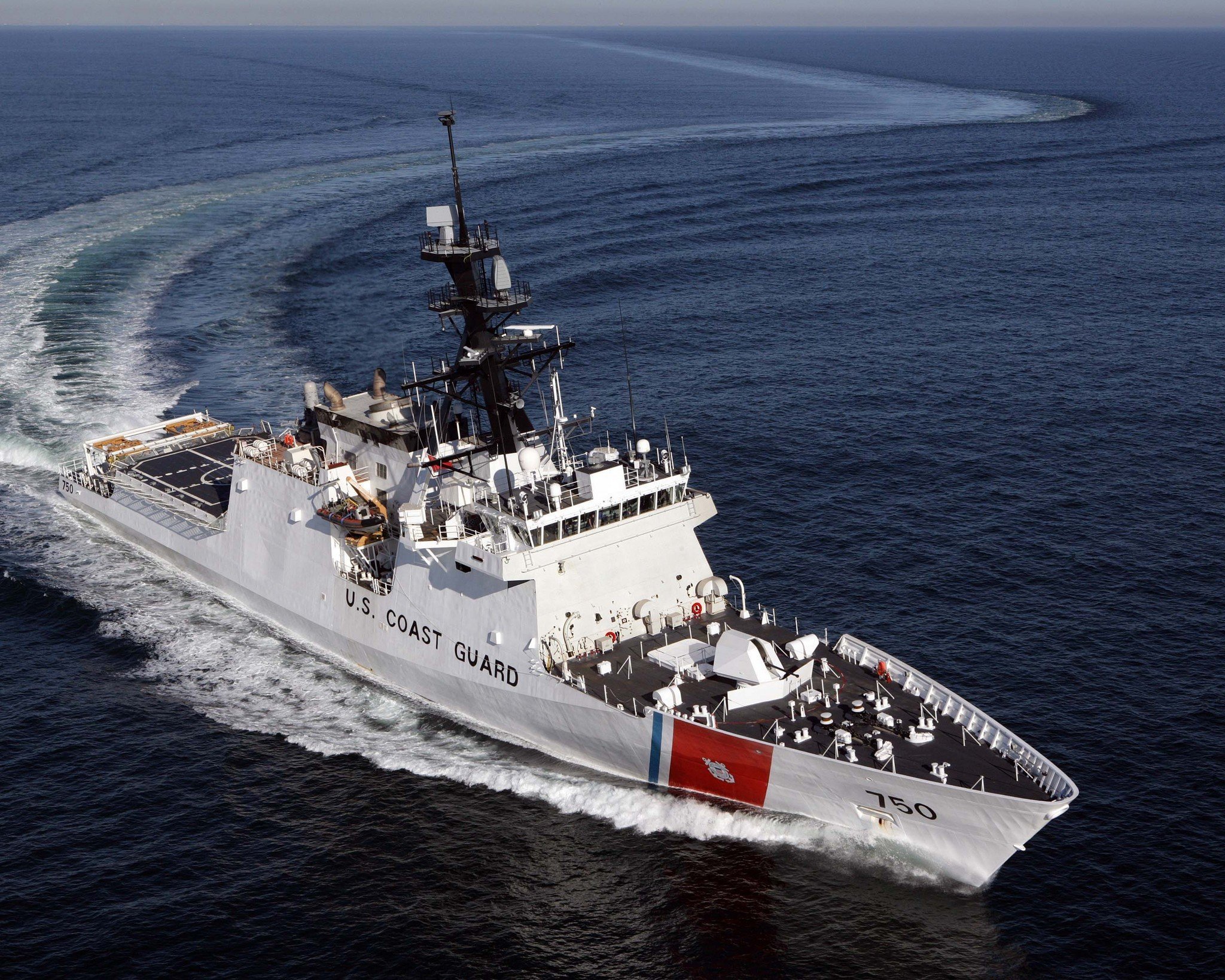 "The Trump administration and key Asian allies are preparing to expand interceptions of ships suspected of violating sanctions on North Korea, a plan that could include deploying U.S. Coast Guard forces to stop and search vessels in Asia-Pacific waters, senior U.S. officials said."

The goal was to assess whether the
Please, Log in or Register to view URLs content!
could safely operate when confronted by electromagnetic fields generated by equipment like radar.

The test showed that the tanker’s flight-critical and boom-refueling systems could withstand a 6-decibel electromagnetic pulse, but certain systems were uninstalled or deactivated before testing, according to the report.

“The configuration of the KC-46A used for EMP testing was intended to test the mission-critical functions of the aircraft to ensure it can continue to operate in an EMP environment,” Air Force Materiel Command officials told Air Force Times.

“The systems that were uninstalled or deactivated were not flight critical or required for aerial refueling operations,” the command said.

After the KC-46 was exposed to electromagnetic pulses, the results showed that these critical systems retained their functionality, according to AFMC.

“During a post-test functional flight, the boom operated successfully throughout its operating range (full telescope and movement) while the pumps filled the boom with fuel,” the command said. “The [refueling system] was also successfully trailed to full trail, filled with fuel, and fully rewound. The wing-mounted refueling pods were installed on the aircraft during the EMP test but were not tested during the post-test functional flight.”

AFMC said that as of now, there are no additional EMP tests scheduled for the KC-46.

One of the next steps is to assess how the tanker performs during nuclear threat-related tests. This includes an inherent hardness assessment and base escape study.

The base escape study is an analysis of the time required for a KC-46 to launch and fly a safe distance from a simulated nuclear attack.

The IHA and BES tests are scheduled for the second half of fiscal 2018.

In December, the FAA certified the 767-2C, which is the modified 767 commercial plane that forms the basis of the KC-46.

This Amended Type Certificate verifies that the fundamental design of the tanker is safe, and it’s one of two FAA certifications required for the tanker program. The Supplemental Type Certificate focuses on the military-specific equipment that’s installed on the 767-2C aircraft to make it a tanker.

In addition to the two FAA certifications, the KC-46 requires an Air Force-issued Military Type Certification that validates the airworthiness and safety of the military systems and equipment installed on the new tanker, AMC officials said.

The Air Force plans to buy 179 of the aircraft, and Boeing is contractually obligated to deliver the first 18 certified tankers by October.

now inside
US defense-industrial base study team on target to make recommendations, DoD official says
Please, Log in or Register to view URLs content!
:

"... Jerry McGinn, the principal deputy director for the Defense Department’s office of manufacturing and industrial base policy ...
left open the option to
Please, Log in or Register to view URLs content!
— something industry groups had resisted — at some later time. Survey plans were shelved because the government was running out of time to execute and it already had much of the data it needs, McGinn said.


“We have a wealth of information from across government that we’re using for this analysis,” McGinn said."
You must log in or register to reply here.