The Pentagon Just Revealed How Much It Spends Helping Foreign Militaries
Please, Log in or Register to view URLs content!
the topic is interesting, just they need to edit

now told them below that article, let's see what happens

The Navy wants to extend how far the F-18 can fly to counter China’s anti-ship missile advantage..

"The US Navy wants to increase the range of its aircraft so carriers can remain out of missile range, an apparent response to China's anti-ship defenses.

The Navy recently announced that it has awarded Boeing a $219,600,000 contract to build and deliver conformal fuel tanks for its air wings workhorse, the F/A-18 Super Hornet, as part of an emphasis on increasing fuel capacity and refueling ability.

Jura said:
"The assembly will be built on the composite warfare concept the Navy uses with its CSG." I'm ... puzzled PACFLT’s Swift: Amphib USS Wasp Will Deploy With Surface Action Group in 2017

The group will be led by amphibious assault ship USS Wasp which recently became the forward-deployed flagship of the amphibious force of the US 7th Fleet. Wasp left its homeport of Norfolk in August 2017, after undergoing upgrades which enabled the ship to land and launch the F-35B Joint Strike Fighter which will be a key element to the up-gunned ESG concept.

Dewey, along with an embarked helicopter maritime strike squadron, departed San Diego February 6 and has been operating under Amphibious Squadron (PHIBRON 11), the navy’s forward-deployed amphibious squadron, since arriving in the 7th Fleet area of operations.

“While Dewey has been in transit to the Western Pacific, our sailors have been training and executing drills to hone our readiness to support the Wasp ESG,” said Cmdr. Anthony Webber, Dewey’s commanding officer. “We are proud to be a part of this mission and to be working to enhance our navy’s expeditionary capability.”
Click to expand...

Air Mobility Command is looking forward to an eventful 2018 on its KC-46 program, where it can move beyond delays and testing issues, and get a ready aircraft on the ramp.

"I hope a year from now, I can say that we got an airplane that was war ready on day one," Maj. Gen. Thomas Sharpy, deputy commander of Air Mobility Command, told Air Force Magazine at AFA's Air Warfare Symposium last week.

The KC-46 program has hit extensive delays, including most recently identifying three "deficiencies" in testing that could impact the aircraft's operational suitability. Most seriously, testing showed that the KC-46's boom could scrape the stealth coating of aircraft such as F-22s or B-2s through "undetected contacts outside the receptacle."

Other deficiencies focused on high-frequency radios in the wings of the aircraft. The aircraft cannot broadcast during refueling because there is a risk of arcing from static electricity. Test engineers could not determine if the jet’s radios remained turned off during refueling events. This deficiency was recently downgraded to a point where the aircraft is acceptable for delivery, but Boeing will be required to eliminate risk and remains "contractually accountable," according to the Air Force.

Lastly, a KC-46 boom experienced an "uncommanded" boom extension on the ground, caused by a spike of pressure after fuel flow stopped. This should be resolved by the end of May with a software fix, according to the Air Force.

"Every time you acquire a new airplane, there's fits and starts," Sharpy said. While there are issues with the KC-46, it has been a "tribute to our discipline" that requirements have remained steady with the stated goal of getting a "war ready aircraft on day one," he said. That day should come this spring when the Air Force's first KC-46 is delivered to McConnell, he said.
Click to expand...

Jura said:
... the US 2000s procurement BLUNDER called 'concurrency' which I've been criticizing for some time (so I have quotes almost ready hahaha) Apr 10, 2016
and will keep criticizing perhaps forever LOL

... and now:
"Perhaps the most ground-shaking news of the press briefing today is that the program will, with Lot 11, put
Please, Log in or Register to view URLs content!
behind it. The program will no longer be building, testing and fixing aircraft all at the same time, Winter said. Last week an audit of production was finished, setting a production design standard. “Concurrency will be over,” he said."

Combat troops have been complaining about the M4 and M16 for years — now the Pentagon is doing something about it.... 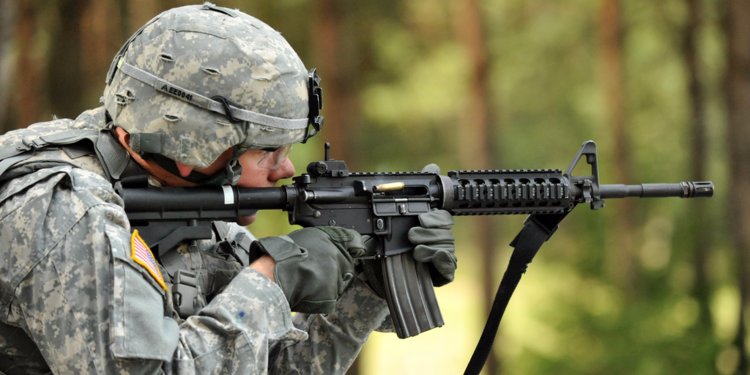 A US soldier fires an M4 carbine during US Army Europe's Best Warrior Competition in Grafenwoehr, Germany, July 31, 2012.
US Army/Markus Rauchenberger

"For decades, troops have been complaining about the limitations of the M16 rifle and M4 carbine, both of which are hindered by the same flawed operating system that makes the weapons jam easily. But after years of ignoring small arms in favor of expensive aircraft and warships, the Pentagon is taking a long, hard look at how to give the Army 11 Bang Bangs and Marine grunts a better weapon.

Defense Secretary James Mattis has ordered the creation of a task force to make American small arms more lethal to give infantry soldiers and Marines an extra advantage in the close fight, Pentagon personnel chief Robert Wilkie said. It has been decades since the Pentagon last looked at the combat effectiveness of small units." 
"The Trump administration told Congress on Thursday that it plans to sell Ukraine 210 anti-tank missiles to help it defend its territory from Russia, in a major escalation of U.S. lethal assistance to Ukraine’s military.

The long-awaited move, which lawmakers of both parties have been urging for years, deepens America’s involvement in the military conflict and may further strain relations with Moscow. It came the same day that Russian President Vladimir Putin announced his country has developed new nuclear weapons he claims can’t be intercepted by an enemy."

"Lockheed Martin has won a US$150 million contract with options for another US$942 million to develop and manufacture two high-energy laser weapons for the US Navy. The new systems will combine Lockheed's first-of-a-kind High Energy Laser and Integrated Optical-dazzler with Surveillance (HELIOS) system for defense against Unmanned Aerial Systems (UAV) with long-range Intelligence, Surveillance, and Reconnaissance (ISR) capabilities and is expected to be delivered for installation on surface warships by fiscal year 2020."

and here we go, the F-35 Bravo on duty aboard the Wasp,, this will be real airpower, on station and mobile to any nearby action area's, and they will have real back-up, so the Wasp is taking the lead on projecting 5th Generation Naval airpower into an operationally "hot" area, Semper Fi!

Air Force Brat said:
and here we go, the F-35 Bravo on duty aboard the Wasp,, this will be real airpower, on station and mobile to any nearby action area's, and they will have real back-up, so the Wasp is taking the lead on projecting 5th Generation Naval airpower into an operationally "hot" area, Semper Fi!
Click to expand...

as I said, it's going to be interesting to watch this development, 'CSG Lite'

centered on an LHD with F-35Bs

"For example, while the upgunned ESG won’t have an equivalent of a CSG’s E-2 Hawkeye airborne early warning radar aircraft, the F-35’s onboard sensors could expand the targeting ability of the three-ship SAG." (the sentence from the USNI News posted Nov 25, 2016)

hope it's obvious CSG Lite is my classification LOL!
You must log in or register to reply here.