Jura said:
is it [redacted] true

From Russia with Bullets: Why U.S. Special Forces Want Russian Machine Guns
Yes, this might happen.

Jura said:
if it's for special ops, then OK

in the morning I hadn't read beyond what I pasted Today at 7:56 AM
which left with an impression SOCOM had machine-gun issues

There is the pop culture notion that somehow Russian weapons are better, simpler, more reliable.
Fact is it's total propaganda.
The main reason for the myths is simply pop culture regurgitation of claims and stories that often have been fourth hand and weapons that are in poor condition.

Example Socom has issues early after 2001 with the M4A1 for example it eventually lead to them creating the SCAR program.
Well people started looking in to what was happening to the carbines and here was the revelation. SOCOM operators were taking the weapons they used in training to battle and they had this tactic of laying down full auto fire well breaking contact. So they were pouring magazines after magazines through the weapon in long bursts in training then taking these same weapons to battle.
Well the M4A1 (of the time) was the result of modifying a carbine meant for clerks and artillery and truck drivers who needeneeded to defend themselves but not a full battle rifle it was as a result not designed as a Machine gun. It was focused more with commonality with the large M16. So they took the weapon out of its intended tollarence and were heating up the barrel to beyond heat treating and it failed.
SOCOM and the Army changed to a heavier barrel around the same time SCAR L was entering field trails and what happened? The issue was fixed and the Socom operators said why bother with Scar L?
SCAR H was kept but that was because there was no 7.62x51mm battle rifle in service. SCAR L found homes abroad but not in SOCOM.

The AN/SPY-6(V) radar under development for the US Navy achieved a new milestone recently tracking a ballistic missile through intercept for the first time.

According to Raytheon, which is in charge of development and delivery of the new system, the radar detected, acquired and tracked multiple targets from the US Navy’s Pacific Missile Range Facility, Kauai, Hawaii.

Capitalizing on two unrelated exercises conducted nearby in mid-September, SPY-6(V) not only tracked multiple threats simultaneously but also a ballistic missile – through intercept.

The SPY-6(V) program has met all milestones, ahead of or on schedule, since its inception in January 2014, the company says. Now in production at Raytheon’s radar development facility, AN/SPY-6(V) remains on schedule for delivery to the first DDG 51 Flight III, the future USS Jack H Lucas (DDG 125), in 2019.

AN/SPY-6(V) provides greater range, increased accuracy, greater resistance to environmental and man-made electronic clutter, higher reliability and sustainability than currently deployed radars. The radar’s demonstrated sensitivity provides greater coverage for early and accurate detection which optimizes the effectiveness of the Navy’s most advanced weapons, including all variants of Standard Missile-3 and Standard Missile-6.

The inherent scalability of the radar – based on 2’x2’x2′ Radar Modular Assemblies, individual radar “building blocks” – allows for new instantiations without significant new radar development costs. Scaled variants of AN/SPY-6(V) already designated as US Navy programs of record, include the back-fit radar for existing DDG 51 Flight IIA destroyers, the new and backfit radars for aircraft carriers and amphibious ships, as well as the radar for the new guided-missile frigate, FFG(X).
Click to expand...

Please, Log in or Register to view URLs content!
Tyndall AFB battered and trashed after the Wrath of Michael. 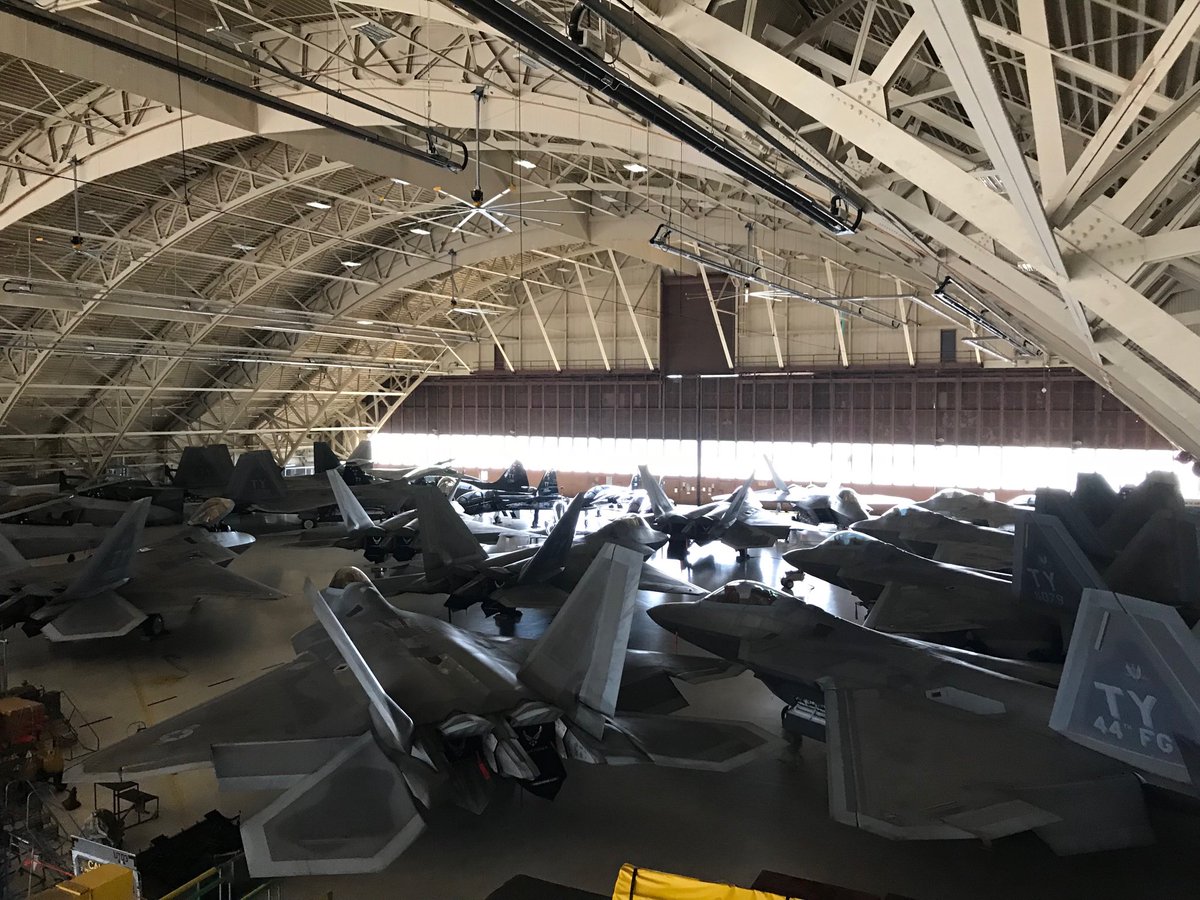 Navy Strategic Systems Official: Hypersonics ‘Coming to a Theater Near You’
oh really

“Hypersonics is coming to a theater near you,” Capt. Doug Williams, the SSP’s technical director, said at the third annual Triad conference.

“As part of a program of record within the Office of the Secretary of Defense, we [SSP] have been working a hypersonic glide technology demonstration,” Williams said. “We called it Flight Experiment No. 1. FE-1 flew about a year ago, Oct. 31. We took an old A3 [Polaris] rocket motor built in the late ’80s, made it a stack, and launched it off of Hawaii, flew it a couple thousand miles. It landed at Kwaj [Kwajalein Atoll].

“It was brilliant. The whole time we had telemetry pumping down. We saw everything in a virtual model, real time, and it was one of those things that makes your hair on the back of your neck stand up. And you stand up as you see the body do what the body did and the body land exactly where it was supposed to land. It was awesome,” he said.

Williams said that hypersonics is the No. 1 priority of Michael D. Griffin, undersecretary of defense for research and engineering.

“We’re leaning forward,” Williams said. “We have two more experiments to fly. We are working with the Office of the Secretary of Defense and with ASNRD&A [assistant secretary of the Navy for research, development and acquisition] staff to understand conventional prompt strike. For the Navy it is going to be indeed a program.”

Williams noted that even with the potential of conventional prompt strike, the primary mission of SSP is to provide a nuclear deterrence capability with the Strategic Weapon System. He cautioned that “if we don’t do that right, no one is going to care about CPS. We are on a path to ensure that we firewall this conventional capability. That, no doubt, will be a heavy lift. We cannot have CPS drain Trident [the Navy’s submarine-launched ballistic missile program].”
Click to expand...

Jura said:
now
Replacing the Bradley is the top priority for the Army’s next-gen combat vehicle modernization team
Please, Log in or Register to view URLs content!
Click to expand...

Jura said:
Tuesday at 7:55 AM
now fancy ideas about tanks (lasers etc.) inside

Geez Jura perhaps... I know this is a shocker he was being snide? I mean what if what he meant was they don't have a sold idea yet but was willing to hear any idea that is feasible? May that means a MBT or a IFV hull with a tank gun or if rail gun tech suddenly becomes viable.

Jura said:
Tuesday at 7:55 AM
now fancy ideas about tanks (lasers etc.) inside

now what Military.com had to say:
Army Wants Bradley Replacement to Vastly Outgun the Enemy
Please, Log in or Register to view URLs content!

Current combat vehicles owned by peer competitors include the Russian BMP3, which features a 100 mm main gun. And "104 countries have the 30 mm," said Brig. Gen. Ross Coffman, director of the
Please, Log in or Register to view URLs content!
Cross-Functional Team.

"If we want next-generation, I personally do not want to modernize to parity; it makes no sense," Coffman told an audience last week at the 2018 Association of the United States Army's Annual Meeting and Exposition. "We must modernize to establish standoff; our soldiers deserve standoff."

"The M1 tank still has a lot of upgrades that it is capable of putting on board, but the Bradley is at [the end of] its life," Coffman said. "The bottom line is, anything is on the table. We want industry feedback for decisive lethality; if that is run by a flux capacitor, hovers and has a ray gun, and we can make that work at a reasonable cost, absolutely."

The Army continues to plan industry days to learn from defense firms "what is in the realm of the possible, so we can make a decision on firm requirements moving forward," Coffman said. "The technology may not be there, but we must maintain the ability to upgrade our equipment in a dynamic fashion to always have standoff against our enemy."

Coffman added that experimenting and prototyping, once started, will not end.

"It's a continuous line because, as we field the new vehicles, we want to continue to roll in those technologies that we can afford," he said. "Because, as I said, we cannot modernize to parity, and our potential enemies are going to try to catch up."

Army leaders plan to make a decision in 2023 on whether the service wants to develop a future tank, Coffman said.

"I did not say replace the M1 tank," Coffman said. "What is going to be our decisive lethality platform? That is what is very, very important to us is to have that capability; it doesn't have to be a tank. It just has to be decisive and lethal."
Click to expand...