Obi Wan Russell said:
After lots of negative comment about the Type 45 DDGs all being alongside in Pompey and unable to operate in warm waters like the Gulf or the Med, it seems the truth is somewhat different...

The Type 45s, like the ZUmwalt, the FOrd, and the US LCS were all brand new design.

They had birthing pains as the Astute are.

Now, the Burke IIIs I expect are going to have a fairly clean roll out as they are basically upgrading power and radar with everything else being pretty much the same.

The Virginia class has had a stellare roll out and the US is building them in large numbers. 17 hae already been launched and they are coming in ahead of schedule and below budget.

Lockheed Martin UK Chief Executive Peter Ruddock said, “To date, the F-35 program has generated $12.9 billion (pounds figure) in contracts for British suppliers and that investment will grow as we ramp up towards full rate production. ..."

The Defence Secretary Gavin Williamson experienced the world-class technology of the new F-35 today in a Lockheed Martin F-35 simulator in London.

At an event held at the Institute for Engineering and Technology, the Defence Secretary was joined by MPs and journalists to see what it is like to fly and land the pioneering fighter jet which will protect British lives around the world.

The global F-35 programme will support 20,000 UK jobs over the 30 year production period and already the programme has generated over £9 billon for UK industry. The cockpit demonstrator gave the Defence Secretary a feel for flying the new state-of-the-art stealth aircraft, allowing him to practice landing and taking off from the new aircraft carrier HMS Queen Elizabeth.

After flying the jet demonstrator, Defence Secretary Gavin Williamson said, “Today demonstrates that we are investing in our brave Armed Forces by making sure they have the very best equipment, securing tens of thousands of British manufacturing and engineering jobs, and ensuring Britain will always play a leading role in making the world a safer place.

“These pioneering stealth jets will protect British lives as we face intensifying and evolving threats at home and abroad.

“The F-35 is the most advanced and dynamic fighter aircraft in our history, and will defend this country from terrorists, collect crucial intelligence, and safeguard our national interests from those who seek to do us harm.”

The Defence Secretary was guided through the flight by Squadron Leader Andy Edgell and Lieutenant Commander Adam Hogg, two of the UK’s F-35 pilots putting the aircraft through its paces over in the United States. Alongside its short take-off and vertical landing capability, the F-35B’s unique combination of stealth, cutting-edge radar, sensor technology, and electronic warfare systems provide world-beating capability of a fifth-generation fighter.

The UK currently has 14 F-35s based in the US, operated by around 150 UK personnel. These aircraft will arrive in the UK later this year at RAF Marham and initial flight trials will take place from the UK’s new aircraft carrier, HMS Queen Elizabeth, in autumn off the coast of the US.

During his visit to the cockpit demonstrator, the Defence Secretary also met with representatives from some of the 500 UK companies who are in the F-35 supply chain. UK industry will provide approximately 15% of each F-35 to be built and, with more than 3,000 aircraft projected, the program will support 20,000 UK jobs over the 30 year production phase.

Lockheed Martin UK Chief Executive Peter Ruddock said, “To date, the F-35 program has generated $12.9 billion (pounds figure) in contracts for British suppliers and that investment will grow as we ramp up towards full rate production. The F-35 will provide the UK Armed Forces with a game-changing capability that will allow the Royal Navy and Royal Air Force to project power around the world for decades to come.”

Operated jointly by the Royal Navy and Royal Air Force, the F-35 Lightning jets will fly from both land bases and the UK’s new aircraft carriers. The program is on target to achieve Initial Operating Capability (IOC) by December 2018, meaning that UK F-35s will be able to operate from land bases from this point.

Following successful trials on the land based ski-ramp design, which is featured on the UK flagship carrier, and with RAF Marham runway intersection infrastructure now complete as part of a £250m major investment program, the UK has made significant progress over the last year in preparation for the F-35 arrival later this year.
Click to expand...

it's the SDF here so:
"... But in the face of mounting threats abroad, and the necessity for a democratic country to take an active role in combating the spread of authoritarian Chinese influence in the developing world, a new Entente Cordiale, as some journalists have put it, would benefit not only Britain and France, but the world."
The New Entente Cordiale: An Alliance for the 21st Century
January 22, 2018
Please, Log in or Register to view URLs content!

Jura said:
it's the SDF here so:
"... But in the face of mounting threats abroad, and the necessity for a democratic country to take an active role in combating the spread of authoritarian Chinese influence in the developing world, a new Entente Cordiale, as some journalists have put it, would benefit not only Britain and France, but the world."
The New Entente Cordiale: An Alliance for the 21st Century
January 22, 2018
Please, Log in or Register to view URLs content!


Asked on: 06 December 2017
To ask the Minister for the Cabinet Office, when he expects the review of the National Security Strategy to be published.

Answered on: 12 December 2017
The review of our national security capabilities is currently taking place in support of the ongoing implementation of the 2015 National Security Strategy (NSS) and Strategic Defence and Security Review (SDSR). Ministers will consider the conclusions of the review in due course.
Click to expand...

the latest I noticed:
"The security element of the review is expected to be unveiled by the government in the spring."
inside
Auditors say Britain can’t afford its 10-year defense equipment plan
Please, Log in or Register to view URLs content! 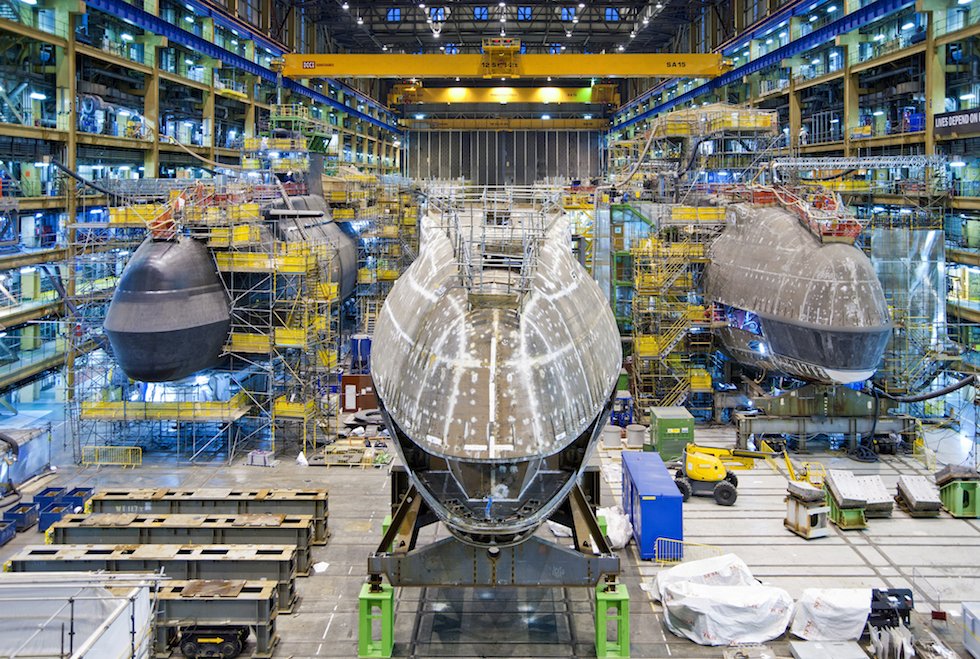 
The final four of seven Astute-class attack submarines being built for the Royal Navy by BAE Systems at its Barrow-in-Furness yard saw costs rise by £516 million over the course of the last year, the MoD recorded in its project performance summary, which was published as part of the 10-year defense equipment plan Wednesday.

The Warrior capability sustainment program saw its costs rise by £136 million during the year as a result of issues surrounding the new 40mm cannon being fitted to the vehicle by prime contractor Lockheed Martin UK.

The MoD said the cost rise on the submarine program was sparked by a number of factors including increased building schedules for the final four Astute-class boats now being tested or built at the yard in northwest England.

The fourth boat to join the fleet, HMS Audacious, completed a test dive in the basin of the BAE yard last month and is expected to be handed over to the Royal Navy toward the end of the year.

The cost of the four submarines is now forecast to come in at £6.69 billion, some £836 million more than when their build was approved.

Like the submarine, the Warrior capability sustainment program was hit by cost and schedule delays last year.

Costs on the Warrior update increased £136 million over the year, taking the expected total cost of the program on current forecasts to £1.48 billion.

The MoD put the latest cost increase down to “technical and engineering challenges associated with the new cannon build standard” on the updated vehicle.

Lockheed Martin UK distanced itself from the cost increase, saying the cannon wasn’t its direct responsibility.

“We don’t recognize the figure of £136 [million] ―the cannon is GFE [government-furnished equipment] and any inquiries would have to be directed to the MoD,” a company spokesperson said.

The Warrior upgrade, which includes a new turret and other modifications, is using a new type of 40mm cannon known as the cased telescoped weapon system developed by CTA International, a joint venture between BAE Systems and Nexter.

The weapon has also been ordered for the British Army’s Ajax armored reconnaissance vehicle program being led by General Dynamics UK.

Lockheed is also leading the turret work on that program. The French Army has also ordered the cannon system.

Lockheed Martin UK reported last week that it was continuing to make progress on the program and had delivered eight of the upgraded fighting vehicles to the British Army’s armored trials and development unit for qualification and verification trials over the next year.

The company spokesman said Lockheed was on track with the program and had met every development contract milestone so far.

The MoD and Lockheed Martin continue to negotiate over the manufacturing contract for the Warrior. The company declined to comment on the status of the talks.

Data released by the MoD showed the in-service date for the upgraded Warrior vehicle as 2022 ― 39 months behind the original schedule.

The MoD said in the report that the delay to the Warrior capability sustainment program “is directly tied to the cost increase” issues around the cannon.

Overall, with several programs achieving price reductions, the aggregate cost of the 28 programs under review rose by £358 million, or 0.8 of the total cost.

That’s a deterioration compared with 2016 when major program costs rose by £237 million.

One of the longest delays was on the Project Marshall program being run by Thales UK and the National Air Traffic Service primarily to upgrade air traffic services on air bases in the U.K. and abroad.

The MoD reported a two-year delay on the program and said the in-service date has now been pushed back to June 2019.

Thales and NATS won the contract in 2014. The deal is expected to be worth about £1.5 billion and run for 22 years.

The MoD report said they were protected from cost overruns by the contract terms.

The cost and time overruns are a fraction of the problems defense procurement has run into. For example, in 2001, costs on the 20 largest programs rose during the year by 6.6 percent, and delays totaled 557 months, the National Audit Office reported.

Until 2015, major defense programs’ cost and time performance were independently verified by the National Audit Office, the governments spending watchdog, but the effort was axed, and for the last two years a much reduced report has been published by the MoD itself.
Click to expand...

and
One of our submarine orders is missing
February 5, 2018
Please, Log in or Register to view URLs content!

doubt anybody in this thread would read the article, so just the chart from inside:

Jura said:
... doubt anybody in this thread would read the article, so just ...
Click to expand...

Reflecting on the demise of HMS Ocean
February 9, 2018
You must log in or register to reply here.