The collapse in the value of the pound against the dollar has had only a minor impact on the British defense budget over the short-term and for the moment is not big a problem, according to the Ministry of Defence’s top civil servant.
“The hit on the near-term budget is in the small tens of millions of pounds…. It’s not a big issue,” Stephen Lovegrove, the permanent secretary at the MoD, told reporters during a briefing during a visit to Washington earlier this week.
The pound dropped in the wake of the vote to leave the European Union last June. It currently hovers at around $1.21 and has been weakening in the last few days. The MoD’s report and accounts for 2015-16, page 148, shows the Bank of England currency hedging on behalf of the defence department for this financial year at $1.56 to the pound and $1.59 the previous financial year.
Last year the Royal United Services Institute think tank reckoned a weak pound could cost an already stretched defense budget £700 million annually if the currency doesn’t recover against the dollar, and the Euro, against which Sterling has also weakened.
The MoD is a major buyer of US equipment, most notably the F-35 fighter. But the last nine months has also seen the exchange rate become even more crucial with significant purchases of additional US made kit being made by the British.
Boeing’s P-8 maritime patrol aircraft and Apache attack helicopters and General Atomics Certifiable Predator unmanned air vehicles have all been selected by the British and a deal is in the works to purchase Joint Tactical Light Vehicles from Oshkosh.
“We have a very prudent hedging program with the Bank of England and the Treasury and feel comfortable we’ve managed to mitigate most of the currency risk there. We certainly have thought about what might happen if the pound stays at its current low levels in three or four years time and clearly there would be some effect,”said Lovegrove.
“How that gets defrayed , whether or not that that activity will have to be undertaken through the Treasury, whether we seek to renegotiate [contracts] these things are a couple of years hence,” he said.
“We have no concrete plans to do anything, it’s three years off, we are hedged for three years…. There will no doubt be moments when we have to take decisions but when that is will be the subject to a set of crystal balls.,” said Lovegrove.
The principal goal at present is to fulfill the 2015 defence and security review, he said.
Lovegrove was making his first trip to Washington since being appointed defense permanent secretary last year. The official, who has day-to-day responsibility for running the MoD, including the £36 billion budget, said that one of the items on the agenda for his visit was to discuss potential global challenges from nations like Russia and North Korea.
Click to expand...

Defense Secretary Michael Fallon had already advanced in 2015 that Britain would spend $ 187 million over the next ten years to renew and strengthen the Falkland Islands' defenses. 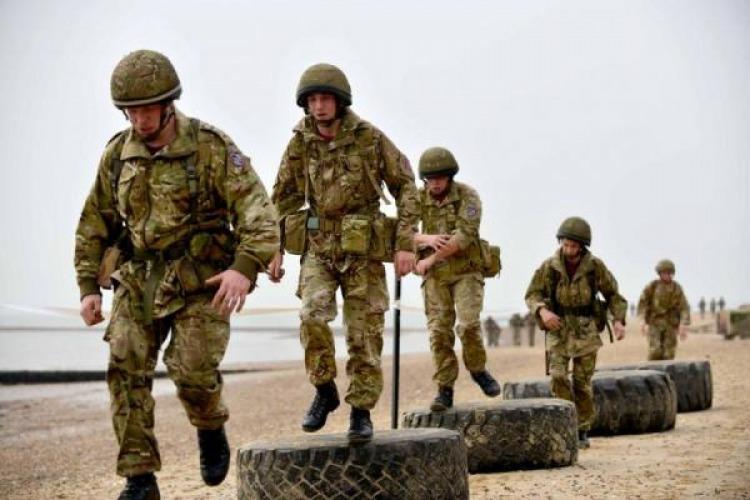 WOW! Very nice. Four Storm Shadows will put a lot of hurt on someone.

Nice to see them carrying four of them.

With Typhoons on guard and this new air defense system, the Falklands are being well defended.

Especially since the government in Argentina have really messed up their own military, and particularly their Air force.

The A-4 was effective 30 years ago...now they will not even have that and do not appear to be planning to get anything else.

So, while the UK, even though itself is a shadow of what it was in the 1980s, it stall have premier equipment and they are placing just enough of it in the Falklands (I mean they have like four of the modern Typhoon at RAF Mount Pleasant there, right?) in order to ensure that those islands remain safe in UK hands.

And though they have an OPV based there (HMS Clyde, which is supposed to be rplaced by a new Batch 2 River Patrol vessel when they come out), they regularly rotate an SSN, and a Type 45 DDG through there every so often to make sure that everyone knows that they are prepared if necessary.

March 12, 2017
Defence procurement: where has it all gone wrong?
Please, Log in or Register to view URLs content!

"... MoD has allowed technical risks to accumulate towards the end of the equipment acquisition cycle where they suddenly morph into ‘show stopping’ risks and come to the fore immediately after the main investment decision has been taken (never before), forcing Abbey Wood Team Leader to raise Contract Amendments and/or let short-term, renewable Post Design Services contracts which, in turn, has led to MoD getting appallingly poor value for money these last several decades."

'too big to fail' then, after the fanbois were fed candy world pictures by vendors and brass of what "eventually" "will" "change the paradigm" [rant redacted]

Jeff Head said:
Especially since the government in Argentina have really messed up their own military, and particularly their Air force.
Click to expand...

I believe the key phrase here is “Shot themselves in the foot”!

Jeff Head said:
The A-4 was effective 30 years ago...now they will not even have that and do not appear to be planning to get anything else.
Click to expand...

No replacement was found for the Mirage aircraft and now the refurbishment program that would have taken the A-4AR to 2028 has also been canceled. Just the other day the re-engine program for the IA-58 Pucara was canceled after 12 units. And the 40 IA-63 Pampa airframes are built but no engines or avionics have been ordered.

I will buy some balsa wood gliders to donate to the FAA this month.

VIP Professional
The UK 'stands up' it's first F-35B sqn, and it's a Navy one too!

VIP Professional
Just to elaborate on my previous post, the four F-35B 'Ground Training Aids' are being used on the deck of HMS Siskin (R01) at RNAS Culdrose in Cornwall, which has been used as the RN's 'dummy deck' since the sixties at least. It's part of the School of Aircraft Handling, a vital component of operating aircraft at sea. It's not just about pilots, the ground crew have to be able to work and marshal big heavy and noisy aircraft in a very limited space at sea, and the school normally uses older airframes that have been retired from frontline service but are still in ground running condition (the engines work and the can taxi under their own power).

Back in the 60s and 70s the deck (a concrete part of the apron) was painted to simulate HMS Victorious, but by the 80s a new deck was built to simulate an Invincible class carrier. During the earlier period a variety of aircraft types were used including Sea Vixens, Sea Hawks, S1 Buccaneers and Wessex helicopters amongst others. By the 80s, due to the lack of spare Sea Harrier airframes retired ex RAF Harrier GR3s were used, modified with tie down points on the undercarriage. Sea Kings became available, and were later followed by early prototype Merlins and Lynxs, which were used on an extra part of the deck which simulated a destroyer/frigate helipad:

The Deck has now been enlarged to simulate the aft end of a QEC. The 8 Sea Harrier FA2s are to be retained for the foreseeable future, as the provide a realistic noise level (which the GTA F-35Bs cannot) for trainee deck crew. The RN isn't the only carrier operator to do this, France has a similar facility with the outline of CdG, and even Argentina still has a deck simulation of 25 de Mayo, even though that ship went to the Breakers in 99:

Other carrier operators will of course have their on facilities. My point being it takes a lot more than hot shot pilots to fly from a carrier, and in answer to critics of the RNs efforts to regenerate carrier capability with the QECs, what counts is the people. The guys and girls who will sail in the new ships are not rookies, in addition to training they have received at shore based facilities like these, most will have served an exchange tour with our allies the USN and MN, as well as those currently still doing the relevant jobs aboard HMS Ocean. They have the necessary skills and experience because they are doing the job right now.
You must log in or register to reply here.