Obi Wan Russell said:
In addition to the Type 23s listed above HMS Ocean received Artisan at her last refit and it was also installed on HMS Queen Elizabeth a few months ago, I imagine when Ocean is decommissioned that unit will be recycled to another ship, possibly one of the amphibs?
Click to expand...

Heck, with the 2087 Sonar, the Type 997 Artisan 3D Radar, and the CAMM(M), these vessels could be very relevant for quite some time...and of course they will have to be, because it will take several years to replace all of them with the Type 26 once they start in.

A Type 23 with the newer Merlin mod helos aboard is probably as good an ASW platform as exists on earth.

No question about it RAF gets a huge share of the budget very modern equipment numbers on the low side with A400 orders they should have ordered more, France has 50 on order and Germans 53 units even Spain with 27

Other advanced equipment they can bring to the table are

Registered Member
RAF is the big winner of the last SDSR after Navy maintain same Fleet about.
But Army go for 82000 pers 5 years ago had 100000 and lost a Mech Brigade, also 16th Air Assault Br decreases compensate by reserve Brigades but not completely in fact...

Same as USA Navy privilegied some MSC in more normaly but different coz do it for their new Strategy in the Pacific area.

From Desert Storm with the Air Power and Western politic for 0 losses which is not really realistic elsewhere Ground Forces are the least favored.
S

Registered Member
Not much info in this BBC video about engine problems in the Type 45 class. Can't even tell if it is a design issue or hardware. Almost sounds like a case of not enough power but it is too vague.

Please, Log in or Register to view URLs content!
The Royal Navy's most modern warships are to be fitted with new engines because they keep breaking down.

In an email seen by the BBC, a serving Royal Navy officer wrote that "total electric failures are common" on its fleet of six £1bn Type 45 destroyers.
The Ministry of Defence said there were reliability issues with the propulsion system and work to fix it would be done to ensure "ships remain available".
One Royal Navy officer said the cost could reach tens of millions of pounds.
In a statement, the MoD told the BBC that to "address some reliability issues" it was considering options to "upgrade the ships' diesel generators to add greater resilience to the power and the propulsion system".

VIP Professional
...And right at the end they say it's the diesel generators that have problems, Not the ship's ENGINES which are the RR MT30 Gas Turbines. Storm in a tea cup time again.

At a ceremony in Bristol the company marked the completion of a successful factory acceptance test for the first MT30 Gas Turbine for the
Please, Log in or Register to view URLs content!
, in the presence of the Minister for Defence Procurement Philip Dunne MP, and representatives of prime contractor BAE Systems.

As the first ship’s company, the team will work alongside their industry partners over the coming years to learn about the ship, the equipment and the technological advances as she progresses through her build programme, ahead of sea trials, expected in 2019.

Captain Simon Petitt, the Senior Naval Officer of both Queen Elizabeth Class carriers said: “It is an honour to be in charge of a small but rapidly growing team. This is day 1 for the men and women who will serve in HMS Prince of Wales and I wish them every success in their journey.”

“Over 3 years ago, I had the privilege to welcome the first members of HMS Queen Elizabeth. Then only 10 in number, the Ship’s Company is now 370 strong.”

HMS Prince of Wales stands in Rosyth along with her sister ship HMS Queen Elizabeth.

The two ships are expected to serve Britain for the next 50 years, projecting fighting power at sea and over land, protecting UK interests around the globe.

Defence Minister Philip Dunne said: “I am delighted to see HMS Prince of Wales coming to life and welcoming her first crew on board. Both she and her sister ship, HMS Queen Elizabeth are well on schedule to enter full service as the largest and most advanced aircraft carriers ever built for the Royal Navy.”

“From today, HMS Prince of Wales will be home to a growing complement of personnel, offering a clear demonstration of how our £178 billion investment in equipment is securing a bright future for our Armed Forces.”

Both ships are being delivered by the Aircraft Carrier Alliance, a unique partnering relationship between BAE Systems, Thales UK, Babcock and the Ministry of Defence.
Click to expand...

Naval Today said:
The Royal Navy has said their new strike fighter will make its UK debut later this year.

The F-35B Lightning II stealth jet which will fly from the Queen Elizabeth-class aircraft carriers is due to appear at the Royal International Air Tattoo at RAF Fairford in July.

Royal Navy personnel are currently testing and evaluating the new jets as part of 17(R) Squadron at Edwards Air Force Base in California.

The F-35B will be flown by the United States Marine Corps and, as well as a flypast, will demonstrate the vertical landing capability of the new jet.

The UK government recently announced plans to speed up the purchase of 24 of the combat aircraft, a decision that will see two front-line squadrons – 809 NAS and 617 Squadron RAF – operating from the UK’s two new aircraft carriers by 2023.

The F-35B’s appearance will be the latest in a long list of military aircraft that have made their UK debut at RIAT.

Air Tattoo Chief Executive Andy Armstrong said: “No doubt, the sight of F-35s in the sky will be quite common for future generations but this summer, all those who attend our air show will enjoy a first glimpse of that future.”

“I am sure many people will want to join us to witness this piece of aviation history being made.”

The Air Tattoo is staged annually in support of the RAF Charitable Trust.
Click to expand...

Obi Wan Russell said:
...And right at the end they say it's the diesel generators that have problems, Not the ship's ENGINES which are the RR MT30 Gas Turbines. Storm in a tea cup time again.
Click to expand...

that's what you say but:

"The Type 45 uses a pioneering system called Integrated Electric Propulsion (IEP). There are many advantages associated with IEP, fuel efficiency, flexibility in locating the engines and a supposedly reduced maintenance and manning requirement. In basic terms, two WR-21 gas turbines (GTs) and two Wartsila 2MW diesel generators provide AC power for the motors that propel the ship as well as the power for the ships systems – weapons, sensors lighting etc. The WR-21 GTs were designed in an international partnership with Rolls Royce and Northrop Grumman Marine Systems. The turbines are of a sound design but have an intercooler-recuperator that recovers heat from the exhaust and recycles it into the engine, making it more fuel-efficient and reducing the ship’s thermal signature. Unfortunately the intercooler unit has a major design flaw and causes the GTs to fail occasionally. When this happens, the electrical load on the diesel generators can become too great and they ‘trip out’, leaving the ship with no source of power or propulsion."

"The funding for the “Type 45 machinery improvement package” was agreed in the November 2015 SDSR and at least the problem has finally been recognised and funds are in place. Each vessel will have to be dry-docked, large openings cut in the hull and two new diesel generator sets slid into place." 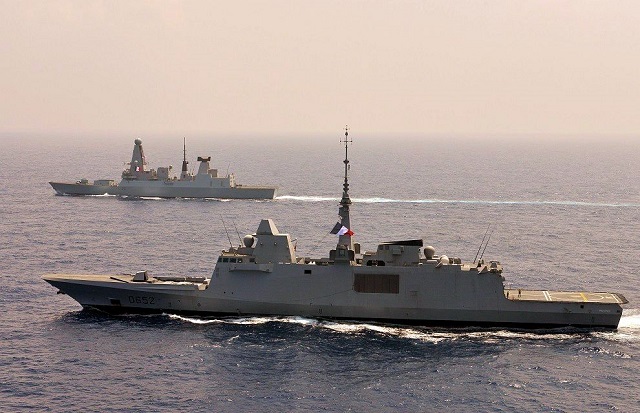