That would mean that Taiwan is currently paying virtually 100% of its defence budget on personnel costs. That clearly cannot be the case, otherwise Taiwan wouldn't be able to pay for any of the military equipment that hasn't just been ordered but is also arriving/being produced there. It wouldn't even be able to pay for fuel.

To pay for a professional military, you generally need to spend about 150-200% of GDP per capita per person.
Click to expand...

I mean, I hear that in the US the cost of maintaining personnel is very high. Perhaps it's just a thing for a number of countries where there's too much money sloshing around and people don't think carefully enough about what's necessary and what's not. Relatively speaking a lot of US personnel are treated as kings and queens with access to all sorts of luxuries on their doorsteps, whereas their British counterparts have to make do with a lot less (and always have done).
Last edited: Aug 17, 2019
G

Mr T said:
Plus there's increased worry about China, Russia and Japan (although the latter is more through misplaced nationalism).
Click to expand...

Russia as a realistic threat to South Korea?
Really, simply no.

Gloire_bb said:
Russia as a realistic threat to South Korea?
Click to expand...

Read what I said. Increased worry about. 1% is an increase.
G

Mr T said:
Read what I said. Increased worry about. 1% is an increase.
Click to expand...

Russian capabilities in the Far East in relation to Korea continue to go down, if anything. As steady as Pacific fleet continues to lose remains of offensive capabilities even appliable against a nation without adjustent border.

Russia has always eyed the Korean peninsula since it has good harbors that does not freeze.
That is the main reason for the Ruso-Japan war.

by the way I noted through NavyReco who's back (he runs NavalNews, currently one of the best naval sites, and this the related story:
Please, Log in or Register to view URLs content!
) I mean hypothetically he might want to post this himself here;
in short, giving credit where credit is due

if finished and deployed, should be good for preparing 'welcome to Taiwan' hahaha
:

Jura said:
Yesterday at 10:07 PM
and
Trump administration to go ahead with US$8 billion sale of F-16 fighter jets to Taiwan, angering China
Updated: 4:24am, 17 Aug, 2019
Please, Log in or Register to view URLs content!
Click to expand...

The US' potential sale of F-16V fighter jets to the island of Taiwan is a serious provocation that may lead to strong responses from China, including further military drills and economic countermeasures, Chinese experts said on Sunday.

The US is moving forward with an $8 billion sale involving 66 F-16V fighter jets to Taiwan, the New York Times reported on Friday.

This is the second time recently that the US indicated it would make arms sales to Taiwan. In July, the US approved sales worth $2.22 billion to the island, including 108 M1A2T Abrams tanks and 250 Stinger portable surface-to-air missiles, CNN reported.

This potential arms deal is more aggressive and provocative than the last one, not only because of its higher value, but also because of the tactical purposes the weapons could serve, analysts said.

Unlike the tanks, which will likely become nothing more than targets for the People's Liberation Army's aircraft and missiles, the F-16Vs could have a chance to threaten the mainland's military forces, as they are equipped with advanced AESA radars that can detect targets farther away and enable the fighter jet to launch mid-range air-to-air and anti-ship missiles, Wei Dongxu, a Beijing-based military analyst, told the Global Times on Sunday.

The Chinese mainland's fighter jets such as the J-10B and J-10C are capable of rivaling the F-16V, not to mention the fact that the F-16V is no match for the mainland's J-11 and J-20, military observers said, noting that the mainland could also destroy Taiwan's air fields and command centers to nullify their fighter jets.

The US intends to add more unstable factors to the Taiwan Straits to pin China down in the game between the two countries, playing all cards available to them, Wei said, noting that US arms companies will also earn large amounts of money from the sales.

If the F-16V sales become a reality, "the Chinese side will surely make strong reactions, and the US will have to bear all the consequences," said Foreign Ministry spokesperson Hua Chunying on Friday.

After the US approved the tank and missile sales in July, China conducted military exercises in waters near the island of Taiwan. China also announced sanctions on US enterprises participating in the sales.

More military exercises and economic measures are also on the table, Wei predicted.

Some Chinese military observers suggested that China should block the shipments, but Wei said it could be "technically difficult" to tell which ships or transport planes are being used to transport the weapons.
Click to expand...

also peculiar is to say "... the mainland could also destroy Taiwan's air fields and command centers to nullify their fighter jets." and put in this picture: A US-made F-16V fighter jet takes off from the freeway in Changhua county, Taiwan, as a crowd takes photos during the annual Han Kuang drill on May 28, 2019. Photo: AFP
Click to expand... 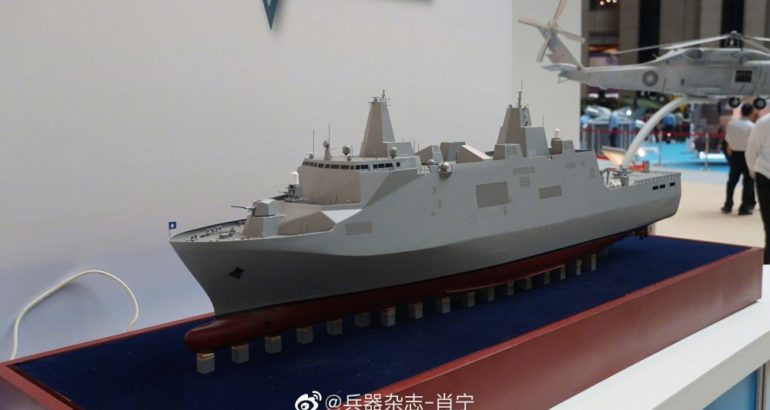 The latest Taiwanese naval projects were showcased at the 2019 Taipei Aerospace & Defense Technology Exhibition (TADTE) which was held this week in Taiwan: A new LPD project, a mine-laying ship and the flight II of the well known Tuo Chiang-class corvette.
Click to expand...

After the "air defense LHD" from Qatar, here is the "surface combatant LPD" from Taiwan...

After the "air defense LHD" from Qatar, here is the "surface combatant LPD" from Taiwan...
Click to expand...

as I can see, you indeed visited this thread, NavyReco