Klon said:
Most of these programs were about taking the US another generation ahead from already being in a position of technological leadership. From this perspective, it's understandable they took more time and money than following established concepts and making smaller improvements would have.

Additionally, for the F-35 the price has been kept under 90 million dollars per plane, which is very reasonable considering the capability.
Click to expand...

Given the cadence of China’s military development, the failure to successfully onramp to the next generation of weapons technology, despite the massive lead time the US started with, is not an encouraging sign. In a lot of fields China is already reaching parity or preparing to leapfrog. I wouldn’t interpret stillborn programs as taking the time and money to look outside established concepts. Anyways. We should move this discussion elsewhere if we want to continue.
Last edited: Feb 2, 2018

I read a comment to an article this morning that charged that it was fake because the ship had American numbers and not Chinese. Dead giveaway...

AssassinsMace said:
I read a comment to an article this morning that charged that it was fake because the ship had American numbers and not Chinese. Dead giveaway...
Click to expand...

Yes I read that one too hilarious
I

You can find examples of low IQ twits all over the internet, so this isn't exactly a shocker. 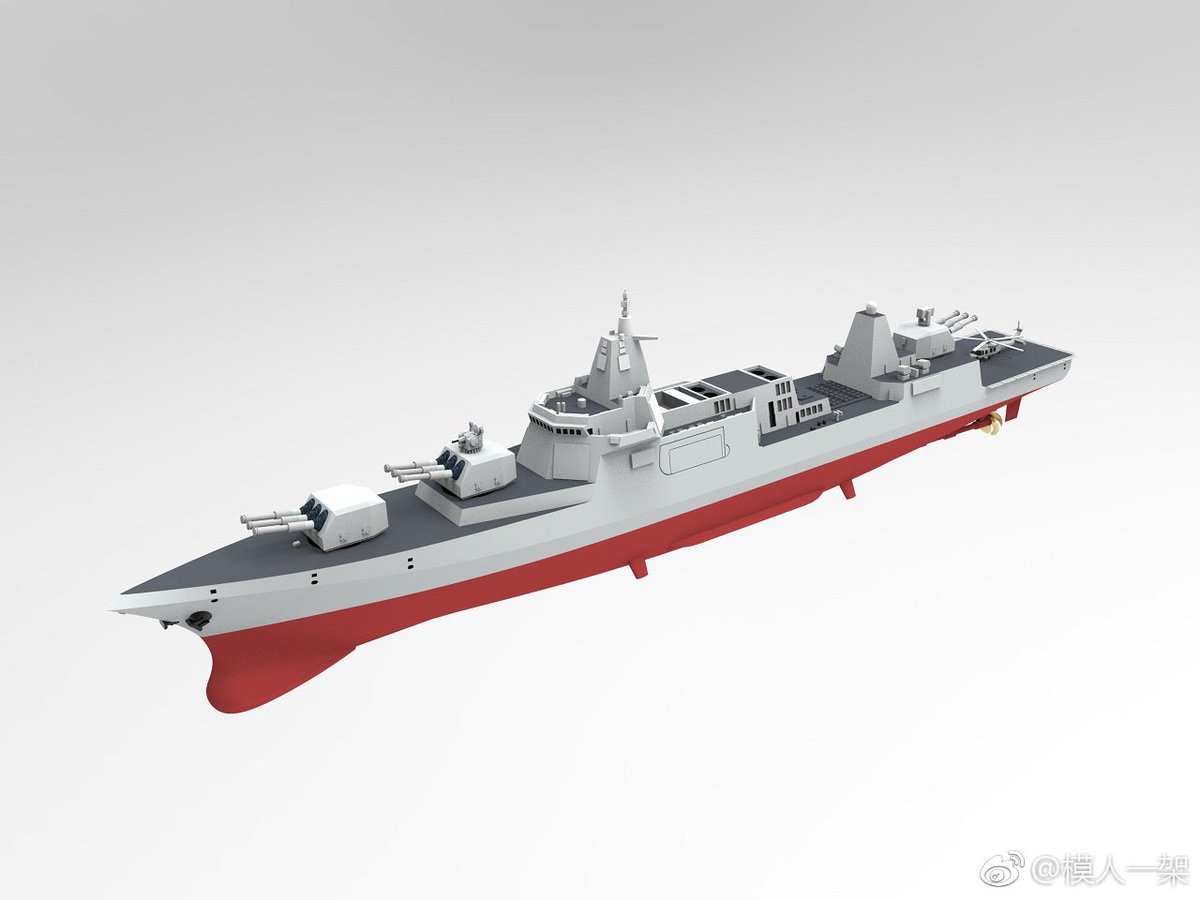 Whoever drew this up clearly has not the faintest idea what he/she/it is doing. A CIWS like the 1130 requires deck penetration, meaning it would have to penetrate the turret housing on the B gun. The CIWS also massively obstructs the frontal view from the bridge. The turret facing astern obliterates the hangar and provides no possibility for a helo to land unless it is turned 90 degrees sideways. Also, the railing on top of the bridge and just aft of the rear AESA panels are by no means going to be solid as is depicted as they would have to be metal to serve as proper railings, which will then block any radar emissions from entering or leaving the panels on top of the bridge and significantly obstruct the rear AESA panel.


Hendrik_2000 said:
There is no shortage of ignoramus Sometime I wonder if they live in parallel world. Like they say denial is a way to cope with undesirable reality like this guy here for years bad mouthing China military technology It is entertaining to hear what he has to say

China's Navy Is Flexing Its New Railgun
But it's possible US naval planners are preparing an even greater surprise for Beijing.

But it's possible that American naval planners are preparing an even greater surprise for Beijing when it comes to oceangoing firepower.

Of course, there's no guarantee the prototype gun will actually work. Railguns are enormous power-hogs. Indeed, it's possible the Chinese navy chose to install its prototype electromagnetic gun on a landing ship because such ships have large cargo holds and could easily accommodate the massive generators and cooling units that even a rudimentary railgun requires.

For now, the Pentagon is working on hypervelocity rounds in parallel with the railgun. If the US fleet decides to focus its efforts on the hypervelocity shells, it could quickly leapfrog past China’s in terms of overall at-sea firepower.
Click to expand...

What else were you expecting from bottom-feeding raggers like Axe and Mizokami? They're basically fanbois except on the polar opposite extreme. "It's possible" this and "there's no guarantee" that. So much delusional HOPE mixed together with angst and denial, sprinkled with a healthy dose of condescension. Pathetic.


taxiya said:
I am not sure about it being a pure railgun at this moment. It can still be a coil gun or hybrid of both. The partial rectangular shape of the barrel is not nessesarily the definition of it being railgun.

As Kurutoga's post 278 and 279 demonstrated, only the pure coil gun has a circular barrel all the way, the other type like the one in post 278 has rectangular barrel. Like I said in post 283, all of them are essentially coil gun, not rail gun.

I am afraid that unless some technician in the project eventually was allowed to tell something in a future CCTV interview or similar circumstance, we will never know what type this gun is.
Click to expand...

I have no idea how people are becoming SO sure that this barrel is rectangular. The jury is definitely still out on this IMO. The way the tarp drapes over the barrel so loosely prevents its cross-sectional shape from being identified with any degree of certainty at this juncture.
S

hkbc said:
So how is this any different than the current generation of CIWS? can any gun based point defence weapon engage multiple targets simultaneously? Guns come in varying calibres so it's logical that a EM Gun can also be made in different sizes, if you don't need to send something out to 100km but just 10 and the projectile is smaller then you'll need less power and can fire shots more frequently. Also with smaller 'barrels' a vessel can house more which can be distributed along the hull to allow multiple engagement so the technical issues then just becomes one of detection and available power.

All these absolute statements about whether a new concept can/can't do something should or shouldn't be used for something is just conservative thinking, like the Royal Navy admirals maintaining that wooden ships of the line as the way to stay in the early 19th century. When the first steam war ships appeared they still had sails because of the immaturity of the technology same with the coexistence of breech loading rifled guns and smooth bore cannons. Now there are no more sails and smooth bored naval guns are consigned to the museum.

If this EM gun and associated technologies works then it will herald the next stage of evolution in naval warfare and all the cosy certainties we assume to be inviolate truths will have to be re-thought.
Click to expand...

Well that's simple. For the same weight, power, and space (not to mention price) one can install 3 or 4 CIWS systems facing different directions. A type 730 or 1130 can fire at faster rates and engage multiple incoming threats at around 7km away. A EMG takes several seconds between each shot. How are the two even comparable? Once this EMG fires the first shot and assuming it destroys the missile, before it reloads second shot 10 seconds or so later, the other missiles would have already hit. Why is this not obvious? A CIWS would spray into first and following missiles and delivered thousands of rounds. Yes I get the rounds are different but please be realistic. EMG for CIWS is not realistic. At least not the one we're seeing. That is what we're discussing after all since it's the only one we have seen. If you're talking about miniature guns then I'm not interested. Lowering the power would also mean lowering muzzle velocity.
S

Well I think a large part in why the USNS Trenton didn't get the railkgun is that apart from the three Zumwalts, there won't be any suitable platforms for them until the Future Surface Combatant comes online in the mid 2030s, best case.

The PLAN on the other hand, has the Type 055A coming out in several years, more like.
O

Registered Member
Somewhat disappointing that it's not a coil gun after the tease. But who knows whether there's a coil gun being tested. This is just what they're happy to show. I'm almost certain there's a lot more behind the curtains and showing this is just a way to demonstrate strength in sensitive times (re. Korea and SCS even Doklam) without revealing everything. Very typical of Chinese leaders and culture. Beyond this "disappointment", we should still be happy with being first to test a railgun on a naval platform for sea-trials. Whether it can be effectively used as a CIWS, we'll find out eventually but that's actually not important. This is a first step and an important one in developing this technology further. The first jet powered fighter wasn't expected to be a all weather multirole air dominance fighter pushing all boundaries in every aspect either, but eventually the technologies behind it allowed these things.
A

Insignius said:
Well, this might also indicate that Prof. Ma and his team found out a way to make it work as he desired it: An all purpose gun, which can do anti-ship, anti-missile and anti-air.
Have some faith in him. He's basically China's Nikola Tesla at this point.
Click to expand...

I like the way you are comparing Prof Ma and Tesla ... but it's a bit too stretch unfortunately . I know very well who Tesla was
K

Based on BAE 32 MJ railgun data:

So this means with DDG-1000's total power of 78MW they can't really run two such rail guns at full power simultaneously? because that will consume 50MW leaving only 28MW for the rest of the ship including radar (sounds risky to me). I can only speculate this is one reason they prefer AGS, that railguns can't both run at full power.
Last edited: Feb 3, 2018
You must log in or register to reply here.