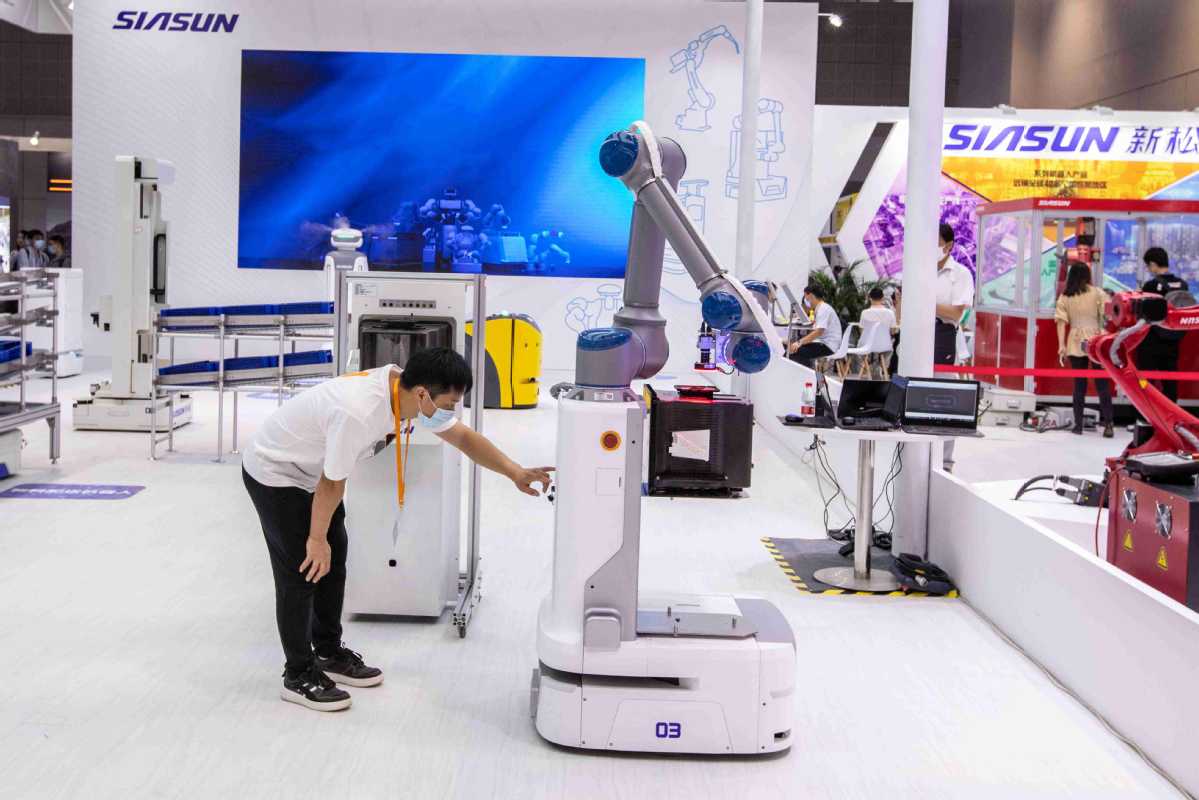 A visitor checks out an industrial robot at the booth of Siasun Robot & Automation Co during an industry expo in Shanghai in September 2020. [Photo provided to China Daily]

Robotics technology has grown rapidly in recent years, integrating emerging technologies such as artificial intelligence and 5G. It is also boosting new products and new applications that can promote global economic development and people's well-being.

"The robotics industry is an important symbol of a country's technological strength and level of high-end manufacturing," Jin Zhuanglong, minister of industry and information technology, told the 2022 World Robot Conference held in Beijing in August.

Combined with emerging technologies such as AI, 5G and new biological materials, the robotics industry is entering a key period of strategic opportunity for development and upgrading, Jin said.

Robots, an important tool to promote digital transformation and boost the digital economy, are accelerating their integration into production and people's daily lives, said Wang Hong, deputy director of the first equipment industry department of the Ministry of Industry and Information Technology, adding that the industry has shown great development potential.

Wang said China has formed what is basically a whole industry chain ranging from robot parts to robot applications. "In the first half－while the development of the robotics industry slowed due to COVID-19－it has gradually picked up the pace."

Despite challenges, such as a complicated and grim international environment and pressure from COVID-19 outbreaks, China's robotics industry has witnessed considerable growth, officials said.

The institute's report forecasts that China's robotics market will continue to boom this year. The market is expected to reach $17.4 billion in 2022, with a five-year average annual growth rate of 22 percent. The industrial robot market is set to be valued at $8.7 billion, and the service robot market at $6.5 billion.

The production of industrial robots, buoyed by a series of supportive policies and the rapid development of emerging technologies, is growing quickly and has played a key role in boosting the industry's advancement.

Many Chinese industrial robot companies are seeing a revival in demand for their products, as customers such as new energy industry players have stepped up their production amid better containment of the COVID-19 pandemic.

The new energy industry is at a breakout point for the growth of robot applications, said Zhang Lei, vice-president of Siasun Robot &Automation Co, one of China's largest robotics firms.

China has seen rising demand for industrial and mobile robots from new energy's rapid development, and Siasun has been participating in the process, Zhang said. "Our mobile robots have been widely used in manufacturing plants of major new energy enterprises."

The decline in the production of industrial robots in the first half was mainly due to disruption caused by the pandemic, which slowed all sectors of society, and led to shortages of components that affected delivery, Zhang said.

But with the gradual normalization of activities and better containment of the pandemic, Zhang said he expects to see a notable rebound in the production of industrial robots in the coming months.

Milton Guerry, former president of the International Federation of Robotics, said, "China is by far the biggest robot market in the world in terms of annual sales and operational stock." IFR is a professional, nonprofit organization based in Germany.

Guerry said IFR's robot density statistics, based on the number of industrial robots per 10,000 employees, are a useful indicator of China's dynamic development.

Chen Yu, a partner at Chinese venture capital firm Yunqi Partners, said he has seen high demand for robots in labor-intensive industries and industries that potentially put employees at high risk. "Few people like to work in those industries. Also, robots have big advantages over people in terms of standardization, safety and intelligence."

See link for rest of the article...

China is rapidly building cyber ranges that allow cybersecurity teams to test new tools, practice attack and defense, and evaluate the cybersecurity of a particular product or service. The presence of these facilities suggests a concerted effort on the part of the Chinese government, in partnership with industry and academia, to advance technological research and upskill its cybersecurity workforce—more evidence that China has entered near-peer status with the United States in the cyber domain.

Please, Log in or Register to view URLs content!
Huawei announced that it will build new data centers in Mexico and Chile in 2023. Huawei has now become the fourth largest cloud service provider in Latin America

Two years ago, I said this:

LawLeadsToPeace said:
I feel like regardless whether Trump gets re-elected or not, in the next few years, we are going to be seeing a massive exodus of Chinese scientists, engineers and other STEM experts from the US.
Click to expand...

It looks like the exodus has started. I won't be surprised if the US will next go after Chinese descent students and prevent them from even getting into the university.
G

LawLeadsToPeace said:
Two years ago, I said this:

It looks like the exodus has started. I won't be surprised if the US will next go after Chinese descent students and prevent them from even getting into the university.
Click to expand...

They are already doing it with "affirmative action" where those of Asian descent get their test scores downgraded.

gelgoog said:
They are already doing it with "affirmative action" where those of Asian descent get their test scores downgraded.
Click to expand...

I should have mentioned the STEM part. My bad. What I meant to say was that I expect the US to start purposely reducing the number of Asian, particularly Chinese descent students, entering STEM degree programs. While Affirmative Action does play a role in negatively impacting Asian students' chances of getting in regardless of their choice of major, it didn't impact the sheer number of Asian students who are STEM majors since STEM has requirements that the other groups just can't meet.
T

Registered Member
Was this posted already? The potential of autonomous drone technology can be chilling.