mr.bean said:
they got a serious problem when they can't even make light machine guns and have to buy that from abroad!
Click to expand...

Wait till you learn that the US can't even make handguns, with the US military having used an Italian pistol for the last generation and now transitioning to a Swiss one.

Lethe said:
Wait till you learn that the US can't even make handguns, with the US military having used an Italian pistol for the last generation and now transitioning to a Swiss one.
Click to expand...

all US Military weapons are US manufactured unless special circumstances like no US production or limited use for training or foreign arming .
The makers may be subsidiaries of foreign companies but they are made in US Factories.
That includes Both the Beretta USA M9 manufactured in Accokeek, Maryland, USA, Glock variants used by US Army Rangers, US SOCOM manufactured in Smyrna, Georgia, USA, M4A1 carbines and M249, and M240 from FN Manufacturing in Columbia South Carolina, USA, HK M320 in Ashburn Virginia, USA and I could keep going.
As to the M17 Modular Handgun system. SIG Sauer Inc. manufactures those in Exeter New Hampshire, USA half the design team for the original P320 pistol that became the M17 was the American side of SIG. The US DOD does however buy from a number of US owned makers as well. SO that generalisation is so fundamentally flawed as to be laughable.

For Nato Nations in fact few maintain widespread production. this leads to either subsidiary manufacture like the US when possible or direct foreign buys.
For India they have maintained some degree of internal production through the state owned Ordnance Factories Board, the problem appears to be that the Ordnance Factories Board has not always been able to maintain the quality control levels expected of military arms. This appears to have gotten so bad that they have lost contracts to foreign bidders. Furthermore the Indian forces are facing evolving needs. which there existing systems may not be able to meet. The most recent INASA rifle replacement requirements have moved up to a 7.62x51mm round similar to the US Army's recent push for a new battle rifle. 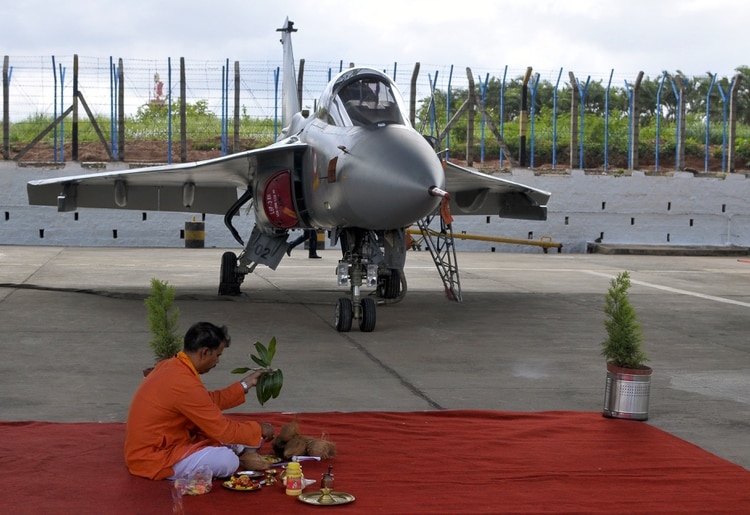 An Indian Hindu priest conducts a ritual in fromt of a newly commissioned Indian Air Force Tejas, a light combat aircraft. The service wants to place an order for 83 Mark 1 versions of the LCA, deprioritizing a Mark 2 order. (STR/AFP via Getty Images)
NEW DELHI ― The ruling National Democratic Alliance government’s Make in India policy could suffer a major blow as the Indian Air Force mulls the purchase of 105 Mark 2 versions of futuristic, homemade light-combat aircraft for $15 billion.

Service officials and analysts say the program faces uncertainty due to a lack of clarity and other immediate priorities.

As of now, the Air Force wants to place an order with state-owned Hindustan Aeronautics Limited, or HAL, for only 83 Mark 1 versions of the LCA for a cost of about $7.81 billion to meet the immediate fighters requirement.

“LCA Mark 2 is a far-fetched vision. The service wants improvement on existing LCA to address all issues of looms, improvement in performance, interchange ability, improved
Please, Log in or Register to view URLs content!
, improved avionics and missiles to be fitted on it,” a senior Indian Air Force official said.

Daljit Singh, a defense analyst and retired Air Force air marshal, said that the Mark 2 effort ”was proposed by the IAF to ensure that the LCA complies with majority of the air staff requirements. However, that would involve major design change of fuselage to accommodate more powerful engine.”

A senior executive of HAL said the production line of the LCA Mark 1A could be used for the Mark 2 version, but the executive refused to comment if there were plans to execute an LCA Mark 2 program.

The Air Force had initially sought 105 of the Mark 2 versions, which would come with fifth-generation fighter elements; improved propulsion system; a mounted, homemade Uttam active electronically scanned array radar; and the capability to carry 5,000 kilograms of armament.

A Ministry of Defense official said the LCA Mark 2 cannot be abandoned because it’s an important Indian-made project. The official added that efforts will be made to set the program on track for the Air Force.

On the future of the LCA Mark 2, Singh noted: “The project does not appear to have formal sanction, even though a lot of deliberations appear to have taken place.”
Click to expand...

The article I think is using a package buy pricing hence why it's in the billions.

INdia needs to learn how to build aircraft so they should order some LCAs...but you have to ask yourself why you would do that when the US is offering to build a plant to build ne build, modernized F-16s in India for less money per aircraft?

Like I said, India needs to keep giving its own internal makers some opportunity because ultimately India is going to need to build modern aircraft.

But in the mean time, they have hundreds of very old legacy soviet aircraft that simply have to be replaced and the F-16s deal is about as good as it gets for the money.
M

Jeff Head said:
INdia needs to learn how to build aircraft so they should order some LCAs...but you have to ask yourself why you would do that when the US is offering to build a plant to build ne build, modernized F-16s in India for less money per aircraft?

Like I said, India needs to keep giving its own internal makers some opportunity because ultimately India is going to need to build modern aircraft.

But in the mean time, they have hundreds of very old legacy soviet aircraft that simply have to be replaced and the F-16s deal is about as good as it gets for the money.
Click to expand...

Agreed. If its USD the package price divided by number of aircraft ordered make LCA more expensive than even the F-35. F-16 made in India seems the best option to me. But what do I know, India will probably complain tomorrow that Su-57 costs too much. Its a strange business for sure

TerraN_EmpirE said:
all US Military weapons are US manufactured unless special circumstances like no US production or limited use for training or foreign arming .
The makers may be subsidiaries of foreign companies but they are made in US Factories.
Click to expand...

And the Negev was going to be made in India as part of a joint venture between IWI and Punj Lloyd too.

Nobody is questioning the United States' ability to design and manufacture handguns. The point is that the post I was responding to was ignorant, and the fact that the mighty USA also buys guns designed by furriners for its military illustrates that.

There are enough issues with Indian procurement without imagining problems that don't exist. There is nothing noteworthy or objectionable about India considering foreign LMG designs for domestic manufacture.
Last edited: Sep 19, 2017

Beans post was foolish. few nations actually clean sheet their own designs every time as in most cases it's more cost effective to modify a off the shelf design.
however Lethe, your post could have been misinterpreted as a simple slam. I felt it needed a bit more detail to flesh it out and educate.

Well they equipped the helicopter with A-A missile but still lack Air to Ground missile. So what is the use of attack helicopter when the main weapon is missing?
Both HAL Rudra and Light Combat Helicopters are toothless: Indian Army Chief Rawat

Please, Log in or Register to view URLs content!
India’s chopper fleet to get teeth with air-to-air missiles

The Indian chopper fleet is set to get teeth, with the defence ministry initiating the final process of ordering new missiles for the Rudra. Developers are also planning a live firing of the air-to-air missile on the Light Combat Helicopter (LCH) by the year-end.

India presently has two indigenous attack helicopter programs – the Rudra (a weaponised version of the Advanced Light Helicopter) which joined service in 2013, and a LCH that is under development, and set to be in service with both the Army and Air Force. A total of 78 Rudras have been ordered, with 23 of them already in service.

The Rudra is currently armed with only a forward mounted machine gun and rockets, limiting its operational role in the battlefield. The helicopter will now be equipped with new anti-air missiles that will make it capable of taking down enemy choppers and UAVs.

The Indian Air Force—which is the lead agency for integrating these missiles on the Rudra—has called French missile manufacturer MBDA for final cost negotiations to supply the Mistral missile for the fleet.

“The contract negotiation committee will start in a few days. We had to do work on a few items before, which is now complete. We are fully compliant with the chopper,” Loic Piedevache, Country Head (India) of MBDA, said.

Little has been heard about the Rudra fleet in the past few years, but its presence at the Nalia airbase in Gujarat was revealed during Defence Minister Nirmala Sitharaman’s recent visit during which she inspected the helicopter.

The entire Rudra fleet, a majority of which will stay with the Army, will be armed with the Mistral missile. Talks are also on to procure an anti-tank missile for the fleet that will be fitted at a later stage.

The plan to develop a highly agile combat chopper under the LCH program is also set to get a boost with MBDA saying that the helicopter will be undertaking a live firing of the Mistral missile before the end of this year.

The LCH – 179 of which have been ordered – is currently under development and the integration of the Mistral missile will be a major milestone.

The Mistral missile will also be a major milestone for the Rudra. The LCH live firing will take place at the Chandipore testing range by year end and is expected to go smoothly as the Rudra and LCH share many systems including radars and the combat management system.

Besides the Rudra and the LCH, the Army and the Air Force are also getting the Apache attack choppers that are manufactured in the US. Described as the ‘most lethal in the world’,
Please, Log in or Register to view URLs content!
for the army in August, in addition to 22 attack choppers already ordered by the Indian Air Force.
You must log in or register to reply here.