MBDA is launching a new weapon family to complete its portfolios. Smart Gliders are non-propelled missiles that are planing and exist in two heavy and light variants.

The proliferation of means of denial of access has become one of the major concerns of modern air forces. While current armaments such as SCALP may partly address the need to counter these systems, MBDA has found it necessary to develop a new family of weapons to adapt to the threat.
The SmartGlider range was born with this in mind. These are non-propelled missiles, says the European manufacturer, with folding wings enabling them to hover over a distance of up to 100 km. Unlike the currently used GBU kit bombs, SmartGliders are fully integrated weapons with a dedicated load. The heavy version of the SmartGlider is 1200 kg and has a military load of 1 000 kg, the light version is 120 kg for two meters long. Both types of weaponry are designed to handle a wide range of targets. The SmartGlider "light" can strike objectives ranging from vehicles to small infrastructures. The SmartGlider "heavy" can strike important infrastructure. MBDA announces that it wants to exceed the performances of the bombs using Mk84 and BLU 109 bomb bodies.

MBDA has also developed a "Hexabomb Smart Launcher" (HSL) carrying system to carry six SmartGlider Light. The HSL is also a connected system which should allow to manage the strikes and to facilitate the work of the crew. A fighter such as Rafale could carry up to three HSLs, a Typhoon two and a Mirage 2000 one. Modern hunters could take 12 to 18 SmartGliders. Opening the way to saturating strikes. The range, allows to stay outside the air defense bubbles of the most widespread systems. The HSL must allow a reduced number of hunters to simultaneously handle a large number of targets, particularly during missions to suppress enemy air defenses.

MBDA is considering several modes of guidance for SmartGliders. The standard version will be equipped with an optronic homing head with three channels. Electromagnetic guidance is also envisaged to adapt to threats. The weapon will be "shoot and forget" allowing the crew of the fighter to quickly pass from one target to another. However, a data link could be used to modify the target of the weapon during its flight.

The SmartGlider family is the result of an initiative by MBDA but according to the manufacturer, several customers have expressed interest. The missile is aimed at both the European and export markets. The idea is to have a coherent and competitive portfolio. The SmartGlider will be placed between the cruise missiles such as the Scalp / Storm Shadow or the future British / French FC / ASW, which can handle targets several hundred kilometers away and lighter and short range weapons such as Brimstone Including dealing with moving targets.

MBDA announced today that it has reached a sufficient level of maturity to launch the SmartGlider development. It remains to find a customer or clients who could invest to acquire this new capacity.

According to a statement released on the Minister's website, the objective of this program, dubbed "CAMO", is to establish a partnership with Paris which will be based on identical combat vehicles. Under this partnership, Belgium and France will share common organization, training programs, and logistical support.

"With this investment, the government clearly chooses to modernize the existing motorized land forces in order to allow them to spearhead Belgian engagement in a context of collective security," said the Belgian Defense Minister Steven Vandeput.

The
Please, Log in or Register to view URLs content!
(Véhicule Blindé MutiRôle - Multirole armoured vehicle) is a 6x6 armoured vehicle personnel carrier (APC) that will mainly replace the old VAB 4x4 APC in service with the French army since 40 years. The Griffon has been designed to have a modular architecture and it will be delivered in five configuration including personnel carrier, command post, artillery observation and ambulance.

The Griffon will have a maximum gross vehicle weight (GVW) of 24.5 tones and carrying up to 10 personnel. The main armament of the Griffon will include a remotely operated weapon station armed with a 12.7mm or 7.62mm machine gun or one 40mm automatic grenade launcher.

The
Please, Log in or Register to view URLs content!
is 6x6 armoured vehicle fitted a two-man turret 40 CTAS armed with one 40mm CTC cannon with Ammunition Handling System (AHS). The 40mm cannon will have a maximum range of 1,500 m. The 40 CTC can incorporate multiple natures of ammunition within the same ammunition handling system which gives the vehicle the capability to quickly engage threats across the modern battlefield spectrum including those within urban environments.

Each side of the turret will be fitted with MMP (Missile Moyenne Portée - Medium Range Missile) missile designed by the French Company MBDA. The MMP missile is a fire-and-forget missile with lock-on before launch and automatic self-guidance and which has a maximum range of 4,000m. Four smoke grenade dischargers are mounted at the front each side of the turret.

this is very interesting (from the Paris Air Show through
Please, Log in or Register to view URLs content!
): an Italian Typhoon with the payload including a variant of the Marte AShM, the Meteor BVRAAM etc. 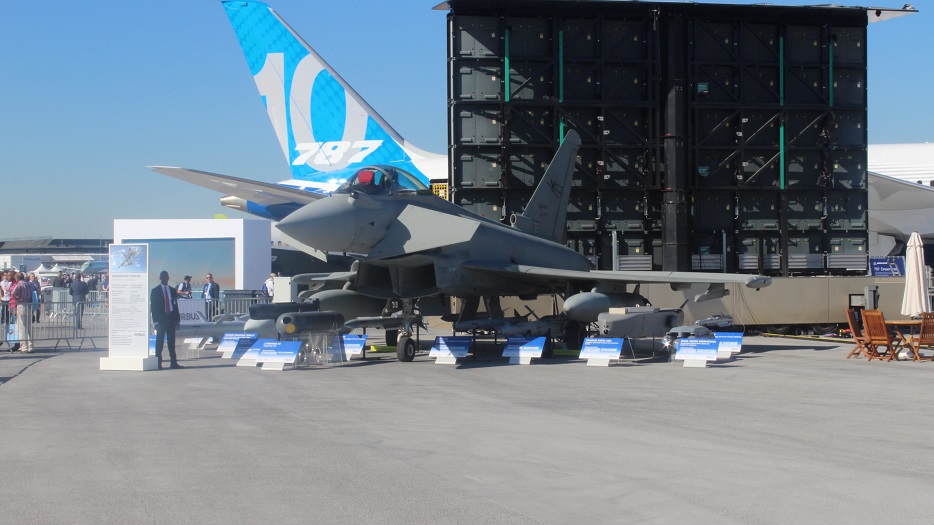 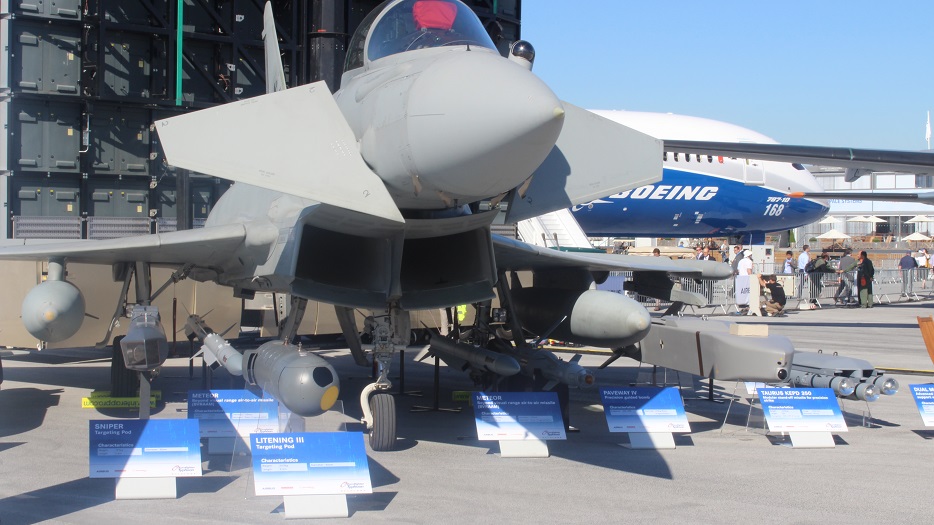 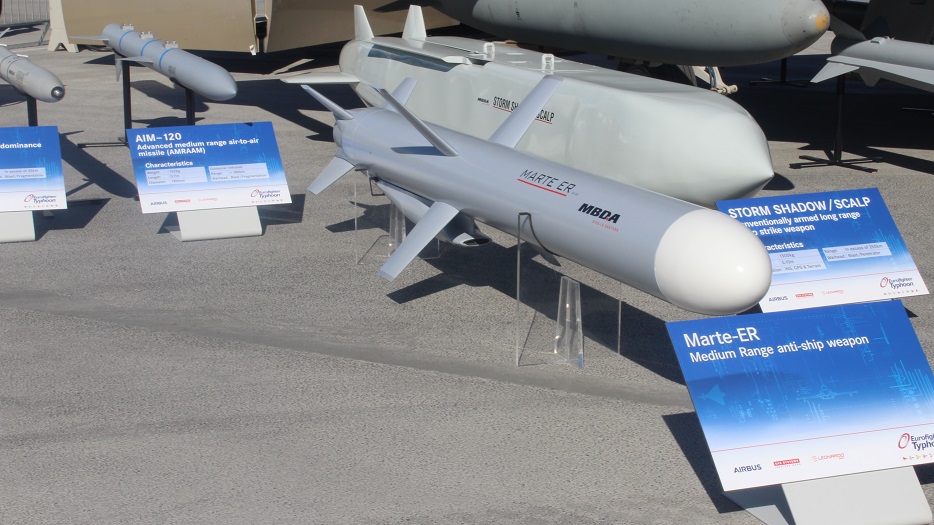 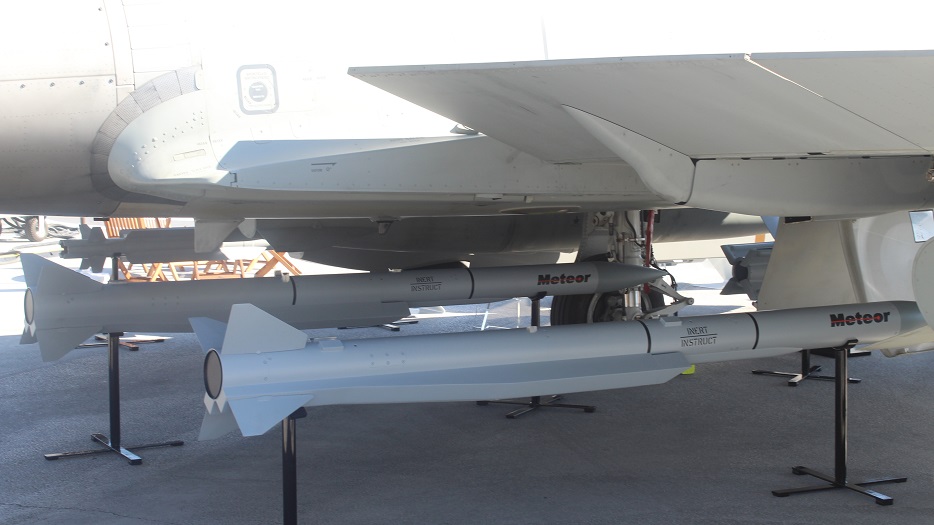 Airbus Helicopters has delivered the 15th and final H145M multirole helicopter to the German Armed Forces (Bundeswehr). The helicopters, stationed in Laupheim, are operated by the Bundeswehr special forces, the rotorcraft manufacturer said today.
As the launch customer, the Bundeswehr ordered 15 of these high-performance helicopters in 2013 as part of the Light Utility Helicopter (LUH) Special Operations Forces (SOF) project and received the first aircraft at the end of 2015. With this final delivery, Airbus Helicopters has completed the entire programme within the specified time schedule and budget.

“The LUH SOF project is an excellent example of what a constructive cooperation between the Bundeswehr, the authorities and industry can achieve,” said Wolfgang Schoder, CEO of Airbus Helicopters in Germany. “I would like to thank all of our partners for the efficient and successful cooperation, and will be delighted to push ahead in this spirit with the implementation of further programmes. I wish the Bundeswehr special forces all the best when using their new helicopters.”

The H145M is the military version of the tried-and-tested, light twin-engine H145 civil helicopter that was first delivered in 2014. The entire H145 fleet has now clocked up more than 50,000 flight hours. With a maximum take-off weight of 3.7 tonnes, the agile H145M can be used for a wide range of tasks, including transport, supply, surveillance, air rescue, armed reconnaissance and medical evacuation. The Bundeswehr’s H145M LUH SOF helicopters are equipped with a fast roping system to transport special forces, a high-performance camera system for reconnaissance, as well as equipment for fire support during deployment, enabling special forces to use the helicopters in a wide variety of new fields. Furthermore, the helicopter’s ballistic protection and electronic countermeasures system offers a high level of security during deployment.

The helicopters were developed for day and night use and capable of operating in adverse conditions. Powered by two Turbomeca Arriel 2E engines, the H145M is equipped with full authority digital engine control (FADEC). In addition, the helicopter is equipped with the Helionix digital avionics suite which, alongside innovative flight data management, includes a high-performance 4-axis autopilot, which considerably reduces pilot workload during missions. Its particularly low acoustic footprint makes the H145M the quietest helicopter in its class.

In 2015, Airbus Helicopters also concluded a comprehensive cooperative service contract with the Bundeswehr, providing support to the customer until at least 2021. Airbus Helicopters' responsibilities include managing and implementing maintenance and repair work, supplying spare parts and ensuring airworthiness. The fact that more than 3,900 flight hours have already been logged speaks for the choice of support concept, the good working relationship and the reliability of the helicopters.

“It is evident that this kind of performance-related support contributes to the system’s high level of availability for troops,” explained Wolfgang Schoder. “This close cooperation between industry and operator has proven its worth in the civil sector and is also becoming increasingly important for military customers. There is still more potential to be realised with the Bundeswehr in this area.”

The H145 helicopter family has proven its value for military customers time and again. For instance, the US Armed Forces ordered a total of 427 helicopters of the related model UH-72A Lakota for a variety of different applications. All of these helicopters were delivered on time and on budget. The UH-72A achieves operational availability rates of over 94% on average. The Republic of Serbia ordered nine H145M helicopters, Thailand five

Germany approved the procurement of five additional
Please, Log in or Register to view URLs content!
by 2023. This new procurement, worth about 1 Billion Euros is to answer new NATO requirements: NATO expects the German Navy (Marine) to provide a total of four corvettes at the highest readiness level for use in littoral operations from 2018. With the current five K130 class corvettes, the Marine can only provide two vessels.

ANALYSIS: Why Europe's combat aircraft market is worth fighting for

With the Dassault Rafale, Eurofighter Typhoon and Saab Gripen – plus Lockheed Martin's incoming F-35 – dominating the fleets of many European nations, it would be easy to overlook the multiple other sales opportunities the continent holds for combat aircraft manufacturers.