“China Shipbuilding Industry Corp has never announced the angle, but the blueprint for the Liaoning shows that the angle on its ramp is 14 degrees,” Beijing-based naval expert Li Jie said.
“But based on the thrust of the J-15 fighter jet, many experts believed the ramp angle on the Shandong would have to be reduced a little,” he said.
Hong Kong-based military commentator Liang Guoliang said the ski-jump angle on the Liaoning – a Soviet-designed Kuznetsov-class carrier China bought from Ukraine in 1998 – was designed to accommodate Russian Su-33 Flanker fighters.
“Four options for the ski-jump ramp angle – eight, 12, 14 and 16 degrees – were tested,” Liang said. “More powerful aircraft need a lower angle, and it’s a fact that China’s J-15 is more powerful than the Su-33.”
Click to expand...

Please, Log in or Register to view URLs content!
The Chinese r pragmatic & don't do anything more complicated than necessary, so it's a safe bet the rump on the CV-17 has lower angle.
V

Intrepid said:
We have no evicence, that the ski ramp angles of Kuznetsov, Liaoning and Shandong are not the same. Just constant repetitions due to an assertion. We know the details of different ship lengths, which are definitely wrong.
Click to expand...

The information come from the documentary aired on cctv that i have linked. The documentary also included an interview with one of the ship designer for Shandong so i would consider it as credible source.
V

Registered Member
Having done some more research, there appears to be conflicting information. I would appreciate if someone could link to some authoritative information on the Admiral Kuznetsov and ex-Varyag design.

On Liaoning, all sources seems to agree on 14.3 degrees or 14 degrees as commonly given figure.

What is know is that Shandong is not a straight copy of Liaoning and additional design improvement have been made. See
Please, Log in or Register to view URLs content!
for an interview with one of the ship designer talking about a new propeller design for Shandong and additional simulation and optimisation on the ship shape. There is very much possibility that flight deck angle was changed.

Sidenote: it is worth watching the videos in
Please, Log in or Register to view URLs content!
on some close up shots of Shandon and some internal shots.

If Shandong has a ramp angle of 12° instead of 14°, the parking space on the forecastle deck would be reduced due to the longer rounding.

A satellite image. Lots of tire marks as well as markings before the blast shields, among others. 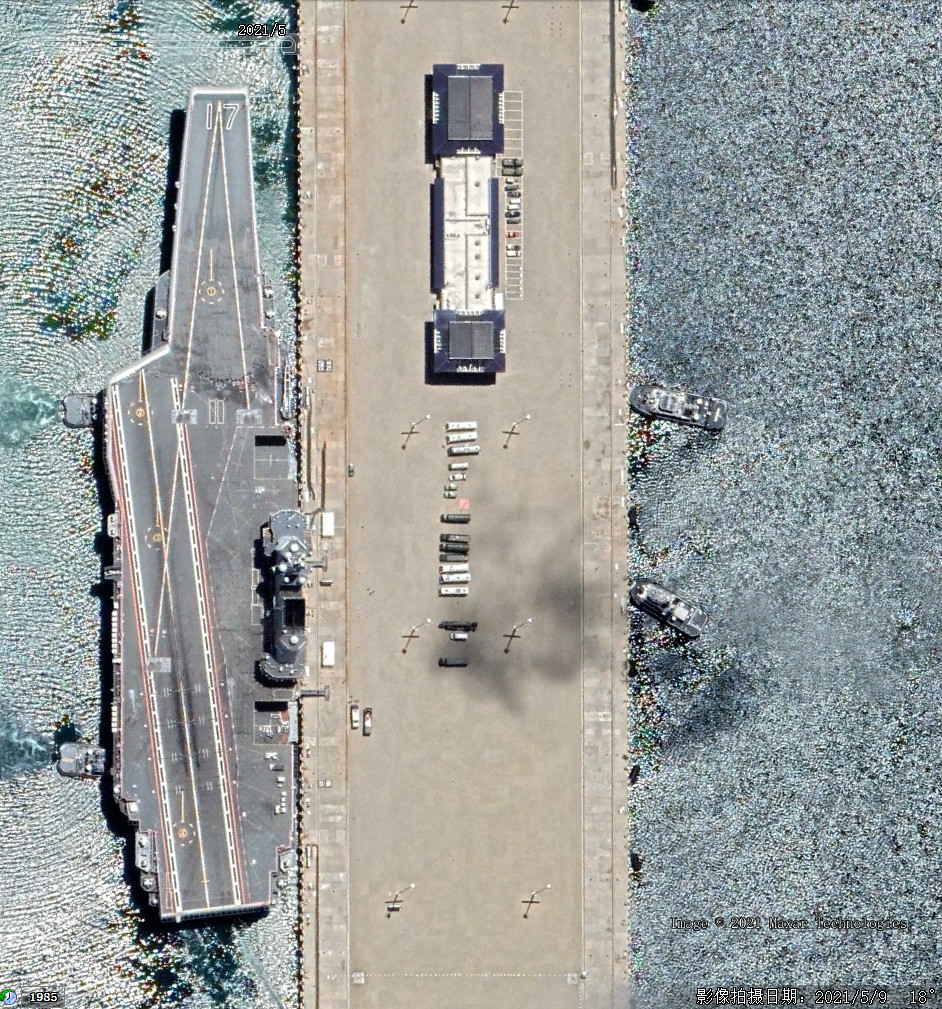 The deck of an aircraft carrier is a noisy, greasy, and dirty environment ... and it needs to be cleaned of oil and debris from time to time. Especially where the aircraft are parked, refueled and ammunitioned.

Registered Member
Everything about ships is way dirtier than you'd expect. Hence the constant cleaning.

But the Chinese spend a lot of time keeping their ships clean. Not all navies do that.

Intrepid said:
But the Chinese spend a lot of time keeping their ships clean. Not all navies do that.
Click to expand...

It definitely looked that way when I was able to see them in Hawaii years back. Pretty sure it's standard for all the major navies.

Intrepid said:
But the Chinese spend a lot of time keeping their ships clean. Not all navies do that.
Click to expand...

you have not seen enough naval warships

even the older Duke Class are shinning like polished shoes

JMSDF also has this

being clean and tip top is a sign of professionalism and culture
You must log in or register to reply here.