by78 said:
@tupolevtu144, here's an image of Liaoning taken yesterday by the Japanese Maritime Self-defense Force. I'm amazed at how fast Liaoning can sail on just one boiler ...
Click to expand...

They shouldn't warn each other, they should form a formation.
D 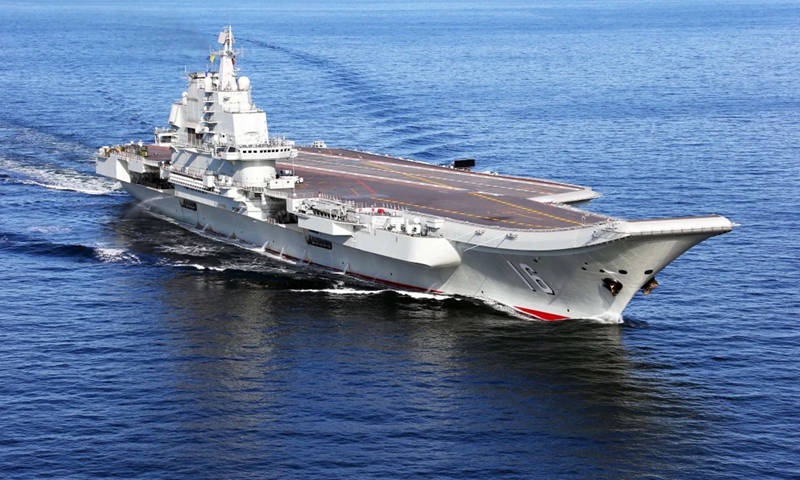 Liaoning aircraft carrier File Photo: Xinhua
Chinese warships warned away a US warship stalking the Liaoning aircraft carrier task group when the Chinese carrier was holding exercises near the island of Taiwan and in the South China Sea recently. The provocative move by the US could have resulted in misjudgment and accidents, Chinese experts said on Thursday.

When the group of the Chinese People's Liberation Army (PLA) Navy was holding normal exercises, the USS Mustin destroyer repeatedly conducted close-range reconnaissance on the Chinese vessel group, which severely disrupted the Chinese ships' training activities and seriously threatened the navigation and safety of vessels from both sides, making the US move very vile in nature, said Senior Colonel Wu Qian, a spokesperson of China's Ministry of National Defense, at a regular press conference on Thursday.

The Chinese warships warned the US vessel away, and the Chinese Defense Ministry has lodged stern representations with the US, Wu said.

Wu's statement comes after a US Navy sailor
Please, Log in or Register to view URLs content!
of the Liaoning when it was conducting J-15 fighter jet takeoff and landing exercises in the South China Sea in mid-April.

Close-range provocations like what the US warship did could result in misjudgments and accidents, Song Zhongping, a Chinese military affairs expert and TV commentator, told the Global Times on Thursday.

It was the US that violated related rules and regulations both countries agreed on, and if any accident was to take place, the US would be liable, Song said.

Since the new US administration assumed office, US warship activities close to Chinese waters have increased by more than 20 percent compared with the same period last year, and more than 40 percent for reconnaissance aircraft, Wu revealed.

The US moves are pushing for regional militarization and threaten regional peace and stability, and China is firmly against this, Wu said, noting that China has urged the US to strictly restrain its frontline troops and abide by rules including the Rules of Behavior for the Safety of Air and Maritime Encounters between the two countries and the Convention on the International Regulations for Preventing Collisions at Sea, so as to avoid similar dangerous incidents from happening again, Wu said.

The Liaoning carrier group recently conducted regular exercises near the island of Taiwan and in the South China Sea with the aim of examining the performance of its equipment and boost the troops' capability to carry out missions, Wu said.