Quickie said:
The article is rubbish as an example this quote:

The writer should research the Chinese semiconductor industry thread to see how he got it completely wrong on the "computer chips".
Click to expand...

Registered Member
China has been creating its own "computer" chips for nearly two decades. By creating, I mean the design and engineering. They were then fabricated by contractors in Taiwan and sometimes Japan and South Korea. During that period China was capable of manufacturing some chips but not of the leading generation and certainly not all types of chips. The situation today is much brighter where China is arguably one of the only countries on earth that can be considered to supply every step of the way in designing and fabricating chips. Design of leading chips has always been a strong suit of China's and for nearly a decade already. Fabrication remains at least a step behind but there are only a handful of hurdles left there - EUV lithography being the only realistic hurdle worth mentioning. The rest are all but too easy to overcome with some time. There is hardly a guarantee China could conquer EUV tech within a reasonable amount of time e.g. 3 to 5 years.

There was talk of China being closer to being shoulder to shoulder with leading fab 10 years ago but much more equipment then was foreign dependent. Now none of it is thanks to ASML bans ordered by the US. While it would be nice to be able to already fab 7nm and onwards, it requires China to overcome a few more hurdles. The entire supply chain is now Chinese albeit it isn't able to do 7nm and 14nm isn't yet commercialised as far as I understand.

So the author is downright incorrect. China isn't just totally able to create its own computer chips, it has been able to do that for twenty years and today is one of four nations (Korea, Japan, USA, and China) that holds everything to do with semiconductors under one roof. I didn't count Taiwan there because it never was a sovereign nation and PRC will not allow it to separate and become one.

This is a clear example of yet another idiot journalist OR someone who is taking instructions on what to write although judging by the content and the way it's written, the overall message is directed from handlers but the material is based on total nonsense. China in the past struggling with extremely high performance, world leading, exclusive turbofans - yes. Most material and design issues have been overcome around 2010 to 2020 period. This is evidenced by Chinese engine tech being sought after by German and UK companies, China building its own fighter engines and even new designs (not licensed productions) like WS-10 series and so on. CJ-1000, WS-20, mastering all superalloys materials, assembly and fabrication, testing standards & procedures, design, equipment & tooling, it's all done. Just because they are being tested and being proven doesn't mean China can't build engines. It's not a binary in fact China is 80% there if 100% is US/UK aeroengine industry level. When it comes to chips, China is 90% there in an even less crowded field.

These spaces are literally the two most exclusive spaces where only one or two nations truly hold absolute reign (US/UK in engines and US + east Asia in chips) the others have one or two niche areas but are absolute zeros in every other area. I would say China's clear and significant progress in these two fields over the last twenty years is commensurate with the dedication they've put towards it but obviously still a ways to go before being totally level with the lead and completely self dependent in every aspect. With chips, the US has really helped motivate the appropriate forces.
Last edited: Jun 7, 2021
O

In which aspect? Certainly not when they talked about chips. They don't sound like they know much about semiconductors or how decently capable China has pretty much always been in this field and how it's one generation or so behind on silicon based semiconductors. Mind you this is behind a combined force of select specialised niche players all combined and counted as one entity. So no, the writer could literally not have been further away from the truth here.

For one thing, China is well ahead of the UK in semiconductor design, research, and even fabrication. UK has some architecture and software/equipment niches but overall, it does not cover the semiconductor field anywhere near as comprehensively as China does. If we're talking non-silicon based material or quantum computing and chips, China's much further ahead.

Does that sound like a nation that "has not been able to create its own computer chips"?
Last edited: Jun 7, 2021

IMO, the article is not well researched in the subject and are just repeating unverified information from an unverified source, an example would be this:

One of its earliest versions of a domestically designed engine, the WS-10A, regularly
Please, Log in or Register to view URLs content!
after just 30 hours of use.
Click to expand...

Seriously, if the WS-10A was that bad, would it even pass the prototype stage?, never mind the further development of the WS-10A into many of its variants, and its core engine design into what is the WS-20.
W

I would argue the US and China have the most complete and comprehensive semiconductor industry. This may be shocking news to most lay-people.

Semiconductor industry is just about the most globalized and specialized industry in the world, with each country/region out of a few (US/Japan/Korea/Taiwan/EU/China) specializing in some areas. Most companies in this industry focus on certain niche.

In that sense, the most comprehensive and complete within one country are pretty meaningless. For China, it has players in each semiconductor sub-sector, but very few of them are top global players in terms of technology or market share in their respective niche.

But it means everything when you're sanctioned or embargoed, and when you start to build your own ecosystem. This is when having the world's largest market and a comprehensive industrial base matter a great deal.

But why are we talking about semiconductor in the engine thread? LOL.

Quickie said:
IMO, the article is not well researched in the subject and are just repeating unverified information from an unverified source, an example would be this:

Seriously, if the WS-10A was that bad, would it even pass the prototype stage?, never mind the further development of the WS-10A into many of its variants, and its core engine design into what is the WS-20.
Click to expand...

They fixed the problem around the 2012-2014 timeframe but at the expense of lowering the thrust on WS-10A. Otherwise they wouldn't have felt confident intercepting a P-8 with a WS-10 J-11B in 2014.

A scramjet concept test in 2020. The caption says "solid-state(?) scramjet free-jet test." Is my translation right? 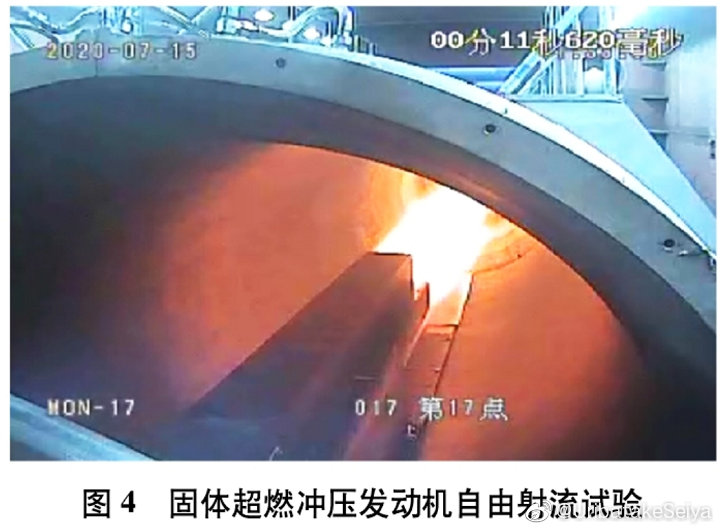 I loathe to post this, as I have no way of verifying its authenticity, but it's interesting nonetheless. Take it with a grain of salt.

This is allegedly the placard for a WS-20 engine display model. It states that in the future, the engine can be used on a certain large passenger plane, a new medium twin-engine transport, and a new generation of long-range anti-submarine patrol aircraft. Thrust rating: 13000 - 16000kgf. 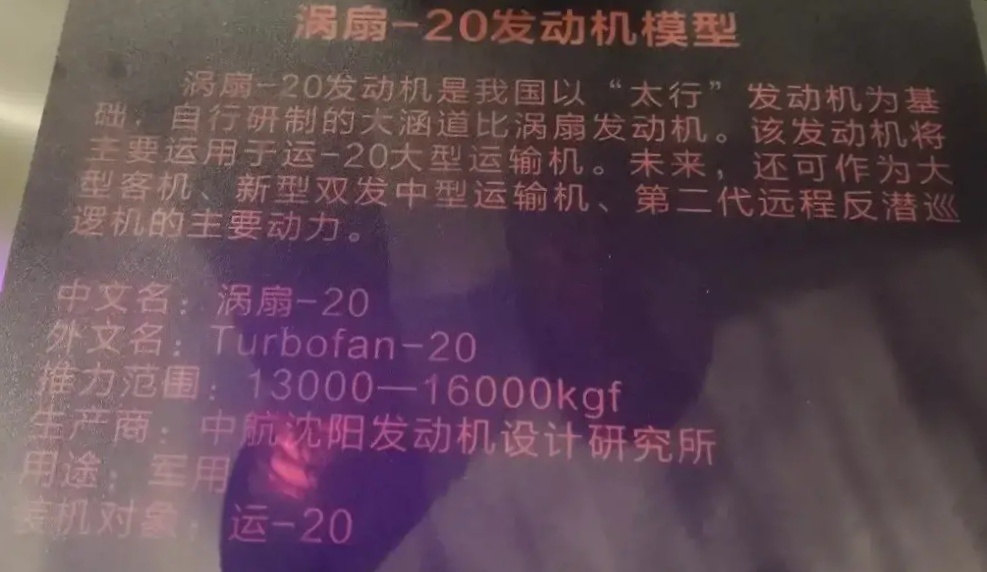 by78 said:
I loathe to post this, as I have no way of verifying its authenticity, but it's interesting nonetheless. Take it with a grain of salt.

This is allegedly the placard for a WS-20 engine display model. It states that in the future, the engine can be used on a certain large passenger plane, a new medium twin-engine transport, and a new generation of long-range anti-submarine patrol aircraft. Thrust rating: 13000 - 16000kgf.

With the same caveat and cautiousness, I give you the following comparison.

weig2000 said:
With the same caveat and cautiousness, I give you the following comparison.

Also, isn't the BPR of WS-20 as a Military Turbofan expected to be 5 to 6 range? I don't think the numbers for WS-20 makes good sense.
You must log in or register to reply here.