Today, China’s renewed economic and market stability contrasts with the fear of a hard landing that gripped markets less than a year ago. At the start of 2016, China’s economy was faltering, the yuan was besieged by speculators and its stock market was in the midst of an unprecedented rout. The turmoil roiled markets across the world, wiping out more than $6 trillion in global equity value in the first two months of 2016.
However, the International Monetary Fund’s latest forecasts predict that China’s economy will expand 6.6 percent this year and 6.2 percent in 2017, unchanged from earlier projections. By contrast, the IMF says, “taken as a whole, the world economy is moving sideways.” The fund lowered its 2016 forecast for advanced economies to 1.6 percent.

Compared with the uncertainties over Britain’s vote to leave the European Union, and the trade policies of the next U.S. president amid negative interest rates in Europe and Japan, China can be credited with having a master plan for its economic development.

The Chinese government is pushing forward the transition to a domestic consumption and services-led economy, as the old growth engines of manufacturing and exports lose steam. Consumer spending is filling some gaps, along with the rise of e-commerce and internet giants such as Alibaba Group Holding Ltd. and Tencent Holdings Ltd.
Chinese shoppers are becoming increasingly affluent and sophisticated. Instant noodles were once regarded as comfort food for office workers, and over the past three decades these bowls were also ubiquitous at construction sites, railway stations and factories, coupled with the country’s economic takeoff. Now, they are giving way to freshly prepared food, powered by the ascent of China’s middle class. Sales of instant noodles produced by Tingyi Cayman Islands Holding Corp., manufacturer of the top brand, Master Kong, have declined for the last two years.

In another sign of growing sophistication, Chinese consumers are increasingly seeking healthier and tastier meal options along with convenience, thanks to the rise of mobile technologies and e-commerce. Fresh food is delivered at the door within half an hour after a few taps of mobile apps. The country’s three biggest internet companies, Alibaba, Tencent and Baidu, are pouring money into food delivery platforms serving the “online-to-offline” neighborhood services market, which is expected to reach 7.28 trillion yuan ($1.1 trillion) by 2017.

E-commerce, one of the most revolutionary changes in the Chinese consumer economy, accounts for 11 percent of the country’s retail sales, according to Nielsen Holdings Plc., compared with 8 percent in the U.S. More importantly, “it has taken China only five years to rise from about 2 percent of e-commerce penetration to around 14 percent—half the time that it took the U.S. to achieve that level of growth,” says Geoffrey Wong, Head of Emerging Markets & Asia Pacific Equities, UBS Asset Management. 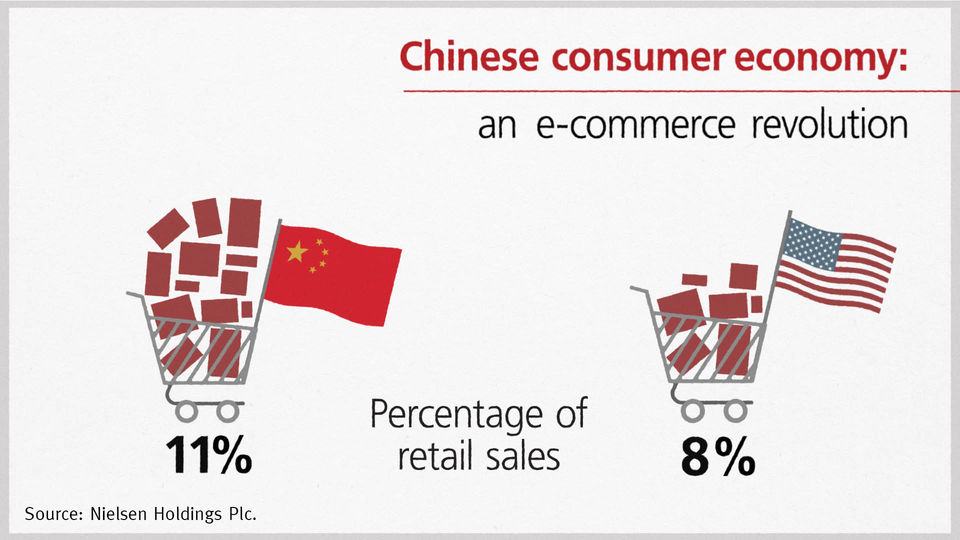 China just open a new east-west high speed rail from Hangzhou to Kunming a 2252 km track across central China a poorer region than the coast .By 2020 China will connect 80% of major city by high speed railway. They plan for 50000 km high speed track by then

I believe there will 4 E-W line 2 are built Urumqi line and now Kunming line. Hopefully it wil spur the development of tourism to improve the economy of landlocked province and tie in the future Southern route to SEA
China's east-west high-speed railway up and running
Members of China's Miao ethnic group at Guiyang North Station welcoming a train bound for Kunming South Station yesterday. With the launch of the Shanghai-Kunming line, the high-speed rail grid has taken shape, connecting almost all provincial-level regions.PHOTO: XINHUA
PUBLISHED
DEC 29, 2016, 5:00 AM SGT

KUNMING • China launched one of the world's longest high-speed railways yesterday, linking the prosperous eastern coast with the less-developed south-west.

It is the longest east-west high- speed railway in China. The north-south Beijing-Guangzhou line is even longer at 2,298km. It started operations in 2012.

The launch of the Shanghai-Kunming line means the high-speed rail grid has taken shape, connecting almost all provincial-level regions.

Another high-speed line, linking Kunming and Nanning, capital of Guangxi Zhuang Autonomous Region in the south-west, was also launched yesterday.

Yunnan is home to 25 indigenous ethnic minorities. Attendants on the Shanghai-Kunming line are trained to be multilingual. The line is said by some to be the most beautiful high-speed route in China as many of the stops are tourist sites. Yunnan is a big draw for tourists as the region boasts snow-capped mountains, canyons, tropical forests and ethnic villages.

Annual growth of the city's tourist arrivals will double after the high-speed train line is launched, said the Kunming Municipal Tourism Development Commission.

But it is not all about scenery. The line also links Yunnan with a vibrant economic powerhouse - the Shanghai-centred Yangtze River Delta economic zone.

Local governments and business people expect the connection to help in the development of the land-locked provinces of Yunnan and Guizhou. Travelling time between the two provincial capitals is cut from seven hours to two.

Yunnan's border trade with Thailand, Myanmar and Vietnam is also expected to get a lift. "It will be faster for us to travel on high-speed trains," said a Laotian businessman. "I am so excited."

Hendrik_2000 said:
I believe there will 4 E-W line 2 are built Urumqi line and now Kunming line. Hopefully it wil spur the development of tourism to improve the economy of landlocked province and tie in the future Southern route to SEA
China's east-west high-speed railway up and running
Click to expand...

Now, I am really starting to envy the people in China.

Now, I am really starting to envy the people in China.
Click to expand...

Well you can take virtual ride of Kunming-Shanghai HSR and go through unbelievable number of tunnel . It must be one of hardest line to built

taxiya said:
Why make more enemies? Your proposal sounds like G.W. Bush's infamous words "you are either with me or against me". That is bullying, something almost everybody in the world distain, and the outcome today has proven G.W. Bush destroyed American's world standing by doing that. Why do you want China to do just that?
No offense meant, but I suggest you to study the concept and history of "统一战线/United Front".
Click to expand...

Why? Because they already view China as enemy. Common sense , right.
China doesn't really need South Korea, Japan monopolize in their fields in China. Only Hanjins say they are necessary.
You must log in or register to reply here.