Kim Jong Un Complains of US 'Hegemonism' as Summit Nears...

Kim told Sergey Lavrov that he hopes to boost cooperation with Russia, which has remained largely on the sidelines in recent months as Kim has made a major diplomatic outreach to the United States as well as to South Korea and China.

"As we move to adjust to the political situation in the face of U.S. hegemonism, I am willing to exchange detailed and in-depth opinions with your leadership and hope to do so moving forward," Kim told Lavrov.

U.S. Secretary of State Mike Pompeo has given interviews to three foreign media outlets over the Korean Peninsula issue, saying that China "certainly" has a role to play over the issue.

CHINA "CERTAINLY" HAS ROLE TO PLAY

According to the transcripts provided by the State Department on Friday, Pompeo said in the interviews that "China will certainly have a part" on relative issues, including the ultimate ending of the state of war on the Korean Peninsula.

"I'm very confident that China will play a role. Indeed, they have already to date," said Pompeo.

China has already been part of it, as Chinese President Xi Jinping and Kim Jong Un, top leader of the Democratic People's Republic of Korea (DPRK), have met for discussions, said Pompeo.

Pompeo will head to China on June 14 after the meeting between U.S. President Donald Trump and Kim. This will be Pompeo's first trip to China as U.S. secretary of state.

"I'm looking forward to meeting with China's senior leaders to talk about exactly the relationship between our two countries," he said.

"They are two big economies, two important places in the world, and we have lots of connectivity, and there are places we have challenges," the top U.S. diplomat noted.

"There are many places where China and the United States will do great things together. There are other places where the two countries are competing," he said.

"Our job as diplomats -- mine as the Secretary of State and my Chinese counterparts -- is to work so that it's not a zero-sum game between our two countries, where we can succeed together," he added.

Pompeo said that he will also share with China how the Trump-Kim meetings go.

Pompeo said in the interviews that the exact timing and modalities of the denuclearization of the peninsula have not been agreed to yet, but the U.S. side has expected "a fundamental shift" in the relationship with the DPRK.

"Our objective for the summit is very clear: We want to achieve a fundamentally different strategic relationship between our two countries," he said.

"President Trump has been very clear all along that he is prepared to provide North Korea (the DPRK) with the security assurances, the warm political relationships that they want and are demanding in exchange for actions by North Korea, the denuclearization of the peninsula."

"We're hoping to make just as much progress on that as we can during the summit," he said. "And then along with our partners -- China, Japan, South Korea -- we can all move forward together."

As for the timeline of the denuclearization, Pompeo only said that Trump and Kim will discuss it during the meeting.

"Chairman Kim told me directly that he was prepared to sit with President Trump and talk about how that denuclearization would take place. The two of them will have a chance to have an extensive conversation surrounding that," he said.

"When you think about complete denuclearization, it would certainly be all of their sites, not just those that have been declared," he said.

"I would hope that there would be a statement that they would put out that each could agree to. But we'll have to see," he added. "The ultimate resolution of the problem will take lots of willing partners."

Pompeo noted that Trump and Kim will "begin to flesh out what both the security assurances will look like, what we can do together politically to provide better relations between our two countries, and then talk about denuclearization."

He also said that foreign economic assistance and security assurances to Pyongyang "are incredibly linked."

"For North Korea to have the security assurances it needs, it needs to know that it has an economic -- economically viable path forward ... it's difficult to separate them out," he said, adding that he imagines many nations, besides the DPRK's neighbors, will want to participate in its economic development "if we are successful in Singapore."

However, the foreign assistance, "much like the economic opening that will take place, it will only take place at such time as we have completed the denuclearization," he said.

He also reiterated that U.S. sanctions on the DPRK will not be lifted "until such time as the denuclearization itself has been completed."

"The economic relief, the sanctions relief ... can't take place until we see real action, real change, on the part of North Korea," he said.
Click to expand...

Kim flew out to Singapore on a Chinese supplied and crewed 747.Now if things were to go pear shaped because of Kim, would the plane fly back to Korea or to China?

China highly appreciates the political decisions made by the two leaders of DPRK and US. It welcomes and supports the outcome of
Please, Log in or Register to view URLs content!
, Chinese Foreign Ministry says in a statement 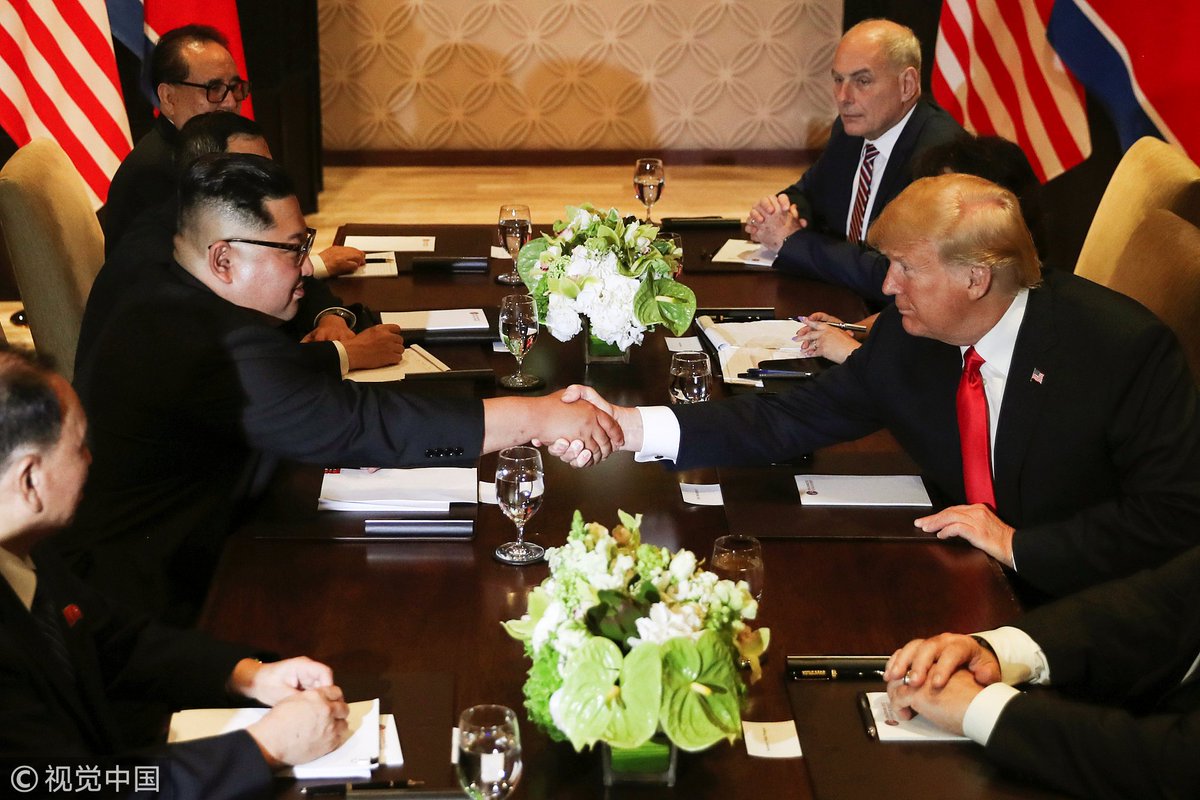 China on Wednesday said that U.S. President Donald Trump's recent pledge to stop holding military exercises with the Republic of Korea (ROK) proved once again that China's proposal on the Korean Peninsula issue was "reasonable and practical."

The situation on the Korean Peninsula had shown positive changes even before the meeting of the leaders of the Democratic People's Republic of Korea's (DPRK) and the United States in Singapore, according to Chinese Foreign Ministry spokesperson Geng Shuang.

"The fact that the DPRK had stopped nuclear tests, and the United States and the ROK had shown self-restraint on military drills, demonstrated the 'suspension for suspension' initiative proposed by China had been practically implemented," said Geng.

Geng said China's proposal not only aligned with the interests of all parties involved, but could also solve their most pressing security concerns.

"China's propositions on the Korean Peninsula issue are tenable and will eventually receive support from all parties," Geng said.

The United States will stop holding war games with the ROK, according to Trump in Singapore Tuesday after the summit with Kim Jong Un, top leader of the DPRK.

China's "suspension for suspension" initiative calls for the DPRK to suspend its nuclear and missile activities in exchange for the suspension of large-scale U.S.-ROK military exercises.
Click to expand...

Today's (14 June 2018) Singapore's Straits Times reported the results of the Singapore Summit between Trump & Kim, as seen by Analysts.

WINNER: DPKR Kim; WINNER-LOOSER: US Trump ........ Winner-Looser: South Korea Moon; WINNER playing an Important & Quiet Advisory Role: China's President Xi. Winner for being selected as a Neutral Location for Summit: Singapore. These were the opinions of experienced analysts inc. those from Bloomberg (US), Reuters, BBC, ST Singapore etc. I also tend to agree with them. Hopefully, there be predictable on-going advantageous results by these 2 leaders. Perhaps, President Xi supported by President Moon could also help them see light at the "end of the tunnel".

I love how the news cycle post-summit is China won. I thought China was sabotaging the summit, according to the US media, because they didn't want it to happen. Isn't North Korea a puppet of China? Where's the Chinese invasion of North Korea for turning their backs on their Chinese masters? According to the media China had spies everywhere in Singapore. What about the Chinese airliner that flew Kim to Singapore? For guy who's paranoid and was about to throw all-in on the US's side against China as reported, funny how he was all right with flying in a Chinese aircraft. His new friends, the Americans, couldn't lend him a spy-free airplane? Maybe they'll refurbish one for Kim from the same company that refurbished the Chinese Air Force One where China found all those surveillance devices hidden on board.

The historic summit between US President Donald Trump and the leader of the Democratic People's Republic of Korea (DPRK), Kim Jong Un, has brought the Korean Peninsula's nuclear issue on the right track of being solved peacefully through dialogue, Chinese State Councilor and Foreign Minister Wang Yi said.

He emphasized that this is in line with the common interests of different parties including the US and the DPRK.

Wang made the remarks before meeting with his American counterpart Mike Pompeo in Beijing on Thursday.

Wang added that the peaceful solution of the nuclear issue through dialogue conforms to the expectations of the international community, helps push forward the denuclearization of the Korean Peninsula and will finally lead to a real and lasting peace on the Peninsula and in the region.

China appreciates the relentless efforts made by the US side including its Secretary of State in this cause, Wang stressed.

The top Chinese diplomat also said he looked forward to listening to Pompeo's briefing of the summit while the two meet and to further exchanging opinions with the US side, so as to move forward the political solution for the nuclear issue on the Korean Peninsula.
Click to expand...

It is said that Kim flew on Chinese Premier Li Keqians' personal plane, and the aircraft was escorted by elite squadron of J-10's over all Chinese territory (China as far as Hainan and over SCS) and over allied territory (Vietnam). 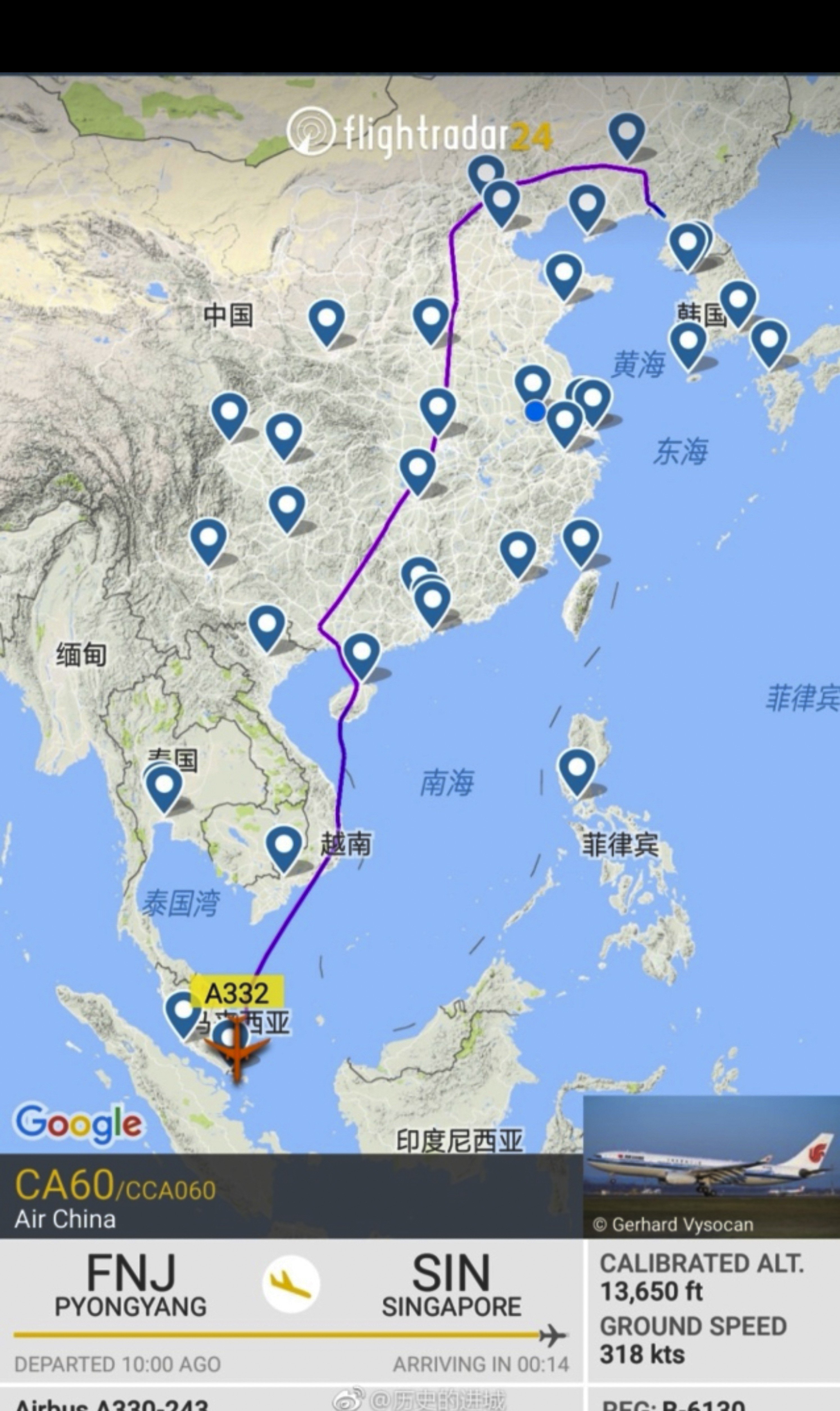 Now imagine, Kim is riding Premier Li Keqiang's plane, escorted by J-10's and J-20's, all over Allied territory (China, Vietnam). What message does that send to USA? 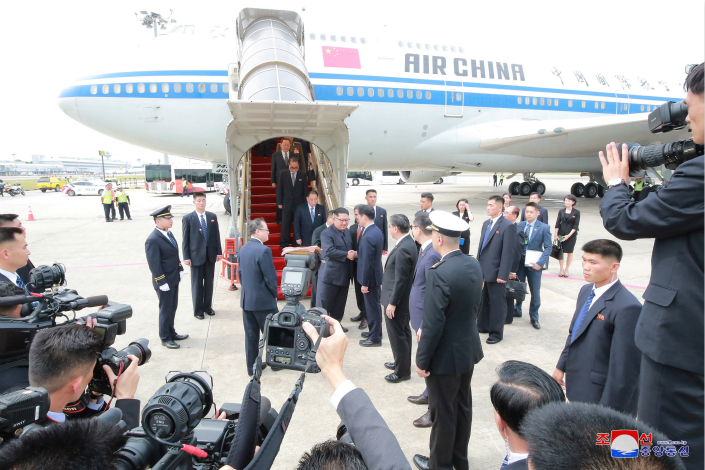 Chinese Premier Li Keqiang loaned his private plane to Kim Jong Un. The vassal prince is afforded the elite protection of Chinese intelligence and bodyguards.
You must log in or register to reply here.