The federal government has decided in principle that foreigners who invest in Special Economic Zones (SEZs) will be entitled to 100 per cent ownership and there will be no condition regarding the minimum amount of investment. A high-level committee has also been set up to review a proposal that non-resident Pakistanis be given a tax holiday on all kinds of income on investments including property, capital gains, dividends and profits on loans.

It has also been decided that investors in SEZs will be allowed to take abroad 100 per cent of their profit money.

According to a document made available to The Express Tribune, the government has decided to introduce Amendments in the Special Economic Zones Act under which the privilege package finalized for SEZs will be made part of the investment policy.

According to the document, it has been decided in principle that, in the proposed privilege package to promote investment in SEZs, 100 per cent foreign ownership will be given to those investing in sectors included in the SEZs’ priority list and that this will be made part of the Special Economic Zones Act. The document further states that it has also been decided that the Board of Investment (BOI) will provide the justification, in consultation with the Federal Board of Revenue (FBR), as to why 100 per cent foreign ownership cannot be allowed in certain sectors.

The document elaborates that the FBR and the BOI will prepare recommendations on the tax holiday proposal for non-resident Pakistanis. The committee will include representatives from the BOI, the Ministries of Finance and Industries & Production, and the FBR. The BOI has nominated CPEC Investment Board Project Director Asim Ayub as the focal person for the committee.

It has also been decided that the FBR and the Ministries of Finance, and Industries and Production will also appoint focal persons for the committee.

navip635 said:
Hey timepass, what you say to the authenticity of this article, not that I give much credit to this nikki outfit which done it's fair share of bad mouthing

navip635 said:
Hey timepass, what you say to the authenticity of this article, not that I give much credit to this nikki outfit which done it's fair share of bad mouthing

If Pakistan can find a better deal , then go for it. It is good competition. Deals aren't forced. China should also not approve any deal that's too risky or not practical. A deals under China Belt & Road benefit both sides. So any deal deemed not workable can be cancelled and that is good management not buyer's remorse.
D


The process of loading a total of 177 fuel assemblies into the core of the Karachi 2 reactor in Pakistan began on 28 November, China National Nuclear Corporation (CNNC) announced today. The Chinese-designed Hualong One reactor is scheduled for commercial operation next year. 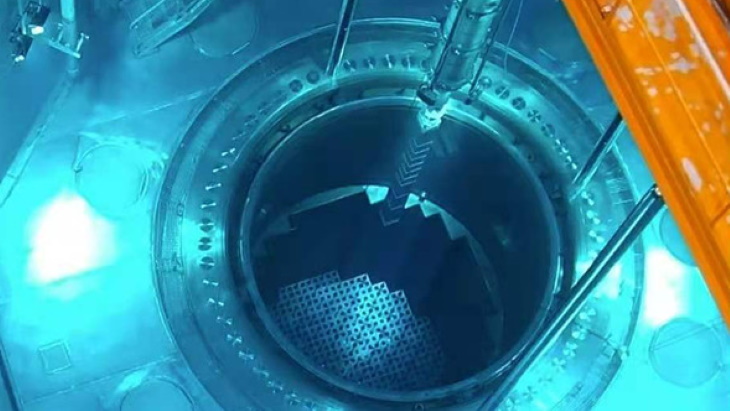 The first fuel assembly is loaded into Karachi 2's core (Image: CNNC)
CNNC said the loading of fuel "marks the unit's entry into the nuclear commissioning stage, and lays a solid foundation for subsequent criticality and grid-connected power generation".

Karachi 2 and 3 are the first export of China's Hualong One design, promoted on the international market as the HPR1000. CNNC noted the construction of the project has also promoted the development of related industries in Pakistan, providing more than 10,000 jobs for the local area.

The largest project of CPEP so far, the M5 motor way, has been successfully completed.