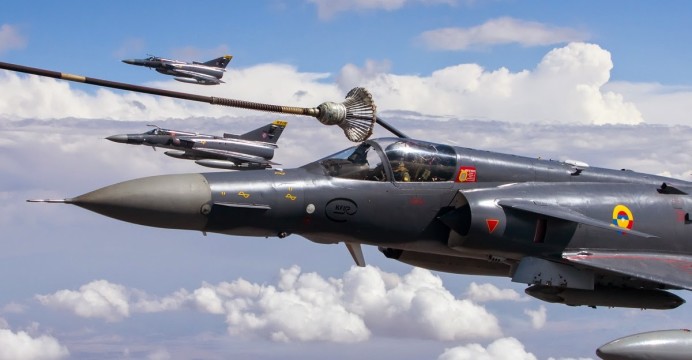 It is possible that the PAF’s own JF-17 Block-III could align (at least nearer than the Block-I/II) to Argentina’s preferred (Western oriented) configuration. Granted, avionics inputs would have to come from Western vendors that are comfortable with the JF-17, such as Aselsan and Indra. This limits Argentina’s options.

We have updated our post.
NASA P-3B now searching for the missing Argentine Navy submarine & U.S.
Navy deep sea rescue crews being spun up out of San Diego.
Deployment of P-8s next I would imagine.
Chile & UK offered help, Chilean aircraft headed to area:
Click to expand...

The aircraft and its 21-person crew will depart El Salvador’s Comalapa Air Base, where it was supporting counter-illicit trafficking maritime patrol operations. Once in Bahia Blanca, they will join the ongoing international search for the Argentinean Navy vessel and its crew, as requested by the government of Argentina.
...

URC is deploying two independent rescue assets based on a number of factors, including the varying depth of ocean waters near South America's southeastern coast and the differing safe operating depths of the two rescue systems.

The second rescue system, the Pressurized Rescue Module (PRM) and supporting equipment will be transported via additional flights and is scheduled to arrive in Argentina early next week.

The SRC is a McCann rescue chamber designed during World War II and still used today. SRC can rescue up to six persons at a time and reach a bottomed submarine at depths of 850 feet. The PRM can submerge up to 2,000 feet for docking and mating, with a submarine settled on the ocean floor up to 45-degree angle in both pitch and roll. The PRM can rescue up to 16 personnel at a time. Both assets are operated by two crewmembers and mate with the submarine by sealing over the submarine's hatch allowing Sailors to safely transfer to the rescue chamber.

The URC Sailors deploying with the rescue systems are highly trained on its use and routinely exercise employing the advanced technology in submarine rescue scenarios.

The U.S. government is supporting a request from the government of Argentina for international assistance to the ongoing search for the missing submarine and possible rescue opportunities once the vessel and crew are located.

I didn't post about the sub (personally I think it's all over, just hope they'll find where the grave is), but now noticed, at a major Czech server where I read my emails, an update which comes from Reuters Argentina says signals detected, likely from missing submarine
Updated 2 hours ago
Please, Log in or Register to view URLs content!

Amigo where are you

Satellite calls too ‘weak’ to detect missing Argentine submarine with 44 crew members
A search has turned up no sign of the submarine on the ocean’s surface, but the crew should have ample supplies of food and oxygen.
A storm on Sunday complicated efforts to find an
Please, Log in or Register to view URLs content!
in the South Atlantic with 44 crew members, while satellite calls thought to come from the vessel did not help searchers identify the vessel’s location.

The defence ministry has said the ARA San Juan appeared to try to make contact through
Please, Log in or Register to view URLs content!
on Saturday between late morning and early afternoon. The vessel was 432km (268 miles) off Argentina’s coast when its location was last known early on Wednesday.

As waves of up to 8 metres and winds reaching 40 knots complicated the search by sea, authorities spent Sunday trying to trace the submarine’s location through data from the satellite calls without significant progress, a navy official told reporters.

“We analysed these signals, which as we know were intermittent and weak,” said Gabriel Galeazzi, a naval commander. “They could not help determine a point on the map to help the search.”

It said the last call it detected from its device was on Wednesday, the same day the government said the vessel vanished.

More than a dozen boats and aircraft from Argentina, the United States, Britain, Chile and Brazil had joined the effort. Authorities have mainly been scanning the sea from above as the storm made the search difficult for boats, navy Admiral Gabriel Gonzalez told reporters.

“Unfortunately these conditions are expected to remain for the next 48 hours,” Gonzalez said from the Mar del Plata naval base, about 420km (240 miles) south of Buenos Aires where the submarine had been heading toward before vanishing.

A search of 80% of the area initially targeted for the operation turned up no sign of the submarine on the ocean’s surface, but the crew should have ample supplies of food and oxygen, Balbi said.

The navy said an electrical outage on the diesel-electric-propelled vessel might have downed its communications. Protocol calls for submarines to surface if communication is lost.

Three boats left Mar del Plata on Saturday with radar detection probes and were following the path that the submarine would have taken to arrive at the base in reverse, Balbi said.

“Those probes allow the boats to sweep the ocean floor during their journey and try to make a record of the floor in three dimensions,” Balbi said.

The US Navy said its four aircraft were carrying a submarine rescue chamber designed during World War II that can reach a bottomed submarine at depths of 850 feet and rescue up to six people at a time. The chamber can seal over the submarine’s hatch to allow sailors to move between the vessels.

The dramatic search has captivated the nation of 44 million, which recently mourned the loss of five citizens killed when a truck driver plowed through a bicycle path in New York City.

Crew members’ relatives gathered at the Mar del Plata naval base, where the submarine had once been expected to arrive around noon on Sunday from Ushuaia. However, it would not be unusual for storms to cause delays, Balbi said.

At the entrance of the base, locals hung signs with messages in support of the crew members and their families on a chain-link fence.

“Strength for Argentina. We trust in God. We are waiting for you,” read a message inscribed on a celestial blue-and-white Argentine flag hanging on the fence.

“Let’s go, men of steel. We are waiting for you at home,” read a message written on a picture of the submarine.

“I also pray for the men of the crew of the Argentine military submarine which is missing,” the pontiff said.

The ARA San Juan was inaugurated in 1983, making it the newest of the three submarines in the navy’s fleet. Built in Germany, it underwent maintenance in 2008 in Argentina.

That maintenance included the replacement of its four diesel engines and its electric propeller engines, according to specialist publication Jane’s Sentinel.

The Brazilian aircraft manufacturer Embraer confirms that it will deliver its first aircraft transport and refueling tanker tank KC-390 from mid-next year, the flight tests having reached an advanced stage.
In a third quarter earnings release issued Oct. 27, Embraer said it will "increase production of the KC-390" next year, "with the first delivery of this jet expected in the second half of 2018". To date, the Brazilian Air Force is the only confirmed buyer for the jet, with the service of a fleet of 28 aircraft. The company has already submitted a discount plan for its first two customer aircraft in 2018.

The development and certification of the KC-390 has progressed as planned, with both prototypes (001 and 002 aircraft) exceeding 1,350 flight hours, with high-altitude parachute dropping tests and the use of goggles. night vision.

Production activities are progressing, with the first three production units already in the assembly process and parts manufacturing having begun for 006, 007 and 008 aircraft.
Meanwhile, the Brazilian manufacturer says it is in "an advanced stage of negotiation" with the Portuguese government on a potentially five-aircraft sale, with Lisbon also wanting an option for a sixth example.

The KC-390 is equipped with avionics with dual head-up display, with a complete mission system. The aircraft is also equipped with a complete system of self-protection. Pilots will have "fly-by-wire" controls with flight control system and optimized functions, which will ensure excellent performance with a reduced crew. The crew will have four large reconfigurable screens and two side handles, the KC-390 will allow secure uses from semi-prepared tracks.

The aircraft will have a take-off capacity of approximately 72 tonnes with a maximum load of 20 tonnes. The aircraft is 33.4 meters long and 11.4 meters high and has a wingspan of 33.9 meters. Equipped with a cargo door at the rear, the aircraft can also be quickly arranged for refueling in flight, as well as for specific missions, such as wiretapping for example. The KC-390 is powered by two IAE V2500-A5s.

Argentine Navy official: the noises heard earlier today are NOT from the missing submarine SAN JUAN - might be biological. Meanwhile US Navy rescue systems have arrived in Argentina. Search in rough but improving weather continues. - graphic shows units involve.
Click to expand...

A new trace in the form of a “hydroacoustic anomaly” could help locate the Argentine submarine ARA San Juan which has been missing since November 15.

Argentine Navy spokesman Enrique Balbi told reporters on Wednesday that the anomaly had been detected in the morning of November 15, some 30 miles north of the submarine’s last known location.

Asked whether this anomaly could have been an explosion aboard the submarine, Balbi said the navy would not jump to conclusions adding that more details would be known on Thursday.

Previous reports of heat signals possibly coming from the submarine have been dismissed.

Relatives gathered at the Mar del Plata base in anticipation of news about the ARA San Juan expressed their dissatisfaction with both how the situation is being handled and the fact that the navy sent 44 sailors on a 10-day trip in such an old submarine.

ARA San Juan is a 32-year-old TR-1700-class diesel-electric submarine built by Germany’s Thyssen Nordseewerke. The submarine returned to service in 2014 after several years of repairs.

Jura said:
I didn't post about the sub (personally I think it's all over, just hope they'll find where the grave is) ...
Click to expand...