Registered Member
No, keep this beserk guy here, he offers quality entertainment in this place.
O

Registered Member
The T-90s need to be airlifted. I haven't seen T-90s in India being truck mounted and delivered to LAC like we have seen for Chinese side. There have been some videos showing dozens if not hundreds of trucks driving up to LAC with tanks and various vehicles. India moves T-90 either by rail or by plane. Neither side has rail up to LAC. India's T-90 deployed closer to the flashpoints were airlifted and only a few are there as token media projects just like Modi's token media photos with a fake hospital.

Most IA T-90s are deployed further west and south of flashpoints. Who knows how far deep within India but there has only been one or two flights of T-90 delivery to the nearest airfields which are already quite far a drive from the flashpoints. Each lift can carry 2? T-90s? if not just 1. If India indeed has airlifted dozens of T-90s, the media reports wouldn't be limited to showing just a few. The rest are deployed much further back and nowhere even close to 4000km altitude! This is actually smart! China also has not deployed MBTs or even Type 15 right on the flashpoint areas but also presumably further back. Artillery and initial air strikes are going to make mince meat out of both sides' frontlines.

India's side of LAC and their airfields are much lower altitude. If the T-90's highest deployment is around where Indian airfields are, where those IL-76 and C-17 planes have landed. They are no 4000km+ altitude.
S

Yes, I too can confirm T90s have not been deployed to low earth orbit
O

silentlurker said:
Yes, I too can confirm T90s have not been deployed to low earth orbit
Click to expand...

LOL yeah my mistake, groggy mind in a hurry. But the facts stand. Indian media and military publications made huge fuss about how they have begun airlifting T-90s a few months back. I remember seeing visuals of T-90s being loaded/unloaded. Only one or two of these flights were broadcasted and they have totally stopped. The facts remain that T-90 do not perform well or perform at all at high altitudes. The Indian airfields are nowhere even close to 4000m above sea-level. The highest altitude airfield they have is just above 3000m.

So there are two or four T-90s that were sent to airfields near the LAC well under 3000m above sea level. Berserk should explain how T-90s are deployed in numbers up to 5000m or even above 4000m. Maybe the drove one close to the flashpoints and realised the tank barely moves because for some mysterious reason, they have stopped sending Il-76 and C-17s with T-90s a while ago already (no more noise and showing off) and they have started formally looking into acquiring the Sprut.

Strictly one(and even that is actually impressive for a strip so high up in the Mountains).
But 2 46+ ton class single loads are firmly in An-124/C-5 area even for full-sized airfields at sea level anyway.
Unlike T-90S, the hero of the topic(~33-35t ZTQ-15) is likely to be specifically designed to be lifted by Y-20 in pairs.
At very least it's the case with very similar American MPF(which admittedly is slightly heavier, but C-17 also lifts somewhat more; furthermore, abundant air refueling capability lets USAF get closer to the practical limit of their transport aircraft on regular basis).
D

asdf1234 said:
Mods how come this guy seems to be left unchecked to roam around and derail threads..? I for one am here to check up on the ZTQ-15 and couldn‘t care less about at what altitudes a T-90 can be deployed...
Click to expand...

‘Cause some are over enthusiastic about the ’T90 VS ZTQ15‘ scenario, which should be unlikely to happen due to the different environments where they are deployed.

dawn_strike said:
‘Cause some are over enthusiastic about the ’T90 VS ZTQ15‘ scenario, which should be unlikely to happen due to the different environments where they are deployed.
Click to expand...

Still has nothing to do with this thread. This isn't a "VS" thread or a fanboy thread. Those who want to talk about the Indian T90 can go on the Indian forums for that.
F

berserk said:
For simple reason T 90 deployment cost more and as for domination sorry to hurt your fragile ego but nothing in your arsenal is dominating T 90S
Click to expand...

What an asinine statement. No disrespect to Russian tanks, but the T-90S is approaching 20 years out of date and you are seriously delusional if you believe that the PLA doesn't have better tanks in service. It's not all about the gun and armor that decides which tank is better, but yes the ZTZ-99A is almost certainly superior to that of T-90S also. FCS, battle management system, thermals sights, etc. are also better, simply because the T-90S is, as I said, beginning to show its age. Other non-tank equipment in PLA arsenal that will also are HJ-12 ATGMs, numerous types of UCAVs, barrages of 300/370mm rockets from PHL-03/16, salvos from AFT-10 missile carriers, etc. And that is even if your tanks can get sent to the front without running into mechanical failures. Remember when your team got disqualified from the 2017 Tank Biathlon because not one, but both of your T-90S tanks just suddenly broke down?

And yes of course the T-90S would win, at least on paper, in a head-on fight with a ZTQ-15 if you pretend that they are shooting at each other in completely flat terrain. But chances are that they will be facing ZTQ-15s in mountainous areas (the terrain that the ZTQ was designed to fight in), in which the hydro-pneumatic suspension and more advanced targeting systems would give it a significant or possibly even decisive advantage over the T-90S, especially when these areas are far from ideal for Soviet/Russian MBTs in general. You can go ask the Azeris (particularly their 4th Army Corps) how their T-90S tanks performed in a similar environment, and they were mostly facing ATGMs and RPGs, with occasional artillery strikes.

In any case, your T-90Ss are nowhere close to being as powerful as you portray them to be, or at least not anymore. And regarding that T-72 upgrade you keep stating as being equivalent to our best tanks, it just looks like one of those upgrade packages that the guys at UVZ scams you with if you are too poor to buy their T-90s or even T-72B3s. Even if you manage to complete the upgrade of 1000 T-72M1s to that standard within this decade, I doubt that they would surpass capabilities of even the ZTZ-96A, since its base armor is unchanged from the T-72M1 which was already bad for the 1990s.

This reminds me of a hot rod at a drag race. 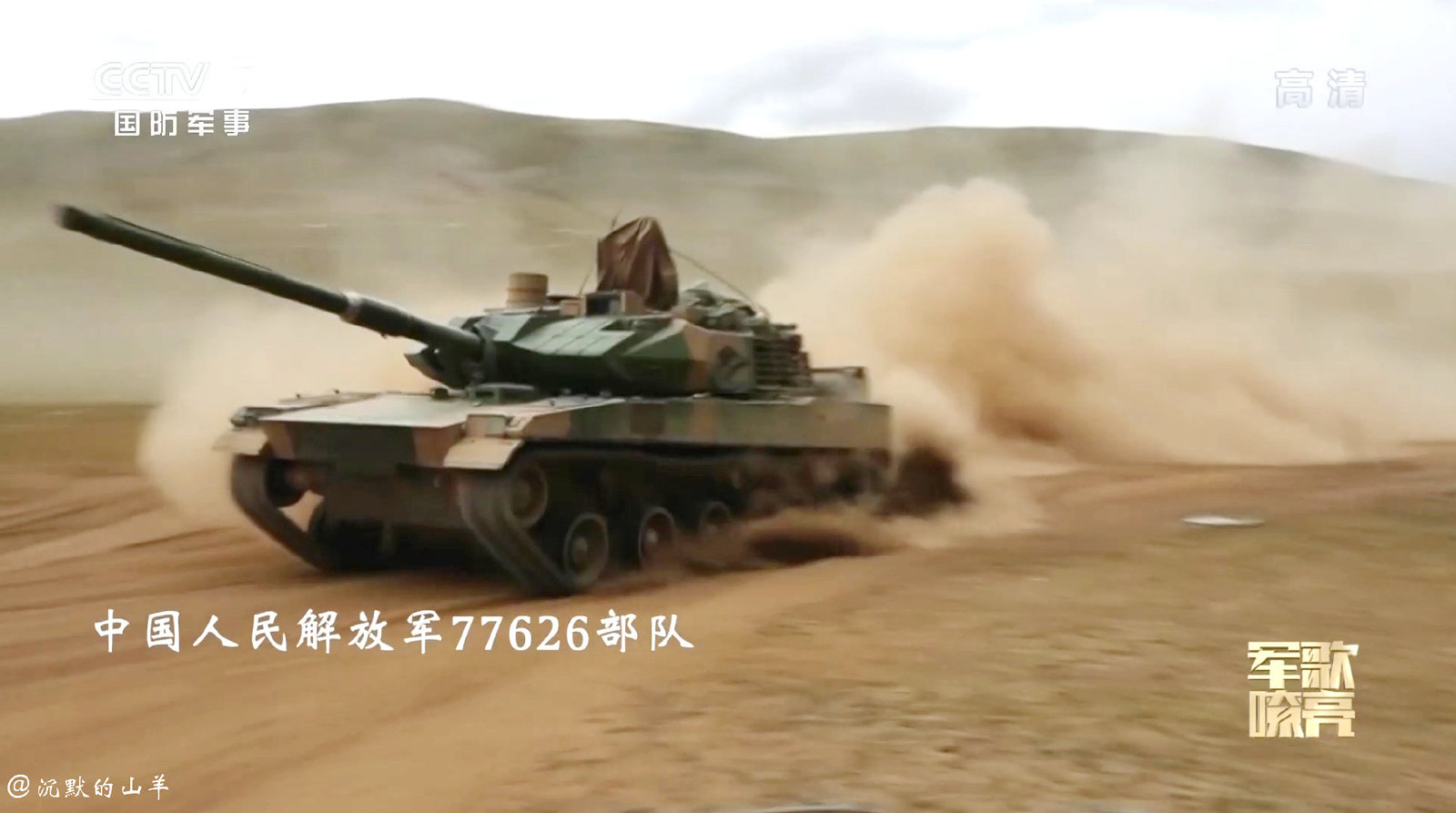 Registered Member
LOL Upgraded T-72s being equal to ZTZ-99 not even talking 99A. The best T-72 upgrade is roughly comparable Type 96A! Everything is roughly equivalent but India doesn't have the best T-72 and will start upgrading lol meanwhile PLA has had Type 96A for about a decade with over 2 thousand in service. So again India will take years BEFORE it can begin to catch up to PLA's circa year 2010 level.

Edit I'm pretty sure Type 96A has superior frontal protection to the T-72 and both are equally dead when it comes to side shots. Roughly equal sensors and fire control, gun, ammo, engine output. Latest T-72 upgrade still won't feature a true hunter killer system and India's upgrade would be questionable. Puhlease Berserk. >2000 Type 96A against ongoing upgrades to T-72 pffffffffft. This is why Indian chauvinists have nothing left but to say "T-72 and T-90 is much much much better than your Type xyz because it is and I say so!" LOL and we're the hypocrites and fanboys
You must log in or register to reply here.