haven't seen her from this angle yet (sorry if it's a repost): 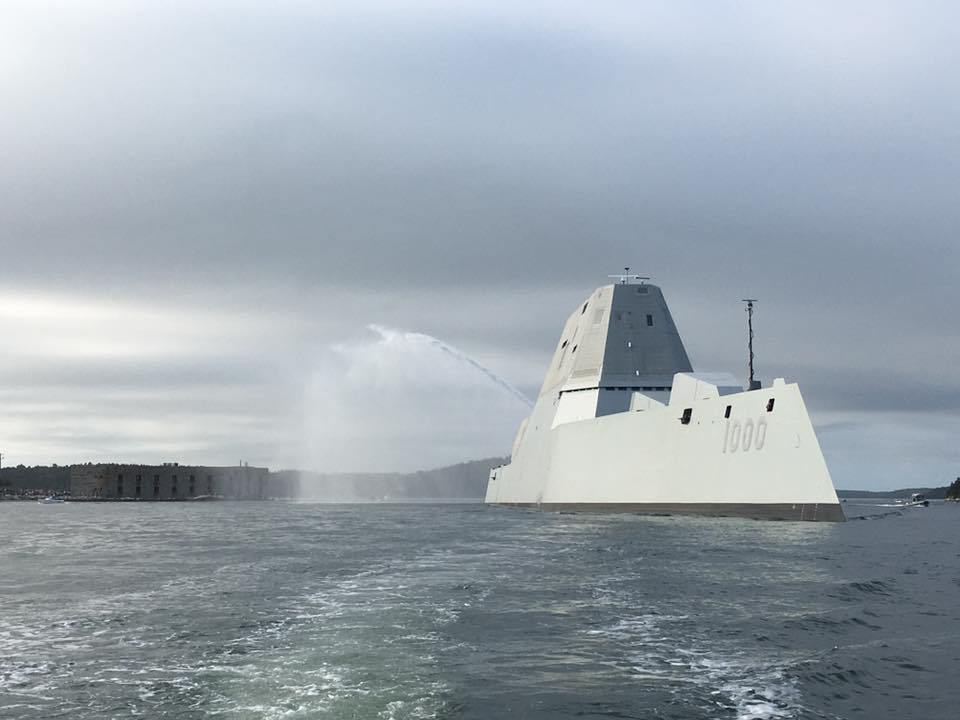 Jura said:
... anyway I'm really curious about the Zumwalts, as I hope they won't have
(one hundred years ago, a flush-decker would sail from San Diego to Hawaii without refueling, something which "soooo sophisticated" LCS can't do, my gosh ... hope Zumwalts won't be that super-smart)
Click to expand...

I could fill the next five pages of this thread with new classes of ships that experienced shakedown issues but went on to become successfully operational.

Staff member
Super Moderator
While it is true that many classes of vessels have issues when they are first deployed, and that particularly in new classes with new power and or electrical systems this is true, coming on the heels of the LCS problems, there is no way that US Navy and military detractors will not have a field day over this...including on this forum.

Naval Today said:
Sailors aboard USS Zumwalt, the U.S. Navy’s next-generation stealth destroyer, found a fault in the ship’s engineering plant while the ship was in Norfolk, navy officials told to USNI News.

Zumwalt was conducting weapons testing and training en route to its San Diego homeport when the engineering casualty was discovered.

“The crew discovered the casualty after detecting a seawater leak in the propulsion motor drive lube oil auxiliary system for one of the ship’s shafts. The built-in redundancy of the ship’s propulsion plant allows this first-in-class ship to operate with multiple engine configurations. However, it was determined that the repairs should be completed in port prior to the ship transiting to sea,” the U.S. Navy told USNI News.

The issue might take up to two weeks to be fixed, it was further said.

It is not clear whether the engineering casualty will set back Zumwalt’s commissioning ceremony that was scheduled for October 15 in Baltimore. Following the commissioning, Zumwalt is set to continue its transit to San Diego where it will enter a post delivery availability and mission systems activation and is expected to be integrated into the fleet in 2018 following test and evaluation.

The lead ship in the class, USS Zumwalt is the first U.S. Navy combatant surface ship to utilize an integrated power system (IPS) to provide electric power for propulsion and ship services. According to the Navy, the new system generates approximately 78 megawatts of power.

Zumwalt is also larger than the current U.S. Navy destroyers measuring 610 feet in length and 80.7 in width. In comparison, Arleigh Burke-class destroyers are 505 ft long and 66 ft wide.
Click to expand...

So, they discovered a sea water leak in one of the auxiliary systems dealing with one of the vessels shafts.

This ship has been out on several cruises, so ti will be interesting to see if this is a maintenance issue, or if there are seal failing prematurely, or what. My gues sis going to be that someone forgot to do something, or did it wrong...but time will tell and they are going to repair it right there in Norfolk.
Last edited: Sep 21, 2016

Jeff Head said:
...but time will tell and they are going to repair it right there in Norfolk.
Click to expand...

please no shorting out on an all-electric ship (just saying, I know it's not what happened this week)

Jura said:
please no shorting out on an all-electric ship (just saying, I know it's not what happened this week)
Click to expand...

Well, let's certainly hope not...but I will guarantee you that they have many layers of digital protective relays guarding against any and all shorting.

My guess is they will fix it pretty quickly and establish policies and procedures to keep it from happening again.

sure, while reading about the Zumwalts in a Polish naval journal several years ago, I finally learned what the abbreviation UPS (backup) means, because it was explained in that article (of course I had been using UPSs for at least a decade before just didn't know the abbreviation): it's
Uniterruptible Power Supply
and that article said a Zumwalt should be able to be powered for up to ten minutes from some huge UPS on board


Jeff Head said:
My guess is they will fix it pretty quickly ...
Click to expand...

I read it and I would characterize the article as sad ...

typical product of "concurrency" (by the way I disagree completely with the idea of the author "to build a single full-up DDG-1000 as a technology demonstrator") ... and in the end (just one more quote here):

... had key capabilities withheld under the false guise of “savings.”
Click to expand...

and I'll quote something else in the US Military thread (the recent discussion about AA defenses there)
EDIT it's https://www.sinodefenceforum.com/us-military-news-reports-data-etc.t1547/page-618#post-417950
Last edited: Oct 1, 2016

Registered Member
For the programm and price..!!! useless comments again

Completely unusual for her armament different than Ticonderoga, Burke also different mission but remains enough curious, in more no AEGIS and if as i think right now guns are always not able to fired vs ships he have only for anti-ships weapons Helfire of MH-60, so LRASM/AGM-158C is later very welcome ...

For AAW it is clear Zumwalt is planned for to be used in a SAG with escort CG, DDG and ESSM with it get sufficient.

Main points very stealth but exist others Visby, Skjold, more small, but for some ideas Ex : no smokestack yet some ships use it, for Island yes completely new.

And mainly much less vulnerable with stealth but especialy VLS on 4 areas so much more difficult to damage or sunk than a Ticonderoga or Burke VLS on 2 areas about 32/61 missiles...sure if a VLS with majority missiles inside is destroyed these vessel are cut into two.

But maybe finaly this Class can be usefull and all funds not lost... with her new hull can serve for a true successor for Ticonderoga, right now the first retired in 2019 replaced by AB Fl III excellent DDG but less potent, a new.. CG(X) with only a gun and 100+ missiles surely up to about 30/40 cell's can replace a gun.
Last edited: Oct 1, 2016
You must log in or register to reply here.