quote of the day comes from inside of
Navy’s new top officer vows to ‘think differently’
Please, Log in or Register to view URLs content!
:
“I believe our Navy’s strategic direction is rock solid and that our Navy is in great shape,” Gilday said. 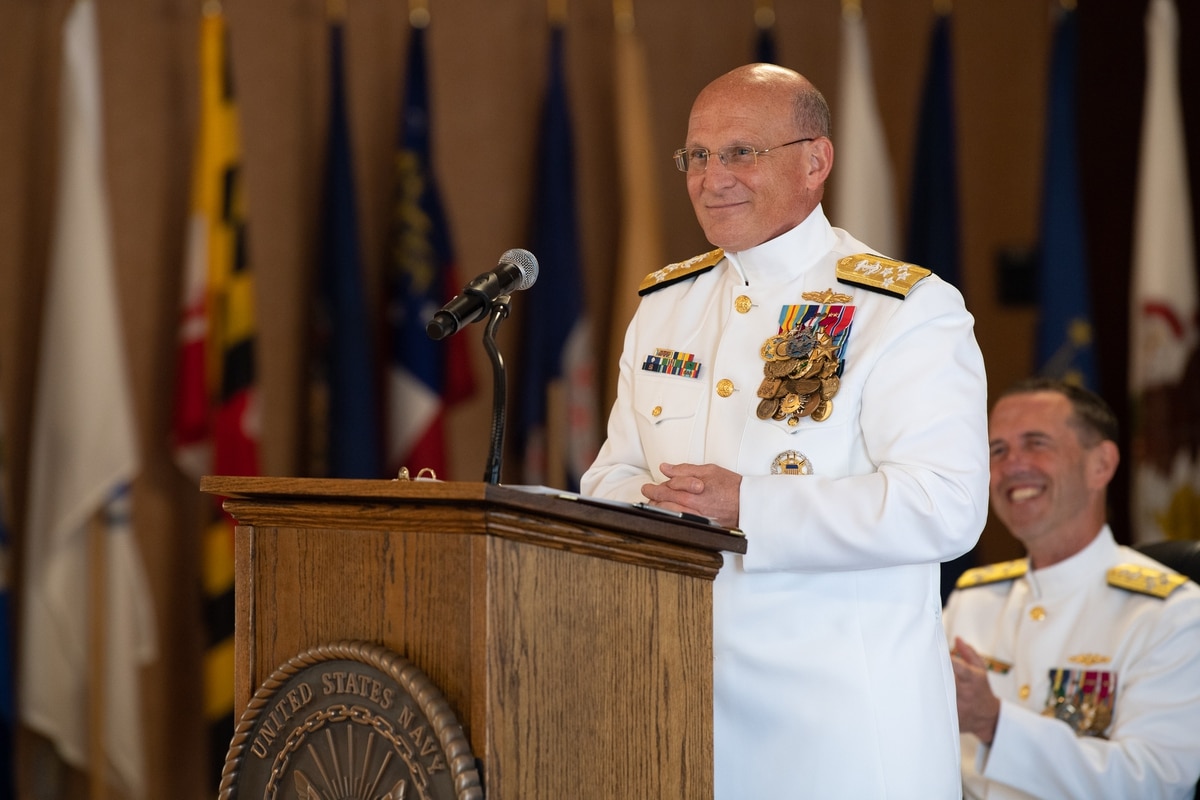 The South Korean government’s intent to end an intelligence-sharing agreement with Japan is more than a slight toward its neighbor, but a blow to U.S. efforts at monitoring North Korean activities and countering Chinese influence, experts say.

South Korea announced Thursday it doesn’t plan to renew the General Security of Military Information Agree (GSOMIA) with Japan and the U.S., the latest escalation in a brewing diplomatic spat between Seoul and Tokyo.

The announcement from South Korea’s Moon Jae-in administration follows moves by each side remove the other from preferential trade agreements. However, the move will likely harm much more than the easy exchange of North Korea missile intelligence, wrote Victor Cha, a senior advisor and the Korea Chair at the Center for Strategic and International Studies (CSIS).

“No policy action of this type takes place in a vacuum. This development is beneficial to countries opposed to the U.S. alliance system including North Korea, China, and Russia,” Cha wrote.

“The Department of Defense expresses our strong concern and disappointment that the Moon Administration has withheld its renewal of the Republic of Korea’s General Security of Military Information Agreement with Japan. We strongly believe that the integrity of our mutual defense and security ties must persist despite frictions in other areas of the ROK-Japan relationship. We’ll continue to pursue bilateral and trilateral defense and security cooperation where possible with Japan and the ROK,” said a statement from Army Lt. Col. Dave Eastburn, a Pentagon spokesman.

Relations between the two nations have been frosty for decades, dating back Japan’s colonization of Korea following the Russo-Japanese war. The current flare-up is related to a December incident when Japan claimed a South Korean warship locked its fire-control radar onto a Japanese maritime patrol aircraft. Korea countered the Japanese aircraft first buzzed the warship, according to a paper by Patrick Buchan, the director of the U.S. Alliances Project and a fellow for Indo-Pacific Security at CSIS, and Ben Rimland, a research associate at CSIS.

Buchan and Rimland suggest one of the likely paths to bring the two nations closer together involves increased military interactions between nations.

“Military-military cooperation, particularly between the two navies, has seen the U.S. leverage its role as senior alliance partner to offer a neutral practice ground for both nations,” Buchan and Rimland wrote.

In the past, the U.S. Navy has helped foster better communication and cooperation between all three nations. The 2016 Pacific Dragon exercise an example of all three navies working together. The exercise included coordinated live ballistic missile tracking event designed to test each nation’s Aegis Ballistic Missile Defense System capabilities, according to a Navy statement.

“The stakes could not be higher for the United States,” Buchan and Rimland write. “With President Trump’s on-again, off-again nuclear diplomacy with North Korea again taking off, and further Chinese moves to demonstrate a claim to hegemony in East Asia, maintaining a united front among allies is critical.”
Click to expand...

before F-35s take over CAS missions, LOL
Click to expand...

Boeing Co. will make the wings on the remaining
Please, Log in or Register to view URLs content!
attack aircraft that are slated to receive an upgrade, the Defense Department announced this week.

The company on Wednesday received an indefinite-delivery/indefinite-quantity (IDIQ) contract worth a maximum of $999 million for A-10 wing replacements.

"This contract provides for up to 112 new A-10 wing assemblies and up to 15 wing kits," the award stipulates.

Boeing, which is teaming up with Korean Aerospace Industries for the effort, said the service has ordered an initial 27 wing sets and will manage the production of up to 112 sets and spare kits.

Only 109 A-10s still need to be re-winged, and the contract will include up to three spares, according to service spokeswoman Ann Stefanek.

"Our established supply base, experience with the A-10 structures, and our in-depth knowledge of the U.S. Air Force's requirements will help us deliver high-quality wings to meet the customer's critical need," Pam Valdez, vice president of Air Force services for Boeing Global Services, said in a statement.

The Air Force will allocate $239.6 in procurement funds from past fiscal budgets for the effort, known as the "A-10-Thunderbolt II Advanced-Wing Continuation Kit," or "ATTACK" program, DoD said.

The Air Force had initially set aside $267 million for the effort, but DoD has reevaluated that estimate, Stefanek told Military.com Wednesday.

The news comes after the recent completion of Boeing's first re-winging contract, awarded to the aerospace company in 2007.

The Air Force in 2018
Please, Log in or Register to view URLs content!
to rebuild wings for the A-10, affectionately known as the Warthog, after the service ended its arrangement with Boeing; Nevertheless, the company has received the second contract.

Officials have not committed to re-winging the entire fleet.

"We re-evaluate every year depending on how many aircraft we will need; the length of the contract goes through 2030 so it gives us options as we go forward," Stefanek said.

The service has 281 Warthogs in its inventory. Two A-10s were
Please, Log in or Register to view URLs content!
. One of them had received the upgrade.

The planes, which entered service in 1976 and have
Please, Log in or Register to view URLs content!
to the Middle East, Europe and the Pacific, have played an outsized role in the air campaign that began in 2014 against the Islamic State of Iraq and Syria, or ISIS, helping provide close-air support for Iraqi and U.S. partner forces on the ground.

The A-10 has also been instrumental in air operations in Afghanistan.
Click to expand...

and the story goes on:
Fate of A-10, F-15 to be decided this fall
15 hours ago
Please, Log in or Register to view URLs content!
Click to expand...

The simple explanation is that funds were tight during the sequestration period of the Obama administration. It is a matter of prioritization on what to let go. When the Trump administration came in, funds started flowing in and the A-10 survived but also came the funds for necessary upgrade work.

Brumby said:
The simple explanation is that funds were tight during the sequestration period of the Obama administration. It is a matter of prioritization on what to let go. When the Trump administration came in, funds started flowing in and the A-10 survived but also came the funds for necessary upgrade work.
Click to expand...

the point is
August 29, 2015
To Prove Its CAS Capabilities, F-35 To Face Off Against A-10
Please, Log in or Register to view URLs content!

the point is the US is apparently behind
Click to expand...

Please, Log in or Register to view URLs content!
but I have no idea who is kidding whom and how

In the September article of the Air Force Magazine, six steps to greater air dominance.

Expand capacity. “The Air Force We Need” envisions increasing combat fighter squadrons from 55 to 62. That requires buying at least 72 new fighters per year, which is also the smallest number necessary to begin reducing the average age of the fighter fleet from today’s 28 years. Air Combat Command boss Gen. James Holmes said 62 combat squadrons could be attained by 2024. Most of those fighters will be F-35A Lightning IIs.

Early indication that the AETP rollout refit will be expansive.

Advanced electronic warfare for F-15. The Eagle Passive Active Warning Survivability System, or EPAWSS, may not “make an F-15 into an F-35 or F-22,” said ACC chief Holmes, but it will help F-15s “buy back” penetrating capability, making it harder to detect them so they can get closer to enemy air defenses. A similar system could eventually be developed for the F-16 as well.
Click to expand...

Questionable whether an EPAWSS like system will be developed for the F-16 as there is already tension over the need to upgrade the F-16s given the rollout of the F-35As.

Enhanced electronics. Both the F-22 and F-35 are receiving new electronic warfare systems and weapons, as well as the ability to communicate stealthily with each other and with fourth-gen systems. The F-22 upgrade, called Increment 3.2B, will invest $1.75 billion to add new air-to-air weapons, processors, and data links. The F-35 will gain range and payload with the addition of 480-gallon drop tanks and newly reconfigured weapons bays that will be able to accommodate six missiles instead of four. The F-35 is also set to receive the Block 4 combat enhancements package, which will include two major software updates per year for new electronic warfare sensors and weapons.
Click to expand...

Looks to be some sort of plan to finally allow the F-35 and F-22 to talk each other stealthily.

Improved radars for fourth-generation fighters. The Air Force has been adding AESA (active electronically scanned array) radars to the F-15 fleet for more than a decade, and the F-16 fleet’s first AESA systems are slated to be operational this year. The F-16 is also getting new digital radar warning receivers, software-based radios, and a new operational flight program.
Click to expand...

The new-build F-15EX. Congress has authorized the Air Force to purchase the first eight of up to 144 F-15EXs in 2020. These jets would be used to accomplish air superiority in places where defenses are either absent or beaten down, as a domestic interceptor, or as a missile carrier outside heavily contested airspace. By shooting targets designated for them by F-22s and F-35s behind enemy lines, they might also carry hypersonic missiles.
Click to expand...

Affirmation that tactically, the F-22s and F-35s will have to shoulder the heavy lifting as the F-15EX (even with upgrades) will only play a supportive role. Interesting that both China and Russia continue to take a differing view with their reliance on 4th gen birds.
Click to expand...

one of the sentences you posted is, quote,

Jura said:
... now I did a google search and what seems to be going on (until and including FY2019) is

just noticed, have no idea what this means

("this" = the Pentagon saying something in 2014, then probably doing nothing, and now repeating what sounds similar to what was said in 2014, but with money tripled)

inside you (if I understood the formatting correctly) said

"Interesting that both China and Russia continue to take a differing view with their reliance on 4th gen birds."

almost missed this sentence you quoted:

"The Eagle Passive Active Warning Survivability System, or EPAWSS, may not “make an F-15 into an F-35 or F-22,” said ACC chief Holmes, but it will help F-15s “buy back” penetrating capability, making it harder to detect them so they can get closer to enemy air defenses."

Jura said:
interesting since
Why did the Air Force cancel the F-15C electronic warfare upgrade?
May 29, 2018
Please, Log in or Register to view URLs content!

what gives, I mean hasn't the EPAWS been cancelled??
You must log in or register to reply here.