stan hyd said:
That't quite a ramp up in fleet size, do how do you see the FFG competition concluding?
Click to expand...

Do you think their is an appetite/capacity for the future FFG (X) to become the Perry for foreign Navies in the Pacific/China Sea?
Click to expand...

My opinion
on this one there already is with a number of nations expressing interest in LCS derived platforms and inspired designs.

I wonder as the FFG design becomes the standard if we will see the USN start selling off the LCS ?
Click to expand...

That's a tough one as the existing LCS have been pointed to as "Undergunned" so the question would be who would want them? If you are more worried about insurgent operations and Piracy then LCS seems a good pick. Despite the critics that is still a relevant mission role. They are Peace keeping ships. Much like comparing the Army Stryker to a Bradley or a Super Tucano COIN aircraft to a F15. These are the product of a mindset where in the Opfor they were designed against is of a far lower technological level and a lesser need of actual battle.

The problem that pushed for FFG(X) is less failures of the ships themselves (cue rant from critic) but more from lack of capacity against peer Naval power. The latest LCS variants call them Block1 if you will are the result of shifts in Naval priority from that lower threat level of running down some fishing boat with a bunch of Yahoo's armed with AKs a machine gun an RPG and a mortar into the potential of facing a vessel cutter or patrol ship firepower. This farther drives to FFG(X) which is the sort of Block 2 where in the Navy is targeting equal firepower.
S

TerraN_EmpirE said:
I am not @Jeff Head but I can tell you what he thinks on this by pointing to his own thread on the subject

My opinion
on this one there already is with a number of nations expressing interest in LCS derived platforms and inspired designs.

That's a tough one as the existing LCS have been pointed to as "Undergunned" so the question would be who would want them? If you are more worried about insurgent operations and Piracy then LCS seems a good pick. Despite the critics that is still a relevant mission role.
Click to expand...

I guess my thoughts were that a number of navies had been picking up ex US coastguard ships, the LCS would be a better fit. I would imagine that once the LCS is fitted with the NSM it packs a better punch than say the Hamilton Class.

SRC Inc., has been awarded a $26M contract from the U.S. Army Contracting Command at Aberdeen Proving Ground, MD, to deliver AN/TPQ-50 radar systems. The AN/TPQ-50 has a flexible architecture allowing for quick adjustment to address the emerging Army capability needs for air surveillance and counterfire target acquisition. The next hospital ship could be the size of a ferry

Typically, hospital ships are large. The two currently in service, USNS Mercy (T-AH 19) and USNS Comfort (T-AH 20), are behemoths of the ocean, sporting designs based on supertankers.

Just how big are these vessels? According to
Please, Log in or Register to view URLs content!
the Mercy and Comfort are almost 900 feet long, displace 69,552 tons, and have over 1,000 beds for wounded troops. They were purchased and converted in the 1980s and one is based on each coast of the United States.

Jeff Head said:
While it would be GREAT to put an eight cell Mk-141 VLS on these ships with ESSM, even two of the eight cell luanchers would be worthwhile.

Add to that two Phalanx and two SeaRAM and you are in a position where they can have some chance with point defenses for whatever breaks through their escort.

there're indications (I've posted these links and the chart before) of the auxiliary fleet FALLING APART: 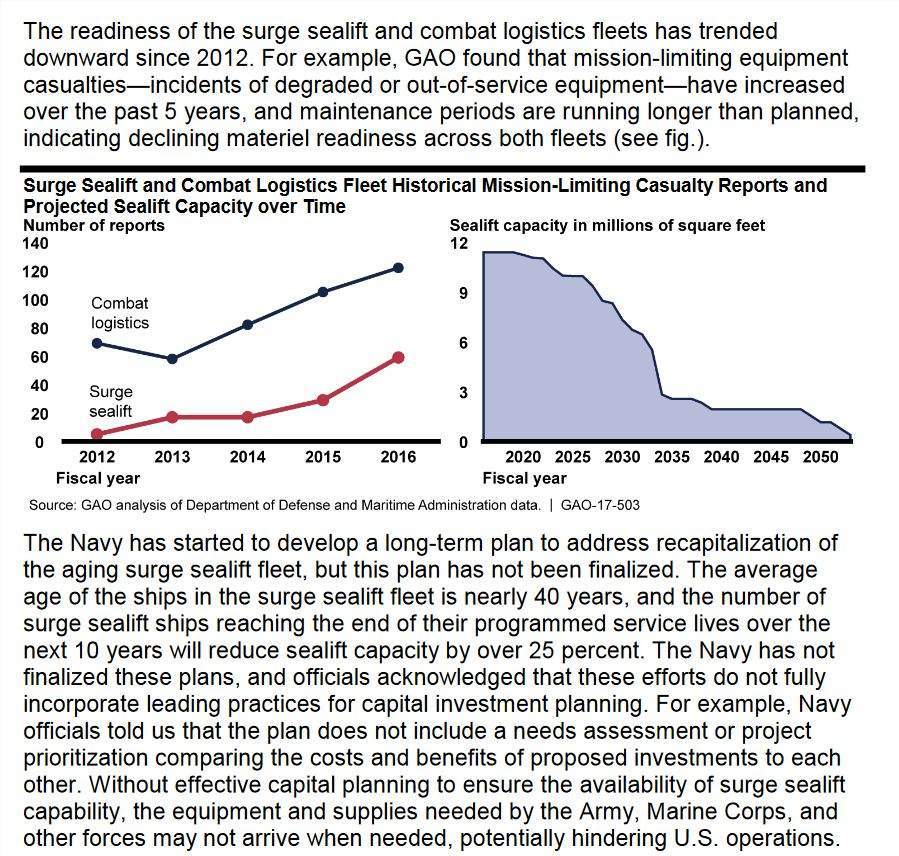 so, considering these indications, it's close to impossible the auxiliary fleet vessels would be getting the armament you envisioned;

now, even assuming the auxiliary fleet weren't falling apart (I can imagine you could say like 'it's GAO' or its my imagination), coupla points to consider:
I could go on in my comfortable chair

The vehicle combines high navigational accuracy, enhanced sonar resolution and precision manufacturing to provide defence, commercial and academic customers with detailed subsurface data collection capabilities. The system can be deployed and recovered from piers, rigid-hulled inflatable boats or other vessels of opportunity.

The Bluefin-9 includes a removable data storage module (RDSM) that stores high-definition images, video and sonar data that can be accessed within minutes of the vehicle's recovery. With the endurance of up to eight hours at a speed of 3kt, Bluefin-9 can reach speeds of 6kt and dive to 200m. Its modular design allows the user to exchange both the RDSM and battery to redeploy the Bluefin-9 in 30 minutes or less.

Central Lake Armor Express has received a $59.3 million contract to provide armor for the U.S. Marine Corps, as well as data reports on the armor inserts.

The firm-fixed-price, indefinite-delivery/indefinite-quantity contract, announced Friday by the Department of Defense, calls for Central Lake to produce more than 65,000 Plate Carrier Generation III - Soft Armor Inserts and data reports for the Marines.

The Marines and the Army collaborated to design the lightweight Generation III, after calls for lighter armor from commanders in 2016.

Work on the contract will be performed in Central Lake, Mich., and is expected to be complete by October 2023.

This contract was competitively procured after the Federal Business Opportunities received 13 offers.

The Marine Corps issued a $62 million contract in September to Vertical Protective Apparel, based in Shrewsbury, N.J., for more than 225,000 of the Plate Carrier Generation III armor systems.

The system is intended to offer increased mobility, lighter weight, a better fit and "additional modularity to support various types of missions."

The cost-plus-fixed-fee contract, announced on Friday by the Defense Department, for weapons systems aboard Ohio-class submarines is expected to be completed by Sept. 20, 2019.

Work on the contract will be conducted mostly in Rockville, Md., with the rest spread across Washington, D.C., Georgia, Washington, Virginia, California, New York and the United Kingdom, among other locations.

The Navy has obligated more than $1 million from fiscal 2019 Navy research and development test and evaluation funds, in addition to more than $8.4 million in U.K. funds. None of the funds will expire at the end of the current fiscal year.

stan hyd said:
I guess my thoughts were that a number of navies had been picking up ex US coastguard ships, the LCS would be a better fit. I would imagine that once the LCS is fitted with the NSM it packs a better punch than say the Hamilton Class.
Click to expand...

for several years I've been following the pricing of warships entering service and, believe it or not, one can get an ARMED Western craft for the price of UNARMED USN LCS (please don't give me now something about what's included in their so called Government-furnished equipment);

ARMED LCSs are, ehm, expensive (talking 'up-gunned Freedom variant' for the Saudis: six bil for four of these, now setting aside how real that deal actually is)

"On May 23, the U.S. Navy rolled out its 2018 budget request that included one littoral combat ship, or LCS. The logic was that since Congress had given the Navy three in fiscal year 2017, an additional one would keep both builders — Wisconsin-based Marinette Marine and Alabama-based Austal USA — afloat.

But inside the White House, alarm bells went off in some sectors. Peter Navarro, the head of U.S. President Donald Trump’s trade and industrial policy office, was looking at information indicating one ship could trigger layoffs at both shipyards. Those concerns were shared by senior Trump aides Rick Dearborn and Stephen Miller — both old hands of long-time Alabama Sen. Jeff Sessions — and together they lobbied and prevailed upon Office of Management and Budget Director Mick Mulvaney to add a second ship to the request."

Life support: The Navy's struggle to define a LCS bare minimum
Please, Log in or Register to view URLs content!
goes on below due to size limit
Click to expand...

Jura said:
now
Congress to buy 3 more LCS than the Navy needs, but gut funding for sensors that make them valuable
Please, Log in or Register to view URLs content!
:

"Congress loves buying
Please, Log in or Register to view URLs content!
, but when it comes to the packages of sensors and systems that make the ships useful, lawmakers have been less enthusiastic.


In the
Please, Log in or Register to view URLs content!
that just left the conference committee, lawmakers have funded a 33rd, 34th and 35th littoral combat ship, three more than the 32-ship requirement set by the Navy. But when it comes to the mission modules destined to make each ship either a mine sweeper, submarine hunter or small surface combatant, that funding has been slashed."

oh and for the SDF record, I posted
Jul 19, 2018
the USN may cancel FFG(X),
before the first indication appeared inside
Please, Log in or Register to view URLs content!

Huntington Ingalls has received a contract from the U.S. Navy for repairs on the USS O'Kane.

This availability will include a combination of maintenance, modernization and repair of USS O'Kane.

The $44.7 million firm-fixed-price contract, announced Friday by the Defense Department, could extend to $52 million if options on the deal are exercised.

Last week, the Navy extended the deployment of the USS O'Kane to support the 7th fleet in Japan, which is suffering a ship shortage due to the deadly collisions of the USS Fitzgerald and USS John S. McCain in 2017.

Upgrades to the vessel will revolve around reducing the ship's workload requirements and increasing war fighting capabilities while reducing total ownership cost to the Navy. Those improvements will include massive overhauls to combat systems, as well as hull, mechanical and electrical upgrades.

The Navy has obligated more than $44.7 million from fiscal 2019 operations and maintenance, fiscal 2019 other procurement and working capital fund funding for work on the O'Kane, with $35.1 million set to expire at the end of the current fiscal year.

Work will take place in California and is expected to be completed by January 2020.