Russians are getting rid off tools what aren't useful anymore and if I was a local "commander" i'd run away.

Please, Log in or Register to view URLs content!
more then fifty thousand people came to mourn "Motorola" from https://www.sinodefenceforum.com/uk...s-reports-data-etc.t7103/page-137#post-420021 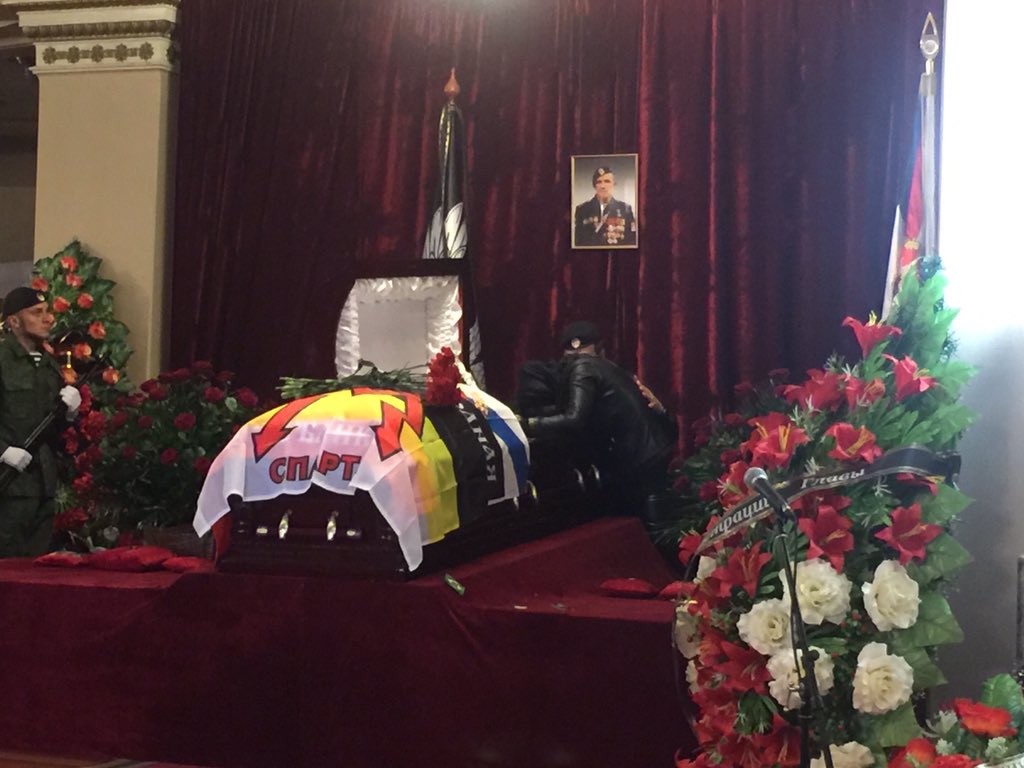 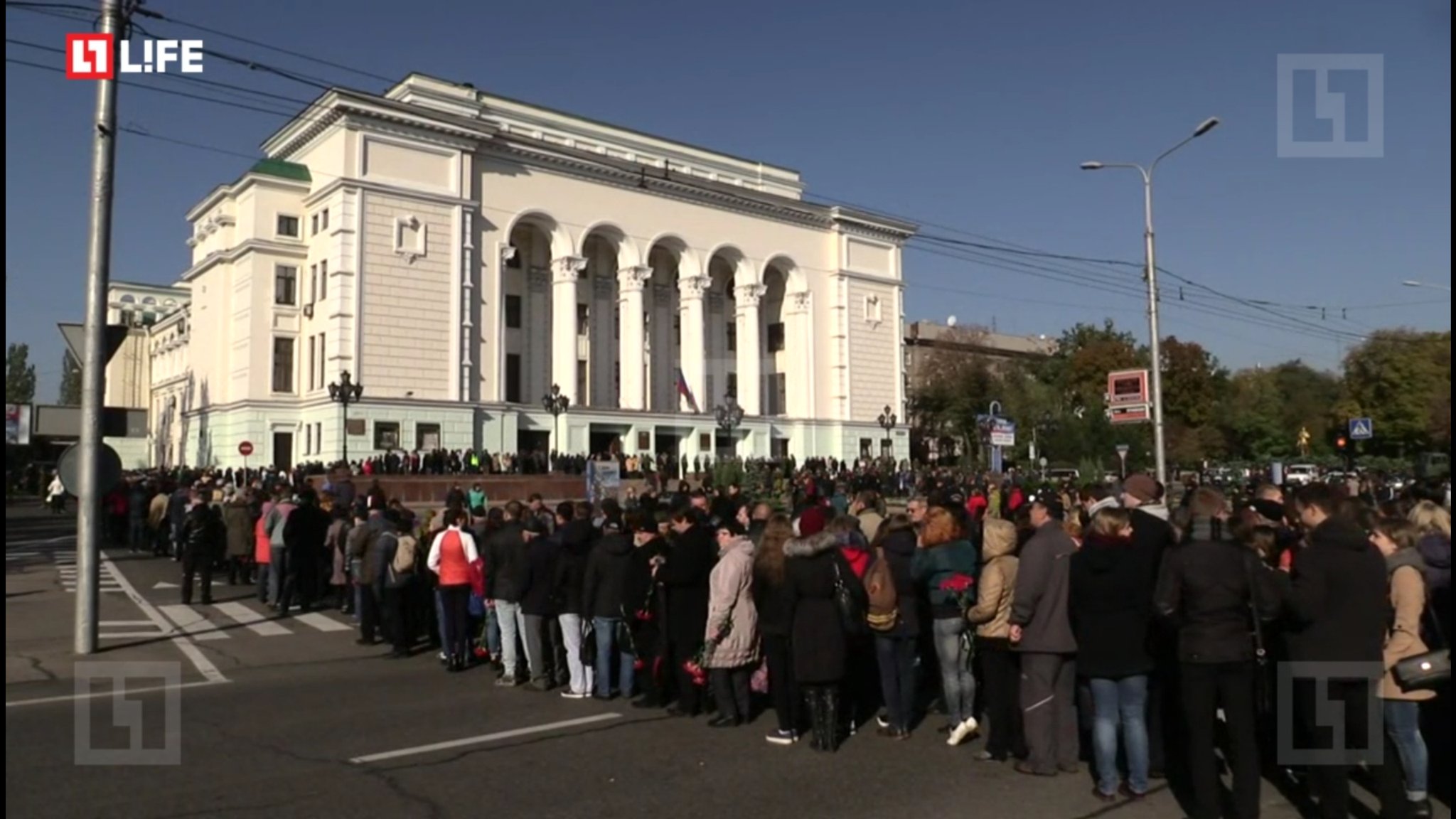 ​
(it's the building of
Please, Log in or Register to view URLs content!
and just to make it clear: this is not a funeral)​

wow "The Kremlin Welcomes The Armed OBSE Mission Into Donbass"

Please, Log in or Register to view URLs content!
said about the outcome of the meeting in Berlin the day before ... soon there will be an article in English available OK maybe it has been already but I have to go now)

From the South West of Ukraine:
My Dutch newspaper has an article today saying that the former president of Georgia, Saakashvili, has resigned as governor of Odessa because of a quarrel with Poroshenko about corruption.

Russians Used Cyber Bots to Target Ukrainian Artillery
Cyber security analysts claim the spying bots were pinpointed at Ukraine Army artillery units that have suffered significant losses from Russian supported separatists in the past two years. The same group used these bots to target the US Democratic Committee in June 2016.
Click to expand...

Please, Log in or Register to view URLs content!
The Gist of it. Some Ukrainian Forces may have been using An Android based App on Commercial Android Smartphones designed to Assist in Aiming D30 122mm Howitzers. This app however is believed to have a hidden trojan added to it. this trojan feed locational and communications data. IE Targeting and C4I. In the Conflict 80% of the Ukrainian D30 units were lost and 50% of their overall Artillery. This is why COTS procurement of digital systems is risky and larger militaries that can afford it have modifications made to COTS Smart devices and there own unique APPS and OS.

Mr Tillerson is an excellent politician.

President-elect Donald Trump’s pick for secretary of state, Rex Tillerson, offered tough talk on Russia on Wednesday, saying it “poses a danger” to the US and that he would have backed a military response to Russia’s annexation of Crimea.

The pragmatic but muscular stance seemed to put Tillerson at odds with the president-elect, who has repeatedly said he wants deeper ties between Washington and Moscow. The former Exxon Mobile CEO’s comments also suggested a transactional relationship with Russia and other rival nations, which is in line with Trump’s foreign policy pronouncements.

“We have to move Russia from being an adversary always to a partner at times, and on other issues, we’re going to be adversaries,” Tillerson said. He suggested Russia might get a reset from the US, saying he recommends the new administration “leave things at the status quo to convey that this could go either way.”

At his Senate Foreign Relations confirmation hearing Wednesday, Tillerson stopped short of affirming Russian military actions in Syria made Russian President Vladimir Putin a “war criminal,” but said if shown evidence, he would consider the designation. He called an intelligence report alleging Russia interfered in US elections “clearly troubling.”

Simultaneously with the hearing, Trump held a press conference in New York in which he acknowledged Russia was behind efforts to sway the election against Trump’s Democratic opponent, Hillary Clinton. Asked his feelings on a US candidate working with a foreign power against another candidate, Tillerson told lawmakers, “That would not comport with our democratic process.”

Democratic and Republican senators grilled Tillerson about his ties to Russia and Putin, who awarded him the Order of Friendship in 2013. Tillerson worked to assure them of his independence and that he was capable of setting aside his priorities as Exxon Mobil CEO to represent the American people on the world stage.

One revelation, that Tillerson had not discussed his Russia views with Trump, came in an exchange with Sen. Bob Menendez, D-N.J.

“I assume, to some degree, that you had some discussion about what it is that [Trump’s] world view is going to be in order to understand whether you would be willing to execute that on behalf of the person you are going to work for,” Menendez said.

Tillerson and Trump had only spoken “in a broad construct and in terms of the principals that are going to guide,” he said.

By and large, Tillerson argued the US need to reassert its leadership on the world stage to earn back the trust and respect of its shaken allies. Tillerson affirmed NATO’s mutual defense provision was unbreakable and said— contrary to Trump’s assertions during the campaign — he would not recommend breaking with allies to pressure them into more defense spending.

In an exchange with Sen. Rob Portman, R-Wis., Tillerson said Russia’s aggressive behavior serves its goal of re-establishing its supremacy in the world order. Tillerson argued his time spent in Russia gave him the understanding that “there is scope to bring down the temperature around the conflicts we have today.”

“The important conversation we have to have with them is does Russia now and forever want to be an adversary of the United States; Do you want this to get worse or do you want a different relationship,” Tillerson said. “We’re not likely to ever be friends. Our values are starkly different.”

When he was asked whether Russia has a legal claim to Crimea, his response was a swift “no.” He argued the US had a weak response to Russia’s annexation in 2014, which inadvertently encouraged Russia to advance into eastern Ukraine, “the next illegal action."

His response, he said, would have been to recommend Ukraine mass forces on the eastern border, arm those forces with defensive lethal weapons, share intelligence with them and call on NATO to provide air surveillance.

“The absence of a very firm and forcible response to Crimea was judged by the leadership in Russia as a weak response,” Tillerson said, adding: “I think what Russia would have understood is strong response, that yes, you took Crimea, but this stops right here.”

The Obama administration favored a diplomatic solution and sent some lethal and nonlethal aid, but the counter-argument is it would have spurred Russia to arm separatists equivalently and strengthened Russia's claims the West was trying to weaken it.

“This new administration must thread the needle between pushing back against Vladimir Putin’s aggressions, meddling, interventionism and bullying and at the same time stop a dangerous downward spiral in our relationship with Russia,” Gates said.
Click to expand... 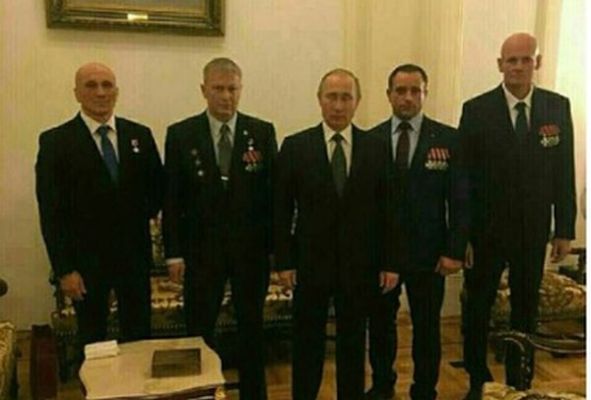 to the left from Mr. Putin (to the right in the above picture);
understandably,
Please, Log in or Register to view URLs content!
explained Mr. Putin was taking pictures on the sidelines with numerous visitors, of course:

gosh what does it take to do to get all those medals while being a contractor??
You must log in or register to reply here.