delft said:
From
China has practiced bombing runs targeting Guam, US says
13 hours ago
Please, Log in or Register to view URLs content!
Click to expand...

LOL now I have to say also here delft was right, and there had been a ludicrous statement in the original version of that article, as explained in
China's SCS Strategy Thread 5 minutes ago

understandably,
GMB: UK should not open FSS construction to foreign shipbuilders
Please, Log in or Register to view URLs content!

UK worker union GMB has slammed the UK government’s decision to put up an international tender for the construction of three Royal Fleet Auxiliary vessels, saying the decision “udermined the national interest”.

The union further said that all Royal Navy and RFA ships should be built domestically and has called for cross-parliamentary support of MPs as well as shipbuilding employers to join workers and their communities and demand “an end to this tragic missed opportunity for UK shipbuilding”.

The ships in question are the 40,000-ton fleet solid support ships which will be supplying UK aircraft carriers and other frontline warships with ammunition, food and spares.

The four tankers which will be supplying the Royal Navy fleet with fuel are built in South Korea and outfitted in the UK.

GMB says all Royal Navy and Royal Fleet Auxiliary vessels must be built in UK yards.

The union is calling for cross-parliamentary support of MPs as well as shipbuilding employers to join workers and their communities and demand an end to this tragic missed opportunity for UK shipbuilding.

“The RFA contracts are the key to unlocking the country’s massive shipbuilding potential and transforming the fortunes of our shipbuilding communities,” Jude Brimble, GMB National Secretary, said.

“But Ministers’ refusal to put the UK’s interests first will mean that instead of a massive programme of shared economic and employment re-distribution, our shipbuilding firms will be competing against each other for slivers of complex warship work.”

The UK defense ministry has initiated an assessment phase to acquire the three MARS fleet solid support ships and under current plans has targeted main contract award by 2020.
Click to expand...

A series of live firings of the Brimstone precision strike missile from a Eurofighter Typhoon have been completed successfully.

The trials, conducted from BAE Systems’ Military Air & Information at Warton, Lancashire, UK, form part of a programme of new enhancements which will be rolled out across the Royal Air Force.

Brimstone will provide Typhoon with a low collateral, pin-point accurate air-to-surface weapon. Planning for the next stages of work on Brimstone – including evaluation by the RAF in mid-2018 – is now underway ahead of its entry into service.

“To complete this milestone is testament to the expertise and dedication of our people and the value of working closely with our partners.”

“Brimstone will add a low-collateral, high precision strike capability and ensure Typhoon remains fit to meet the threats of the future for decades to come.”

Brimstone is part of the Phase 3 Enhancement (P3E) package which also includes mission system and sensor upgrades. P3E is the final part of Project Centurion – the programme to ensure a smooth transition of Tornado GR4 capabilities on to Typhoon for the RAF.

In total nine firings and nine jettison trials, which began in July, have been completed, with support from the Ministry of Defence, MBDA, QinetiQ, Eurofighter GmbH and the Eurofighter Partner Companies – Airbus and Leonardo.

The aim of the trials was to provide weapons integration clearance for operational use. They covered a range of specific release scenarios, testing at various heights, speeds, levels of G-force and in different positions on the aircraft wing and in the launcher. The nine firings have also been used to perform data analysis and models of the weapon’s performance. Further flight trials will take place in early 2018, followed by operational evaluation by the RAF.

Operational evaluation of the Phase 2 Enhancement (P2E) package with the with RAF’s 41(R) Squadron – the Test and Evaluation Squadron – at RAF Coningsby, Lincolnshire, UK, is continuing and will include live firings ahead of roll out to the UK fleet. The P2E package includes MBDA’s Meteor Beyond Visual Range air-to-air missile and the Storm Shadow deep strike stand-off air-to-surface missile.
Click to expand...

now I skimmed over the blog post (dated
1 November 2017
)
Eating Your Own - Cannibalisation in the Royal Navy
Please, Log in or Register to view URLs content!

the blogger sounded like a typical fanboi, 'things are actually great' no matter what's happened, as in

"The RN, rather than pointing out that the need to keep ships at sea ready to fight tonight means sometimes taking risk, instead seems to have meekly rolled over. Once again, a chance to secure an easy PR win by showing how busy the RN is, what good work it is doing for the public around the globe 24/7/365, and noting that yes, sometimes things break or need replacing, but isn’t the RN doing a bloody good job, has been lost."

Hi HMS Portland mothballed in Devonport. Not long ago best ASW ship in RN. Will she survive coming cuts or be refitted for further service?
---
she won't survive

The best pics of the QE so far IMHO...with the HMS Dragon right there playing home plate for her.

A CSG made up of a QE class carrier, two Type 045s and two Type 23s (later the new Type 026s) accompanied by one or more Astute SSNs will be among the most power CSGs in the world.

I am looking forward to the day that we see a QE class with at least 24 F-35s accompanied by its full group with two Type 45s, two Type 23s, and an SSN.

Very modern vessels all, and all very capable.

A US Group with one Tico, two Burkes, and two of the up armed Freedom class or the new FFGs, accompanied by one or more Virginia class SSNs would be stronger because of the much higher defensive missile count and the larger and more diverse air wing and their Hawkeyes.

In this regard, the French group probably also excels because of its Hawkeyes and Rafaels...but they simply do not have enough Forbin class DDGs...they would hardly ever have both of them with the carrier, and so you would see one Horizon class DDG, two FREMMs, and a sub in terms of very modern vessels with the carrier.

I believe the overall UK group will be stronger.

The US, again because of its much higher defensive missile count and airwing is still far and away the strongest.

Hi HMS Portland mothballed in Devonport. Not long ago best ASW ship in RN. Will she survive coming cuts or be refitted for further service?
---
she won't survive
Click to expand...

The Portland is not about to be mothballed or deommissioned.

She completed the major overhaul to her systems in 2012 over a 50 week period that saw her her upgrade to Sonar 2087, get all new IT systems, overhaul and upgrade her missiles, Sea Wolf mid-life overhaul, gun replacements, refurbish her galley, and get significant improvements to her accommodations.

Right now I believe she is slated to be decommissioned in 2034 and replaced at that time by one of the new Type 26 FFGs. At least that is the current plan.

Jura said:
now I skimmed over the blog post (dated
1 November 2017
)
Eating Your Own - Cannibalisation in the Royal Navy
Please, Log in or Register to view URLs content!

... while now:
Royal Navy parts cannibalisation – a concern or a crisis? November 6, 2017
Please, Log in or Register to view URLs content!

the last paragraph is
Strength in depth
If resolving the manpower shortage is the RN’s most serious problem, the next priority must be increasing stocks of spare parts, portable equipment, ammunition and missiles. This is another symptom of a ‘peacetime mindset’ that would quickly be exposed if the RN had to fight in a real conflict. We need a new emphasis on contingency planning, strength in depth and resilience both in manpower and logistics, even if it comes at the expense of new kit. Unfortunately with
Please, Log in or Register to view URLs content!
and “efficiencies” on the way it seems unlikely that the hollowing out of the RN is likely to be reversed anytime soon. Expenditure on mundane behind-the-scenes activity may not get the headlines but is the difference between a showpiece navy and a credible fighting fleet. 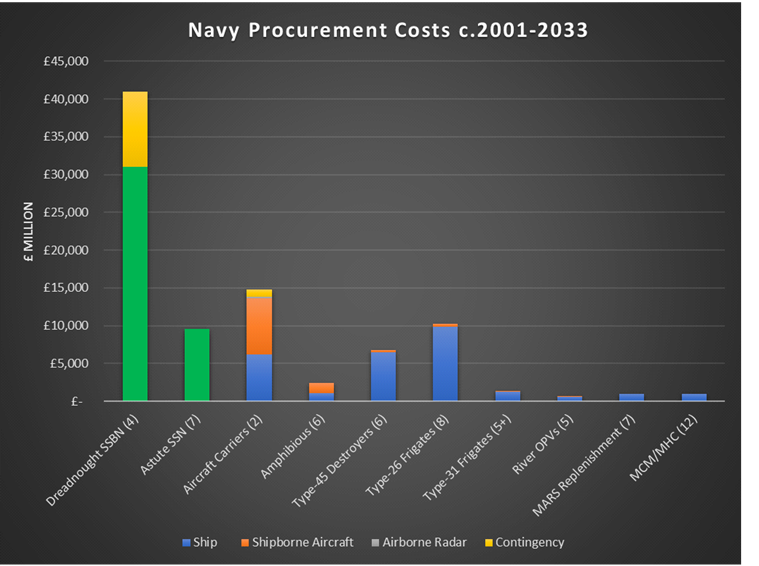 Yes they are very complex, but why are 4 SSBNs going to cost around 4 x that of 7 Astute class submarines? chart via
Please, Log in or Register to view URLs content!
You must log in or register to reply here.