Drones will play role in any Taiwan conflict: Turkey's Baykar​ 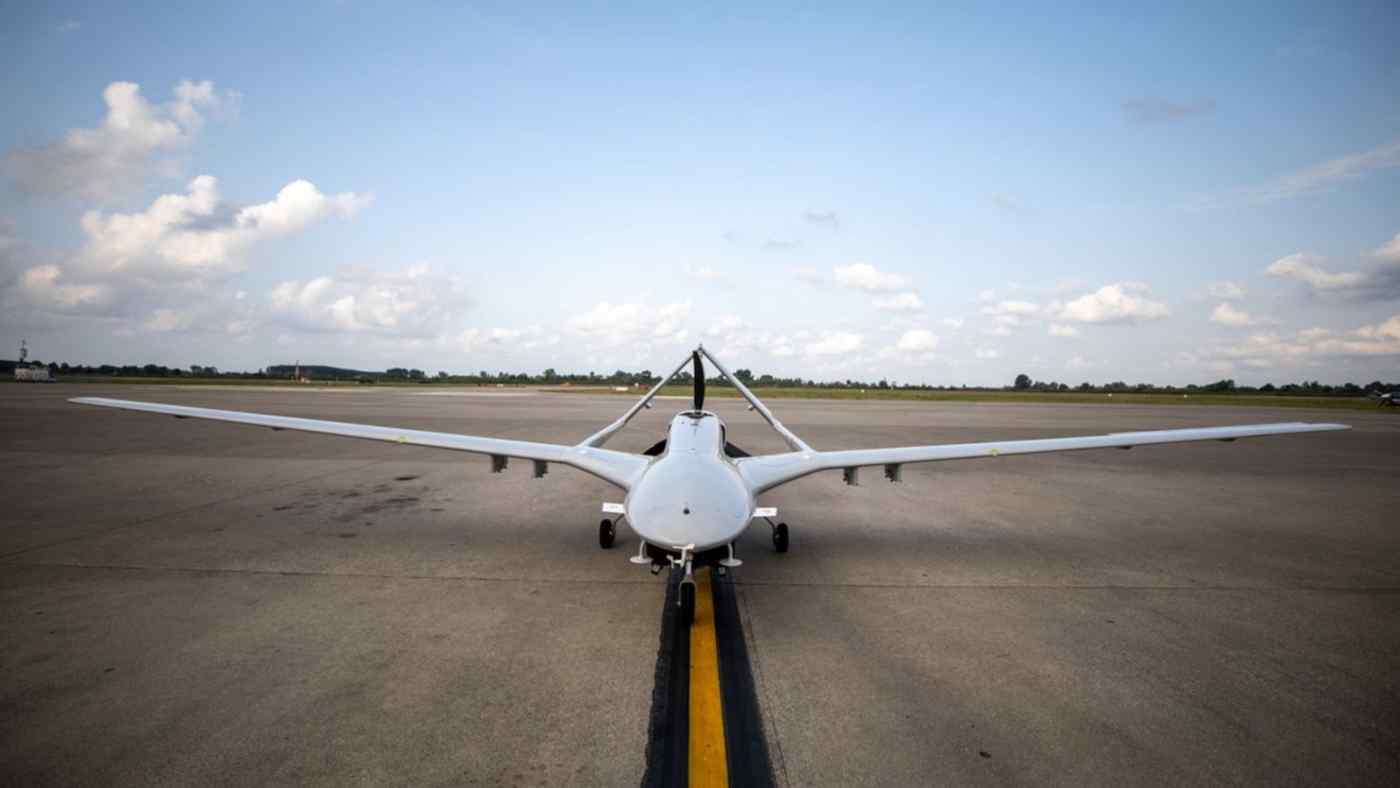 
SAMSUN, Turkey -- Armed drones will play a crucial role in all future conflicts, including a potential war in the Taiwan Strait, the head of Turkey's top armed drone manufacturer told Nikkei Asia.

Asked in an interview if armed drones can play a role at a potential conflict between China and Taiwan, Baykar Technology CEO Haluk Bayraktar said: "It is now out of question to have a war without drones" and those who do not harness the power of drones will be on the losing side of future conflicts.
Baykar's TB2 drones have proved effective in the Ukrainian war, allowing Ukraine's armed forces to fend off Russia's advance toward the capital, Kyiv. Video footage of the drones hitting Russian tanks, vehicles and missile defense systems have been widely shared on YouTube.
Speaking on the sidelines of Teknofest, Turkey's largest aviation, aerospace and technology show, Bayraktar said the drones are also effective at sea, pointing to successful missions in the Black Sea. "TB2 drones serving the Ukraine Navy destroyed several Russian naval assets going at fast speed. No other weapon can hit those with such precision strike," he said.
"In fact, drones are more effective at finding targets at sea compared to land because there is more contrast," he said, explaining that it is easier for a drone to spot a target in an environment that consists of only water and the object. 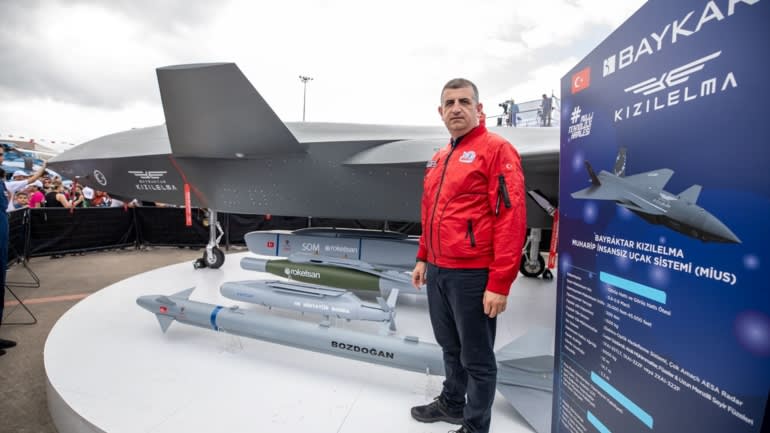 Baykar Technology CEO Haluk Bayraktar poses in front of a prototype of the company's new drone, the Kizilelma, at Teknofest in Samsun, Turkey on Aug. 31. (Photo by Cevahir Bugu)

Bayraktar said that Baykar is now in the process of mounting anti-ship cruise missiles on its advanced Akinci (raider) drones.

Regarding drone use in a potential Taiwan contingency, he said his company has not had any contact with the island regarding drone sales. But he said that China is a "global drone producer," and that he is watching news reports about Beijing's aggressive use of drones.
"Drone technologies are a must-have for all warfare now and in the future. They are sine qua non and the ones not using them will be on the losing side," he said.
Turkish-made drones are thought to have played a role in the sinking of the missile cruiser Moskva, the flagship of Russia's Black Sea Fleet, in April. The Moskva was hit by two Ukrainian Neptune missiles, but a senior Ukrainian official told Nikkei that month that it had received assistance from "different equipment."
While details of the attack have not been released, analysts say that a TB2 may have diverted the Moskva's defenses by flying above it, or could have been used to spot the exact location of the cruiser, enabling precision strikes against it.
Bayraktar refused to confirm, but added with a smile: "That's what we read in the media."
TB2 drones also successfully targeted Russian patrol boats, landing ships and a tugboat near Snake Island, preventing the Russians from establishing a major foothold in the area.
The company has been steadfast in supporting Ukraine, with Bayraktar personally declaring in interviews that he will never sell drones to Russia. Baykar has donated several drones in response to international crowdfunding efforts organized in countries such as Poland and Lithuania.
The CEO said Baykar has so far signed export agreements for drones with 23 countries. These include four countries in Asia, which are thought to be Azerbaijan, Turkmenistan, Pakistan and Kyrgyzstan. Baykar drones are now the world's top seller, he said, noting that the company's client list has surpassed the number of countries that all Chinese manufacturers have exported to combined.
Different variants of Chinese armed drones such as Wing Loong and Rainbow CH have been exported to countries including Saudi Arabia, the United Arab Emirates, Pakistan, Turkmenistan and Ethiopia, according to international defense industry blog Oryx.
The U.S. which has the most cutting-edge drone technology, has exported its armed drones to only a few countries, including the U.K., France, Italy and Spain.
Baykar's rapid growth has captured the attention of military watchers around the world. Its first drone export deal with Qatar was only signed in 2018. The company has also sold the more advanced Akinci drone to four countries, including Azerbaijan and Pakistan.
The CEO said the company is currently in negotiations with around 10 countries for the TB2 and five or six for the Akinci.
Asked if Baykar would consider selling drones to Pakistan's rival India, Bayraktar responded in the negative. "As a company principle, we are against 'war profiteering,' or selling arms to both sides in conflict," he said. "Our priority is to share our capabilities with brotherly countries that we have strategic relations [with], friends, allies, NATO members. Countries like Azerbaijan, Pakistan, Ukraine are our priority."
One sign of the quality of Turkish drones is that countries that previously bought drones from other producers have turned to Turkey to replace them.
Bayraktar said that several of his company's clients previously acquired armed drones from China but "retired" them once TB2 drones entered the force.
"Our smart munitions have better precision strike capabilities, ability to fire from higher altitudes, better autonomous flight performance including takeoff and landing, as well as usage within a network with high flexibility," he said, despite prices being in the same ballpark. Baykar's TB2 drone is on display at Teknofest in Samsun, Turkey on Aug. 31. The attack drone proved effective in the Ukraine war. (Photo by Cevahir Bugu)


Bayraktar revealed that he had heard from an official of a country that had purchased Chinese drones that the devices turned in the opposite direction once they approached the Chinese border. The official suspected that the drones were fitted with software that prevents them from approaching Chinese airspace.

Such hidden limitations, if true, are "completely unacceptable," Bayraktar said.
Conflict analyst Stijn Mitzer, one of Oryx's authors, said Turkmenistan was not happy with armed drones acquired from China and ended up buying TB2s. "Ethiopia also was not happy with its Iranian armed drones and later purchased both Chinese as well as Bayraktar TB2s, but ended up only being satisfied with TB2."
Pakistan's acquisition of TB2 drones comes after it purchased a large number of Chinese made drones, Mitzer noted. "I have no information that suggests Pakistan is unhappy with their Chinese armed drones, but one could argue that if they were happy there was no need to buy another platform."
Bayraktar said 98% of the company's revenue this year will be generated from exports, amounting to "well above a billion dollars" for the first time.
At Teknofest, Baykar unveiled a prototype of its next-generation drone, the Kizilelma ("red apple"), its first jet-engine drone, which comes with low radar visibility and the ability to perform short takeoff and landing (STOL) on several naval platforms.
Bayraktar said that short takeoff and landing capability will be increasingly important for navies around the world. "Naval warfare is getting more important across the globe as a trend." 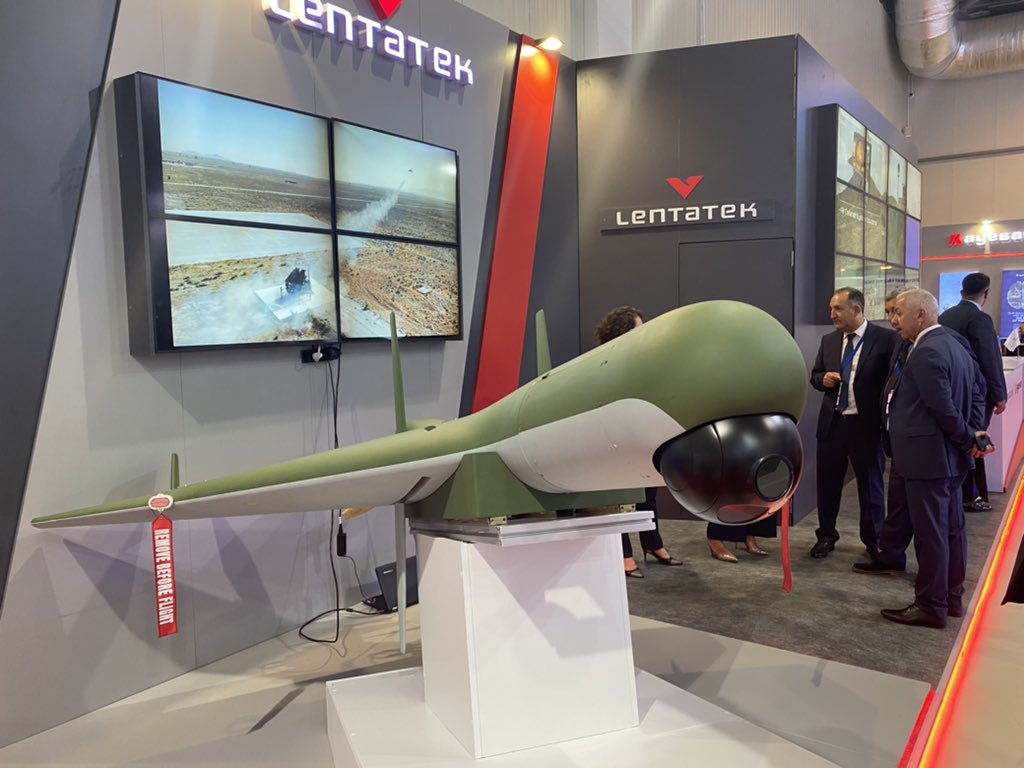 Registered Member
Serbia wants to buy TB2's but needs to wait for its turn according to Serbian president Vucic.

Registered Member
Rumors are that the UAE is interested in 120 TB2's plus ammo and training and such for almost $2 billion.

Another rumor is that they're also interested in 60 Akinci's.

Again these are rumors.


Please, Log in or Register to view URLs content!
EDIT: know I know why the CEO said that they are planning to produce 500 TB2's next year.
Last edited: Sep 8, 2022

Registered Member
"We have completed our Passive Exoskeleton Project, which makes our soldier's load of up to 40 kg feel 80% light with minimal impact on his maneuvering ability.

We gave the first prototypes of the system developed by Interact to our security forces. After field feedback, we start deliveries."