The War in the Ukraine

SolarWarden said:
Crew survived and tank likely got repaired like many Abrams that got hit in ammo storage. All Russian T-series turrets pop like zits when their ammo gets hit.

Some Abrams go back into service some may be too damage to fix but at least the crew survives.
Click to expand...

Delusional. The atgm penetrated inside which causes the crew compartment to super heat into the temperatures required to cook off everything inside the tank.

The crew could only survive if it is a handheld older rpg type weapon which isn't supposed to deal with modern tanks.

If the turret flies off or not mostly comes down to how heavy the projectile used to hit the tank was.

A weak point hit by the likes of Kornet or Hellfire will generally cause that more often than not.

Whereas a hit on weak points with lighter weapons will disable the tank with less major damage, so the crew can survive.

Abrams from the video had 0 survivors. Abrams from the above quoted still images probably had surviving crew. The major difference is what they were hit by.
Last edited by a moderator: Wednesday at 8:52 AM

Registered Member
T-72 designers know getting hit and penetrated by heavy NATO missiles has low survival chance which is why blow out panel werent a thing. They instead made sure ammo must be in hull not turret to minimize ammo detonation.
P

Chevalier said:
We've seen the Abrams in action and the results are wanting:

Any clips of Abrams taking ATGM hits on the frontal arc/angles?

I don't think there is any tank present without APS right now that'll eat a rear hit.
L

sheogorath said:
The worse of the lot will certainly be the Challenger 2, with ammo being stored all over the fighting comparment
Click to expand...

Incorrect as it's combat record will testify to.

The amunition and propellant are kept seperately in water filled compartments. It also uses propellant that smolders slowly and wont flash the entire crew.

This photo was taken after an onboard explosion during training. 1 crew killed, the rest survived. 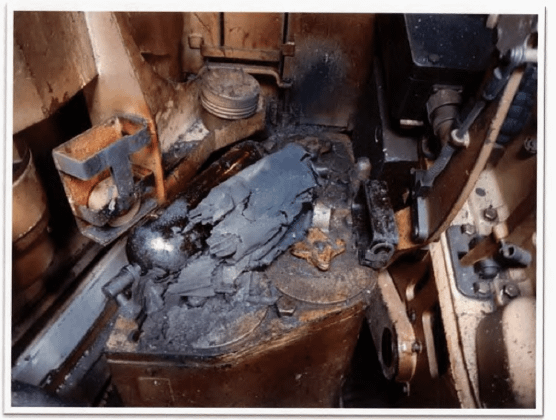 HighGround said:
I mean the funny thing is, I remember back in Summer when RuAF captured Liman, Podolyaka was claiming that Russian commanders "learned" to capture large or strategic settlements.

You surround the city from 3 sides, take out all of the tactically salient buildings (like multi-story buildings) and then seize the high ground of any given city first. The result is that the resulting tactical disadvantage will force the enemy to retreat and you can take pot shots at the retreating columns in peace while seizing the settlement.

The last offensive on Uhledar this Winter didn't really showcase any of those "lessons". The grinding advanced through Pavlivka just emphasized how tactically and operationally poor the Russian military can be.
Click to expand...

Thats because the strategy has changed from taking ground to attrition the AFU.

The previous strategy resulted in quicker map progress where they managed to capture territory fairly quickly, but also allowed the AFU to retain the lion share of their troops and equipment from abandoned positions.

As the Russians learnt to their cost, that just meant they faced more defenders at the next objective and also allowed the AFU to accumulate sufficient reserves of man and material to launch their own offensives. And the Russians belatedly realised that with their own manpower deficiencies but (inaccurate) firepower dominance, attacking fixed positions works out far better for them than defending, especially against mass tactical spam Zerg rushes across open territory where the AFU can just rush through their fire zones without taking crippling losses due to how inaccurate most Russian firepower is.

So now the objective is not to take territory as fast as possible but rather to find choice locations to bait the AFU into pouring as much men and materials into defending as possible while the Russians grind them to meat paste with area bombardment.

The attacks are spearheaded by Wagner penal legions for the Russians, so it’s a very good trade for them as they are trading their own disposable forces with dubious combat effectiveness for some of the best of the AFU.

tankphobia said:
On paper both the EU and US have a massive industrial base, even the car companies alone have enough expertise, workforce and equipment between them to quickly pivot to military production.

Politically that won't happen because they are not at war with Russia and cannot simply commandeer civilian enterprise for military use. Furthermore even if they did, with the complexity of modern military equipment by the time they actually rolling out tanks and missiles for Ukraine it'll probably be too late.

What they CAN do is empty out decades of warehouseed equipment then increase their military budget for the next 10 years to refill the stockpile, which some EU states are already doing.
Click to expand...

Emptying armouries to supply Ukraine now and restock over the coming decades only works if you don’t plan on getting involved in any other wars in those years and decades, which clearly doesn’t apply to the US as it seems hell bent on starting a hot war with China as soon as possible, only it keeps flip flopping about actually making the call to do so.
S

broadsword said:
Will the Abrams to be sent to Ukraine be equipped with DU armor? I understand that was not the case for those sold to Saudi Arabia.
Click to expand...


lucretius said:
The amunition and propellant are kept seperately in water filled compartments. It also uses propellant that smolders slowly and wont flash the entire crew.
Click to expand...

The Challenger 2 no longer has wet racks, while the Challenger 1 did. As for its combat record, it includes an ammo cook-off after being hit by another Challenger which is a combat situation unlike your training accident

Registered Member
I am sorry, but these guys are serious about bloating with the Abrams turret racks as the ultimate and extreme advantage of the tank ?

The turet of the Abrams huge and tall.

Has three times higher chance to hit the turet compared to the T-72, but the later has way better survavibility than the Abrams.

The Soviet tank has the ammo low to the ground, means the enemy has to be in upper position OR the tank need to be in clear, full silhouette to get a hit in the armor rack from side/back.

Now, in the case of Abrams it will will get a hit in the ammo from 200-220 degree angle in any position, and a hit to the ammo will means instant mission kill in good case, in bad case the tank will stand without weapon in the middle of frontline.


Not a huge issue if your enemy using RPGs and pickups, but agains a peer enemy what will happens ? a T-72 just drive to the M1 and hit it from 2 meters ,as many times as she wish.

Means if a T-72 get a hit from the side of the turet it has a good chance to survive, the Abrams most likelly will be left with a single shoot in the main gun, afterwards the other tank can do whatever wish with it.
B


That's not an Abrams. Cope harder.


And you're the Russian mouthpiece, right?

Lol. You just made that up, huh? How about you post a source that Abrams crew on that video died.
Click to expand...

There are not many pictures of Abrams fighting high tech enemies. Most disabled ones were by ISIS using RPGs or frontal hit with old atgms which will not produce as spectacular results. Leopard 2 at least faced Syrian government equipped paramilitaries with Kornet and HJ-8.

You can't find a single picture of a Type 99A with its turret blown off, doesn't mean a hit from Hellfire on its ass wouldn't cause that.

Besides, what tank is it that you're clamoring for Ukraine to get anyways? Wasn't it... Leopard 2?

lucretius said:
Incorrect as it's combat record will testify to.

The amunition and propellant are kept seperately in water filled compartments. It also uses propellant that smolders slowly and wont flash the entire crew.

This photo was taken after an onboard explosion during training. 1 crew killed, the rest survived.
Click to expand...

There's no such thing.

Showing a photo with no context is meaningless. It's like showing a video of a Javelin hitting a T-72 and not disabling it and claiming that T-72s are immune to ATGMs.
You must log in or register to reply here.