Faustshadowdancer said:
Tbh I wouldn't be too surprised if Indonesia beats India's GDP. ASEAN appears to be much more dynamic than India is.
Click to expand...

They are more dynamic because they are only developing, while India is already a
(un-)developed hyperpower, Jai Hind 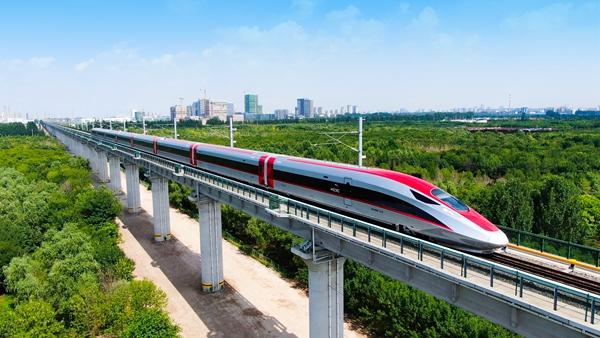 Bullet trains tailored for the high-speed railway network linking the Indonesian capital, Jakarta, and the city of Bandung are unveiled in Qingdao, East China's Shandong province, on Aug 5, 2022. [Photo provided to chinadaily.com.cn]

Bullet trains tailored for the high-speed railway network linking the Indonesian capital, Jakarta, and the city of Bandung were unveiled on Friday in eastern China, marking an important milestone of the project and preparing for the line's scheduled opening, China Railway International said.

A total of 11 sets of bullet trains and an inspection train, all adopting Chinese standards, were showcased in Qingdao, Shandong province. They will be shipped to Indonesia soon.

According to China Railway International, a subsidiary of China State Railway Group, which is overseeing the project, the trains, designed and developed by CRRC Qingdao Sifang Co, Ltd, are based on advanced and mature technologies of China-made Fuxing bullet trains which operate at the speed of 350 km per hour. The CRRC has also made changes to adapt to local environment and routes, as well as incorporating Indonesian culture elements to give passengers more comfortable traveling experience.

The 243-kilometer-line, a landmark project of the China-proposed Belt and Road Initiative, began construction in 2018 and is expected to open to traffic in June next year.

With trains capable of reaching speeds of up to 350 km per hour, the line will cut the journey between Jakarta and the capital of Indonesia's West Java province from over three hours to just 40 minutes.
You must log in or register to reply here.