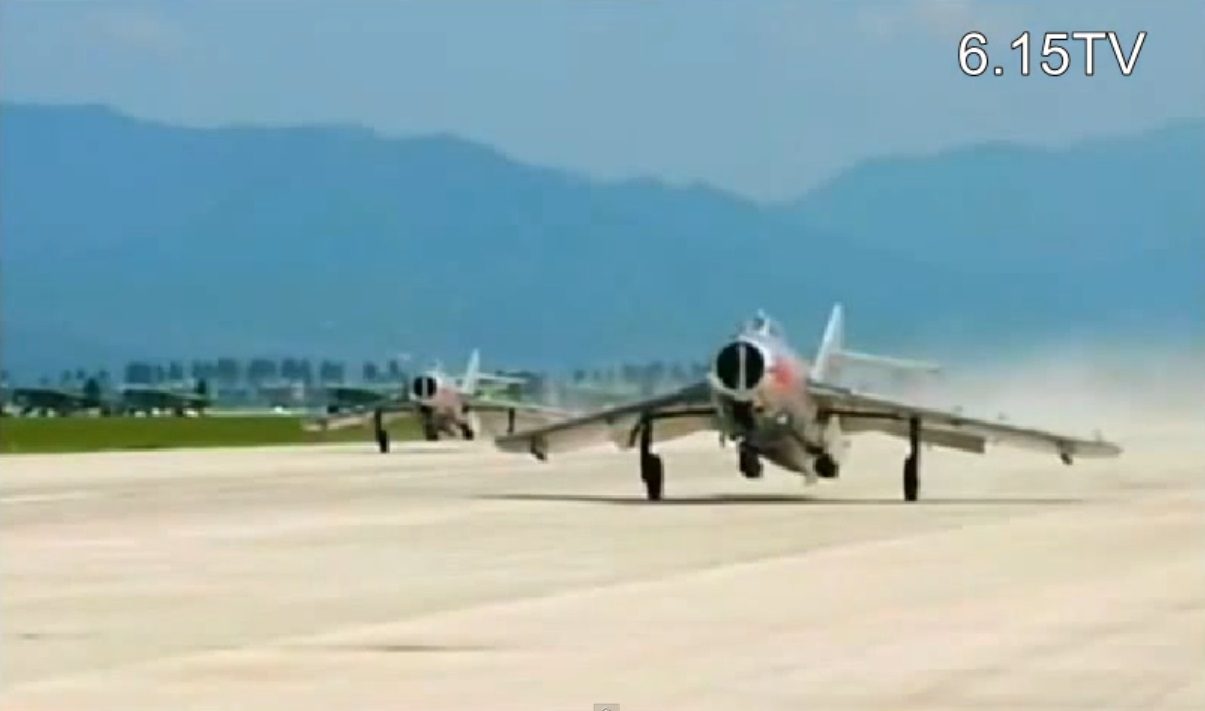 Registered Member
other 3 Mig-15 with hard points for bombs connected to the fuselage, yes !! North Koreans have implemented this additional capacity on the majority of this old model aircraft.

English, this is a English Language Forum.
S

Registered Member
It seems that the North Koreans as well as carrying out the new color camouflage, have updating of the cockpit Mig-29
in this frame extrapolated from the video, indicated with the arrow, there seems to be an LCD screen

The most Advanced fighter class aircraft in the Korean People's army Air forces are the Su 25, Mig 29 and Mig 23.
Of these three types The Mig 29 is the most capable on paper. however it's also the fewest. The KPAA suposedly received 35 units from Russia,But I have also seen numbers as low as 17 with 2 having crashed and it's likely due to lack of reliable spare parts and fuel access that atleast half of these are grounded used for spare parts or spare planes.
It's highly likely that the North Koreans have done everything in there power to smuggle, reverse engineer and devise means of maintaining these fighters much like how the Iranians have there kept F14s flying. that may include installing GPS systems or terminals meant for other more civil aircraft. I also won't put it past the KPAA to show off mockups in non flyable aircraft to for propaganda, It's an old tactic to maintain dummies on air strips to make an adversary think you have more fighters then you have.
due to their low numbers the Mig 29 seem to operate as a pride of place fighter with 4 operating as Quick reaction aircraft on standby.
The more likely to be encountered advanced fighter of the KPAA is the Mig 23ML This is a swing wing Interceptor roughly equal to the F4 Phantom, Like the Phantom this is a third generation Aircraft. between 60-46 in KPAA inventory with maybe half still operational.
The last is the SU25K ground attack aircraft about 36 including trainers were delivered. again about half may be flyable.

After these are Mig 21 the backbone of the North korean airforce with estimates as high as 130 as low as 36 numbers in service also fluctuate. I lean to 36 operational as the KPAA got about that number from Kazakhstan in the early 90's and in 2013 a Shipment of Cuban "Sugar" on the Chong Chon Gang was inspected in Panama. The Brown Sugar had 2 Air defence missile batteries, 9 missiles for said batteries 2 Mig21Bis, and 15 Mig21 engines The Cargo was impounded crew eventually released the ship returned and since then renamed Tong Hun San
S

Registered Member
just to complete:
In the early 1990s, North Korea started assembling the MiG-29S-13 9.13 Fulcrum-C with the kits supplied by Russia in the Panghyon structure created to facilitate the flow of MiG spare parts, also produced here.
probably at that time the plan was too ambitious for North Korea, but even these 3 Mig-29s certainly gave important information on the structure and components and how to assemble them.
But since 1993, 25 years have passed and still fly, as prehistoric aircraft such as the Mig-15 and Mig-17 are still operating, indeed on these jets have implemented structural changes to install hard points for bombs; this indicates that North Korea now has good aeronautical structures / workshops available to provide for both the revision and the design of the modifications and their implementation.
Many aircraft and spare parts have been bought from the surplus of the countries that were part of the former USSR, from China, from the various countries that have or have already provided the aircraft of Soviet origin, but also the result of reverse engineering that may have also led to the reconstruction of aircraft to bring them to zero hours.
Returning to the Mig-29, just for the reasons mentioned above, the number available to North Korea is indicated from 35 to 45
S

Registered Member
correct:
only 3 Mig-29 kits have not been shown as completed, but information on the structure and components and how to assemble them is definitely available.

sahureka said:
Returning to the Mig-29, just for the reasons mentioned above, the number available to North Korea is indicated from 35 to 45
Click to expand...

Whatever the number 2 units were confirmed in operation in 2003 when they intercepted a RC135.
Public Satellite imagery has shown as many as 12 in the open.
reasons normally given for the disparities are first that the Russians wanted hard currency for their weapons the North Koreans wanted to Barter, second the North Koreans had technical issues assembling there Migs, Third there issues of reliable fuel, Spare parts and finally concerns over potential defections to the South with the planes. all have limited the numbers of available units.
As for accurate counts the North Koreans like to hide equipment, they do so by first use of Mockups and dummies to confuse observers, They are know to have constructed Underground Air Bases in which they can store such fighters out of prying satellites view, This allows them to show their aircraft when they want at propaganda displays where other simple tricks like having their jets do multiple flybys or recut videos can artificially inflate counts.
S

Registered Member
yes......not having irrefutable data, we all rely on hypotheses, often diminishing their abilities, and consequently falling very often into gross errors of assessment.

Former US Army deserter to North Korea dies
By:
Please, Log in or Register to view URLs content!
11 hours ago 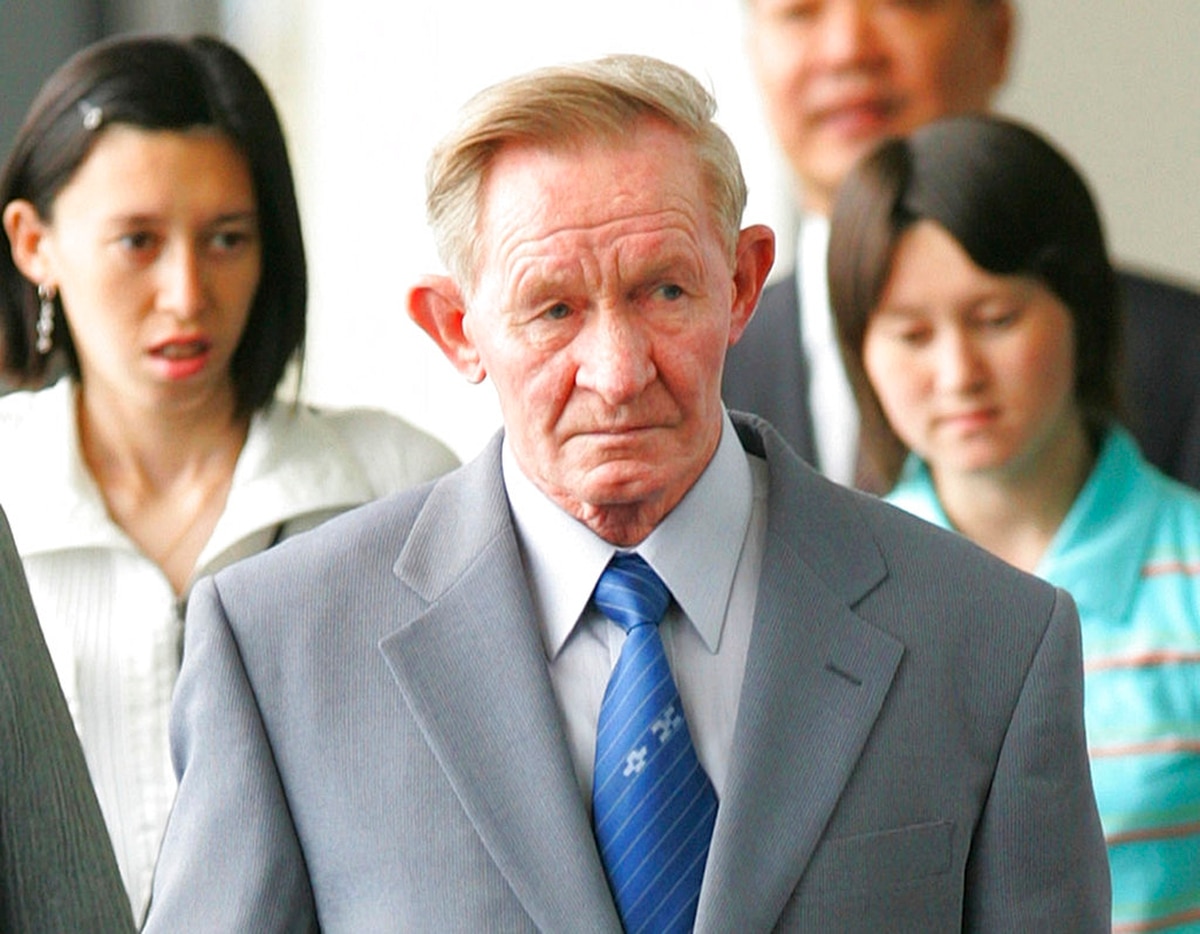 TOKYO — Charles Jenkins, a U.S Army deserter to North Korea who married a Japanese abductee and lived in Japan after their release, has died. He was 77.

Jenkins was found collapsed outside his home in Sado, northern Japan, on Monday and rushed to a hospital and later pronounced dead, a group representing families of Japanese abductees to North Koreas said Tuesday.

Jenkins, of Rich Square, North Carolina, disappeared in January 1965 while on patrol along the Demilitarized Zone dividing North and South Korea. He later called his desertion a mistake that led to decades of deprivation and hardship in the communist country.

Jenkins met his wife Hitomi Soga, who was kidnapped by Pyeongyang in 1978, in North Korea and the couple had two daughters, Mika and Blinda. His wife was allowed to visit Japan in 2002 and stayed. Jenkins and their daughters followed in 2004.

Once in Japan, Jenkins in 2004 was subject to a U.S. court-martial in which he said he deserted because of fear of being sent to fight in Vietnam. He pleaded guilty to desertion and aiding the enemy and was dishonorably discharged and sentenced to 25 days in a U.S. military jail in Japan. 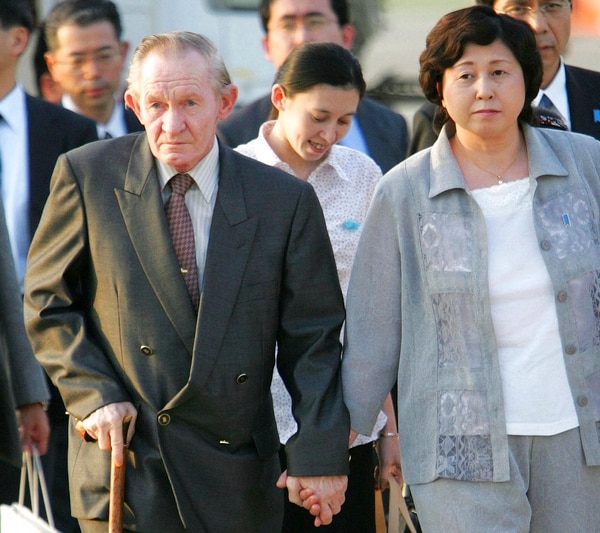 In this July 18, 2004, file photo, former U.S. Army deserter to North Korea, Charles Jenkins, left, escorted by his wife Hitomi Soga, right, and their daughter Mika, center, arrives at Tokyo's Haneda International Airport. (Itsuo Inouye/AP)
Jenkins and his family lived in Soga’s hometown of Sado, where he was a popular worker at a local souvenir shop and could often be seen posing in photos with visiting tourists.

Soga is one of 13 Japanese that Tokyo says were kidnapped to the North in the 1970s and 1980s as teachers of Japanese culture and language for agents spying on South Korea. Pyongyang acknowledged the abductions and allowed a Japan visit in 2002 for Soga and four others, who eventually stayed.

Jenkins, in his 2005 autobiographical book “To Tell the Truth,” and appearances at conferences on North Korean human rights, revealed that he had seen other American deserters living with women abducted from elsewhere including Thailand and Romania.

After settling in Japan, he visited North Carolina to see his mother and sister. But he said he had no plans to move back to the U.S.
Click to expand...