The Xpeng P7 is equipped with the latest generation of the world's leading prismatic battery pack, with a pack capacity of 80.87kWh and an energy density of 170Wh/kg. It integrates E-motor, transmission and control system in its high-performance 3-in-1 electric drive system. Compared with the traditional distributed electric drive layout, this gives higher efficiency, a more compact structure, lighter weight, more uniform interior layout, and greater reliability. The volume of the entire electric drive system is only 18.6L, and power density reaches the industry-leading 2kW/kg level. The maximum efficiency of the motor system is > 95%, with the NEDC efficiency greater than 85.5%, leading to longer battery life and stronger performance.
Click to expand...

"Imagine an electrical vehicle battery that can increase energy density per unit of volume by 50%, improve safety and enable a car to travel up to 600 kilometres on a single charge.

It appears the latter has been achieved, as Chinese electric carmaker BYD unveiled a new blade-shaped battery on Sunday, saying that many carmakers have shown interest in the space-saving and safer product,
Please, Log in or Register to view URLs content!
reported.

He Long, president of BYD’s battery business unit FinDreams, said, “Almost all carmakers you have heard of are in talks with us in terms of technical cooperation.”

He said the company has started mass production of the blade battery at its Chongqing plant, the report said."


Please, Log in or Register to view URLs content!
"Still, many people are nervous about electric cars, fearing they will short circuit in a car wash or a heavy rain, or burst into flames in the garage at any time. Allaying those fears will be an important step forward for the EV revolution.

That’s why the
Please, Log in or Register to view URLs content!
this week about its Blade Battery is important. The company says it can withstand all sorts of punishments that cause ordinary lithium battery cells to implode or explode — things like being penetrated by a nail, crushed, bent, heated in a furnace to 300°C, or overcharged by 260%."

Please, Log in or Register to view URLs content!
"The new battery uses a lithium iron phosphate chemistry but does away with conventional battery-pack architecture. It will feature in the new Han EV, the brand’s flagship sedan that is scheduled to launch in June, and is said to deliver nearly 376 miles in driving range to go with a 3.9-second 0-62 mph launch time."

Han EV from BYD, the first car that will use blade batteries: 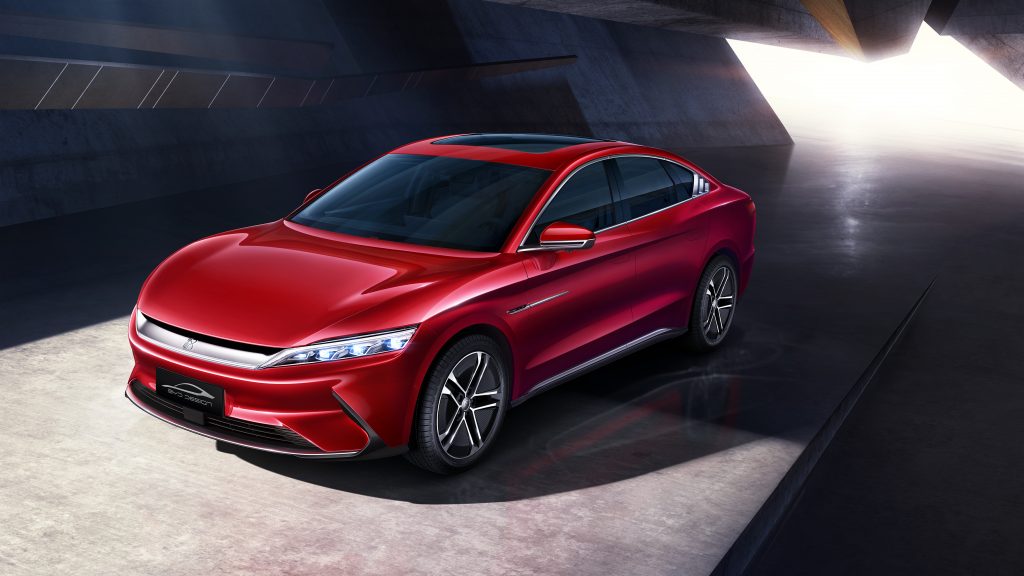 3D graphene-enhanced batteries can be charged to 85% of full capacity in 8 minutes.

Please, Log in or Register to view URLs content!
Cobalt-free batteries will have 880 km (550 mile) range. Cobalt is the most expensive metal in car battery and may face a supply bottle-neck in 2026.

One of them is the L6 long cell battery, which the company said will be fitted to a high-end model produced by Great Wall Motors.

The vehicle could reach a driving range of 880 kilometers, which is equivalent to that of any internal combustion car.

The battery will have a maximum energy density of 240 watt-hours per kilogram and be made with nanocoating and single crystalline cathode technologies.

Svolt's battery cell stacking technique also helps. In an interview last year, Yang said its batteries outperform the common jellyroll ones by 5 percent in energy density and by 10 percent in life cycle.

The second battery is smaller, with an energy density of 245 Wh/kg and a range of 600 km. It is compatible with most electric car platforms, said the battery maker.

Developments on the fuel-cell front:

Toyota Motor Corp. is teaming up with five Chinese companies including Beijing Automobile Group Co. and China FAW Corp. to develop fuel cells for commercial vehicles, seeking to push deeper into China and the market for the alternate energy source.

The other joint venture partners are Beijing SinoHytec Co., Dongfeng Motor Corp. and Guangzhou Automobile Group Co., the companies said Friday. The new Beijing-based entity, which will be 65% owned by Toyota, will be called United Fuel Cell System R&D and start with an initial investment of 5 billion yen ($46 million).
Click to expand...

It seems that China's CATL has beaten both Tesla and GM to become the first battery manufacturer in the world to offer a battery that can last 2 million kms (1.24 miles) and 16 years.

A Million-Mile Battery From China Could Power Your Electric Car
Click to expand...

The Chinese behemoth that makes electric-car batteries for Tesla Inc. and Volkswagen AG developed a power pack that lasts more than a million miles -- an industry landmark and a potential boon for automakers trying to sway drivers to their EV models.

Contemporary Amperex Technology Co. Ltd. is ready to produce a battery that lasts 2 million kilometers (1.24 million miles) and 16 years, Chairman Zeng Yuqun said in an interview at company headquarters in Ningde, southeastern China. Warranties on batteries currently used in electric cars cover about 150,000 miles or eight years, according to BloombergNEF.

Extending that lifespan is viewed as a key advance because the pack could be reused in a second vehicle. That would lower the expense of owning an electric vehicle, a positive for an industry that’s seeking to recover sales momentum lost to the coronavirus outbreak and the slumping oil prices that made gas guzzlers more competitive.

Concerns about batteries losing strength and having to be replaced after a few years is one factor holding back consumer adoption of EVs. Tesla last year flagged it expected to bring into production a battery capable of a million miles of operation, and General Motors Co. last month said it is nearing the milestone. That distance is equivalent to circling the planet 50 times.

Anticipating a rapid return to growth for the EV industry, CATL is plowing research-and-development dollars into advances in battery technology. While the coronavirus outbreak will drag down sales throughout this year, EV demand will pick up in early 2021, said Zeng, who founded CATL a decade ago.

Car buyers holding back during the pandemic is creating pent-up demand that will be unleashed starting next year, led by premium models, he said. CATL’s customers include BMW AG and Toyota Motor Corp.

Zeng’s comments strengthen views that electric vehicles are set to weather the economic slowdown caused by the outbreak better than gas guzzlers. Battery-powered cars will swell to 8.1% of all sales next year in China, which accounts for the largest share of global EV sales, and to 5% in Europe, BNEF predicts.

“The pandemic may have a lasting effect throughout 2020, but won’t be a major factor next year,” Zeng said. “We have great confidence for the long run.”

CATL struck a two-year contract in February to supply batteries to Tesla, a major boon for the Chinese company as the U.S. electric-car leader has thus far mainly worked with Japan’s Panasonic Corp. and South Korea’s LG Chem Ltd. The deal followed months of negotiations, with Tesla Chief Executive Officer Elon Musk traveling to Shanghai to meet with Zeng.

The CATL batteries are set to go into Model 3 sedans produced at Tesla’s massive new factory near Shanghai, which started deliveries around the beginning of this year. Batteries are the costliest part of an EV, meaning suppliers of those components have a chance to reap a lion’s share of the industry’s profits.

Zeng said he often shares insights with Musk, with the two exchanging text messages about developments in technology and business. CATL is strengthening its relationship with Tesla, with matters such as cobalt-free batteries on their agenda, Zeng said.

“We’re getting along well and he’s a fun guy,” Zeng said of Musk. “He’s talking about cost all day long, and I’m making sure we have the solutions.”

Zeng said Musk also requested his help in obtaining ventilators for coronavirus patients. The U.S. billionaire delivered more than 1,000 of the breathing machines from China to officials in Los Angeles in March.

Shares of CATL have advanced about six-fold in Shenzhen since its initial public offering in 2018, giving the company a market value of about $47 billion. Tesla, by far the most valuable EV maker, has a market capitalization of about $160 billion.

A “trigger point” for electric cars will occur once they overtake gasoline-powered vehicles around 2030-2035, Zeng said. That view is more ambitious than that of researchers such as BNEF, which expects the shift to take place a few years later.

CATL, which is adding a production facility in Germany, is set to make more than 70% of batteries required by BMW, an early customer, Zeng said. CATL also works with Volkswagen’s Audi unit and is cooperating with Porsche, he said.

Zeng didn’t rule out building a plant in the U.S., though he said the company has no specific plans for now.

“Our team has made achievements in competing with our global rivals in overseas markets,” Zeng said.
Click to expand...

There was some discussion about Chinese EV makers in the Chinese Economics thread. I would like to discuss a little bit more here.

Please, Log in or Register to view URLs content!
Three BYD models will be equipped with the blade batteries initially - Han and Song on the domestic market, and Tang to the European market (Norway initially).