bladerunner said:
including a Thai pizza that has no cheese but is covered with carrots, red peppers, mushrooms, scallions, peanuts and a homemade sauce that has a spicy kick.
Click to expand...


Maybe they can have vegetarian 'meat' made from bean products. They are popular with Asian vegetarians.


Maybe they can have vegetarian 'meat' made from bean products. They are popular with Asian vegetarians.
Click to expand...

Whats to stop them taking a can of Watties Spaghetti and meatballs. According to the useby date, its got a shelf life of 3yrs. Come to think of it I think some of the tinned food Scott took with to the Antartic at the beginng of the 20th century is supposedly edible

Meanwhle from the China Daily

TOKYO - An unmanned cargo carrier to supply goods to the International Space Station (ISS), "the Konotori 3", was successfully launched into orbit by an H2B rocket in southwest Japan on Saturday.

The rocket blasted off from the Tanegashima Space Center in southwestern Japan at 11:06 am local time, the public broadcaster NHK reported.

The cargo carrier separated from the rocket at an altitude of about 288 kilometers about 15 minutes later.

The transporter is carrying 4.6 tons of cargo, including food, experiment hardware, and micro-satellites developed by Japanese universities and companies, according to the Japan Aerospace Exploration Agency.

The event marked the third launch of the spacecraft by the Japanese space agency.

The cargo carrier will be docked to the ISS by a robotic arm used by the space station crew.

The British bidder, a company that for more than a decade has been designing a space plane called Skylon using a radical new engine design for atmospheric and orbital flight, was not selected for what ESA calls its New European Launch Service."

"When the European Space Agency's Euclid spacecraft launches in 2019, it will kick off an ambitious mission to map more than 70 million galaxies with a single goal: shining a light on the invisible dark matter and dark energy binding the universe together.

Named for the ancient Greek mathematician, Euclid will peer into space in the visible and near- infrared spectrum in search of signs of dark matter and its counterpart, dark energy. Both are challenging because they cannot be measured directly. Instead, astronomers measure the phenomena by their gravitational influence on visible matter, such as stars and galaxies. "

The European Space Agency (ESA) is starting preparations for a mission to Jupiter. The Jupiter Icy Moon Explorer (JUICE) project, approved for implementation in 2022, is to explore the giant planet and its icy satellites: Europa, Ganymede, and Callisto.

Russian scientists are considering the possibility of participating in the mission, but the implementation of these plans depends on the previous planetary program.

Lee Fletcher from JUICE’s Oxford University scientific group presented the objectives of the Jupiter exploration, utilizing the European JUICE spacecraft, at the Scientific Assembly of the International Committee on Space Research (COSPAR) in Mysore, India. The ESA’s JUICE mission – a reduced version of the more ambitious EJSM project – was chosen as the L-class mission (L meaning “large”) within the framework of the Cosmic Vision program.

The Europeans are not facing an easy task. Initially, the EJSM project included two satellites: the ESA’s JGO was meant for exploring Jupiter and Ganymede, while NASA’s JEO is intended for exploring Jupiter and Europa. The Japanese were also going to participate in the mission with their equipment for studying Jupiter’s magnetosphere. At the same time, there was a possibility of a detailed study of both the planet’s satellites and Jupiter itself.

Since 2005, spacecraft only occasionally visited the largest planet of the Solar system on their way to other destinations: Cassini was headed for Saturn, while New Horizons for Pluto. It was just recently that the American Juno spacecraft aimed at studying the atmosphere of the planet was sent to Jupiter. Thus, JUICE is designed to close the gap in exploration of the major planets.

The difficulty lies in the fact that one spacecraft is to examine Jupiter and its three satellites: Europa, Ganymede, and Callisto. According to the present ballistic scheme of the expedition, the exploration of Jupiter, including its high latitudes, should take 26 months, and after that the spacecraft should change orbit and explore the satellites.

The task of searching for traces of potential life or substances supporting it on the satellites was widely discussed. Yet Jupiter itself is nonetheless interesting, as it represents a natural space laboratory for studying fluid dynamics. In this case, while Juno will study the deeper layers of the atmosphere, JUICE will focus on the upper layers, both vertical (energy transmission, convection, and cloud formation study) and horizontal (processes on different latitudes, polar regions, and their connection with the magnetosphere and the polar lights). Another question for studying is variations of the atmosphere. Devices working in the wide range of electro-magnetic radiation (from ultra-violet to radio range) and possessing a wide spatial and temporal resolution are needed for the implementation of these tasks.

Russia is interested in the JUICE project to some extent, and two years ago, when the EJSM project was under development, Russian scientists suggested joining the program with their spacecraft aimed at landing on Europa. At the same time, the Russian mission was mainly interested in the NASA spacecraft aimed at Europa’s preliminary exploration. In its present condition, JUICE does not include the spacecraft’s long stay near Europa. That is why Russia has to review the plan of the mission: it should either send a spacecraft to conduct research on the spot, or to send a mission to Ganymede, which is considered to be less promising from the point of view of finding traces of life or conditions for its existence there.

However, it should be understood that sending a lander to the Jupiter system is an extremely difficult project, and not much time remains for its implementation. The next launch as part of the Russian planetary program is scheduled for 2014. It is the joint Russian-Indian Luna-Resource project, which also includes the Russian lander. Then, as it has recently been voiced by the Russian Space Agency, there are plans for some ten scientific missions up to 2018. Among them is a further study of the Moon.

The question is whether or not it is compatible with a flight to Jupiter. On the one hand, the international agencies’ practice shows that along with the smaller-scale missions, larger “flagship” projects are constantly being developed. The Jupiter mission could become such a large-scale project for Russia. On the other hand, perhaps, it would be more prudent for Russia to choose a gradual recovery of the space industry accompanied by more frequent, but less complex launches, and consistent development of various systems.
Last edited: Jul 22, 2012
N


bladerunner said:
Whats to stop them taking a can of Watties Spaghetti and meatballs. According to the useby date, its got a shelf life of 3yrs. Come to think of it I think some of the tinned food Scott took with to the Antartic at the beginng of the 20th century is supposedly edible
Click to expand...

I think they will be pretty messy to eat in zero g.


Maybe they can have vegetarian 'meat' made from bean products. They are popular with Asian vegetarians.
Click to expand...

Ironic part is that they taste just like dried tofu, not real meat.

Don't bean based products produce gas??? I think astronauts might want to avoid such a diet.
N

Lolz didn't thought of that.

Three years of their hard work plunged in the Atlantic Ocean on a Monday in July and a group of NASA engineers could not have been more thrilled.

They were part of the Inflatable Reentry Vehicle Experiment (IRVE-3) team that is working to develop an inflatable heat shield. The technology could be used to protect spacecraft when entering a planet's atmosphere or returning here to Earth.

A 64-foot, 22-inch (19.5 meters, 56 centimeters) diameter Black Brant XI sounding rocket launched the IRVE-3, encased in a nose cone, from NASA's Wallops Flight Facility on Virginia's Eastern Shore. The rocket with the inflatable on board shot 288 miles (463.5 kilometers) up and IRVE-3 and its payload were ejected into the atmosphere. The technology demonstrator inflated and fell back to Earth -- cameras and temperature and pressure sensors monitoring its performance all the way down. After a total of 20 minutes -- from launch to splash down -- it landed in the Atlantic about 100 miles (161 kilometers) East of Cape Hatteras, North Carolina.

"Everything went well... like clockwork. The IRVE-3 performed just as it was supposed to," said Neil Cheatwood, IRVE-3 principal investigator at NASA's Langley Research Center in Hampton, Va. "It entered Earth's atmosphere at Mach 10, ten times the speed of sound, and successfully survived the heat and forces of the journey. Temperatures recorded were as much as 1,000 degrees Fahrenheit (538 degrees Celsius) and the IRVE-3 experienced forces up 20 G's."

What makes that particularly remarkable according to engineers is that the IRVE-3 wasn't made of metal or composite materials like most spacecraft heat shields or aeroshells -- it was made of high tech fabric and inflated to create its shape and structure. The IRVE-3 looked like a 10-foot (3 meter) diameter mushroom composed of a seven giant braided Kevlar rings stacked and lashed together -- then covered by a thermal blanket made up of layers of heat resistant materials.

The trip through the atmosphere provided researchers lots of data that will help them design better heat shields in the future. But they will also have the chance to study the IRVE-3 first hand. A high-speed Stiletto boat provided by the U.S. Navy was on stand by to retrieve it. Stiletto is a maritime demonstration craft operated by Naval Surface Warfare Center Carderock, Combatant Craft Division, and is based out of Joint Expeditionary Base (JEB) Little Creek-Ft Story, Va. 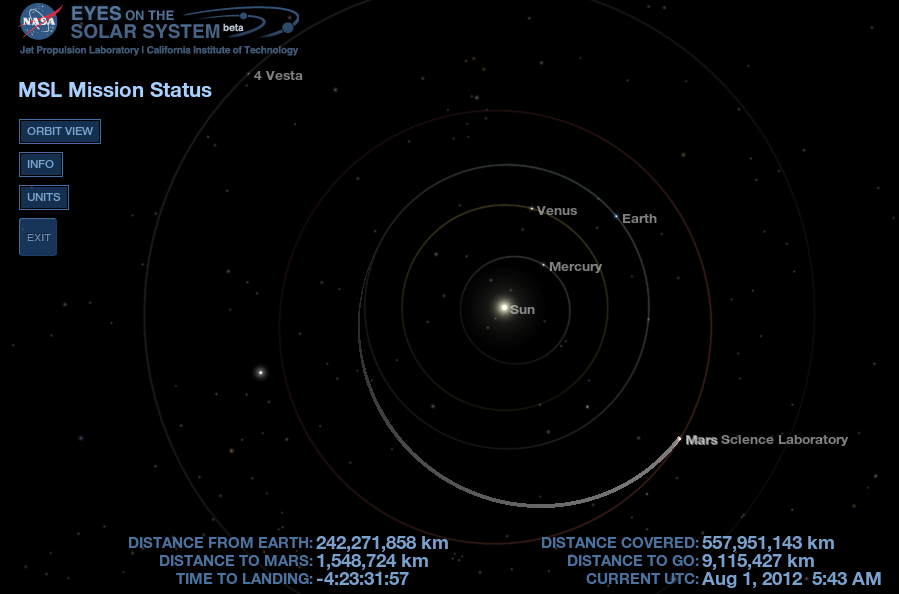 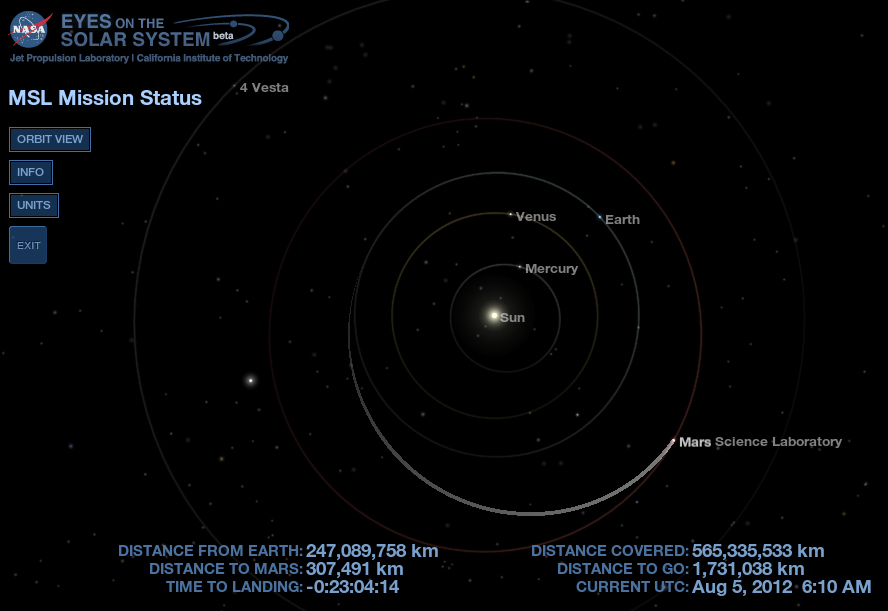 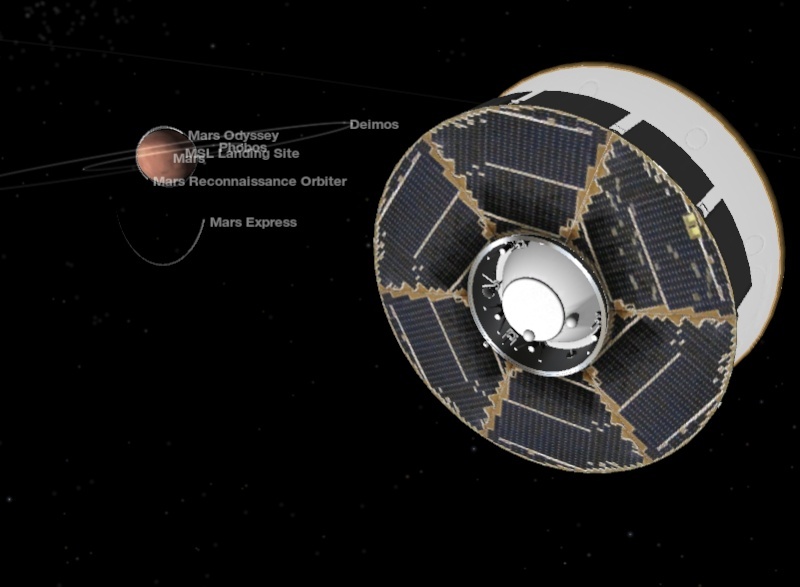 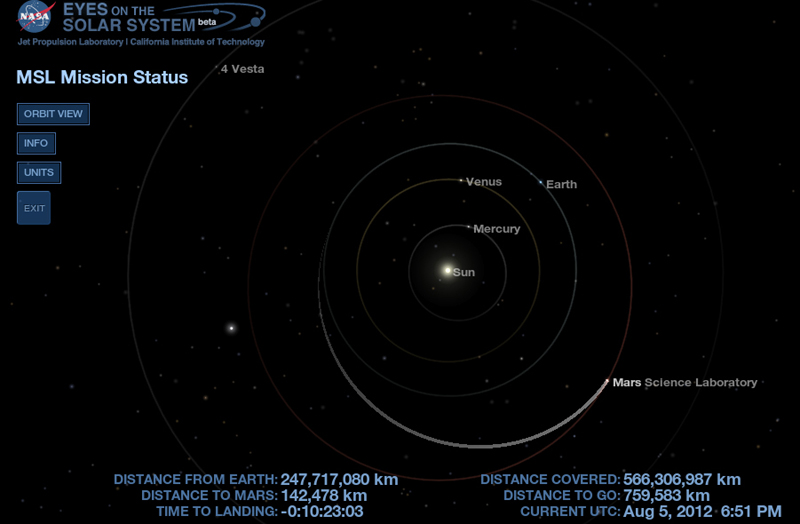