hijiki said:
You have a fantastic model collection and an enjoyable fleet groups to look at so it sort of makes one want it to be true that the JMoD was originally intending to have a ski-jump on them but I don't think there has ever been official statment on that or even annonymous leak of MoD thinking. The plastic model company, manga Ibuki, went on that assumption on their own I think.

Yeah, I think the flat square deck extension should help interoperability with US forces. The first F-35Bs to literally give a test run off the two modified Izumo-class ships will US, not Japanese. So the same deck shape should make cross decking easier. Although US F-35Bs have already landed and taken off from the UK's Queen Elizabeth but maybe that took a little extra training that the US may not want to have the whole US F-35B fleet to include in their training. But it'll still be needed if they want to cross deck off of Australian LHDs in the future. The plain square shape on the modified Izumo ships may also just be less expensive than adding a slope to it.

With that said, I have received to mod warnings. Both were bull shit "infringement" reasons, with the second one coming with the warning that the next "infringment" on these Pro-CCP forums would result in permanant ban. So I have no intetest in contributing more to these boards with only saving my potentially last post on the boards for when it would matter much. Replying to you is sufficiently worthy enough. Definately see no point in contributing while at the same time becoming harmonized by self-censoring myself. What's the point then other then to make myself a tool?

No Probs... nothing in your post had ANY warning worthy anything, and certainly not ANY banning issues.

It was a good post and I know I appreciated it...and have been around here, now with an ever decreasing number, for a long time.

Having said that I believe the western forces in the western pacific have hit upon a strong strategy to counter the phenomenal growth and modernization of the PLAN.

In carriers that involves the F-35B which I forecast a good ten years ago. With Korea and its two Dokdos, Japan and its two Izumos, potentially India and its two and then three carriers, Australia and its two and the US and its four new escort carriers (2 LHA and 2 LHDs) you add 12-13 strong carriers with 5th generation aircraft to be operational, all of them, by 2025 or so. By that time the PLAN will have potentially gotten its 3rd carrier and be building and preparing to launch its 4th. And that does not include the existing 10-11 CVN super carriers the USN operates of which 6 are dedicated to the Pacific. So as the PLAN is readying number four, the west will have 18-19 carriers available in the Pacific, with reserves consisting of two UK, two Italian, two Spanish, two Italian, and two Egyptian over in the Med snd Atlantic, plus the other five US carriers...that's another fifteen.

The same type of strategy is developing DDGs, FFGs, and SS and/or SSKs.

The US itself maintains, for all intents and purposes an unassailable advantage in nuclear submarines, and with all of those same countries, plus a few more building a lead in the conventional sub area, you see a potentially unassailable position there too. And what even adds more weight to that strategy?

Well you have the US Navy constantly training with and intergrating operations each year with its many foreign allies...over and over again, so all of those nations that have trained so well together for decades, could quickly and efficiently roll over to combat operation if that was ever necessary...and let's pray they never are.

Despite the large disparity in numbers, and a continuing lead in technology in a number of key categories, the West cannot afford to underestimate the PLAN. What the PLAN has done in the last 15-20 years is phenomenal, and their equipment is all now building to have a very high percentage to be very new, with very well developed technology. In addition, they are doing a LOT of traning on their own and have begun developing very good SOPs and planning such they are quickly developing a very modern naval tradition themselves very quickly, which, as I say cannot be ignored or taken for granted.

It is clear that the military planners and developers in the west are not doing so, and have developed very strong counter strategies in turn, that will be extremely difficult for the PLAN to overcome because all of these nations, which have respectable traditions and naval building of their own such that the combination of them all, as is shown in the carrier development, is far out pacing the PLAN at the current time...and they need to continue to do so. If they ever decide they have "done enough" they may find themselves falling behind in first a few areas, and then as the PLAN, with its 50 and 100 year efforts, do not let up. There has to be commitment to the long term where none of these single allied nations becomes too dominant...although th US due to historic reasons in WW II and the cold-war has already done so, and as s result has been leading the planning to try and keep the whole in a position to continue this development for the long term to, as a group maintain the alliances, and the lead to effectively deter the PRC in case it is necessary, while also genuinely attempting to reach the hand of cooperation out to them.
Last edited: Mar 3, 2021
X While another shipyard, Mitsui E & S Shipbuilding located in Okayama launched the second ship of the class, Kumano, back in November 2020, Mogami is the first ship of the 30FFM class. This is because Mitsui E&S received a subcontracting order from MHI (the main contractor) for the construction of the 3,900-ton frigate for the JMSDF.
Click to expand...

Missed this one. From a couple of weeks ago, but here it is anyway. Third Mogami-class frigate has been launched.

Staff member
Super Moderator
What's the normal operating procedure for drying bed sheets/mattresses on a naval ship? Does anyone know? 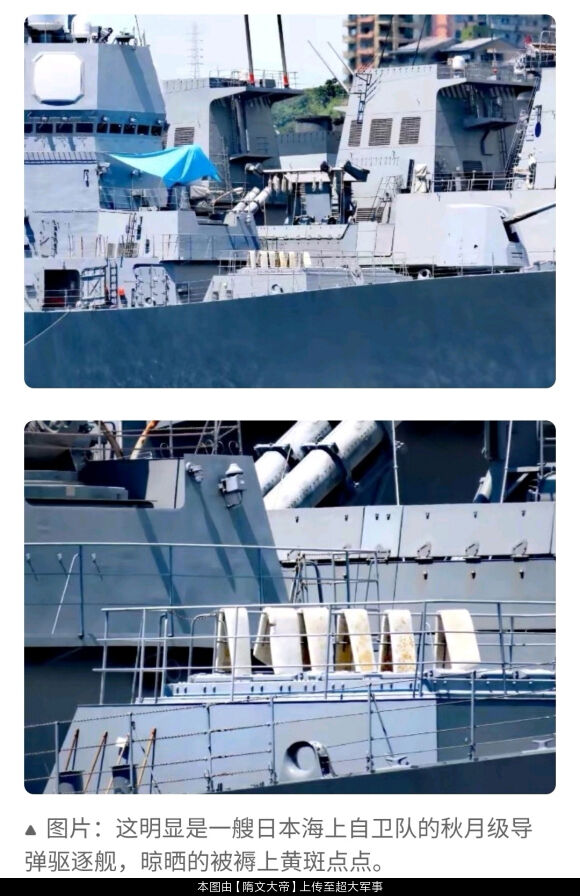 siegecrossbow said:
What's the normal operating procedure for drying bed sheets/mattresses on a naval ship? Does anyone know?

I seem to recall the Japanese giving Beiyang Fleet shit for exactly this a long time ago.

Temstar said:
I seem to recall the Japanese giving Beiyang Fleet shit for exactly this a long time ago.
Click to expand...

That was a rumor made up by Chinese liberals. Back in the late 19th century most ships didn't have easy access to dryer facilities so even the Japanese and British navies were drying laundry the same way. The question is whether that is the case now. My opinion is that maybe they had to make do with the railings because the mattresses are too large to fit in the standard dryer, but my naval knowledge is limited so I'm posting this question.

Augggh ,
Drying bed mattress or for that matter any laundry items is still done under the sun.
Some points in open air drying, the ultra-violet rays actually sanitizes the laundry during drying.
Meaning it not only disinfect but also deodorize the mattress and kills any bedbugs that may lurk within.
If you have not ever slept in a mattress fully dried under the scorching sun then I suggest you do since it is the best experience you will ever have.

SamuraiBlue said:
Augggh ,
Drying bed mattress or for that matter any laundry items is still done under the sun.
Some points in open air drying, the ultra-violet rays actually sanitizes the laundry during drying.
Meaning it not only disinfect but also deodorize the mattress and kills any bedbugs that may lurk within.
If you have not ever slept in a mattress fully dried under the scorching sun then I suggest you do since it is the best experience you will ever have.
Click to expand...

That's a very good point. I haven't thought about the disinfection angle. Modern warship cabins are cramped, indoor spaces which are good habitat for bacteria and mold.
You must log in or register to reply here.