Eurofighter said:
please do not act annoyed as I wasn't trying to offend. isn't this forum a place to share thoughts in a civil manner? and excuse me if this topic had been discussed ad nauseum, I simply wasn't aware. But I'll stop.
Click to expand...

I'm not annoyed and I also do not feel offended, all I wanted to note is that this has been discussed more than once and so far no new arguments were brought forward. As such in order to not repeat again and again the same discussion those who are interested, those who do not know the arguments are those who are new might look at this - oe better these - discussions on previous pages instead of repeating the same story again.
T

Eurofighter said:
I have marked the area in question in the attached photo. What I mean is that the sloped angle at the back of the bay shows there is some vertical space left in the bay allowing two additional missiles to be sort of "stacked" below the existing 4 missiles. The problem is that is it hard to get a precise measurement of how much that additional space in the vertical direction actually is. But it is not a stretch to see that it is possible to utilize that additional space for more (or bigger) weapons.
Click to expand...

That slopped area is there for aerodynamic reasons and it can not be reused as you have suggested. There is a paper studying the air turbulence and its impact on aircraft control and stability when the bay doors are opened. The paper also studied the force distribution of that turbulence inside the bay. The final geometry of the bay is determined based on the study. In the paper it specifically mentioned that the big slop at the end and a small slop at the front is needed to reduce the turbulence.
C

Deino said:
But this was discussed ad nauseum ... each time again with the same result: There si currently not enough space for a 3rd PL-15 in each bay, period!
As such there is also no need to open up this can of worms again.
Click to expand...

unless the pl15 is modified 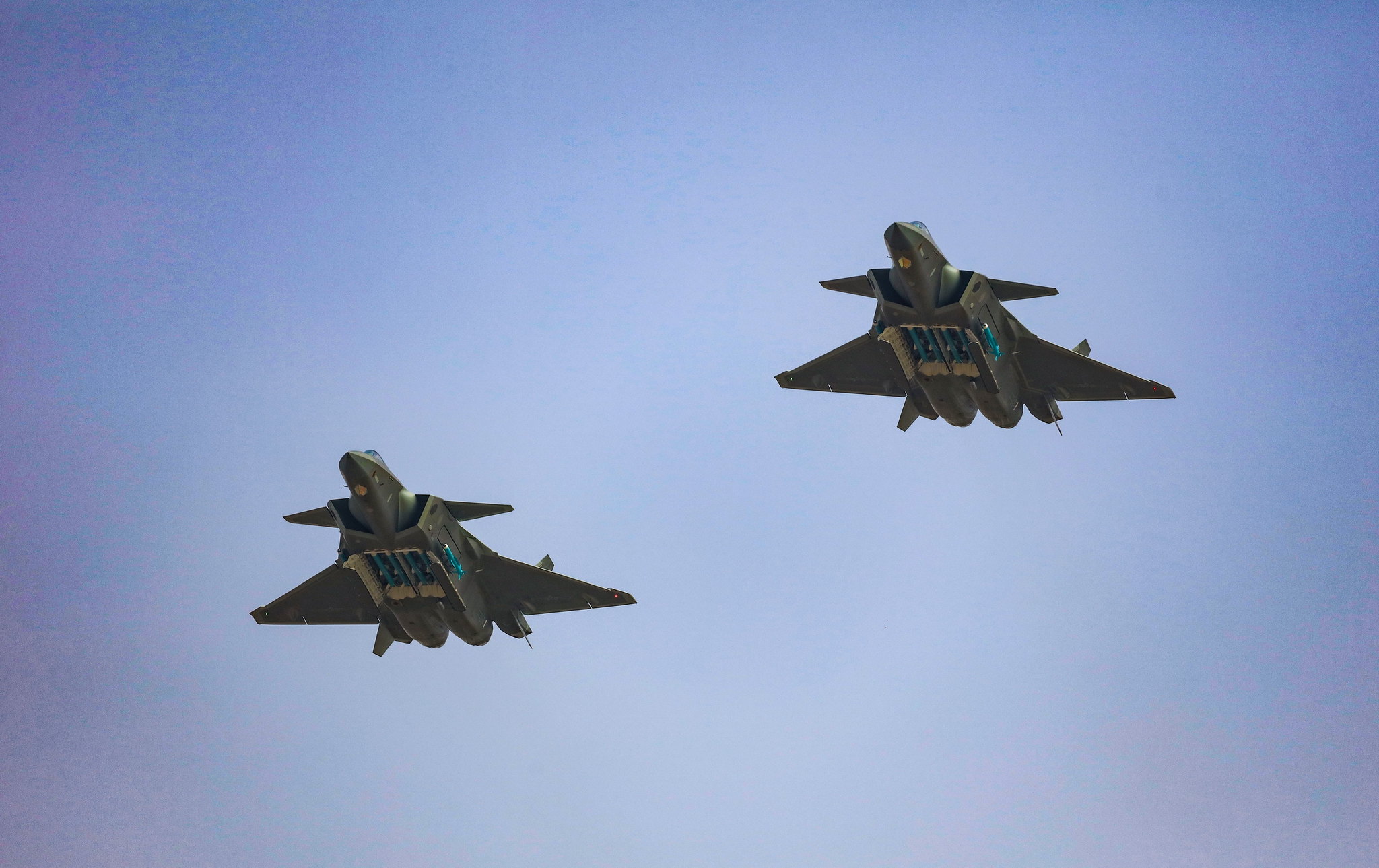 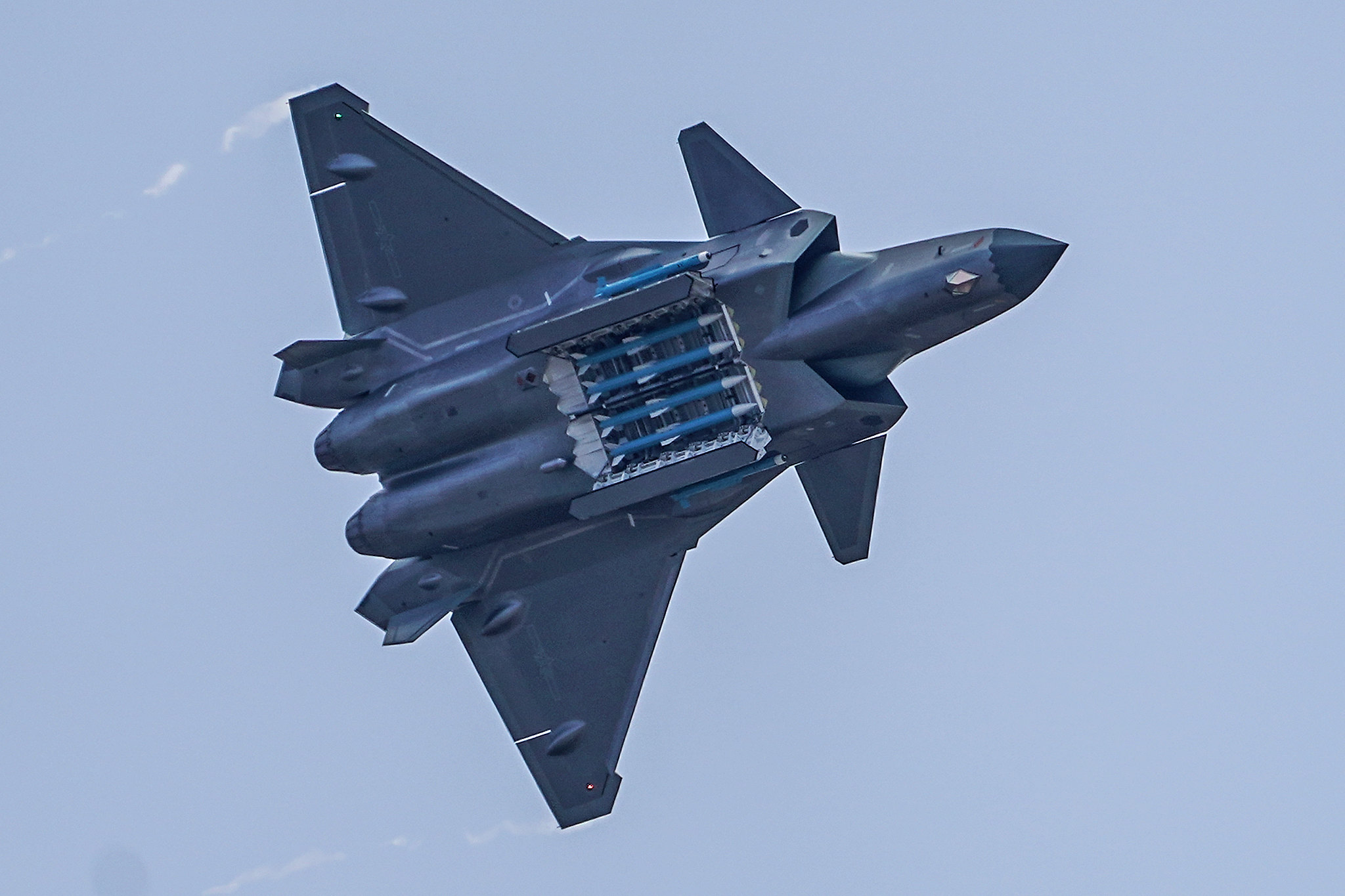 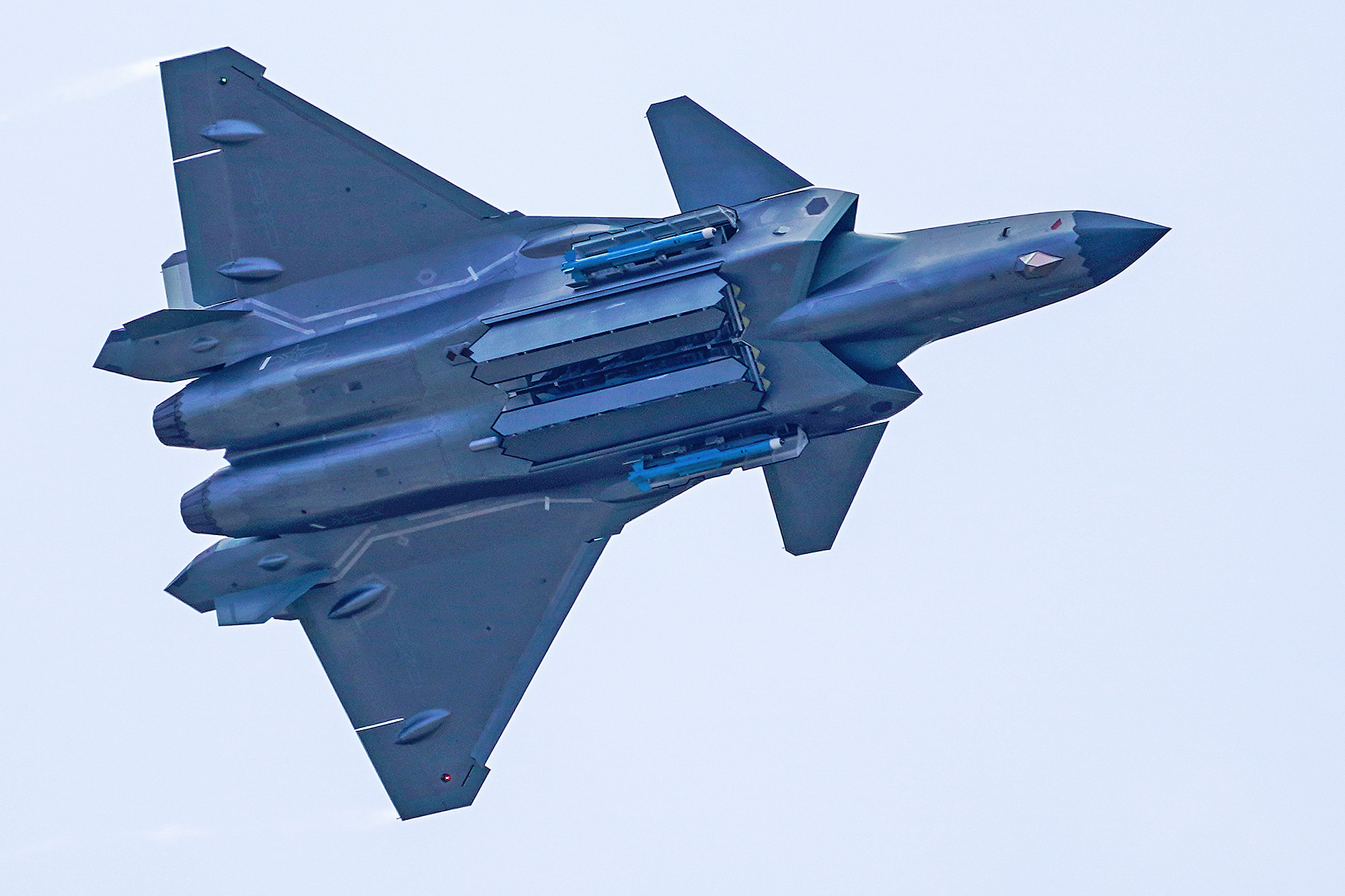 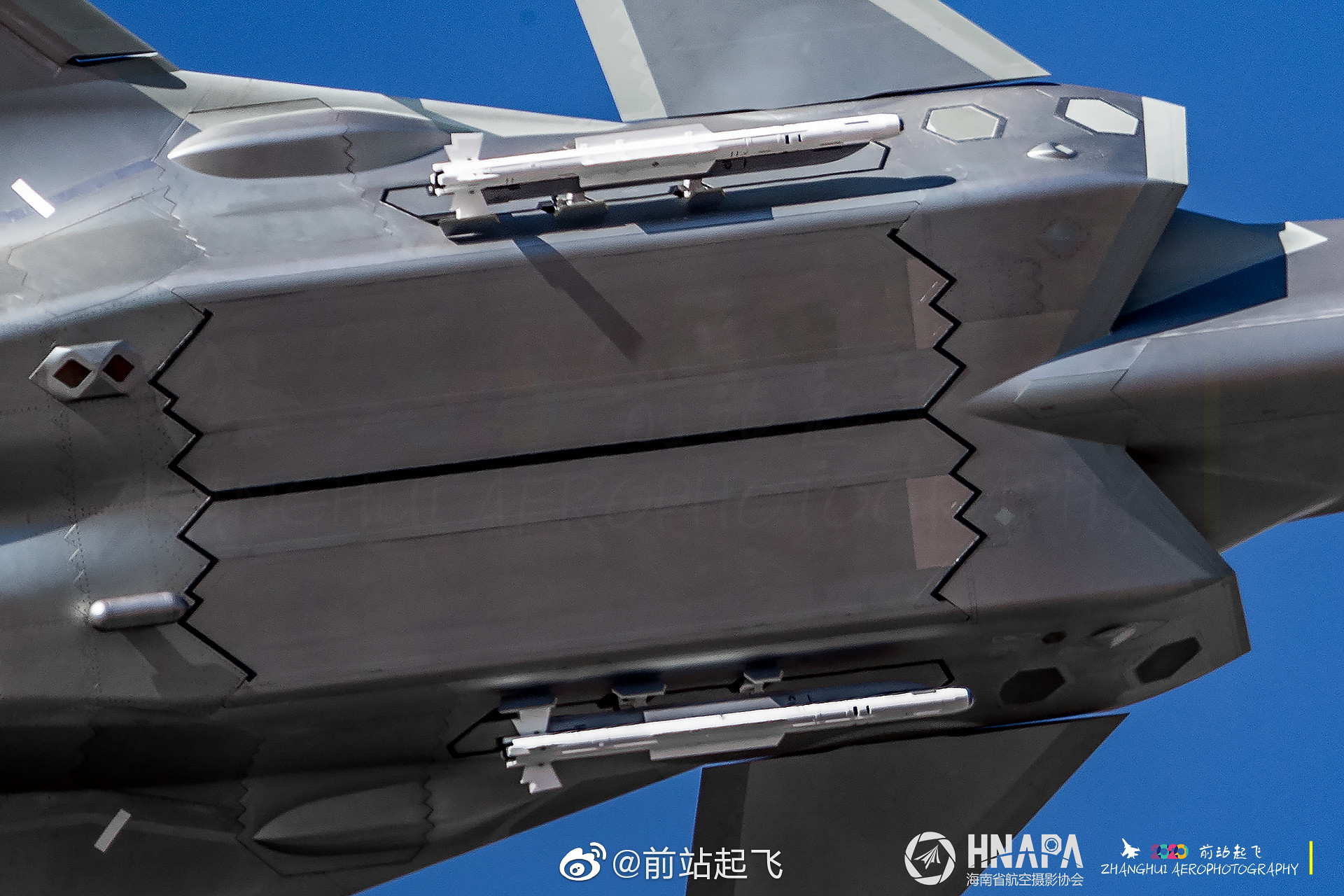 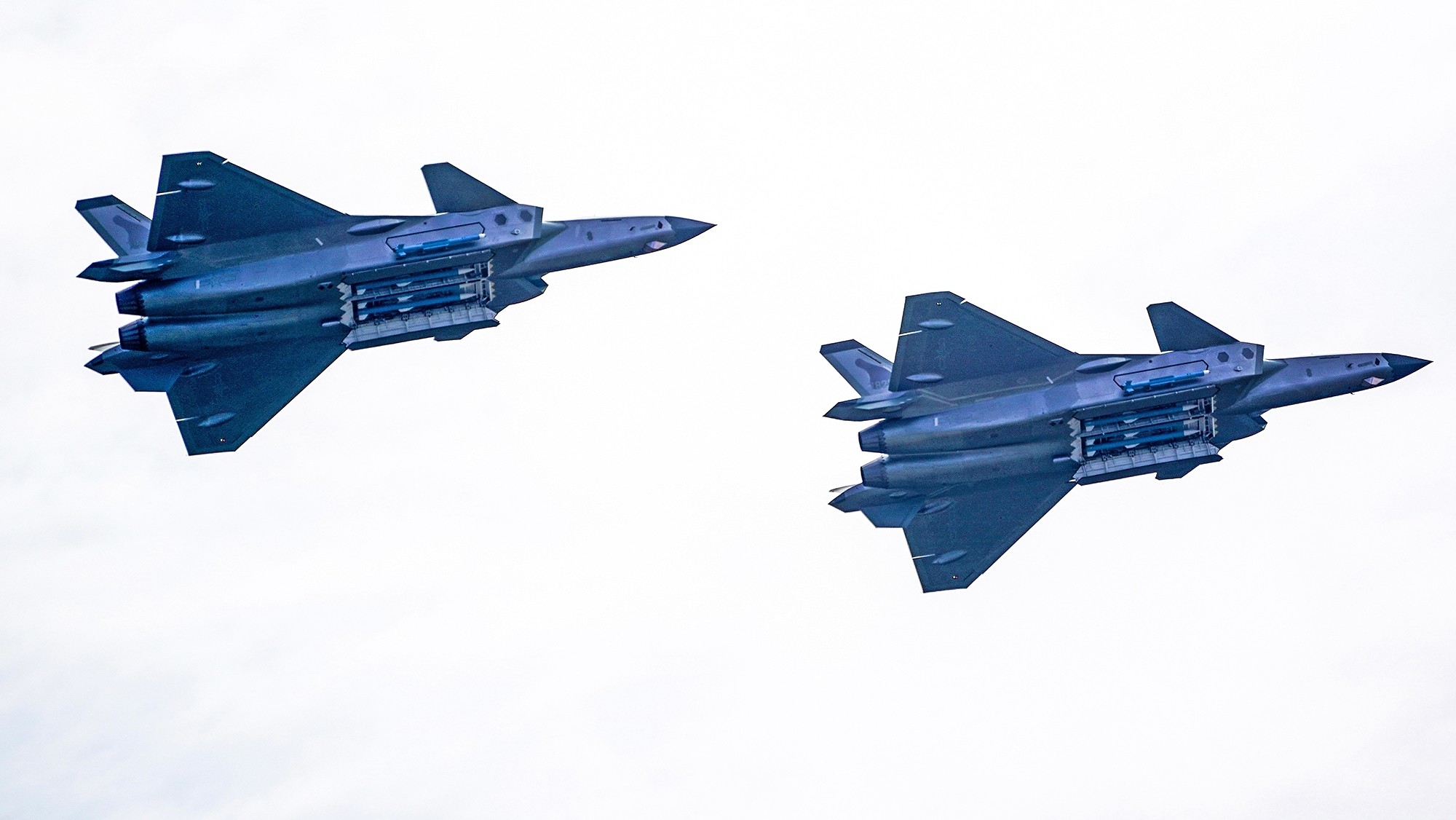 Not so sure if it was discussed before, but it mentioned the 17:0 between the J-20 and some 4th/4.5th Gen fighter in the drill.
B

Inst said:
Show me a version of the J-20 with canards, but without tailfins. 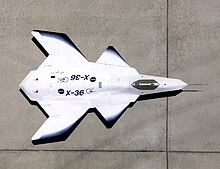 IMO, if a strike variant of the J-20 is desired, moving the engine off center as with the Su-57 is desirable.

There's roughly 8-10 meters available on the J-20 in length if a channel is placed between the engines. Making it 1.4 meters wide (or adding 700mm spacing), it could theoretically fit the DF-21D in terms of diameter, but not in length (would need 10.7 meters to squeeze it in). Making it 1 meter wide, it could fit the Kinzhal missile, making the J-20 an excellent striker.

What's come up recently is that the NGAD has taken its first flight, and likely it'll be a tailfinless UHF-stealth optimized air superiority fighter / interceptor aimed at taking out Chinese AEW&C. This makes it even more imperative for the Chinese to continue to develop the J-20 platform.

A canard-ed tailless J-20, for instance, would be an excellent strike fighter, but to make it fully a UHF-stealth fighter both the tailfins and the canards would have to go.

But relying on TVC for pitch and yaw control would be quite a challenge. The advantage of the J-20's canards is that the canards make the development of the J-20 into a TVC-dependent fighter much easier; a strike variant wouldn't necessarily need the same hard maneuvering as a an air superiority variant so removing the tailfins would further decrease risk and allow experience in working a tailfinless TVC aircraft's aerodynamics.

Once the TVC has become fully mature, then the J-20 can evolve into a NGAD-like configuration, with neither tailfins nor canards and very strong UHF-stealth.

If Chinese engine thrust continues to increase, the interceptor version (i.e, the NGAD) with neither canards nor tailfins could be comparably maneuverable as the strike and dogfight versions.
Click to expand...

Just saw your request. Sorry for the late reply, anyway here it is. J-20 without vertical stabilisers. I also added a copper tint on the canopy to simulate the indium tin oxide coat found on F-22's canopy. 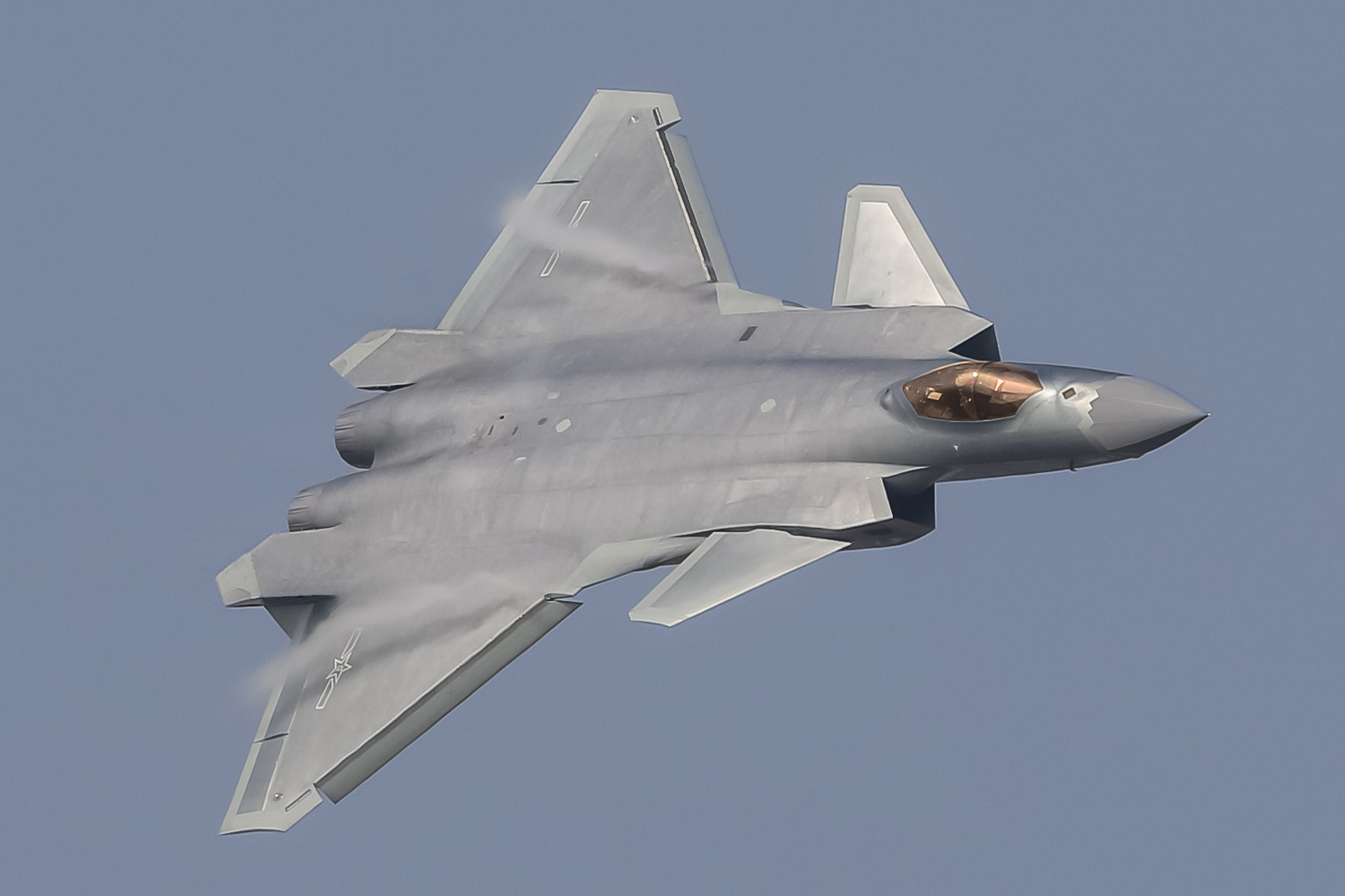 benny said:
Just saw your request. Sorry for the late reply, anyway here it is. J-20 without vertical stabilisers. I also added a copper tint on the canopy to simulate the indium tin oxide coat found on F-22's canopy.

Now, I'm seriously asking for too much here; a tailfinless J-20 is something I've wanted to see for ages, but...

Say the engines get moved to where the rear ECM housing is right now. Extend the wings slightly to the rear to connect into the former ECM housing. Add a triangle for ECM between the current engines.

That'd basically be my "strike J-20", i.e, a J-20 with enough weapons bay capacity to carry both heavy interception missiles like the PL-21 as well as ALBMs in the Kinzhal or DF-21D class.
B

Inst said:
Now, I'm seriously asking for too much here; a tailfinless J-20 is something I've wanted to see for ages, but...

Say the engines get moved to where the rear ECM housing is right now. Extend the wings slightly to the rear to connect into the former ECM housing. Add a triangle for ECM between the current engines.

That'd basically be my "strike J-20", i.e, a J-20 with enough weapons bay capacity to carry both heavy interception missiles like the PL-21 as well as ALBMs in the Kinzhal or DF-21D class.
Click to expand...

Here it is, the J-20 Stealth Strike Fighter. I must admit this was tough to do, as seen it's as not smooth as I wanted it to be.
Engines farther apart hypothetically had made more space for belly weapon's bay area.. Possible set backs, due to engine repositioning the Y-duct intake is gone, the starboard PL-10 missile bay probably shrunk if not eliminated and must be put into somewhere else. Also If this is to be a strike fighter variant, this jet should be dual seater. This configuration reminds of F-14 because of the big rear gap.. 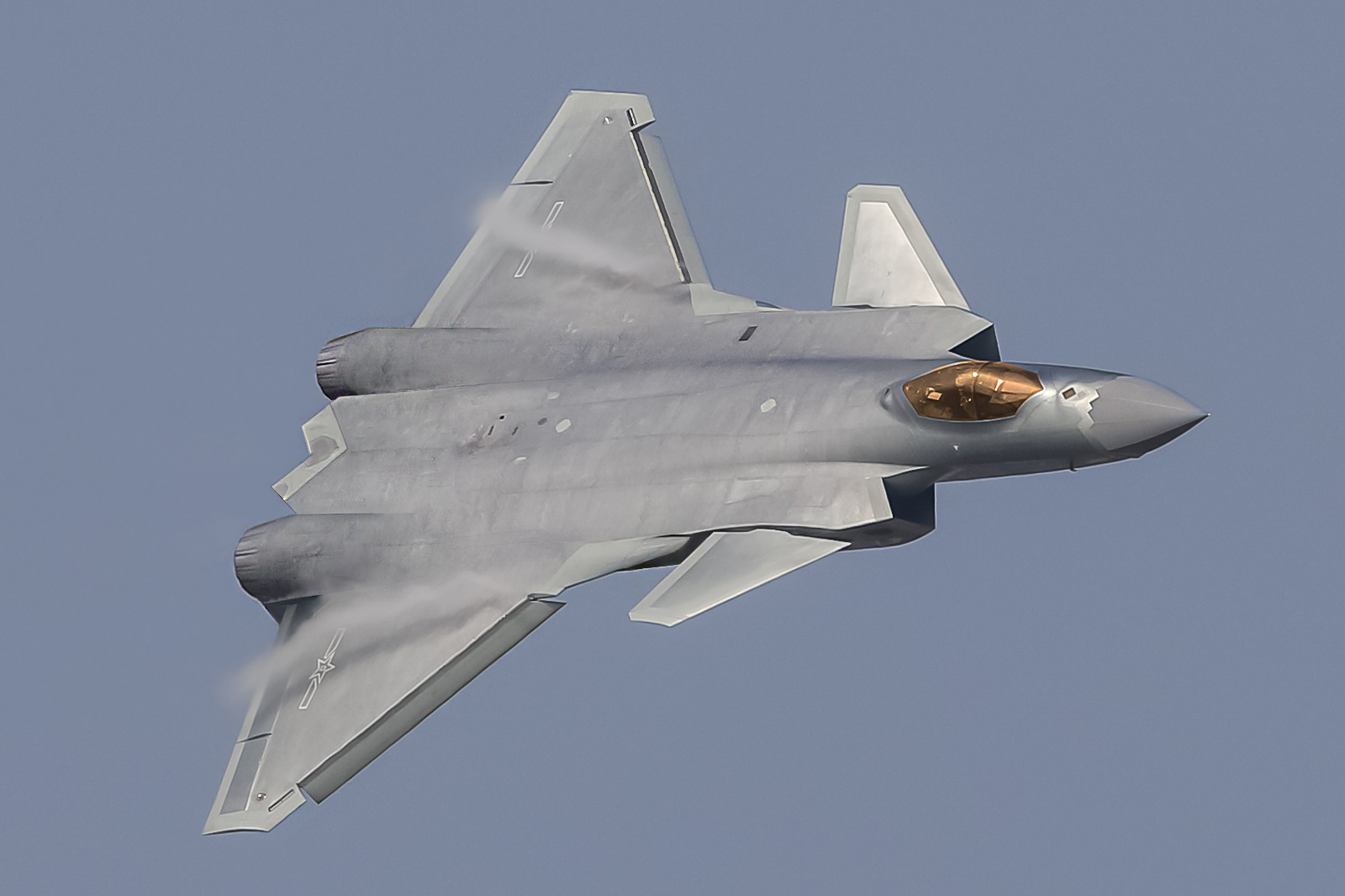 VIP Professional
The strike variant of J-20 might best be discussed further here:

Why is the J31 not simple and cheap enough? Other than having 2 engines I feel like it basically fills the same role as the F35, aka a cheaper low end 5th gen fighter. Depending on how well the J31 turns out, I could see it becoming the main fighter of the PLA. If the AF decides to get more 4th...
www.sinodefenceforum.com

I've already replied to some thoughts you've proposed in that topic.

Overall take according to this rumour:
The first production run of J-20 is powered by AL-31, although this author claims it has been modified somewhat by China which result in some minor performance improvements.
The prototype J-20 in yellow primer paint is in fact a prototype J-20A, powered by two WS-10 of some sort, totalling 14 tons of thrust each. It's not clear if J-20A will have TVC nozzles at this point. Twin WS-10 allows supercruise. In addition this resulted in increase in size of the main weapon bay which allows the J-20A to carry six PL-15. Rumours of a twin seat version is false. The rumours of 4 production lines for J-20 is false, instead they will be built at a new facility which is nearly ready. Once J-10 production ends their production line will also be switched to J-20.

Take this rumour as you will
You must log in or register to reply here.