Less " politically correct " with Russia and Syria ... and sometimes...
Click to expand...

Dude is older than the airplane, look at the way he feels his way around patting this, popping that, the guy is obviously a real pilot, very slik landing as well!

I think the USAF needs to deliver a T=50 to Central Obamastan for the AFB's full flight test series, not sure I could slow it down enough to fly through the front yard at the farm though??? yeeee Haaaaaa!

and this time it appears the Government Forces are at the outskirts of Zerbeh "for real": 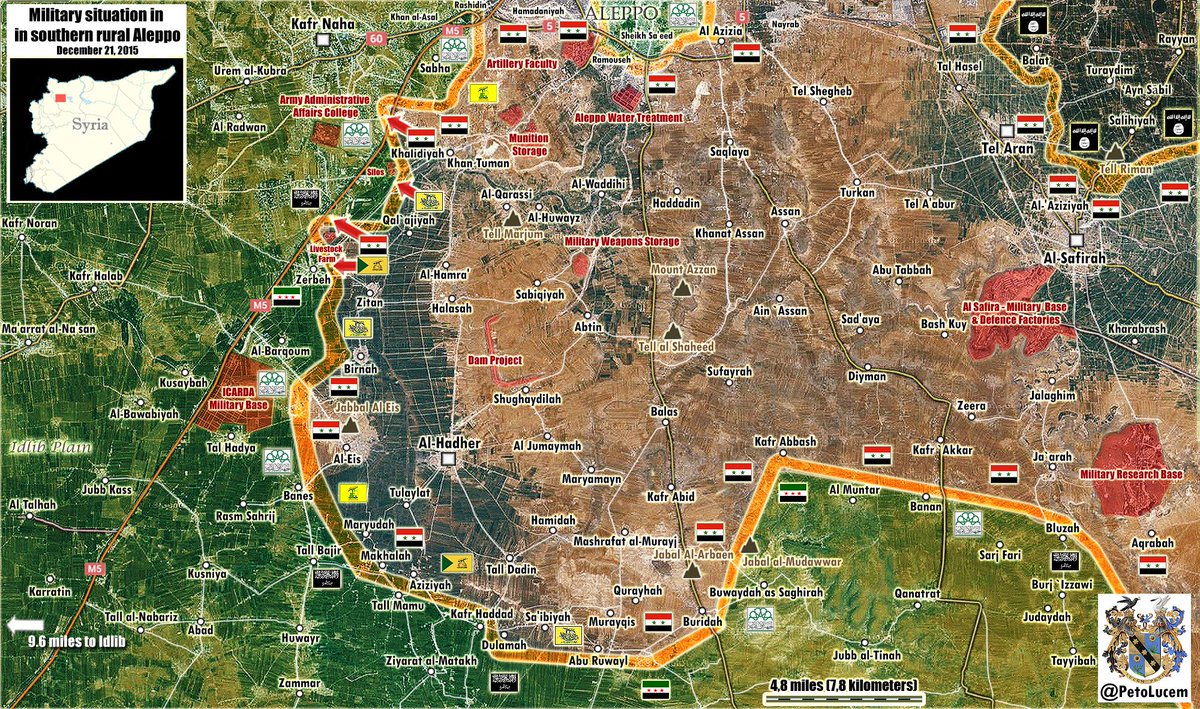 plus they cut "M5" to the north-west of Khan Tuman ... according to this newest "Peto Lucem" map (its resolution is not that high, so I looked more closely at this area and it seems to me they got into the junction I put in the red ellipse in middle-top below:

(the red point is Khan Tuman)
EDIT
and Zerbeh has been retaken by Rebels:
https://www.sinodefenceforum.com/isis-isil-conflict-in-syria-iraq-no-oped-no-policis.t6913/page-298#post-380083
Last edited: Dec 22, 2015

Bomber planes armed at Russian base in Syria

Baghdad (AFP) - Iraqi security forces advanced Tuesday into the centre of Ramadi city, which has been under the control of Islamic State group jihadists since May, a security official said.

"We went into the centre of Ramadi from several fronts and we began purging residential areas," said Sabah al-Noman, spokesman of the Iraqi counter-terrorism service

That guy who does the insane low flybys yes

... yeah I facepalm at the thought of a Spokesperson saying this before the actual fight ... but thanks, bro, hope you'll follow it (remember, you're
Top Poster Of Month

and here's what happened since then:
A UN resolution on Syria is shattered — and Russia is to blame

The U.N. Security Council unanimously passed a resolution Friday demanding that "all parties immediately cease any attacks against civilians and civilian objects" as well as "any indiscriminate use of weapons, including through shelling and aerial bombardment."

It was a blatant violation of the resolution Russia had just voted for — and an indication of how Vladimir Putin actually regards the diplomatic deals on Syria the Obama administration has been pushing.

According to local sources cited by Reuters and The Post's Hugh Naylor, the Russian bombing struck a marketplace in the heart of Idlib as well as a courthouse. Rescue workers told Reuters they had confirmed 43 dead and that dozens more bodies had yet to be identified or pulled from the rubble. While the town is controlled by a rebel alliance composed mostly of Islamist factions, it is nowhere near territory held by the Islamic State. And few would argue that a souq was not a civilian target.

Not just the Security Council's ambassadors should be embarrassed by this outrage. There is also Secretary of State John F. Kerry, who just last Tuesday emerged from a meeting with Mr. Putin saying that the Russian ruler would "take on board" Mr. Kerry's objections to airstrikes on Syrian targets outside Islamic State-held land. Perhaps Mr. Putin tossed the U.S. concerns back overboard once Mr. Kerry had left Moscow.

More likely, he never had any intention of altering Russia's policy of proclaiming war against the Islamic State while focusing its fire on the forces opposed to Syrian dictator Bashar al-Assad.

In fighting Mr. Assad's war, Russia has embraced his tactics, which include bombing not just rebel forces but also civilian installations in any area under rebel control. According to a recent U.N. report, Russian bombing has hit dozens of hospitals and bakeries in northern Syria — again, far from the Islamic State. Aid workers believe the facilities have been targeted deliberately, The Post's Liz Sly reported.

On Sunday, a new report by Human Rights Watch said that Russian and Syrian forces are using cluster munitions in civilian areas, in violation of another U.N. resolution on Syria. The report said that cluster bombs were used on at least 20 occasions since Russia and Syria began a joint offensive on Sept. 30. Reporting on attacks in nine locations documented the deaths of at least 35 civilians, including 17 children.

Mr. Kerry is touting the fact that the U.N. resolution for the first time establishes a timetable for a political transition in Syria, under which a new constitution would be written and elections held within 18 months. More realistically, it calls for an early cease-fire, which if realized could give Syrian civilians badly needed respite and allow all sides to focus on fighting the Islamic State.

For the resolution to have any meaning, however, Russia and Iran must be willing to impose its terms on Mr. Assad and drop their campaign to destroy opposition groups backed by the West. Following Sunday's events, we'll go with the assessment of Russian Foreign Minister Sergei Lavrov, who said of the new resolution: "I'm not too optimistic about what has been achieved."
Click to expand...

I had been seeing pictures from reportedly downtown Idlib during this Sunday, now I noticed

Ramadi: Iraq's flag has been raised in Hay al-Thubat after Iraqi armed forces stormed and recaptured the district.
Click to expand...