asif iqbal said:
You obviously have no understanding of naval aviation
Click to expand...

Of course i don't.
This is why ur composition on LHA:
-doesn't carry enough translort helicopters to land any full assault unit.
6 is exactly one full deck. And that's the main purpose of LHA.
If you think what LHA is combat unit first, amphibious second - weeell, in short, it isn't.
If you want combat carrier - build one, then. At given numbers, your amphib is far less effecient than goddamn Mistral, but for many times the cost.
Transport detachment of LHA is to be determined not by landing positions on deck(absurd), but (1)by composition of smallest possible assault detachment, with all its equipment, ability to rapidly support&reinforce it.
6 are laughable even for effectively operating force LHA carries onboard(no, not in one go, of course), and this is no limit to the requirements. LHDs won't serve themselves on their own, so won't do supplies, reinforcements, wounded, and many more.

-just about enough attack helicopters to ensure support, but... these aren't self-important.

-too few AEWs to ensure continious rotation for meaningful period of time. AEW helicopter=/=plane.
Because: range, fuel load&effeciency, time to loitering position, loitering altitude and so on. If you want to establish proper AEW with these - you'd need more, and the result is only meaningful if there is no other choice(i.e., plane).

-too few ASW helicopters to bother. There is literally little point of establishing ASW task force around ship with 6 helis(1...2 continious), because huge, expensive, slow and noisy LHD is more dangerous than beneficial for the whole asw force: remove the bait, let surface combatants do their job.
Whole selling point of ASW helicopter carrier is to change modus operandi of onboard rotary wing aviation, and let them perform ASW tasks by themselves. You want to double you number at least, preferably - triple it. 14-18.

-SAR: again, useful, just not by themselves.

In the end, ur setup can achieve nothing. Because it carries everything, but in token numbers.


Bhurki said:
The most important area to focus will be strengthening rotary squadrons to deter sub surface threats and to provide assault capablities for unconventional target suppression.
Click to expand... 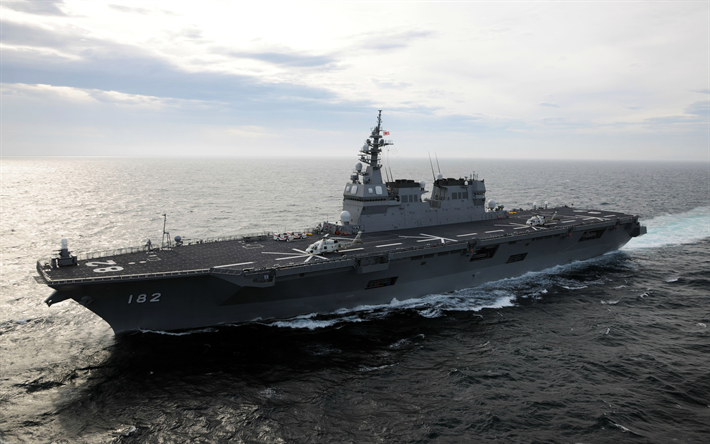 Registered Member
What's the point of such debate? Air wings aren't definitive and can be modified though time, between missions. As such it's impossible to declare any possible composition of the air fleet embarked on such vessel.

With such dimensions, I presume the type 075 will be commissioned as a capital ship, just as the Wasp class for example. One may imagine that anti-submarine missions will be relegated to auxiliary vessels like frigates or corvettes, while the HC will put an emphasis on amphibious assets.
M

Tetrach said:
What's the point of such debate? Air wings aren't definitive and can be modified though time, between missions. As such it's impossible to declare any possible composition of the air fleet embarked on such vessel.

I think you are right: this debate does not bring anything. Let us stop thinking boat by boat; what matters is the entire fleet (at least the one at sea) and the ability of each of its components to work together and effectively. So if ASIF is right about the composition of the group of helicopters, they are not necessarily all on the same ship.

Deino said:
Guys ... shall i separate the aur-wing discussion into a new thread?
Click to expand...

I don't think it would be a good idea.

I encourage the chinese navy to pursue the developpement and acquisition of S/VTOL fixed-wings aircrafts for a potential deployment on its Type 075s. Even if such ships are primary meant to operate and support amphibious operations, embarking V/STOL fighters would greatly improve the offensive capability for air-to-ground strike missions requiring range and heavy payload that helicopters can't give; It would also give essential sea but most importantly air control through air dominance that rotary wings can't offer.

In fact it has been the standard for today amphibious assault ships to support V/STOL fixed-wing aircrafts and it would be a major drawback compared to other similar vessels. The US have been operating Harriers on their AAS since the LPH-6 Guam in the 60'. The spanish Juan Carlos I design also retains a sky-jump for fixed-wings, while South Korea is considering the purchase of F-35Bs fighters to operate from its Dokdo-class ships.

Staff member
Super Moderator
Registered Member
Just on request to separate it from the general Type 075 discussion.
You must log in or register to reply here.