The Air Force plans to spend $7.86 billion over the next five years buying 80 F-15EXs, new Eagles to replace aging F-15Cs that service leaders said they did not initially want.

The service will spend $1.05 billion in 2020 to buy the first eight aircraft, and that buy will accelerate to 18 at a cost of $1.65 billion in 2021, with that rate holding steady until 2024, according to
Please, Log in or Register to view URLs content!
afternoon.

The new aircraft will be based on the F-15QA, which Boeing built for the Qatar Emiri Air Force, though it will have USAF-specific capabilities, including the Eagle Passive Active Warning and Survivability System and the Suite 9.1 Operational Flight Program software. The jet will have two seats to be flown by one or two aircrew, and will be multi-role capable, according to the justification document, or J-Book.

Current F-15C/Ds are beyond their service life “and have SERIOUS structures risks, wire chafing issues, and obsolete parts,” the justification states, adding that Air Force readiness goals cannot be achieved because of the aging aircraft’s repairs, modernization efforts, and structural inspections.

The 2020 request includes aircraft and production factory tooling, systems integration lab equipment, technical orders, support equipment, training materials, and other items needed to manufacture the jets. The gross weapon system unit cost is $131.25 million, with $80 million of that solely for the aircraft.

Maj. Gen. David Krumm, the Air Force’s director of strategic plans and requirements, said
Please, Log in or Register to view URLs content!
the F-15EX has about 80-90 percent commonality with the F-15C, and the new jets can use the same ground equipment. Even though the Air Force is bringing on the jet in a new start acquisition program, it will not take money away from the main jet of the future—the F-35, he said.

The Air Force eventually could buy up to 144 of the aircraft, with the buy continuing beyond the end of the FYDP,
Please, Log in or Register to view URLs content!
. If the cost continues at the same rate, the new fleet would cost more than $14 billion.
Click to expand...

The assumption then being a fly away cost less than F35A. However the stated cost now at 131 million is higher than that of F35 even I think by your accounting and that is without farther modifications.

TerraN_EmpirE said:
The assumption then being a fly away cost less than F35A. However the stated cost now at 131 million is higher than that of F35 even I think by your accounting and that is without farther modifications.
Click to expand...

link to your "the stated cost now at 131 million ... and that is without farther modifications."
:
(please answer this with url)

it's "The gross weapon system unit cost is $131.25 million, with $80 million of that solely for the aircraft." 29 minutes ago
and I'm asking in this context

TerraN_EmpirE said:
View attachment 51388
So @Jeff Head @Jura @Air Force Brat @Brumby
Here is the plan.
For 5 Years The USAF buys 80 F15X 8 starting FY20. 18 per year there after. As a result the USAF cuts back it's F35A order to 48 per year. Originally the plan was 54 per year.
The math works to 3 F35 for every 1 F15X.
Oh and the price tag. The 8 F15 that will be delivered are off the F15QA line they will be in QA configuration and be used to develop the final product F15CX F15EX. Cost of said fighter? $131 Million dollars estimate.
Click to expand...

... was just curious what's in the rest of that page: 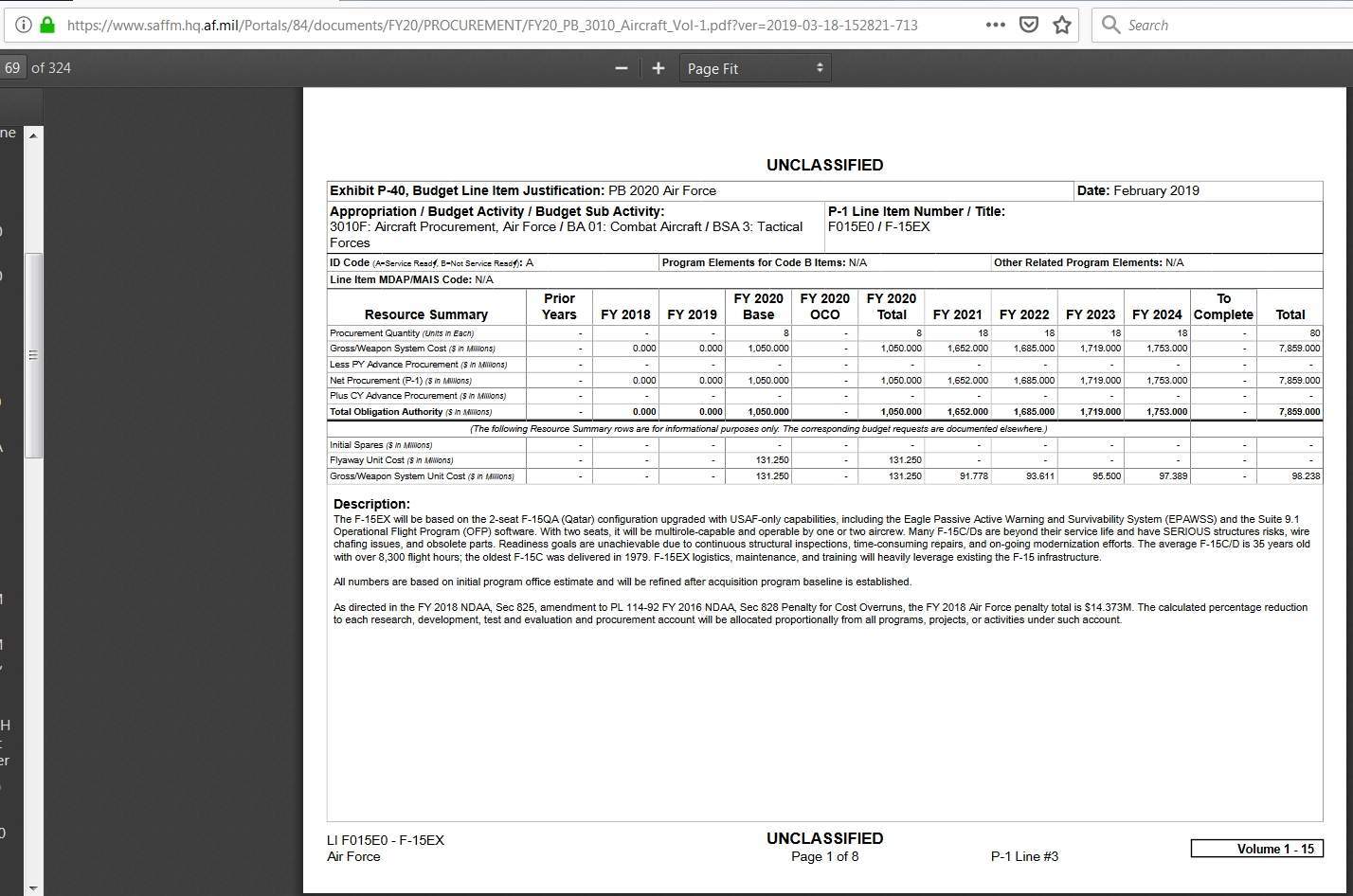 TerraN_EmpirE said:
Attachment 51388 is pulled from the request with 131 million listed as both gross and flyaway
Click to expand...

I revisited the numbers as per your attachment relating to FY2020 and beyond. You will note that per unit cost is around $92 million and successively adjusted for inflation at 2 % annually. If I take the FY2021 and discount the unit cost at 2 % inflation, I get a starting base price of $89.98 million per unit for FY2020. This is comparable to the most recent F-35A negotiated pricing of $89.2 million for Lot 11. The problem is that FY2020 budget includes start up non recurring cost like tooling et al that inflated the unit pricing.

there's an F-15X part inside (LOL guess what it says)
What aircraft does the US Air Force need to beat China and Russia? This new study has an answer.
Please, Log in or Register to view URLs content!

Should the Air Force buy the F-15X from Boeing?
Click to expand...

In any event the point of the F15X was supposed to be filler, as the NGAD is down the line and F22 line is closed up tight. People seem to be pushing it as the replacement for the F35, but F35 despite its problems can be solved with time.
F35 was and is the Low end of the high low mix. Low as in Low altitude as in air strike. F15, F22 And F-X are the high as in higher altitude for air superiority.
Wow I pretty much agree with this Center for Strategic and Budgetary Assessments study assessment.

So why did CAPE push so strongly for buying additional fourth-generation jets?

The official pointed to two major factors. First was the need for additional capacity.

The average age of the F-15C/D fleet is 35 years, with some aircraft nearing the end of their service lives. FY20 budget documents note “SERIOUS structures risks, wire chafing issues, and obsolete parts” and add that “readiness goals are unachievable due to continuous structural inspections, time-consuming repairs, and on-going modernization efforts.”

CAPE considered accelerating procurement of the F-35, which in FY20 is limited to 48 units. However, its cost analysis — which pegs the cost of each F-15X at about $90 million for the aircraft and spares — found that F-35 operations and maintenance costs outweigh that of fourth-gen planes like the F-15, the official said.

The second argument in favor of buying new fourth-generation planes is that the national defense strategy establishes the need for both stealthy tactical aircraft that can penetrate into a contested zone, as well as planes with large payloads that can launch ordnance from standoff distances, the official said.

Out of the Air Force’s inventory, the F-15 in particular has that as a selling point. Of all the service’s fighters, it can carry the largest payload.
Click to expand...

TerraN_EmpirE said:
Attachment 51388 is pulled from the request with 131 million listed as both gross and flyaway
Click to expand...

"The official said the CAPE estimate for the F-15X is $90 million a copy."