The unmanned trimaran was open to the public for the first time. Apologies for the small images.

Under the ageis of "Leading in Green Shipping Technology", the maritime department organized the general public to visit China's first 100-ton unmanned boat. The boat project has been in development since the end of 2015, and it successfully completed its first maritime autonomous navigation test in June this year. It is the largest unmanned boat in China and can function normally up to sea state 5 and sail safely in sea state 6. It has an integrated low-voltage hybrid electric propulsion system.
Click to expand... 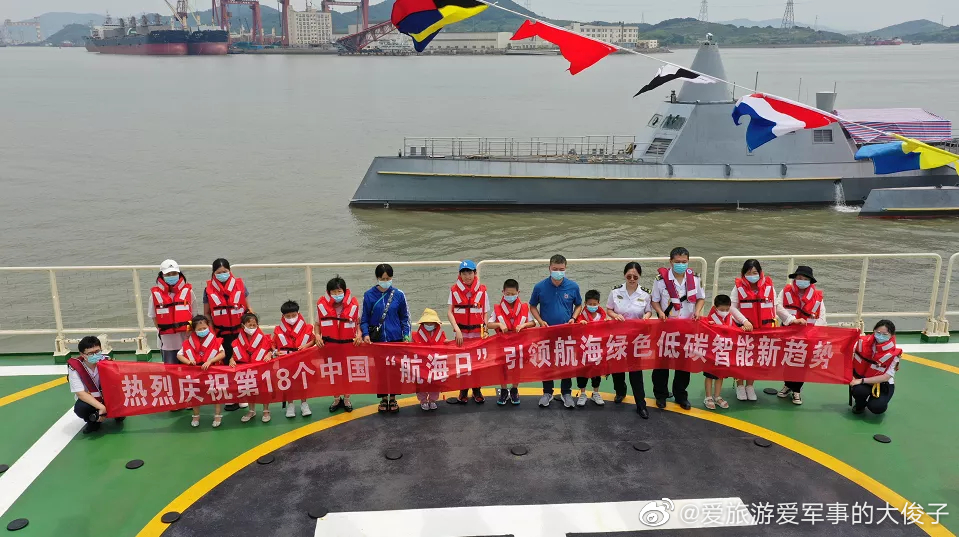 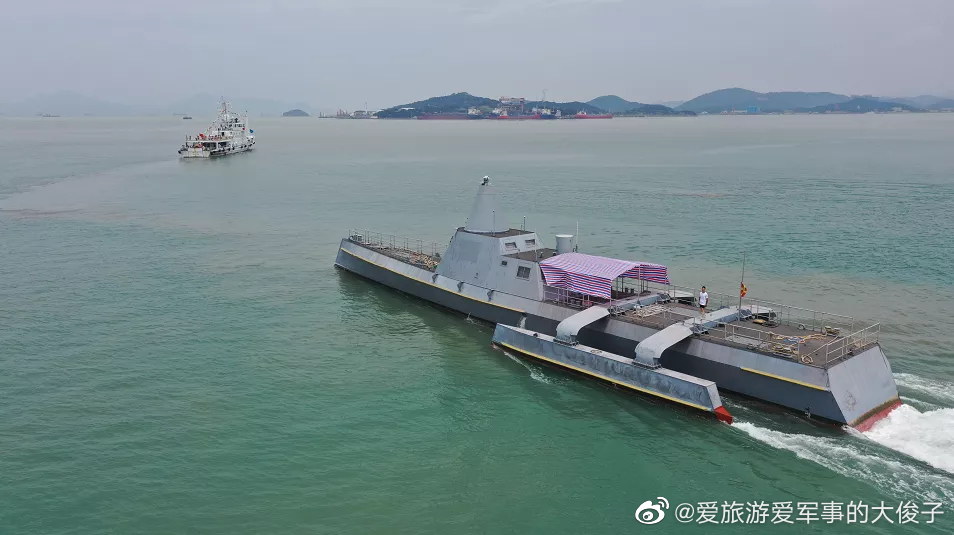 dingyibvs said:
Yeah, I wonder what happened to that idea. Such a ship can just surface, fire a bunch of ASuW or AShW missiles, then submerge and they'd be completely protected unless an enemy warship penetrates close enough to fire torpedoes. With no acoustic deadening or sensors needed, the cost can be kept relatively low as well. Given the simplicity of its role it can perhaps even be unmanned, further keeping cost down.

Perhaps a future CSG would only have a couple 055 type ships escorting the carrier, and together with the carrier air wing they'd primarily provide anti-air capabilities with secondary multi-role capabilities. Almost all other assets would be used for reconnaissance, targeting, and ASW roles as the arsenal ships would be the ones carrying all the ASuW and AShW missiles.
Click to expand...

If I had to guess, it's because ships need people on-board to keep the engines running, etc. Maybe the VLS are self contained, but the equipment to run/target etc the missiles might need people as well.
A

By observing the concept photo, I believe that this concept LUSV would have 32 VLS cells and at least 5 machine guns onboard. The communication system onboard the LUSV seems pretty simplistic, as well for the design of the hull itself, as this project is meant to be based on commercial shipping vessel hulls(?) Displacement is projected to be around 1000-2000 tons, and 61-92 meters in length.

Quoting from the USNI News from last year on said project:

The Navy wants LUSVs to be low-cost, high-endurance, reconfigurable ships based on commercial ship designs, with ample capacity for carrying various modular payloads—particularly anti-surface warfare (ASuW) and strike payloads, meaning principally anti-ship and land-attack missiles. Although referred to as UVs, LUSVs might be more accurately described as optionally or lightly manned ships, because they might sometimes have a few onboard crew members, particularly in the nearer term as the Navy works out LUSV enabling technologies and operational concepts.
Click to expand...

In post #41 in this thread, China has started the construction of a UCSV technology demonstrator in early June.

Comparing the specs of both UCSVs, I believe that:

1. China's UCSV would be more viable for patrolling the littorial waters of China and in the near seas, i.e. within the First Island Chain. China's USV can serve as both ASW units, and/or picket duty located on the outer edges of the Nine Dash Line and or in the general direction facing the Ryukyu Islands, Japan and South Korea.

2. The US' LUSV would be capable for both littorial and high seas operations. In hindsight, the LUSV is projected to have similar number of VLS cells to a typical frigate. Of course, the machine guns on LUSV can only be used for close range self-defense against enemy speedboats or pirate sampans, but operating under proper cover of larger allied warships would make her a potent force multiplier.

My idea is this - China should pursue a full-fledged Future Unmanned Combat Surface Vessel (FUCSV) design for the PLAN.

The control and operation of the weapon systems onboard FUCSV should have the capability to switch between single drone mothership (such as further R&D of the military version Zhu Hai Yun) and individual 054As, 052Ds and 055s, depending on situational and operational requirements. Therefore, crew number onboard the FUCSV can be reduced to a minimum (preferably around 40-50, half of Mogami's 90), as they are only responsible for the daily upkeep, underway maintenance, wartime damage control, and handling basic operations of the vessel during emergency situations.

Each 054A, 052D and 055 can control and operate 1 or 2 FUCSVs, whenever they are not being controlled by the drone motherships, thus acting like a "wing-ship" of sorts to the major surface combatants.

The UVLS onboard the FUCSV can carry a wide variety of AAM, AShM and ASW missiles like those on the larger surface combatants. By increasing the number of UVLS that any particular task force or strike group can employ on the battlefield, they are very potent force multipliers. For self-defense, the FUCSVs can employ either one or two HQ-10s and/or Type 730 CIWS. Torpedoes onboard too can be employed for during ASW operations.

Slightly deviating off topic here, but I understand that arsenal ship concepts are very intriguing and can perform the same roles as these FUCSVs on a much larger scale. However:

1. Losing one ship carrying 48 VLS has much less negative effect on the firepower of the task force or task group than losing one ship carrying 200-300 VLS;
2. Building FUCSVs also consumes much less energy, material, time and complexity than arsenal ships;
3. The FUCSVs can be mass-produced;
4. More shipyards can handle the contruction of the FCUSVs, including those with lower technical knowhow, experience and less capable shipbuilding facilities;
5. Versatile, since larger numbers meant that they could be allocated and moved around theaters and battlefields much easier; and
6. Easier upkeep, repair and maintenance.

In effect, FUCSVs are mini arsenal ships.
You must log in or register to reply here.