AkelaFreedom said:
Well, that means high temperatures are not an obstacle.
In the larger picture, it is clear that these are rectangular hatches and their color does not match the one on the antenna material, so I suppose that there is something else.
View attachment 55894
Click to expand...

The grey color suggests radio wave transmitting material. The size is not large enough for radar arrays but good for other purposes (e.g., satellite communication).
The nose cone of WZ-8 is also a little bit too small for radar, and also the high temperature making it a less preferable place.
Thus, the front top probably hosts the SAR radar arrays, and the flipped position during high-speed cruise allows WZ-8 to scan the earth surface.
Last edited: Dec 13, 2019

Registered Member
Here is a summary of discussion with Akela Freedom:
WZ-8, as the name suggests, it is a reconnaissance drone. As there is no sign of camera window, radar is its primary equipment.
Usually, radar is housed in the nose cone, but WZ-8's is a little bit too small (and too hot during the flight). The belly has little room either with the landing gears in place. Also, it is relatively flat, allowing little angles for wide-range radar scan.

The most likely place to install the radar on WZ-8 is the front top, where the no-step signs are. The curve makes it possible to install a side-looking radar.

The radar is probably SAR. Such a radar requires the plane to fly as straight and level as possible, which is consistent with the mission profile of the WZ-8.

To use the radar, WZ-8 needs to flip upside-down during the high-speed cruise. This actually looks pretty cool.

As a drone, of course, WZ-8, can easily fly upside down. The vertical stabilizers provide normal control in subsonic gliding, and help WZ-8 ride shockwaves at supersonic speed. A brilliant design for both aerodynamics and tasks.

taxiya said:
I don't think you can reach this conclusion from the paper you attached. That paper indicated "rocket engine start at the release from the carrier aircraft and rocket engine shut down at the end of mission". Neither this diagram nor any texts indicated separate boosters.

It is not appropriate to use X-15 to support the "booster" theory either. X-15 is designed with a top speed of Mach 6.7 which is hyper-sonic in the same class as DF-17. WZ-8 is unlikely designed for hypersonic by looking at its shape. Keep in mind, the national parade presenter never said hyper-sonic, but only high speed, maybe around Mach 2 or 3. Its big wing body gives it a good gliding capability to return at the end of rocket burn, shown by the diagram in your post. The big wing span prevent it to go hyper-sonic which in term make boosters unnecessary.
Click to expand...

My sole point was that the shape of WZ-8's booster rockets may look like the conformal external tanks of X-15A-2.
Regarding the existence of booster rockets, the heat-resistant linings under WZ-8's wings suggest their positions.

The published flight mission profile support the existence of booster rockets because the transition from steep climb and level cruise is not "smooth", probably due to the different thrust levels between solid booster rockets and liquid main engines.

Here is some more direct evidence of booster rockets from a published National Science and Technology Progress Award record:

AkelaFreedom said:
Thanks. So my assumptions on the presence of a cone were correct. It would be nice to find images of booster / acceleration rockets, then I could create them in 3D and add to the model.
Click to expand...

Obviously, the use of disposable tail cone can reduce the drag on WZ-8 before its main engines start. However, what makes it really indispensable is probably its mitigation of the exhaust interference between two booster rockets and the risks in WZ-8's separation from the carrier plane and booster rockets. This is actually a major research topic during the preliminary design phase, the outcome of which earned the team a national award back in 2012.

Check out the payload. 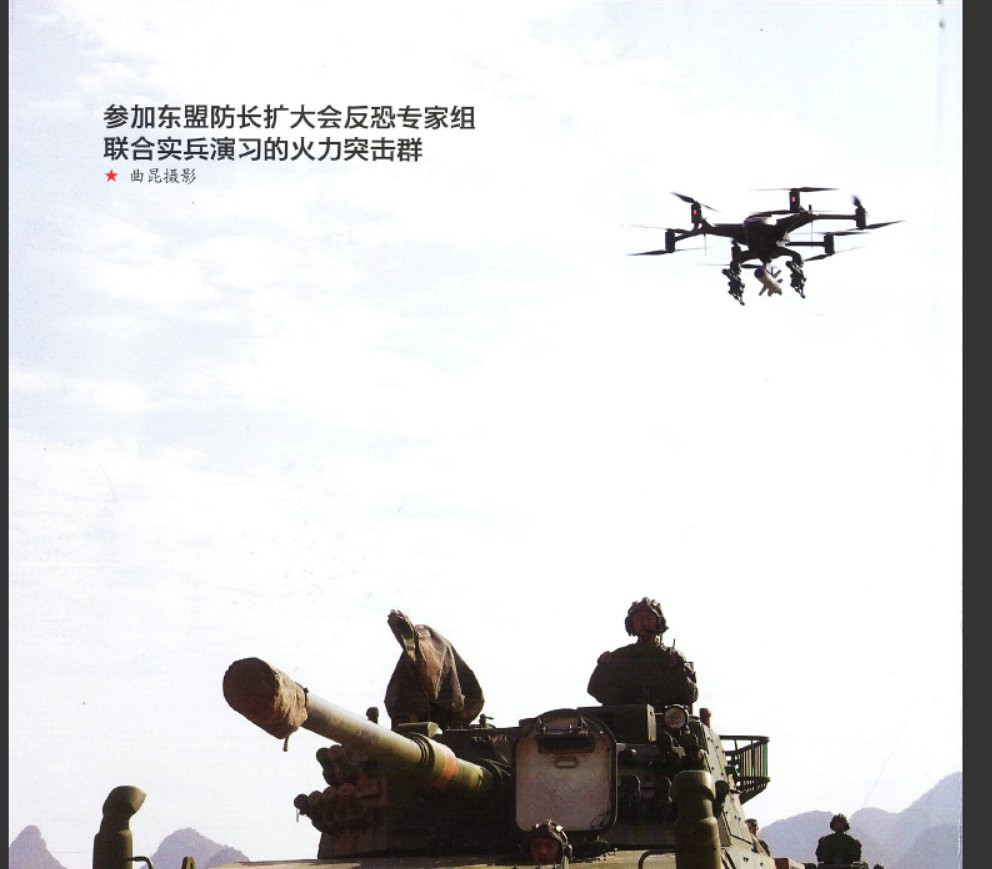 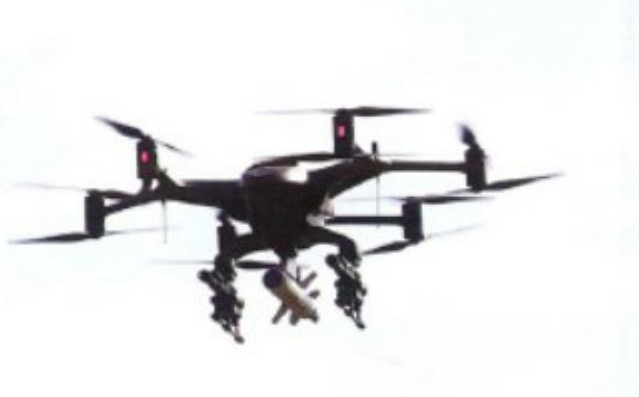 by78 said:
Check out the payload.

I assume that missile will be drop and release activated type. Otherwise it would've drag and took that drone with it. Anyway, cool concept to find hidden tanks or anti tank groups in urban or dense forestry areas.
T

xyqq said:
My sole point was that the shape of WZ-8's booster rockets may look like the conformal external tanks of X-15A-2.
Regarding the existence of booster rockets, the heat-resistant linings under WZ-8's wings suggest their positions.
Click to expand...

To support that point in bald, you must prove that the following extraction

is related to these award.

Are they? I have read the article (extractions) in full, I did not see it mentioning the rewards, nor related works that may be linked to the rewards. You can't pick bits and pieces anywhere arbitrarily and assume them being related and draw conclusions. You are welcome to show what I am missing.

Note, my disagreement was only about booster.
Last edited: Dec 17, 2019

More photos in the link above.

The October 1 parade this year in Beijing, which allows the People's Republic of China to celebrate its 70th year of existence, was a fairly unique opportunity for observers to see the country's technological advances in aerial drones.

Indeed, no less than 9 different drone models grouped into 3 formations paraded along Chang'an Avenue, in front of Tian'anmen Square, and this ranges from small reconnaissance and target designation machines to drones of classic ground attack, passing by the mysterious supersonic reconnaissance drone WZ-8, kept in secret for a few years now, as well as the GJ-11, a stealth flying wing drone developed on the basis of the Lijian prototype (known also known as "Sharp Sword").

All these devices have already entered active service in the Chinese armed forces, at least according to the official statement. From what it could be identified, some of these drones are deployed today in the 10th bomber division of the Chinese Air Force, based on the east coast of China, and in the 82nd group of armies of the army at the command of the theater of operations of the center.

The navy, for its part, also presented for the first time its UUV, intended for underwater reconnaissance and surveillance. 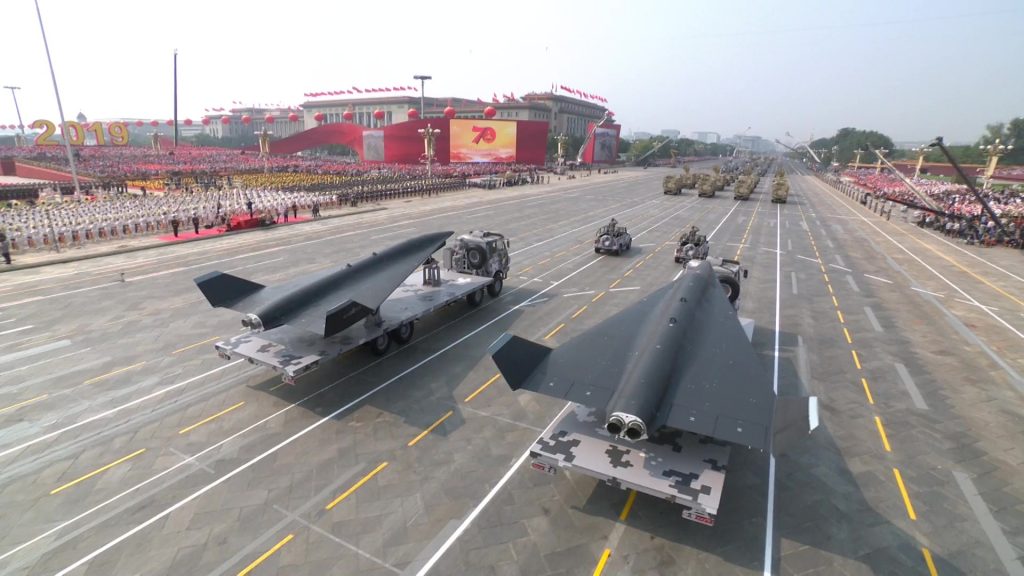 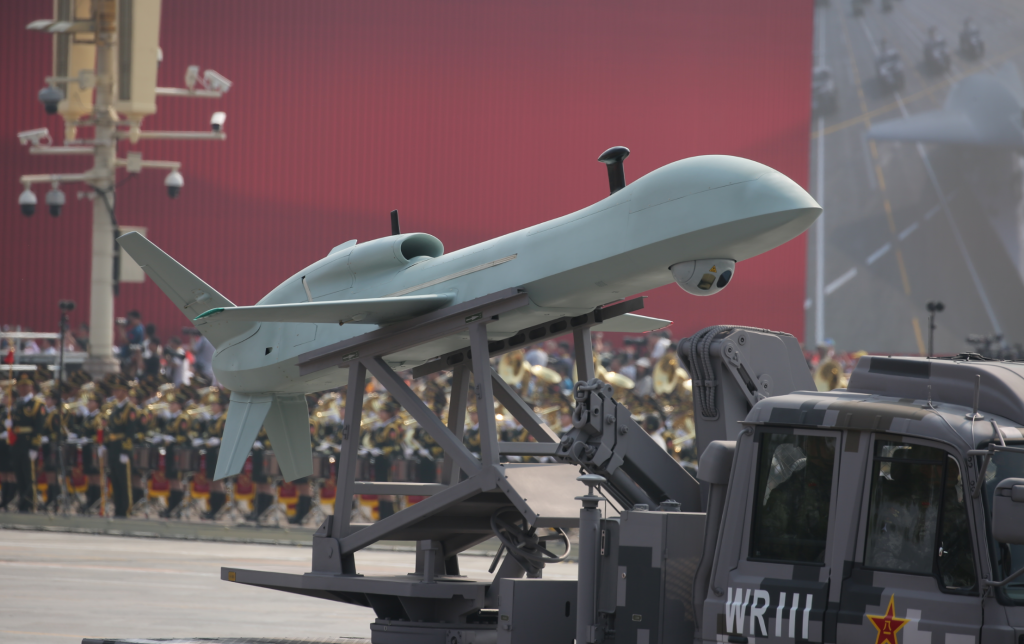 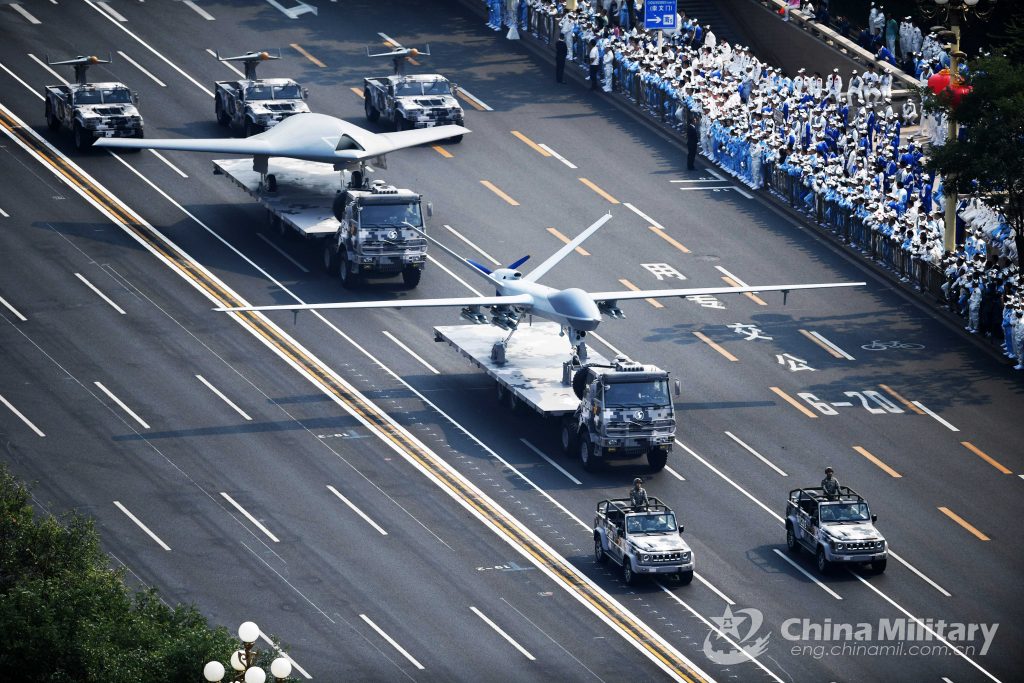 If this public presentation seems surprising at first glance, both from a qualitative and quantitative point of view, it is perhaps only part of the iceberg of what the Chinese wanted to reveal for the moment.

Less than a month after the big parade, it was nearly 3,000 km from Beijing, in the Malan air base where a unit specialized in training drone pilots is stationed, that a strange event took place.

According to satellite images dated October 30, no less than twenty drone models lined up on the tarmac of the air base located in Xinjiang province, as if they were in a static exhibition on the ground. .

We can easily distinguish several drones that were present in Beijing a month before, but also others that have remained in the shadows so far. We can cite for example the famous "Divine Eagle", very characteristic by its double fuselage cell, which would be an airborne detection and command drone (AEW & C). Or the WZ-7 / EA-03 strategic surveillance drone, easily recognizable thanks to its rhomboid wings, which was deployed massively in Tibet during the Doklam conflict in 2017, and this year in Jilin province on the border with the North Korea.

The circumstances of this meeting unfortunately remain unknown to this day. Some comments suggest the possibility that it is a “drone fair” intended for a few wealthy customers in the Middle East, but this seems to be implausible given the presence of certain rather strategic models, such as the WZ-7, the WZ-8 supersonic and the divine Eagle.

On the other hand, the fact that the drones of different manufacturers (AVIC, CASC, CASIC, NORINCO, Tengden…) and of categories (fixed wing, rotary wing…) are present in the same place and at the same time, it is more like an internal presentation intended for senior political and military officials, but this is to be confirmed.

In the meantime, an identification attempt based on the only satellite image has been made (see image above), but given the resolution, it should be taken with caution.

taxiya said:
To support that point in bald, you must prove that the following extraction

is related to these award.

Are they? I have read the article (extractions) in full, I did not see it mentioning the rewards, nor related works that may be linked to the rewards. You can't pick bits and pieces anywhere arbitrarily and assume them being related and draw conclusions. You are welcome to show what I am missing.

Note, my disagreement was only about booster.
Click to expand...

I feel like the climb won’t be straight with booster rockets under the wings.

Unless the thing is designed to fly upside down like the space shuttle consistent with the top sensor placement.

You also can’t be sure that sensor is a radar because there could be a window or door somewhere. Cameras nowadays can do pretty well at that altitude.
T

localizer said:
I feel like the climb won’t be straight with booster rockets under the wings.

Unless the thing is designed to fly upside down like the space shuttle consistent with the top sensor placement.

You also can’t be sure that sensor is a radar because there could be a window or door somewhere. Cameras nowadays can do pretty well at that altitude.
Click to expand...

are you replying to xyqq but instead quoted my reply to xyqq? It was xyqq who proposed the idea of "top sensor placement". I personally disbelieve that arrangement because what is that sensor going to see? Not the ground and sea target but sky?

I agree with your assessment otherwise.
You must log in or register to reply here.