Registered Member
SAIC has its own shipping division with RO-ROs and is looking with Jiangnan to build more. 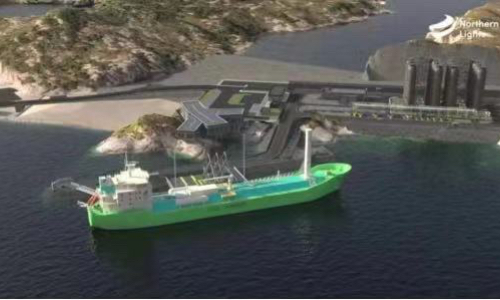 A Chinese shipyard has begun building two of the world's first 7,500 cubic meter liquid carbon dioxide vessels for a Norwegian company, which will be used in a European carbon dioxide capture and storage program to help advance Europe's overall carbon neutrality goals, the Global Times learned from the shipyard on Monday.

Dalian Shipbuilding Corporation Limited, a subsidiary of China State Shipbuilding Corporation Limited, which is set to build the two vessels, told the Global Times that the liquid carbon dioxide vessel specializes in marine carbon transport and storage, with an overall length of about 130 meters and a width of 21.2 meters. The vessel has a structural draft of 8 meters, and is registered with DNV.

The Global Times has learned that the vessels will be used in the European CO2 capture and storage program after construction. The vessels will collect CO2 generated by European industries, transport it to the CO2 receiving terminal on the west coast of Norway, process it and inject it into the subsea at a depth of 2,600 meters for permanent storage, thus reducing CO2 emissions in Europe and promoting the ultimate goal of carbon neutrality in the continent as a whole.

The ship type in this project is designed and completed by Dalian Shipbuilding with full independent intellectual property rights, according to the shipyard.

Registered Member
CSSC Qingdao gets a whooping 10 vessel newcastlemax size order - about 200000 DWT each, these are amongst the largest bulk carriers.

A Chinese shipbuilding firm has started building two 7,500-cubic meter liquefied carbon dioxide carriers for Northern Lights, a Norwegian carbon capture and storage project.
The Dalian Shipbuilding Industry Co., Ltd., a subsidiary of the China State Shipbuilding Corporation Limited, has independently designed and developed the vessels for liquefied carbon dioxide shipping.
Each ship is about 130 meters long and 21.2 meters wide. The first ship is scheduled to be delivered in the first quarter of 2024.
The ships -- designed to run on dual-fuel consisting of liquefied natural gas (LNG) and light diesel oil, respectively, -- are commissioned to be used for the European carbon dioxide capture and storage program. They will collect carbon dioxide produced by industries in Europe and transport it to the carbon dioxide receiving terminal on the west coast of Norway for processing, before injecting it into the seabed for permanent storage at 2,600 meters deep.
M

You've been on this forum for how long? You should know to put some English explanation just don't post it at all.

MortyandRick said:
You've been on this forum for how long? You should know to put some English explanation just don't post it at all.
Click to expand...

It is a list of % of contract of various ship type, China vs South Korea.
D