That’s how transparent armor works layers that are sacrificed to buy time to get the vehicle out of the hot zone.
Click to expand...

Is this only applicable to transparent armor or to armor in general?
Let's say a lightly armored vehicle?
Click to expand...

Composite armor In general with the counterpoint that density hits a point of futility. That can mean body armor or transparent armor as practical. So a ballistic vest or window will fail after a number of repeated shots to the same panels. The number of shots is though fairly ridiculous depending on protection level a BR7 ballistic glass block like those used in VVIP rides. Like the armored Hongqi L5 that the President of China cruises around in will be rated to about 50 shots of conventional 5.56x45mm.
After that the inner layer has shattered and if it’s not all ready penetrated it’s showering the occupant with shards of glass and about to fail. Body armor is even less because of issues of area of protection (IE you generally have gaps in the armor where you move and don’t have such overlaps of material A to Material B) So where one shot won’t penetrate two won’t either but by beyond this point if you are still taking shots why are you still standing there?
For your example a Light armored vehicle, the view ports will fail first. This as as you can only make ballistic glass so thick before it’s visual distortion makes it impossible to see out. Then goes lighter armored elements. Tracks or wheels, Engine and automotive, Weapons things that make it no longer mission effective IE a mission kill.

Tanks however are the kings of dense. Imagine a vehicle the size of a Full size Pickup truck but 20 times as dense. That’s a Tank. The composite armor is so dense that it’s beyond impractical. But even then if you get one that is just a sitting target and keep hitting it even if it’s proofed against the round used (more practical for tank shells beyond impractical for small arms) eventually it will fail it’s just a question of how many shots and what fails first. Generally the weak point that goes first on a AFV will be the view ports and optics followed by weapons, automotive and engine. It’s happened before, British Challenger and American Abrams tanks drove in to ambushes where in they took huge numbers of hits from everything you can think of short of a tactical nuclear strike. From Bombs to sling shots. In some cases the tanks were disabled and some of the fire power then used on them wasn’t just opposing forces but was allies trying to prevent the enemy from getting a prize. In some cases the vehicle did eventually start burning which is what killed it. Yet in a few cases the Crew remained perfectly safe inside even as it was fired on like target practice.
D

Registered Member
Some renders and new photos of the next gen 8x8 ifv and assault gun, photos from
Please, Log in or Register to view URLs content!

It appears to be a turret design for an IFV. From top-left clockwise, "complete turret assembly", "turret", "cannon", "turret motor/drive(?)". The last caption is covered by the watermark so I can't be sure of the translation.

@RichardGao, does this have any significance? 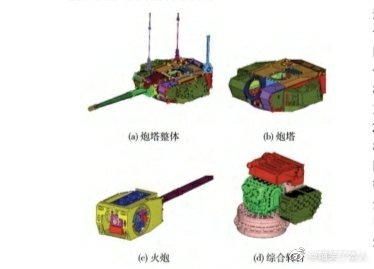 Dishi said:
Some renders and new photos of the next gen 8x8 ifv and assault gun, photos from
Please, Log in or Register to view URLs content!

Here's an older link and some pics of the same vehicle from
Please, Log in or Register to view URLs content!
.

From the pics, we can see there are a couple of differences between this new prototype and the Type 11 assault gun currently in service with the PLA. First is the obvious turret with its massive bustle, probably derived from Type 15/VT-5 experiences, and from the link I posted above it's rumored to be remotely controlled. Second is the Engine placement; the Type 11 assault gun has it's engine in the rear (bet some of us never noticed it), while this new prototype should have it at the front just like Type 08 IFV. That engine placement also means the new prototype can have a rear door instead of side door like in Type 11, and curiously for PLA vehicle it most likely also has a rear ramp. The last detail for me would be the improved armor.
R

by78 said:
It appears to be a turret design for an IFV. From top-left clockwise, "complete turret assembly", "turret", "cannon", "turret motor/drive(?)". The last caption is covered by the watermark so I can't be sure of the translation.

@RichardGao, does this have any significance?

I'm very sorry but I dunno either, cause I can't find the original paper. Probably it is still undisclosed, or it's something published locally.
R

If the reason is for frontal body protection in heads up position wouldn't a squarish hatch give more protection and potentially easier to get in/out of?

It might also be the production ease, especially for older cast turrets, but given that many modern Chinese and Russian vehicles have welded turrets it shouldn't be that hard to change the design before production.
P

nice video, what I’m most impressed by though are the PLA soldiers they interviewed, and especially the more senior guy that was presenting the vehicle. They seemed confident and at ease, where in previous examples a lot of the PLA interviewees were very stiff and wooden.
D

Oh yeah, do you think ZTL-11 has a lock-on-target and fire-on-the-move ability? the crew seems to move really slowly during the training in the video, so I think It doesn't. I wonder if the new prototype assault gun is designed with remedying this deficiency in mind.
R

dankris said:
Oh yeah, do you think ZTL-11 has a lock-on-target and fire-on-the-move ability? the crew seems to move really slowly during the training in the video, so I think It doesn't. I wonder if the new prototype assault gun is designed with remedying this deficiency in mind.
Click to expand...

Yes, it has. The low speed is simply for higher accuracy, Type 99/96(A)s also often perform such acts. As for the new one, I'm sure the electronics are also updated. (for example electronics like those on the Type 15)
You must log in or register to reply here.