Coalescence said:
You've shown him at which rank of the Lobster hierarchy he's placed on, "The Bottom Feeders".
Click to expand...

Ill chose to be the sacrificial lamb here and watched this fucking thing. Its even more brain-dead then your guess, only about 5 min of the 10 is about China. He says America is special because of freedom over and over again, doesn't even mention standard ChInA bAd talking points, at one point he talk about America's "wealth of infrastructure" which really shows how out of touch he is. Everything else is bitching about racism like he always does.

Jordan Peterson is like Trump but for stupid people. Poor people who has no actual concept of wealth think Trump is what it means to be rich. Stupid people with no concept of high learning think what he says is intellectual enlightenment. 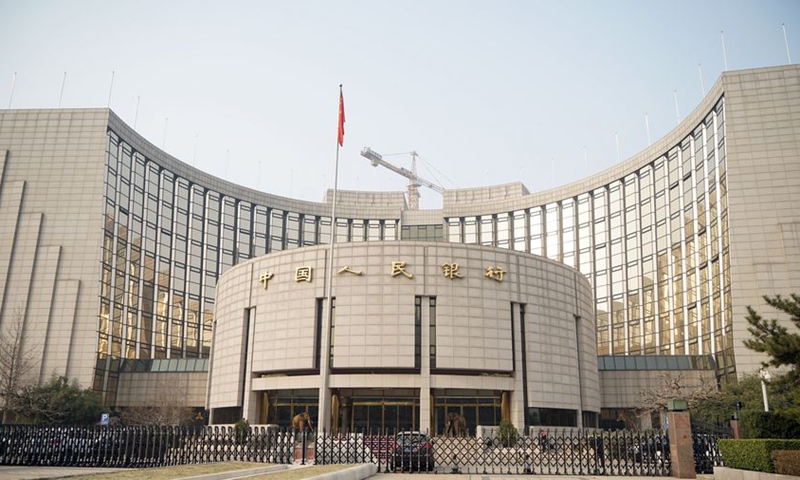 Photo shows the headquarters of the People's Bank of China. File photo: Xinhua

The IMF lifted the Chinese yuan's weighting in the Special Drawing Rights (SDR) currency basket to 12.28 percent from 10.92 percent in its first regular review of the SDR valuation since the Chinese currency was included in the basket in 2016, the People's Bank of China (PBC), the country's central bank, said in a statement on Sunday, in a major show of growing global recognition of the Chinese currency and the Chinese economy.

As China further steps up efforts to promote the internationalization of the yuan and the opening up of its financial market, the Chinese currency is expected to play a rising role in global payments, settlements and foreign exchange reserves over the long term, Chinese experts told the Global Times, following the IMF's move.

The adjusted weightings came after the IMF Executive Board concluded its quinquennial SDR valuation review. The updated basket weights will come into effect on August 1 this year, with the next SDR review scheduled be concluded before the end of July 2027, according to the IMF.

The last SDR valuation review was concluded in 2015. Under the existing SDR valuation method adopted by the IMF Executive Board, the currency basket is reviewed every five years unless developments in the interim justify an earlier review.

"Directors broadly acknowledged the progress made on financial market reforms in China, while calling for additional efforts to further open and deepen the onshore yuan market, with some directors also stressing the need to further enhance data transparency," said the IMF.

The PBC said in the statement that it will work with other financial departments to continue unswervingly promoting reform and the opening up of China's financial markets, and to simplify the procedures for foreign investors to invest in the Chinese market, enrich the range of investable assets, strengthen data disclosure, and improve the business environment.

"We will continuously improve the convenience of investing in the Chinese market, creating a more favorable environment for foreign investors and international institutions," the central bank said.

The SDR is an international reserve asset created by the IMF in 1969 to supplement its member countries' official reserves. On October 1, 2016, the IMF added the yuan to the basket of currencies that make up the SDR, a milestone in the integration of the Chinese economy into the global financial system.

The IMF's move came as the yuan has acted as a stabilizer during recent global volatility amid the impacts of COVID-19, the Russia-Ukraine conflict and high inflation, experts said.

The yuan's raised weighting will enhance the role of the Chinese currency in global markets and further accelerate its internationalization, said Dong Dengxin, director of the Finance and Securities Institute of the Wuhan University of Science and Technology.

The weight of the yuan in the SDR basket still has a lot of room for improvement, and it is expected to increase steadily, as the currency's role in global payments and settlements, foreign exchange reserves, investment and financing becomes more and more important, Dong told the Global Times on Sunday.

As of the end of 2021, the yuan was fifth in the Currency Composition of Official Foreign Exchange Reserves (COFER) after the US dollar, the euro, the yen and the pound, according to the IMF data.

Guan Tao, chief global economist at BOC International (China) Co and a former senior official at the State Administration of Foreign Exchange, told the Global Times on Sunday that the yuan's higher weighting in the SDR basket mainly reflected the increase of China's exports, including goods and services, foreign exchange reserves held in yuan-denominated assets and foreign exchange transactions using the Chinese currency in the global markets over the past few years.

There are two criteria - export and freely usable - that guide IMF decisions on the weighting of currencies in the basket. In terms of exports, Guan said that China's contribution to the world's trade, especially during the past two years under the disruptions of the COVID-19 pandemic, showed a stellar performance, reflecting the strong resilience of the country's supply and industrial chains.

China's total trade topped $6 trillion for the first time in 2021, as the country, a global forerunner in containing COVID-19, continued to see solid recovery over the past year.

The Chinese currency retained its spot as the fifth most attractive currency for global payments by value in January but with a larger share as a global payment currency, according to SWIFT, the global provider of financial messaging services.
T

People who will never come back to train a new generation of doctors. That is a damn lost.

mossen said:
China's TFR is closer to 1.1 per woman.
Click to expand...

Please, Log in or Register to view URLs content!
This site take their numbers from the world bank.

mossen said:
China's TFR is closer to 1.1 per woman.
Click to expand...

Where do you get that figure bud.
H

Registered Member
Dropping Zero covid is going to be a supremely complicated task. I can't emphasize how hard it is going to be. It's most likely a full reopening will only start in 2023. There is a huge list of very complicated things the party will need to do to avoid future mass COVID casualties, just based on my surface level analysis:

1. Stockpile a huge amount of therapeutics, particularly the Pfizer COVID pill. Its a safe bet that there will be runs on stockpiles too considering
Please, Log in or Register to view URLs content!
, and the reaction to the now 2 ( as of 5/15/2022) toddler deaths in Taiwan, the party is going to have to distribute these meds equitably while also taking into considering which cities/villages/provinces need a higher supply due to poor medical facilities

2. A massive expansion of the medical system. The hospitalization rate in the US currently sits at 4/10,000 but has gone as high as 33/10,000 at worst. Assuming the average rate in China will be 10/10,000, COVID combined with Flu, and other incidents (car crash etc) would easily overwhelm the majority of hospital's in China especially considering some provinces only have 2 beds per 1000 residents. Living with COVID will require an entire rethink of Hospital capacity planning. COVID being not as seasonal and more severe, will mean every year you could see 2-4 major outbreaks. Roughly guessing, I think China will need as many as 8 hospital beds per 1000 residents with at least 5% being full care ICU's. This would mean a doubling of the medical system basically. A massive influx of medical students will be needed and medical schools will need to expand. A new accelerated medical license aimed directly at care for people with respiratory diseases maybe prudent.

3. Expanded worker protections to include time off due to COVID. As mentioned in the previous point, COVID being not as seasonal and more severe, will mean every year you could see 2-4 major outbreaks. This will mean that workers will need more sick time to prevent further spreading of the disease to the entire workplace and 2. as COVID can cause heart inflammation, and symptoms can hit suddenly without warning, working with COVID raises the chance of sudden death a small but unignorable amount. Forcing people to work while having COVID needs to be punished heavily. This time off should also include an extended recovery period for those suffering long COVID.

4. Massively boosting vaccine production. Every person will need either 1 booster a year or a new 2 dose regimen every 2 years or so based on the COVID mutation pattern so far. This obviously means someone needs to make them. Massive vaccination drives will need to occur regularly and health authorities will need to keep a close eye on any new variants. China will probably also have to cover a significant proportion of the global south as well.

5. Build a comprehensive national cold chain. I doubt China will continue to solely rely on inactivated virus vaccines for much longer especially with multiple MRNA candidates already in the final phases of testing. While able to achieve better protection they are much harder to transport. The Party is somehow going to have to build ultra cold storage that is accessible to every remote village, town and city in the PRC. Even if you hit 10+ million administrated doses a day, its going to take several months to vaccinate everyone and doses only last about 2 weeks to a month at freezer temps.

6. New regulations for workers working with and around animals. Spillback should be a huge concern, infecting animal populations with COVID can lead to deadly potential mutations and new variants that evade vaccines. Workers that have COVID need to be vigorously separated from the animals they work with. There is a reason why Denmark culled its entire mink population of 3.6 million when it detected COVID cases in them, and China needs to do the same for its farmed animals. This means preparing for sudden food supply chain shocks and regularly testing animal populations nationally.

There are like 4 others I can think of but I am lazy and don't want to type. Either way just opening up with zero preparation is very very very negligent. And each one of the tasks I wrote are like more than most governments do in a year. There is no possibility of returning to the pre-pandemic version of things unless somehow every country adopts a China level zero-covid policy for 1-3 months. This is going to fundamentally change how we live and everyone should know that.

You know what China has that the US doesn't? It's the ability to adapt. The reason why the US is behind when it comes to EVs is because the dinosaurs of the US don't want to spend the money for change. That's why the US is having so much trouble when it comes to infrastructure. Partisan Americans don't want money being spent to build a bridge somewhere they won't be using. People who visit a city in China one year and then a year later go back again say everything is different from when they were there before. That's because China is willing to spend the money to adapt. The US will always be behind when it comes to telecom services because they're not willing to spend the money for the next generation of services. 4G coverage is lacking in many parts of the US. 5G towers have shorter coverage meaning they'll need even more. Do the math. You know why you won't see HSR crossing the US? It's because the US wasn't the first. They're waiting for the next big thing like hyperloop but that'll never happen because it'll cost them a fortune.
You must log in or register to reply here.