the article kind of protests the US sanctioning of COSCO shipping company (this happened earlier, now googled
COSCO Tankers Go Dark
Please, Log in or Register to view URLs content!
dated 2019-10-09):
US sanctions Chinese vessels: A different method of blockade and power play
follow the link

Oh boy this upset many China haters, doubters, and naysayers out there. 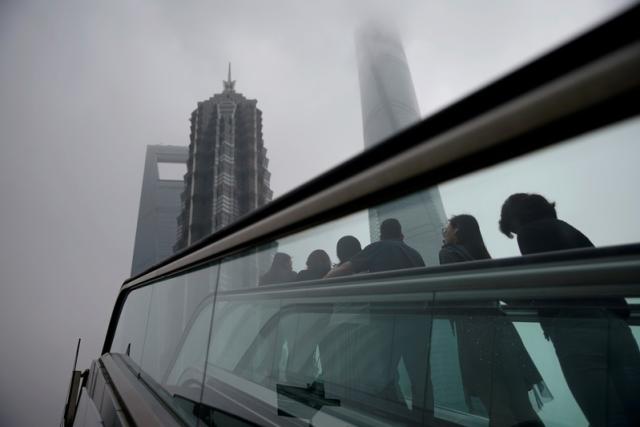 FILE PHOTO: People ride an escalator near skyscrapers at Lujiazui financial district in Shanghai
ZURICH, Oct 21 (Reuters) - The number of rich Chinese has surpassed the count of wealthy Americans for the first time as both countries keep churning out millionaires, a study by Credit Suisse showed.

The Swiss bank's annual wealth survey released on Monday found 100 million Chinese ranked in the global top 10% as of the middle of this year versus 99 million in the United States.

"Despite the trade tension between the United States and China over the past 12 months, both countries have fared strongly in wealth creation, contributing $3.8 trillion and $1.9 trillion respectively," said Nannette Hechler-Fayd'herbe, global head of economics and research at Credit Suisse.

The ranks of the world's millionaires have risen by 1.1 million to an estimated 46.8 million, collectively owning $158.3 trillion in net assets, 44% of the global total, the study found.

The United States added more than half of this number –675,000 new millionaires – to its sizeable stock.

It forecast global wealth -- which increased 2.6% over the past year -- would rise by 27% over the next five years to $459 trillion by 2024. The number of millionaires would also grow over this period to almost 63 million.

"While it is too early to say wealth inequality is now in a downward phase, the prevailing evidence suggests that 2016 may have been the peak for the near future," it said.
Click to expand...

Registered Member
Some american politicians and think tankers believe that communist china will follow the ussr in the trashbin of history, but how many rich people where in the soviet union in 1989?
L

Neither are US citizens, neither were in the US at time of arrest.

When China wants to move a Chinese citizen from one Chinese territory to face trial in China, the whole world goes nuts.

Registered Member
Great visual of how China overtake all economies (except USA) in the past 20 years!

Gatekeeper said:
Great visual of how China overtake all economies (except USA) in the past 20 years!

It would be embarrassing if 1.4 billion people can't beat 300 million. *cough India

Yes just being popular and not Western can be in itself a national security risk. And they're banning pro-China Hong Kong videos...

Remember that huge discussion we had about the future of Huawei? Well, sounds like Hongmeng is out, but the scope is now narrower. Instead of trying to replicate an entire OS, Huawei now only needs to replicate Google Mobile Services.

Yes just being popular and not Western can be in itself a national security risk. And they're banning pro-China Hong Kong videos...
Click to expand...

I was just about to post something like that. Let them start a witch hunt on TikTok or whatever popular new Chinese app that comes around. It will just make Facebook and Twitter complacent, and by the time they realize they're obsolete, the rest of the world will have already moved on.

The US is not the world, and its global market share is ever decreasing.

Registered Member
Belt and road gets acceptance in the state of Victoria, and canbara is not happy about it.

And noticed the MSM repoting on this. They always rolled out human rights, etc. Even though it is nothing about that! Figures